What is the LG Watch Urbane?

The LG Watch Urbane is the South Korean company’s third attempt at a smartwatch, following in the footsteps of the G Watch and G Watch R. With the Urbane, LG has tried to create a classic-style watch that wouldn’t look out of place in formal situations.

Replacing the G Watch R’s plastic for metal, it’s designed to be smarter-looking than the other Android Wear smartwatches on the market. However, it’s clear that LG has missed the mark. 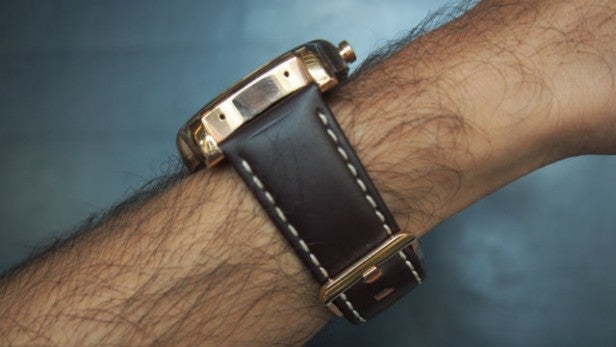 The Urbane is available in a choice of two styles: pink gold with a brown leather strap, and silver with a black leather strap. Our review unit is the gold version, and it’s not a pretty sight.

Rather than refined elegance, it oozes tackiness. It has all the character of a cheap gold bracelet jangling from Derek “Del Boy” Trotter’s wrist. The silver version is definitely the better looking of the pair, but that’s not saying much.

There are a couple of positives, however. One is that it’s round. Square-faced smartwatches, including the Apple Watch, just don’t look anywhere near as good as their circular counterparts, in my opinion. Secondly, it’s made from stainless steel. As a result, it feels substantial and reassuringly heavy, weighing 66.5g.

However, that’s about as good as it gets. The metal itself is polished to the point where it just screams, “Look at me!” The 11mm-thick main body also looks chunky and intimidating, while in fact it’s slightly slimmer than the G Watch R (11.1mm), and much thinner than the Apple Watch (11.5mm). 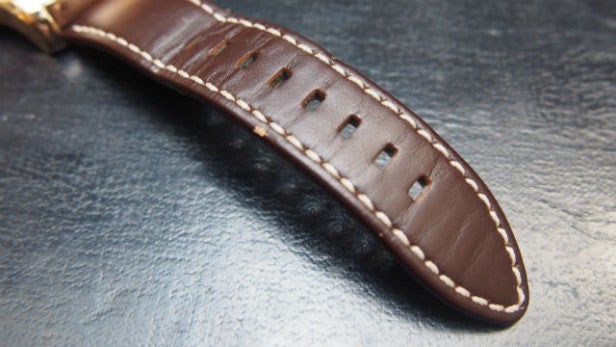 In short, it sticks out like a sore thumb. Small-wristed consumers should steer clear – the Urbane will dominate your arm, like a juicy pimple in the middle of your forehead. While wearing it outside with a t-shirt on, it was unmissable due to its brashness, and I longed for a long-sleeved shirt to cover it up.

On the right of the body sits the power button, in the guise of a traditional watch dial. It offers enough resistance to stop you from pushing it accidentally, but not so much that you’ll struggle when you do want to press it. However, it sticks out a lot and sometimes digs into your skin. Hidden around the back is the light-based optical heart-rate sensor.

The genuine leather straps that come with the Urbane are initially quite rigid and irritating, but become a little friendlier after a few days. It’s still not the most comfortable smartwatch to wear, due to its size, though you have the option to swap the straps out for any 22mm industry-standard watch band of your choosing.

However, it looks like you’d have to do this whether you like it or not. Within just a week of receiving our review sample, we noticed chips and deep, ugly ridges appearing on the notched portion of the strap. 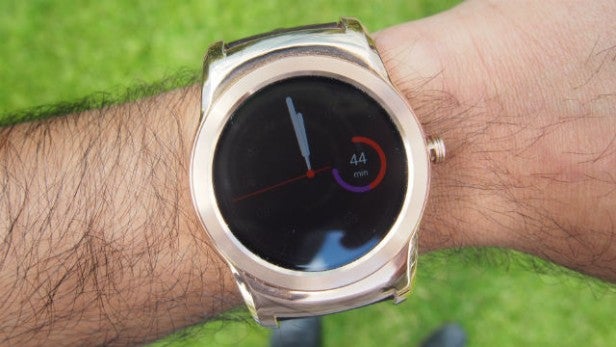 Fortunately, the display is a far better affair. The Urbane makes use of the same 1.3-inch, 320 x 320 P-OLED display as the one on the G Watch R, and it’s an impressive panel. Unlike with the Moto 360, it’s fully-round too, without that horrible ‘flat-tyre’ effect at the bottom of the screen.

With a pixel density of 245ppi, it lags a little behind the Apple Watch’s display in terms of size (1.7-inch) and clarity (322ppi). However, it’s still a touch sharper than the displays of the 13-inch MacBook Pro 2015 and new 12-inch MacBook (227 and 226ppi, respectively), both of which we were happy with.

Colours are nice and vibrant, while contrast ratio is also impressive. At maximum brightness, it’s just about clear enough to use in direct sunlight, though we’d prefer another couple of brightness levels. The handy Power Save mode, meanwhile, ensures the screen doesn’t suck up too much power, even if you set the display to be always on. It automatically dims and simplifies the screen when you’re not using it, displaying only the watch hands so you can tell the time.

It’s noticeably not as responsive as a smartphone screen, however. We found some of our swipes register as taps and vice versa. It’s not a crippling issue, but it makes navigation a little tougher than it should be.

The bezel running around the screen is super-thin and barely-noticeable if you opt for a dark watch face. Meanwhile, the entire panel comes protected by a layer of Corning Gorilla Glass 3, which should ensure it withstands everyday scratches and scrapes. 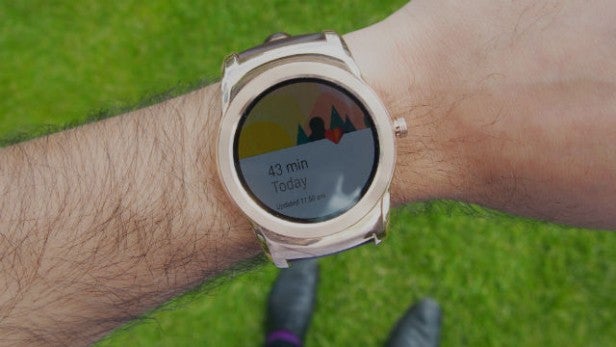 In terms of features, it’s a very similar setup to that seen in the G Watch R. There’s that familiar 9-axis configuration designed to track your movements and speed, comprising a gyroscope, accelerometer, barometer and compass. There’s no sign of GPS though, presumably for battery life purposes.

Pressed against your flesh is the optical heart rate sensor, which measures your pulse by shining a green light at your blood vessels. However, we’re not totally convinced with its performance and accuracy. A resting measurement of around 60bpm seems fairly reliable, though it only detected 119bpm immediately after a particularly intense round of exercise.

Out of curiosity, we placed it flat against a wooden desk and fired up the sensor – the reading was 71bpm.

Since it’s IP67-certified, it’s water and dust resistant, though this doesn’t mean the Urbane would survive a swimming pool or mud bath. At best, LG says it would withstand being submerged in water for about 30 minutes, down to 1m. The user guide specifically warns against putting into contact with salt water, sand and mud. 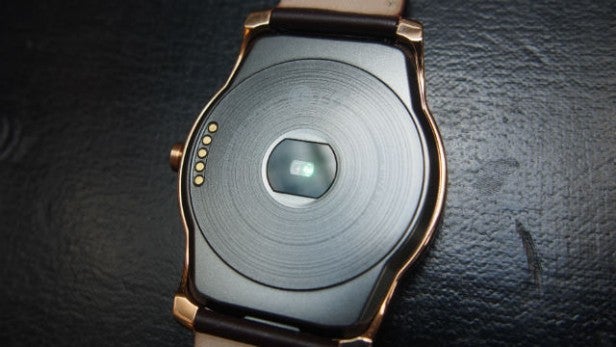 You can wear it while doing the washing or taking a shower, though the screen becomes almost completely unusable when wet. Despite trying for the best part of 10 minutes, I was unable to do something as simple as swipe through notifications while in the shower, whereas the water spray somehow managed to alter my alarm and display settings.

You can connect the Urbane to any Wi-Fi network listed on your smartphone, though this sometimes disconnects automatically if you’re low on battery. It’s annoying when this happens, since fast access to notifications is one of the main strengths of a smartwatch. However, Bluetooth 4.0 allows you to sync information with your phone in real time when you’re out and about. A little vibration motor buzzes whenever notifications come in, making it tough to miss them.

As long as you’re connected to your phone, you can make calls from the Urbane, though you do attract a lot of attention and end up looking more geeky oddball than James Bond. The in-built microphone is good at picking up your voice in quiet surroundings, but struggles when there’s any amount of background noise.

Running the show is a 1.2GHz Qualcomm Snapdragon 400 processor, paired with 512MB of RAM. It’s a powerful enough setup for the watch, but we did at times notice some lag when swiping between screens. The 4GB of internal storage is there for offline music playback purposes, but you’ll require a Bluetooth headset, since the Urbane doesn’t have its own speakers.