Available on PS4 (version tested) Xbox One, PC
The original Mirror’s Edge did its utmost to define first person platforming when it launched in 2008. In many ways it succeeded and offered never before seen parkour movement mechanics in a beautifully minimalist sci-fi landscape. Catalyst tries to reboot the idea, transposing the game to an open-world structure, but despite scattered cool moments, it stumbles.

You play as Faith Connors, the original game’s protagonist. In a short introduction, she’s let loose from prison for undisclosed offences, before returning to doing what she does best; running across rooftops in the futuristic city of Glass while fighting the totalitarian KrugerSec group and completing side jobs to repay her mysterious debt.

Faith’s troubled past is a central part of the game. EA wants you to care about Faith and tries to portray her as a strong but troubled heroine who is resilient, stubborn and determined. Several flashbacks to her childhood throughout the game also work hard to make you sympathise with the emotional trauma she’s experienced. But all too often it feels shallow, unhelped by Faith’s questionable decision-making that leaves her completely unlikeable.

Faith’s companions are similarly empty. They’re well acted and have silly sci-fi names like Plastic and Icarus, but they have no depth and soon become nothing but vessels to give Faith her next mission. It means that the game’s plot developments aren’t nearly as emotionally effective as the game thinks.

What do we think will happen at E3 2016? Watch our predictions

Faith and her companions aren’t the only part of Mirror’s Edge that feels empty. The game’s story focuses on Faith’s struggle to stop KrugerSec’s boss from activating a nonsensical computer virus called Reflection, which will manipulate the emotions of the general public. The main problem is that you don’t see any civilians throughout your entire time playing Catalyst, so you have no context for what it is you’re trying to save. As a result, the vox populi rebellion angle simply doesn’t work. 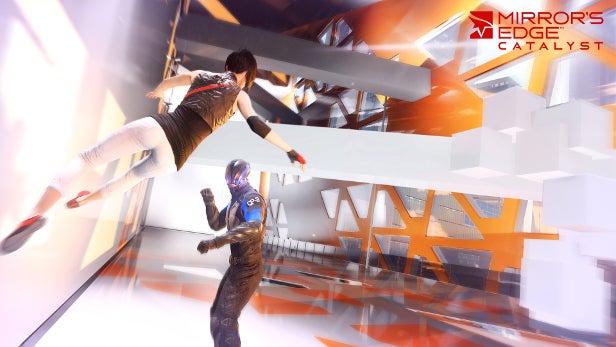 However, you cannot deny Catalyst’s beauty. The city of Glass is pristine; billboards flash with block colour, entire skyscrapers shimmer a blinding white, the brilliant blue sky becomes a deep navy as day turns to night. For all Mirror’s Edge’s feeble storytelling attempts, Glass is a true wonder, and one of the best representations of an aspirational dystopia I’ve ever seen.

Like its predecessor, Catalyst’s greatest strength is its free-form, fast-paced movement. Faith’s abilities start strong and get better as you earn experience points to upgrade skills, with one button to hop, slide, jump, swing and wall-run your way from place to place, with intermittent environmental puzzles like tight ropes adding further complexity into the mix. For the most part, it works excellently, and is at its best when you’re out in the open leaping between rooftops, launching up walls and swinging across enormous gaps in buildings.

Related: PS4 Neo – Everything we know

But traversing confined spaces – legging it down corridors, or sliding over the art installations in a modernist gallery – is less fun. The one button aspect of the game’s platforming means that Faith doesn’t always do exactly want you want her to. It’s infrequent, and far less of an issue than it is in something like Assassin’s Creed Syndicate, but it can be frustrating and I found myself wanting to be back in the open where I could truly flex my abilities.

The pathfinding, which highlights your best route to any marked location by making the environment glow red, is also a little hit and miss. For the most part, the feature is a great way to find out what you can and can’t interact with, but it doesn’t always work. This means you have to stop in your tracks and take 20-30 seconds to find the red route again. In a game that thrives on speed of movement, halting momentum isn’t fun. 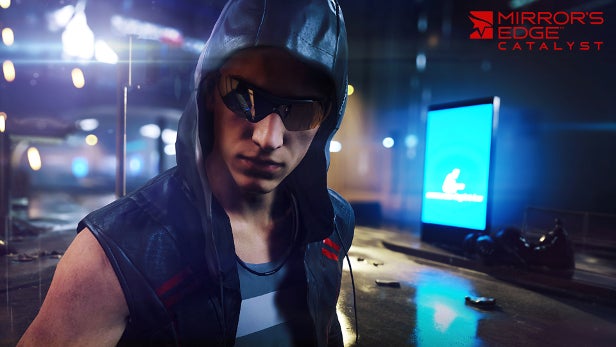 Catalyst’s best moments – a tense data heist, an art gallery break-in, and a stunning skyscraper ascension – have very few of these annoying interruptions, and create a really satisfying rhythm. There’s a real weight to Faith’s movements; her arms and legs constantly appear on screen, and you can hear Faith grunting as she slams down onto hard ground. The acrobatics as you string together a double wall-run, or zip speedily up an elevator shaft, are unparalleled in creating the sense that you are guiding a real person through this world. The nail-biting moment as you make a large jump, only to grab the other side and almost fall, the camera swinging round to look down to the streets below is wonderful.

But for every cool moment there are a series of frustrations. The combat is a particular problem, and for a game that thrives on the exhilaration of momentum, its fighting has no fluidity.

Light and heavy attack options are coupled with a dodge ability, which allows you to evade punches, kicks and grabs. Later on, enemies with guns appear, then foes carrying electrically charged batons that can send you flying if hit. Alone, these foes are fine to fight. They’re not particularly interesting, but manageable, and the game makes a point of teaching you to use the environment to your advantage as you sprint past to push enemies off the side of walkways, or into one another.

But too often the game forces inescapable scenarios in spaces where you’re unable to build up momentum, and then throws increasingly large waves of enemies at you. At best it’s annoying, and at worst it’s truly unpleasant and will slow the action to a shoddy standstill. Eventually, combat just devolves into senseless button mashing as you become more and more frustrated with each unfair death.

Related: Everything we know about Battlefield 1 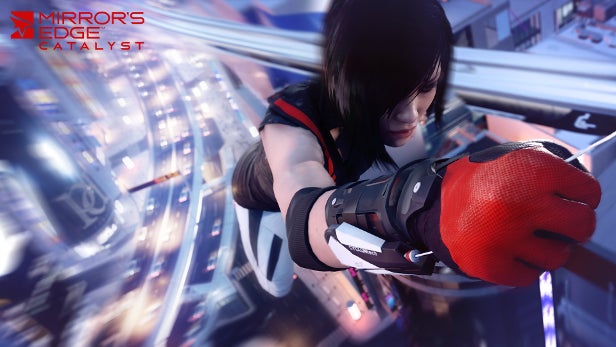 There are three or four key points that this becomes a game-ruining experience. The final boss fight is particularly awful. At the end of a brilliant final mission, you’re forced to fight two of the game’s hardest enemies simultaneously. Even with my combat skill tree almost maxed out, this fight was all but impossible. Across several fist-bitingly frustrating attempts, I saw Faith get stuck in an endless loop of being kicked to the floor by one bad guy, before getting up and being kicked back down by another. On another attempt I defeated one enemy only to fall afoul of the game’s baffling hit detection, which meant I got killed despite standing five feet behind the boss.

There are also a couple of minor instances outside of combat where chance overrides skill. While climbing a skyscraper at the end of the game, a glass walkway begins to crack and fall through. What should be a simple run from point to point results in over seven attempts to progress, experimenting with running, jumping, wall-running and any combination of the three. Once I’d finally, desperately, reached solid ground, I had no idea what I had done differently to succeed. It was relief I felt, not satisfaction. These moments are few and far between when you’re exploring the world, but still become a hindrance to a game that’s all about speed and fluidity.

At its core, Catalyst’s expansion to an open world is a misfire. While side objectives like time trials, dead drops and an entire asynchronous multiplayer functionality make for a longer playtime, it comes at the expense of refinement. Catalyst’s direction feels like the opposite of what people have been quite explicitly asking for since the original game came out. As a result, while its breathtaking leaps and adrenaline filled ascents are great in their own rights, Mirror’s Edge feels like it has spent the last eight years standing still rather than moving forward.