Available on Xbox One, PS4 (reviewed) and PC
For the first time, the roof-scrambling, hidden blade-wielding series is tackling Victorian London with Assassin’s Creed Syndicate.

We’d argue that its a Victorian London more reminiscent of Guy Richie’s Sherlock Holmes movies rather than one of Dickens, Oscar Wilde and George Bernard Shaw.

Syndicate is a tale of dark conspiracies, violent gangs, child labour and heavy industry that succeeds in mixing up the well-established Assassin’s Creed formula and introducing a well-needed breath of fresh life.

Not only is Syndicate taking Assassin’s Creed to a new location, it’s also the first to have two protagonists. The story stars twin assassins called Jacob and Evie Frye.

Evie is calm, stealthy, intelligent and proactive, and might just be the most likeable lead since Ezio.

But, Jacob is the most instantly dislikeable (apart from perhaps Connor Kenway), he’s bold, a wannabe bad boy, cocky, arrogant and sure of himself to boot.

Related: 22 breathtaking London landmarks you have to climb in Assassin’s Creed Syndicate 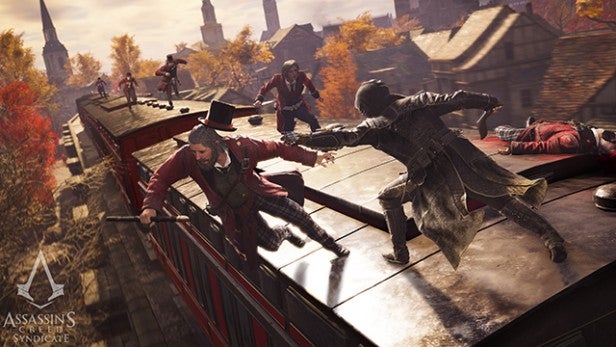 The twin protagonists are reflected in a splitting of objectives and game styles. In Syndicate, Victorian London is the centre of the world and it’s dominated by the Templars on every level. They control industry, run the establishment and even command the London street gangs, all the time searching for the all-powerful pieces of Eden and – worse – for applications for their power. Jacob’s intent is to tackle the Templar’s power at street level, building a new gang, the Rooks, to fight the Templar’s chosen gang, the Blighters, taking them out borough by borough, territory by territory. Evie, meanwhile, is chasing the pieces of Eden. She favours working from the shadows, finding out what the Templars are up to and beating them to the prize.

In actual gameplay terms this gives you two sets of missions, with a string following Evie’s search and her battles against high-ranking Templars, while in the background you’re engaged in gang warfare, both through story-based missions and a repeated set of activities.

As well as clearing strongholds of Blighters, you’ll find yourself kidnapping leading thugs and delivering them to Inspector Abberline of Scotland Yard, or simply murdering others to take them out of the picture. You can weaken the Blighters’ grip by rescuing poor urchins from enforced hard labour, too. Clear a borough of all gang objectives, and you’ll find yourself in a climactic gang-battle with the local Blighter boss. In truth, it’s more like a post-pub scrap than Gangs of New York, but defeat the boss and another borough’s yours. 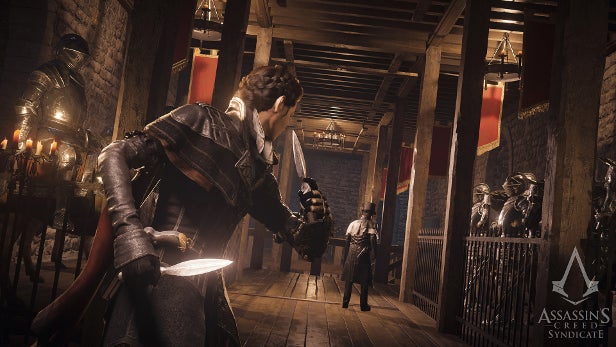 Wisely, Syndicate doesn’t restrict you too much in terms of which twin you use. There are some missions where you have to play as Jacob or Evie – and where the game will actually switch you automatically – but in many cases it’s just a case of how you like to play things. Jacob has health and extra damage on his side, but Evie is faster, stealthier and, in a way, more brutal.

Don’t go in expecting a gangland sim. This is still primarily a game of stealth, rooftop-running, climbing and close-quarters combat, and while you can recruit a couple of Rooks to help you on a mission, there’s no-one else to do the dirty work but you. On the other hand, you do get a cool travelling HQ on a moving train, plus the means to earn cash and upgrade your gang members, making them tougher in combat, giving them new equipment and capabilities or ensuring they’re a bigger presence in handy carriages on the London streets. 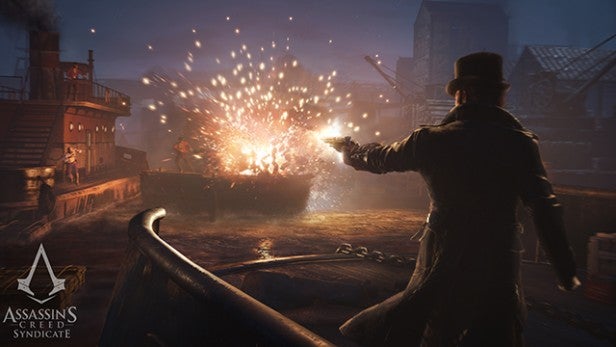 The carriages are a big thing here. Not only can you grab or hijack one to get you from A to B in half the time, but certain missions – and all kidnap missions – involve speeding away from pursuing Blighters with their own wheels to use. This is a lot of fun in short doses, as you weave your way through the horse-drawn traffic, side-swiping or shooting the enemy to wipe them off your tail, with responsive controls and all those great London sights to speed on past.

On top of all this stuff you’ll find your duo meeting up with some of the greats of Victorian society and innovation, including Charles Dickens, Charles Darwin and Alexander Graham Bell. Admittedly, Darwin is oddly spry for a distinguished elderly scientist, and his appearances aren’t the only time I felt like I might be playing a Horrible Histories Victorian game. Syndicate scores surprisingly well for period atmosphere and detail, from its penny dreadfuls to some surprisingly well-researched speech, but the accents can be dodgy or overblown, while bystanders still seem oddly oblivious to your activities, as if there’s nothing more natural for the average factory worker than a hooded woman prowling around the catwalks, leaping down to stick a blade in your supervisor’s throat. 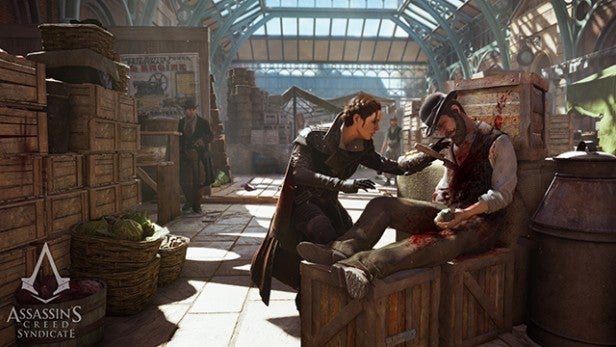 Meanwhile, there are all the usual chest to discover and collectibles to grab, plus numerous gang-related side missions and ad-hoc street missions to complete. PS4 players even get a set of murder mysteries to solve, interviewing suspects and using Eagle Vision on the crime scenes to work out who’s responsible for the evil deed. There’s not much more to these but they’re still entertaining, even if it’s a bit rich to be slaughtering Blighters by the dozen one minute, then accusing someone else of murder the next.

Syndicate is a big, meaty, Assassin’s Creed game, harking back to the glory days of Assassin’s Creed: Brotherhood. London is huge – a larger open world than Unity’s Paris – and crammed with stuff to do. What’s more, the main systems have never been slicker. Combat is fast-paced and challenging, with a lot of emphasis on counters, but you can use the upgrade system to make your life easier, and the game cleverly tags opponents and missions so that you can gauge whether you’ve levelled-up enough to take them on. The core climbing and parkour stuff is cleaner than it was in Unity, too. While you’ll still find yourself accidentally clinging to a building when you’re meant to be dashing towards a timed objective – a perennial problem for assassins – it doesn’t happen quite as much. 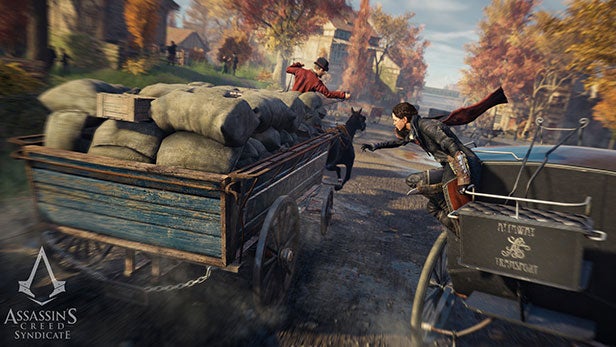 It’s a beautiful game, as well. I’m not sure Victorian London is always as pretty or lovingly detailed as Unity’s Paris was, while population density seems to have gone down, yet the game manages to capture both the industrial squalor at one end of the social scale and the pomp and grandeur at the other, and it’s hard not to love a game that lets you clamber up Big Ben, the Houses of Parliament and Hawksmoor’s churches, then drive a carriage without due care across the Thames. Atmospheric rain effects and a genuinely striking chamber music sidetrack only up the effect.

Yet while I like Syndicate – and like it a lot – I’m not 100% convinced. Partly it’s a structural thing: the game is at its best when it clamps onto the storyline and Evie’s quest, but to get to the next stage of the storyline you have to wade through all the gangland stuff, which gets repetitive as time goes on. There has always been a lot of busywork in Assassin’s Creed, but Syndicate makes a real meal of it and a lot of what used to be optional isn’t so optional here. This only draws more attention to the fact that Syndicate is still, at heart, full of the same old stuff you’ve been doing since the original Assassin’s Creed. If you were tired of the core gameplay already, Syndicate’s twists won’t revitalise your interest. 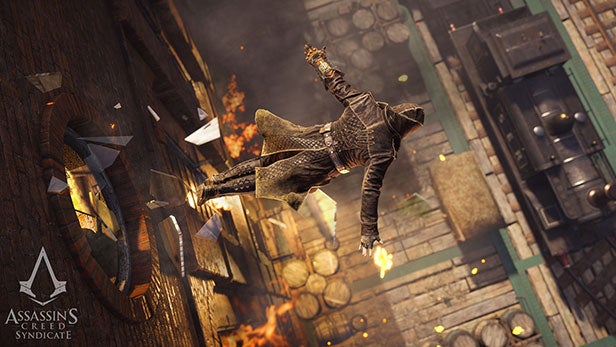 It can also be over-convoluted. For example, not only do you have separate skill trees for Jacob and Evie but separate upgrade systems too, plus an additional upgrade system for your gang and a whole scavenging and crafting thing on top of that. Ubisoft is often accused of mistaking systems for content, and Syndicate can feel like a case in point. You want to crack on with the action, but the game wants you to do your homework first.

Overall, the good stuff wins out and, whatever else you can say about Syndicate, it’s nowhere near as glitch as Unity or AC3 was at launch. I have seen the odd visual glitch and some occasional, terrible slowdown, but nothing really embarrassing. I might have just been lucky, but I’ve been playing with retail code and a Day One patch, so I’d hope that’s not the case.

Verdict
Big, beautiful, rich and atmospheric, Syndicate feels like a return to the glory days of Assassin’s Creed: Brotherhood, where systems and story came together to produce something brilliant. The gameplay that was growing stale remains so while all the gangland stuff can bog things down, but Victorian London seems to suit the series and allow it to play to its strengths.