The net result is the Surface 2’s screen isn’t as sharp as its nearest competitors, but it won’t have a hugely detrimental effect on your enjoyment. The difference is most obvious on the Start screen, where text has a very slight jaggy quality you won’t see on any of the above rivals. The tile-based UI hides this weakness rather well, though, and text appears sharper in Word and other ‘desktop’ apps (basically Office, Internet Explorer and legacy Windows apps like Word Pad) thanks to Windows’ ClearType text rendering system, which isn’t in use on the tablet side of things. 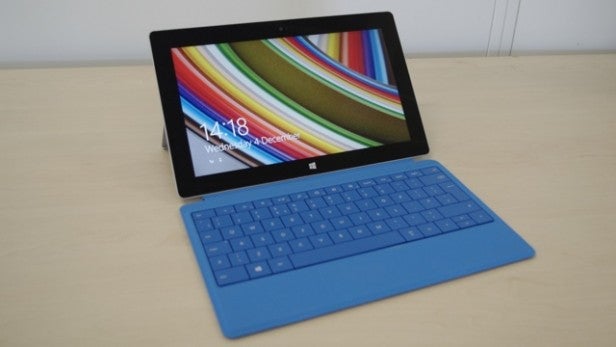 Colours and contrast are very good

The difference in sharpness, then, is visible but not serious, and the Surface 2’s screen is just as good as the best tablets where colour, contrast and brightness is concerned. The peak brightness is high enough to be blinding in dimly lit rooms, and if anything the contrast and black level is ever so slightly better than the iPad Air. Moreover, the Surface 2 doesn’t appear to suffer from the irritating dynamic contrast brightness shifts seen on the Surface Pro 2.

All these factors and the natural 16:9 aspect ratio make the Surface 2 excellent for video viewing, especially compared to the 4:3 aspect iPad Air whose viewable area in widescreen films is noticeably smaller.

This makes the puny speakers all the more irritating. There are two of them, so at least they’re stereo, and unlike the iPad Air they’re positioned either side of the screen to create some semblance of a stereo effect, but they’re way too quiet for serious video or music viewing. They’re embarrassing compared to the iPad Air and the excellent speakers on the latest Kindles. It’s a serious weakness. In fact, they’re quieter even than the mono speaker on the iPhone 5s. 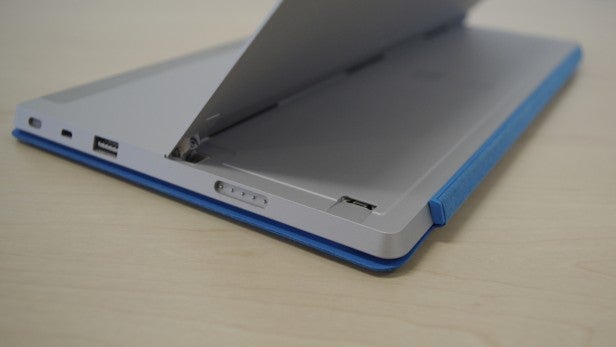 The memory card slot (right most slot) is discreetly tucked away

So many column inches have been expended on the topic of Windows RT that it’s hard to know where to start. For the uninitiated, Windows RT is a paired back version of Windows 8. You can’t install desktop apps, but it comes with: a version of Microsoft Office that runs in a desktop; desktop and a tablet versions of Internet Explorer; and all the assorted accessory apps that Windows has shipped with since time immemorial.

In the name of brevity we’ll settle for pointing out this setup is no less confusing now than it was last year, and for all the noises coming out of Microsoft recently it seems we’re stuck with it for now. It still feels like an awkward compromise, it still feels incomplete, it still feels like step one in a greater plan, and there are still too many occasions where you have to resort to the desktop to find things, such as to check how much storage space you have left. 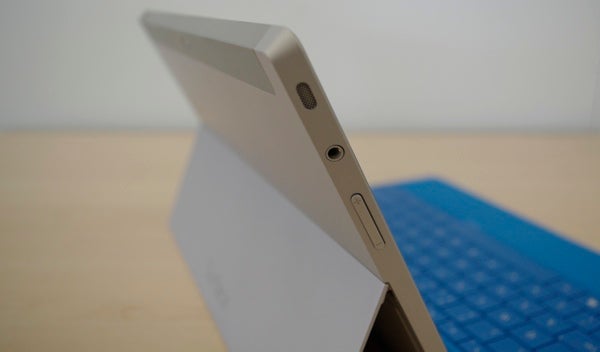 Headphone jack and volume controls are on the left edge

Of course, the Surface 2 runs the Windows 8.1 variant of RT or Windows RT 8.1 to give its full title. This brings with it several neat improvements and new features, such as smaller tiles, better organisation of apps and a new search feature that hooks into Bing to create a very cool touch friendly search experience. You can read all about these changes in our Windows 8.1 review, but suffice it to say we approve of them.

Office RT 2013 sees Outlook added to the roster, too, joining Word, Excel, PowerPoint and OneNote, which will no doubt please anyone wedded to corporate email. Office on the Surface 2 isn’t a custom ‘touch experience’ but rather ‘touch enhanced’, with most of the UI elements given extra padding to make them accessible on a touchscreen. It’s great to have the full Office experience on something as thin as light as this, but the tablet experience is (mostly) adequate rather than exceptional and there are still places where icons feel too small for comfort. There’s also the added confusion of having desktop and tablet versions of OneNote.

Office is clearly the Surface 2’s best selling point, but beyond this the Windows Store is still sparsely populated. Some big hitters are on there, but there’s very little going on beyond that. Moreover, we encountered one bizarre app breaking problem with the Netflix app where it refused to play videos when headphones were plugged in, throwing up error messages suggesting we update drivers and the like. It’s the kind of problem you just won’t encounter on an iPad or Android tablet.