What is the Microsoft Surface 2?

Microsoft has two styles of tablets: full Windows 8 hybrids like the Surface Pro 2 and Asus Transformer Book T100 that run desktop apps; and low-power, ARM processor-based Windows RT tablets that come with a ‘touch friendly’ version of Office running in desktop mode, but which can only install and run tablet apps from the Windows Store.

The Surface 2 falls into the latter category and usurps the Surface RT from last year, though the latter remains on sale at a knock down price. It shares the basic design of the Surface Pro 2, but it’s lighter, cheaper and has longer battery life. What’s the real difference? Well, where Windows 8 tablets want to replace your laptop or PC, the Surface 2 wants to give the iPad Air and its kin a bloody nose by making you more productive. 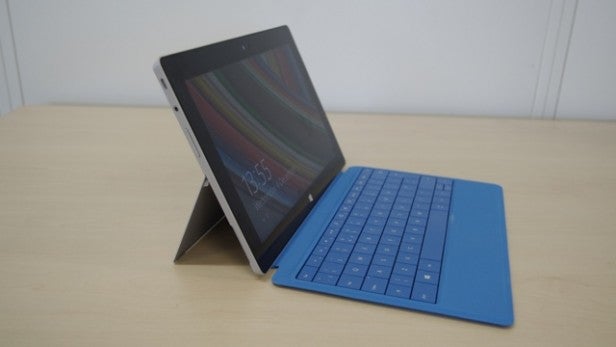 This is the taller of the two kickstand levels

The keyboards clip very securely to the bottom of the Surface 2 and combine with the built-in kickstand so you can comfortably set the Surface 2 down on a desk and start working. It’s here where the first changes to the Surface 2’s design become evident. The kickstand, which used to have one very steep angle, now has two angles: a tall one that isn’t quite as extreme as before and a flatter one that ensures the screen actually faces you when it’s set down on a desk. 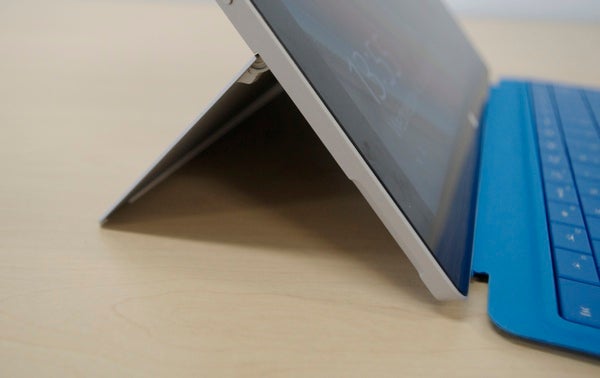 The new flatter angle is much easier to use

Elsewhere, the changes are pretty minor. The Surface 2 is marginally slimmer (8.9mm thick vs. 9.4mm) and marginally lighter (676g vs. 680g) than the Surface RT, but not enough that anyone will notice. This makes the Surface 2 very much a two-handed tablet as it’s too heavy and the 16:9 aspect screen feels a bit tall and awkward when held in portrait. 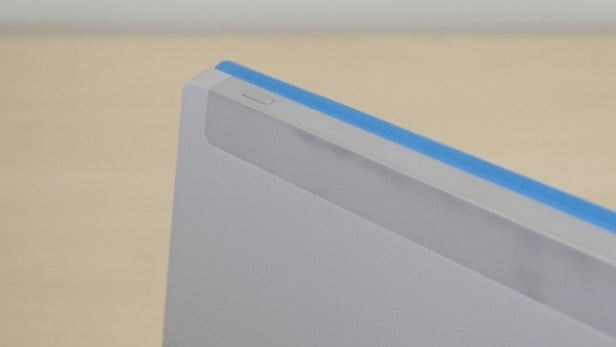 Note the darkened patches along the top edge

The only other noticeable visual difference is the finish, as Microsoft has ditched the dark grey painted finish to the bare silver metal below it. This helps distinguish the Surface 2 from the Surface Pro 2, but also gives the Surface 2 a slightly coarser texture that we’re not huge fans of. It’s something you’ll get used to in time, but it lacks the refinement seen on the iPad Air.

Indeed, while the Surface 2’s build quality and design is very good in most places, there are one or two places where the attention to detail isn’t quite up to it. The plastic segment at the top that contains the wireless radios leaves a couple of unsightly joins on the top edge that aren’t as seamless as we’d hope, while the slightly darker silver paint applied to it appears to have started rubbing off on our review sample. Neither are deal breakers, but they’re niggling irritations all the same. 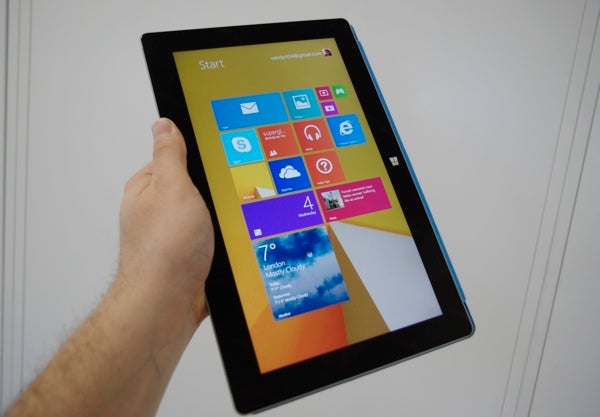 The Surface 2 is a tad unwieldy when held in portrait

The basic connectivity on the Surface 2 remains much the same as before. There’s a single, full-size USB port, but it’s now 3.0 port rather than a 2.0 one. There’s a single Mini HDMI output and a 3.5mm headphone output, but the most important addition is the microSD card slot. That’s because, although advertised as a 32GB tablet, after the OS and recovery partition there’s only 16GB or so of space left. Investing in a card is a good idea.

Microsoft has upgraded various other parts of the Surface 2. It now uses a Tegra 4 processor, a quad-core chip clocked at 1.7GHz. There’s still 2GB of RAM, but the two cameras are much improved from two 720p resolution cameras to a 5.0MP camera on the back and a 3.5MP camera on the front. Microsoft has added a second mic at the rear, too, adding active noise cancelling to improve video chatting performance.

The final upgrade is an important one: the screen. The Surface RT had a rather disappointing 1,366 x 768 resolution, but the Surface 2 has a 1,920 x 1,080 resolution screen. This doesn’t make this a ‘retina’ screen in the popular parlance, but it’s an important and necessary upgrade that sets the Surface 2 apart from potential rivals like the Windows 8-based Asus Transformer Book T100, which still has a 1,366 screen.