This is the long awaited update to arguably Microsoft’s most ambitious and controversial operating system to date, Windows 8. In previous generations it would’ve been referred to as a Service Pack, but these days the trend is for decimalisation.

Its task is arguably as difficult as the initial challenge of building Windows 8: merge two individually admirable but jarring OSes, the traditional desktop and ‘Modern UI’ for touch. 8.1 also needs to fill gaps in the finger friendly ‘Modern UI’ that forced you back to the desktop and take the edge off some of the desktop’s more eccentric elements. Yes Start button, we’re looking at you. 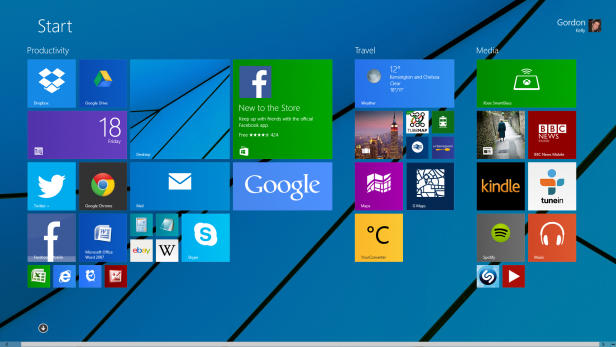 The days of Windows Update are long gone as Microsoft has neatly folded OS updates into the Windows Store and users are automatically prompted to update. The download process (clocking in at a hefty 3.4GB for the 64-bit version and 2.1GB for the RT edition) thankfully takes place in the background, only stopping you from working when it is time to install. 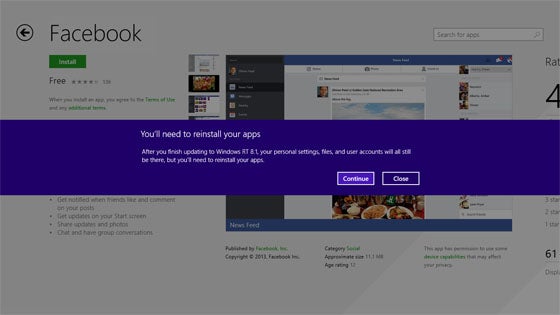 This is a lengthy process (a pair of laptops and a high powered desktop took between 20 and 40 minutes to complete) but for Windows 8 users it is seamless returning you to everything as you left it. If, like us, you have been using the Windows 8.1 Preview, however,  you’re in for a nasty surprise. You will be informed your ‘apps’ must be reinstalled after the update, the problem being this is ‘apps’ in a post-Apple App Store world.

What Microsoft really means is your Modern UI apps will need to be redownloaded, but what you have will be remembered and this is a minor inconvenience. More crucially all desktop software and its preferences will be removed for beta testers so you’ll need to go through the process of reinstalling everything from Chrome to Spotify. All our third-party drivers did continue to work, but it is worth remembering beta testing nearly always carries a price. 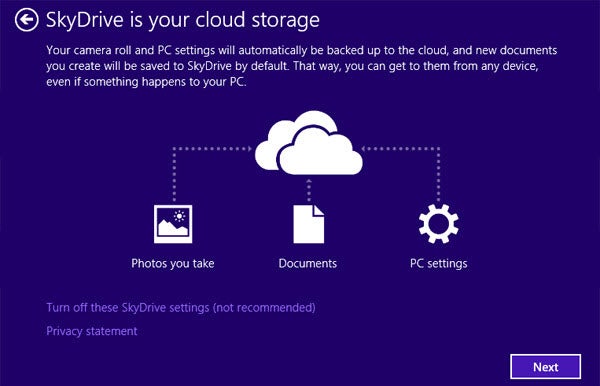 During our upgrade process the desktop installation failed, but safely reverted to Windows 8. The laptops encountered no problems and the desktop installed without a problem at the second attempt. We haven’t seen widespread reports of upgrade problems so we’ll assume this was a rare occurrence until we hear differently. Let us know your experiences.

Once up and running you are treated as if you’re running the OS for the first time and, given the changes made, this is no bad thing. You will be asked to choose your colour scheme (a wider range is now available), login and re-verify your Microsoft account via email or SMS (you don’t need an Outlook address) and setup SkyDrive. Users are then put through a navigation wizard to explain design modifications and basic navigation including how hot corners work. If you get stuck there is also the new ‘Help Tips’ app, but more on that later.

Of the design changes, the biggest come to the Modern UI. Your first boot will take you to the contentious start screen (though you can now choose to go directly to desktop) and it is worth pointing out boot times are just as fast, if not faster than Windows 8. Machines with an SSD will get there in 10 to 20 seconds and anyone running Windows 7 need not fear their machine will slow down with an upgrade. If anything it is likely to speed up. 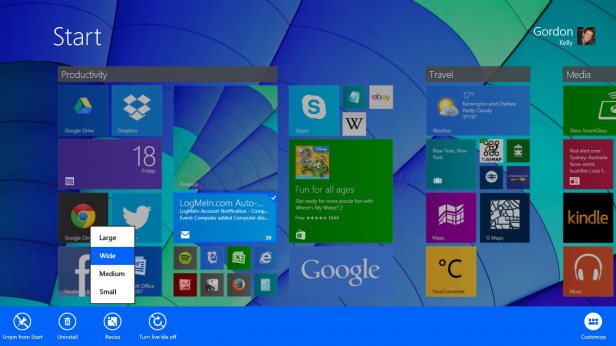 Once into the start screen the first thing you will notice is it is more like Windows Phone than ever. This is primarily due to the introduction of two new tile sizes ‘small’ and ‘large’ which are added to ‘medium’ and ‘wide’. You can fit no less than 16 small tiles into the size of the large tile allowing for more creative layouts and better fits with both tablets and extra large monitors and multi-monitor setups.

The tiles themselves also look better. The Windows Store tile is animated to provide app recommendations, the Weather tile can display up to three days of forecast and the Calendar app will show your schedule. For the first time tiles for desktop apps can also be animated, which in time should further improve aesthetics. Another nice touch is the introduction of animated backgrounds that take their visual cues from Android’s sliding homescreens. 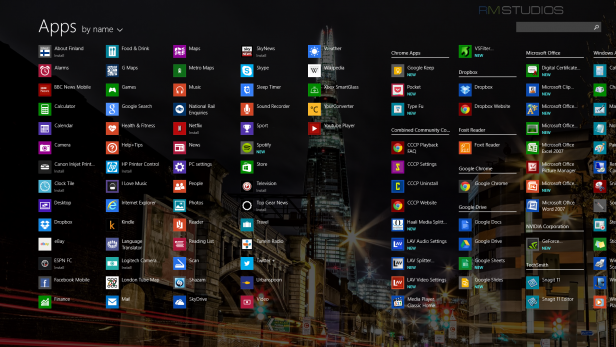 The next major change is the introduction of the ‘All apps’ view. This drawer lives up its name by showing everything installed on your computer or tablet with a simple swipe up on the Start Screen. Those without a touchscreen can call it up using Ctrl Tab. Again, Android and Windows Phone are the obvious inspirations here as mobile OSes continue to influence PC platforms far more than vice versa. 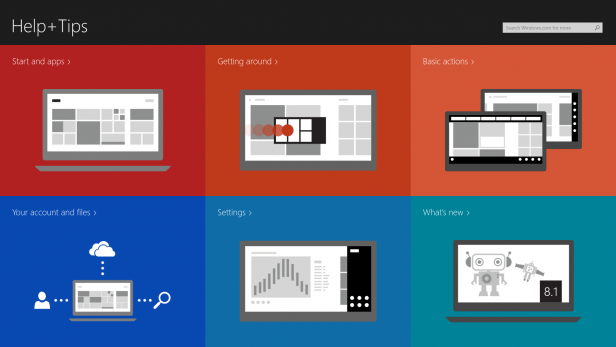 For anyone still confused by the changes, Microsoft has introduced the useful ‘Helps Tips’ app. This breaks down into six convenient sections: Start and Apps, Getting Around, Basic Actions, Your Account and Files, Settings and What’s New. It is well-designed and quite frankly something that should’ve been in Windows 8 when the radical changes from Windows 7 were at their most confusing. We’ll give Microsoft credit for correcting its mistake, but a mistake it was.