What is the Microsoft Lumia 640 XL?

The Microsoft Lumia XL is essentially a super-sized version of the Lumia 640. It has a huge Note 4-rivalling 5.7-inch screen, more megapixels and a bigger battery to play with than the smaller 640. Elsewhere, it’s much of the same. It runs on Windows Phone 8.1 Denim, comes with 4G and features the loudest look you can find on any smartphone right now.

Priced at £219 SIM-free, the phablet is competing with the likes of the Huawei Ascend G7 and the Alcatel One Touch Idol. That also puts it firmly in OnePlus One pricing territory.

If having a cheap phone with a massive screen is a priority, we’d say there are better options out there. If you’re specifically after a Windows Phone, then the 640 XL will have some appeal, but you could save some money going for the 640 and not miss out on a great deal features-wise.

The 640 XL is a big phone. We’re talking in the Nexus 6 realms here. If people don’t notice it when you pull it out of your pocket, then they’ll most certainly spot it if you go for the model with the almost neon orange case. There are more conservative colours to go for instead, but the combination of the two make it a little embarrassing to take out and make a call.

It’s hard work using this in one hand as well. At 9mm thick, it’s slightly chunkier than the 640 (8.8mm), and about the same width across as the Nexus 6. Stretching your thumb to the side of the screen is impossible for the average-sized hand.

It’s a shame really, because Microsoft does a sound job with the build quality. There’s no creaking in the plastic design and no annoying gaps in between the screen and the trim to trap dust and pocket fluff. The blocky look is minimal and we like it. Microsoft has opted against physical buttons below the screen, while the volume rocker and standby button are easy to reach when gripping the handset. All that’s left is the headphone jack on the top edge and the Micro USB charging port on the bottom edge. 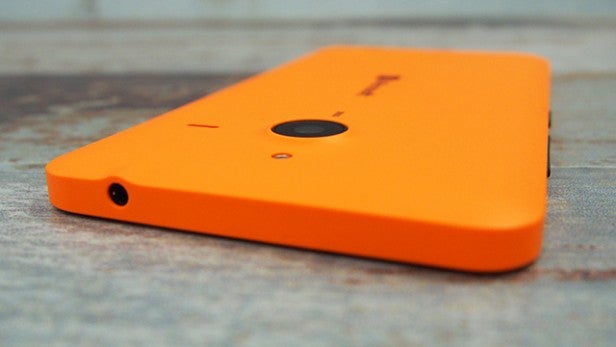 The brightly coloured removable back has an entirely different finish to the glossy one on the 640 and it’s a good change. It’s the same matte plastic as the Lumia 930, and it’s much nicer to grip than the smaller 640. The Microsoft logo, the tiny speaker and slightly protruding camera lens are the only things breaking up an otherwise streamlined body.

Behind the clip-on back lies the 3,000mAh battery, which is removable if you like the idea of carrying around a spare. Unlike the 640, there’s no wireless charging support, but that’s not a massive loss when you consider that charging rates are still pretty slow in comparison to simply plugging it into the mains.

There’s also a Micro SIM card slot and a microSD card slot, which will come in handy when you discover there’s considerably less than the advertised 8GB onboard storage to play with. Microsoft is offering dual-SIM options as well, but the second port on our model was blocked up, so it’s likely to be offered in different territories.

If Microsoft had dealt with the jump in size a little better, we could almost live with the high-vis paint job. That’s because elsewhere Microsoft has kept things simple. From a practicality point of view, though, it sadly doesn’t really cut it. 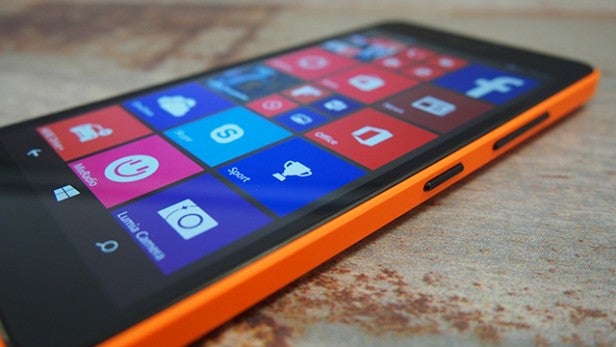 The Lumia 640 XL is packing a flat 720p HD resolution IPS LCD screen with Gorilla Glass 3 to add a layer of durability. The similarly sized (and priced) OnePlus One will get you a Full HD screen, so you can get sharper screen resolution elsewhere. Compared to the majority of mid-range smartphones, this is pretty much the norm for resolution and it’s still a great 720p phone screen.

The 259ppi pixel density means a drop down in clarity from the 640, but you’d be hard pressed to spot any individual pixels or fuzziness on the bigger screen. It’s still sharp, colours are accurate and generally a nice place for browsing and watching video. It’s bright as well, viewing angles are strong and you shouldn’t have a problem seeing it at night.

Microsoft uses the same ‘ClearBlack’ screen technology Nokia introduced to its Lumia range a few years ago. The biggest benefits here are the black levels and contrast ratio performance you normally associate with AMOLED screens. While we wouldn’t say they match the Note 4’s AMOLED performance, it’s still a very impressive performer for the price.