What is the Microsoft Lumia 640?

The Microsoft Lumia 640 is a compact, feature-rich affordable 5-inch mobile that showcases the best of Microsoft’s mobile apps and productivity tools.

As far as affordable phones go, the Lumia 640 offers a great deal of value for the money. Let’s put specs aside for a moment. The Lumia 640 comes with a free one year’s subscription to Microsoft Office 365 Personal, otherwise worth £59.99. Now we’re talking about a 4G 5-inch phone with an HD screen, running on a 1.2GHz quad-core processor with an 8-megapixel camera – for effectively £110. Now that’s impressive.

The Lumia 640 runs on the latest version of Windows Phone – 8.1 Denim – and we’ve been assured that it’ll get the Windows 10 update towards the latter stages of 2015.

If previous offerings have failed to attract people to the Lumia brand, the 640 may be the temptation that’s been missing.

At a glance, the Microsoft Lumia 640 is almost indistinguishable from the Nokia Lumia 630/635, but the 640’s translucent plastic back gives it a fresher feel.

In keeping with the trend for bigger phones the Lumia 640 has a larger 5-inch screen, up from 4.5 inches. The additional screen size has made the 640 a little taller and wider, but it’s actually slimmer, at 8.8mm thick. On the whole this phone’s design stays in typical Lumia territory. The phone, covered in smooth plastic and Gorilla Glass 3 on its screen, feels good to hold and is comfortable enough to use one-handed.

The back cover of the Lumia 640 can be easily removed to reveal the phone’s replaceable 2500mAh battery along with a micro-SIM and microSD slots. The extra storage is vital, given that the phone has only 8GB of built-in memory, with almost 2GB of that taken up by pre-installed apps. Fortunately the expansion slot supports cards up to 128GB, which will be more than enough for most people.

We like how tough and well made the 640 feels. Its sturdy construction makes it a phone that we could use confidently without worrying about the odd bump. 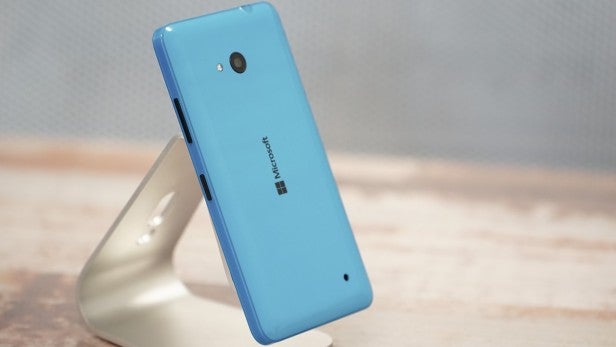 We’re starting to see HD screens become more common in the mid-range price bracket, which is a fantastic thing. The Lumia 640 enters the fray with a 5-inch 720 x 1280-resolution (294ppi) IPS LCD screen with quality that would be impressive on a phone costing twice the price.

The screen does a decent job of representing colours accurately, avoiding the colour casting that we’ve seen on other phones such as the very cheap Lumia 435. Comparing it to a higher-end phone such as the Samsung Galaxy Alpha, which costs over £200 more, it holds up quite well. Used outdoors on a bright day the Lumia 640’s screen is visible, albeit a little on the dark side. Putting the brightness up to “high” doesn’t do a great deal to solve the issue either. If you’re watching any dark videos you’ll really struggle to see what’s going on.

The viewing angles of the 640’s screen aren’t bad, but colours become duller when not viewed straight on.