Little Town Hero is a solid RPG with several unique, ambitious new systems that light up different parts of the brain than you may be used to. However, it also feels like it’s still in the prototype phase. The battle system is fun to figure out, but ultimately combat is so drawn out and confusing that it becomes exhausting. Unfortunately, it’s not as snappy and enjoyable in quick bursts as Pokemon, which may be the thing that doom’s Little Town Hero’s clear potential as a brain-teasing game to play on your commute.

Little Town Hero is a bold new RPG from Game Freak, the beloved studio behind the extremely popular Pokemon series.

The basic narrative premise is that you are a hero in a hamlet where the villagers cannot leave, under oath from the castle. The only way to get out of the village is to go through the castle itself, which is guarded. Beyond the castle is the outside world, which our hero dreams about visiting as a young man. That is until a suite of monsters invade the town and cause havoc, forcing you to step up to the plate and defend your friends and family.

It’s split up into chapters and separates gameplay between meandering around town talking to people, solving puzzles and a brave new take on RPG combat.

The battle system is where things get truly unique. Attacks appear as possibilities called ‘Izzits’ that you have to internalize and become confident about before you deliver them, turning them into ‘Dazzits’, which use your attack power. You can get red, yellow and blue Dazzits, which correspond to attacking, shielding or using magic. Dazzits are like cards from your preferred collectable card game (CCG), and have attack and defence points, breaking when they hit zero.

You deal damage by breaking all of your opponent’s Dazzits and delivering blows with the attack ideas you have left, which do direct damage to their hearts. Guts protect the hearts from immediate damage but are depleted if a monster’s Dazzit eclipses yours in power. If you’ve played a digital card game before, like Hearthstone or the upcoming Legends of Runeterra, you should feel right at home with the initial play process. 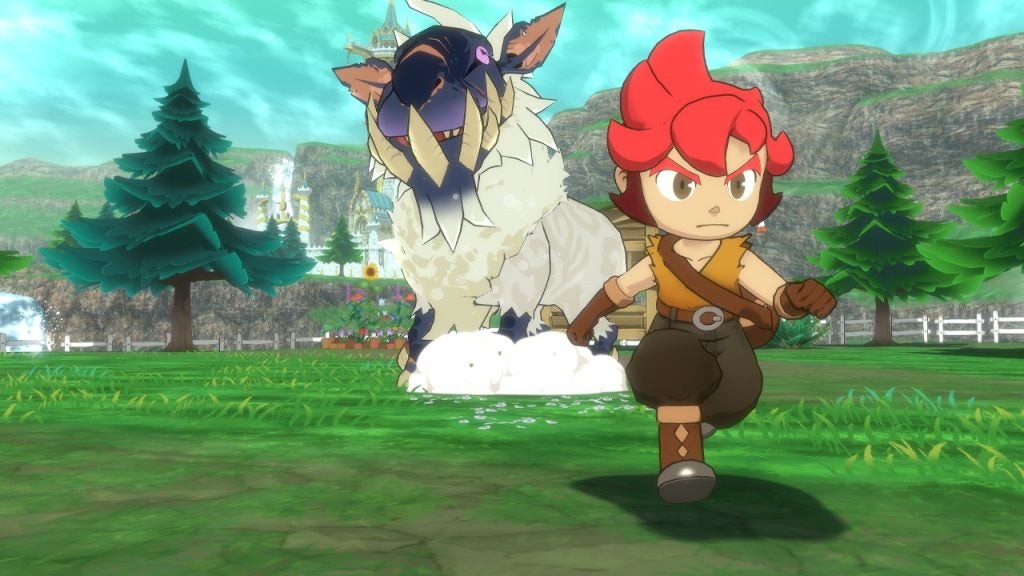 Little Town Hero is all about manoeuvring through these combat puzzles, but the introduction of a few more layers adds the real complexity that may puzzle the typical Game Freak fan. The game introduces the Headspace tab where you can swap out better ideas in battle in exchange for your precious power, but there’s also the Environment tab to deal with, which zooms out to a birds-eye-view of the battleground, depending on which part of the little town you’re in.

This unusual system dictates that you must move around the map constantly, the distance designated by a dice roll at the end of each turn, Mario Party style. On top of that, you also have support characters and Gimmicks, battle boons that sit in particular spots on the map.

Make tactical decisions to arrive at a spot they’re occupying and you can receive a bonus they’ve been brewing up. This is all without touching the Pow Meter, Battle Points and the fact that ideas will fade away over the course of a battle as you daydream, making urgency crucial. It’s an incredibly ambitious RPG combat system, but as you can imagine, it all becomes extremely confusing very quickly. The combat system is also extrapolated out and used in other puzzles, like in the early game where you shear a sheep by breaking its Dazzits so it’s vulnerable.

You can see the Pokemon DNA seeping through the entire game, from a mother’s warning at the start of the adventure to your colour-palette swap of a rival in Matock, a goodie-two-shoes who wears ripped jeans. As the eponymous Little Town Hero, you have to prove yourself in the eyes of Professor Oak stand-in Angard, who holds the keys to the outside world and the lands beyond. Yet, in this case, he’s a total hack and you blackmail him into training you by threatening to alert his superiors about his drinking problem. 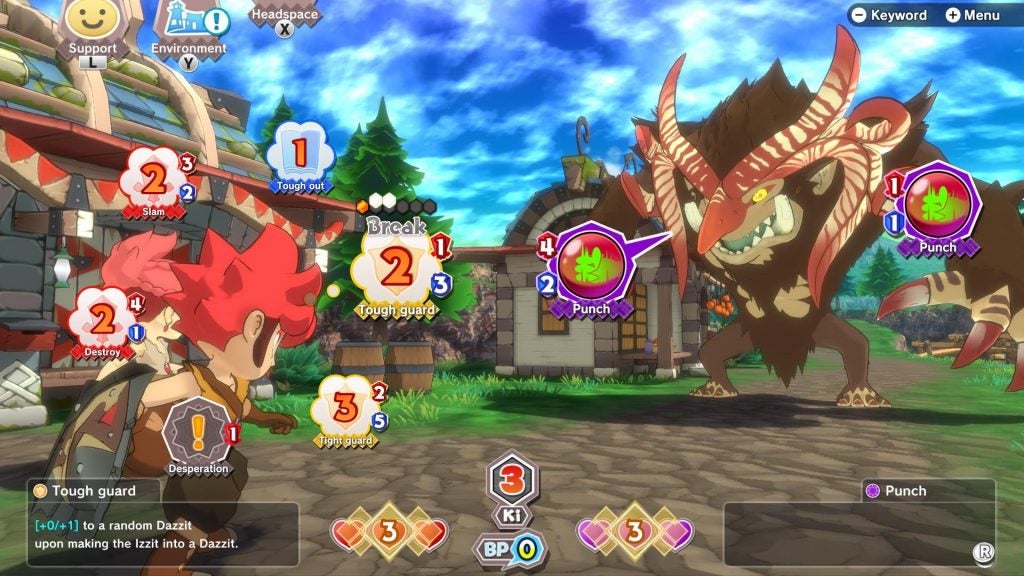 Your lush hamlet is filled with charming residents and businesses, from a cheese shop in which an old woman shares the secret to her smooth skin to a coal mine full of NPCs with the same face model. Your dad was also a coal miner called Cole (yes, I groaned too) but he left when you were small and is out there in the world beyond the castle, achieving the life you could only dream of.

Little Town Hero is lovely to look at in handheld mode thanks to a very distinct and appealing art style, so it’s such a shame that the UI is spotty. There’s the wonderfully detailed quest log that collects your adventures in scrapbook style, but the battle screen looks like it’s still in the prototype phase of design. For a game with such flair and ambition, it’s a shame they couldn’t make the space around the action sing some more. Wandering around the township is a true audio-visual delight by comparison, and the quiet melancholy hamlet is brought to life by a dynamic soundtrack, which changes in tact between zones in a seamless fashion.

I’d often stop to take it in as I indulged in the cute side quests proposed by the villagers, which litter each chapter and provide a respite from the main story. Yet eventually I started to become frustrated with the camera, which often gets stuck at a tricky overhead angle, meaning I couldn’t gawk at the environments around the protagonist.

You’re destined to look at your feet at times, and it feels restrictive given how much passion has gone into crafting the visuals of the town. In docked mode, the frame rate can tank if you’re pushing the camera too hard. The game also has a tendency to halt as it loads NPC dialogue or a new battle, which really pulls you out of the experience. It’s not so bad that it’s unplayable, but you’d be best sticking to handheld mode to enjoy the soft-edged visuals without the performance hiccups. 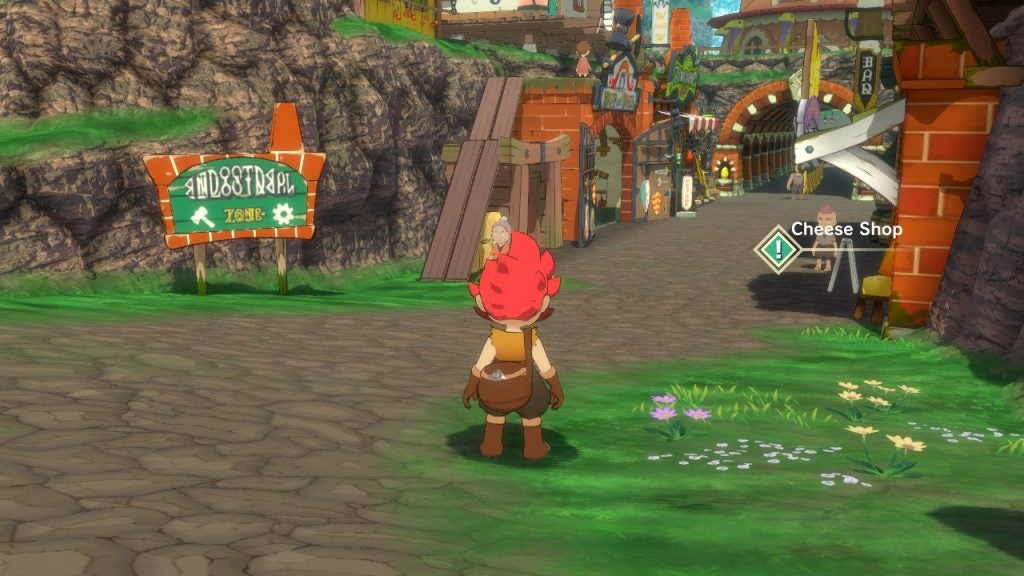 As well as the brand new battle system, Little Town Hero tries to change how we solve puzzles in RPGs. Throughout the game, you learn keywords by talking to the townsfolk, which then inform a supposed solution. Little Town Hero is all about the process of internalising and using ideas, both within battle and outside of it, which in practice makes the game feel very high-concept at times, but it often belies some frustrating simplicity. For example, an early quest asks you to figure out how to lure a hungry soldier from his post. So you find a number of keywords around town, including Cat Food, Smell, Lure and Curryquette.

To solve the quest, you have to relay the idea in a particular sequence, with some keywords designed to throw you off. If you were arranging the words in a sentence it would make sense, but you’re left to figure it out and, inevitably, trial and error the sentence structure that the quest giver wants to progress. The NPC often treats you like a fool for switching words around, even thought they would still make grammatical sense, or are too similar to one another to really matter. It feels like it’s been overthought by the design team, and could have been achieved with an approach that respects the player a little more, especially given that the battle system is already very confusing. 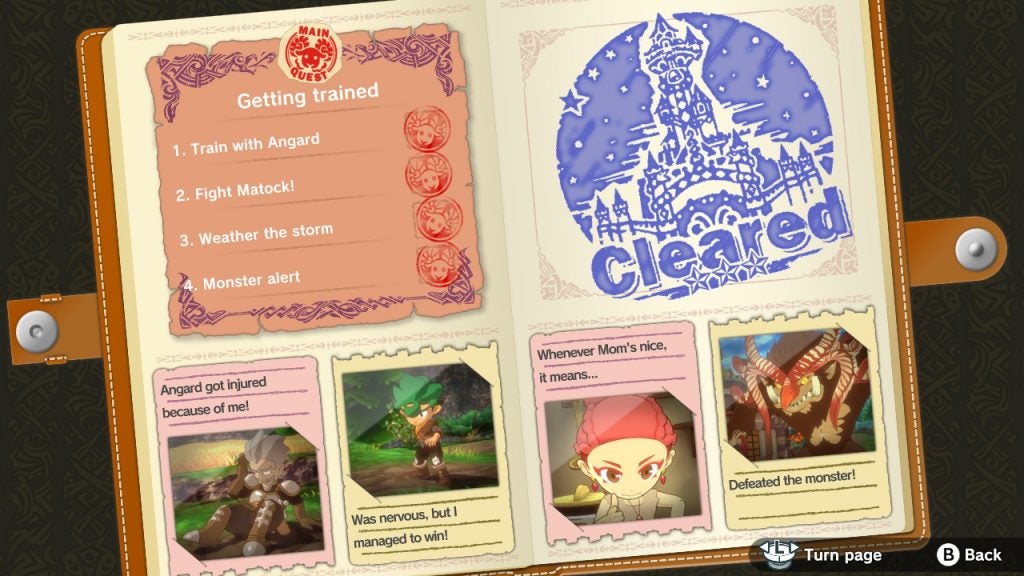 To talk more of the game’s impeccable soundtrack, the man in charge is Toby Fox, the multi-talented musical genius behind Undertale and Deltarune. From soaring town-exploring tunes to the high-octane battle themes, his special maker’s mark is felt throughout every facet of the game, and it’s almost worth the price of admission alone to hear his heart-puncturing score. Fox captures the anxiety and melancholy of small-town living with ease, and the music only becomes more meaningful and intense as our protagonist’s lives are flipped upside down by machinations beyond their control, and they stray from naivety.

Little Town Hero is a solid RPG with several unique, ambitious new systems that light up different parts of the brain than you may be used to. However, it also feels like it’s still in the prototype phase, and is let down by some awkward visual design choices, performance bugs and a puzzle system that lacks any of the intuition that the developers had clearly intended.

The battle system is fun to figure out, but ultimately combat is so drawn out and confusing that it becomes exhausting, and as the turns start to cloy, you may have to put the game down for a while and play something else. Unfortunately, it’s not as snappy and enjoyable in quick bursts as Pokemon, which may be the thing that doom’s Little Town Hero’s clear potential as a brain-teasing game to play on your commute.