At close range, the Linksys Velop MX5300 Whole Home Mesh WiFi 6 System is fast. However, avoid the one-pack version as you don't get additional satellites to improve range. Instead, buy the two-pack for better range and performance. A high purchase price and subscription-only plans for the full parental controls makes this fairly hard system to recommend at the moment, though.

Named the Linksys Velop MX5300 Whole Home Mesh WiFi 6 System, I’d expect this package to come with one router and at least a single satellite for placement around the home.

Instead, this is what Linksys calls a “1-pack”. So, this “mesh” system comes with just a router, with the option to buy add-on satellites – or a two-pack coming in the future. For now, then, this is less a mesh system than a single Wi-Fi 6 router with 12 wireless streams for clients.

Since I first reviewed this system, the MX10600 twin pack is now available, throwing in a second satellite for a total price of £799. As a result, I’ve added extra test results in to show how the additional satellite improves things.

Linksys Velop MX5300 design – A bit chunky, but the router fades into the background

The Linksys Velop MX5300 is a rather tall bit of kit. It doesn’t take up as much desk space as a traditional router, measuring 243 x 114 x 114mm. I quite like the plain plastic exterior; once you have the router set up, it kind of fades into the background.

Around the back of the router are the ports you need to get the router connected to the internet. There’s a Gigabit WAN port, although it’s a bit of a shame that this isn’t future-proofed with a 2.5Gbps port.

Joining this are four Gigabit Ethernet ports for wired devices, which is fairly standard fare for any router. Finally, there’s a USB port, which you can plug storage into if you want to use the system as a quick and easy NAS. 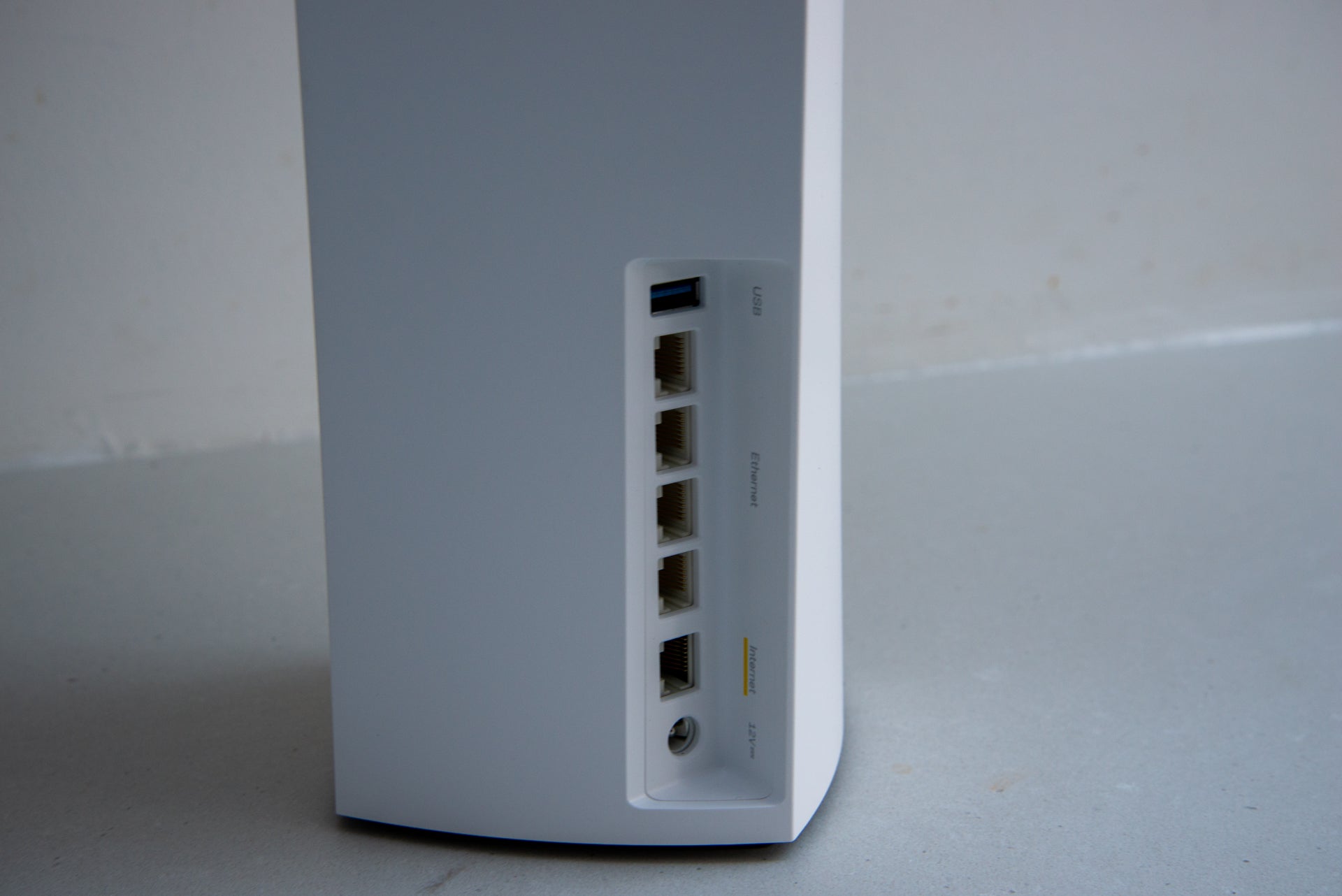 If you buy the twin pack, you get another MX5300 to use as a satellite. That’s fine in terms of looks, but it’s a shame that the satellite doesn’t have four Gigabit Ethernet ports, rather than giving you three plus a WAN port that you can’t use.

As is common today, the Linksys Velop MX5300 is set up and configured through the Linksys app. It’s best to set up a Linksys account at this point; doing so gives you remote control of your router, so you can fix any problems or reboot the system over the internet.

Linksys uses Bluetooth to connect to the router, then a wizard will walk you through the setup of your broadband and internet connection. It took me less than five minutes to have the router up and running.

Once done, the app provides complete control over the router. There’s a web-based management page too, although this just replicates the features in the app, so you shouldn’t have to turn to it. 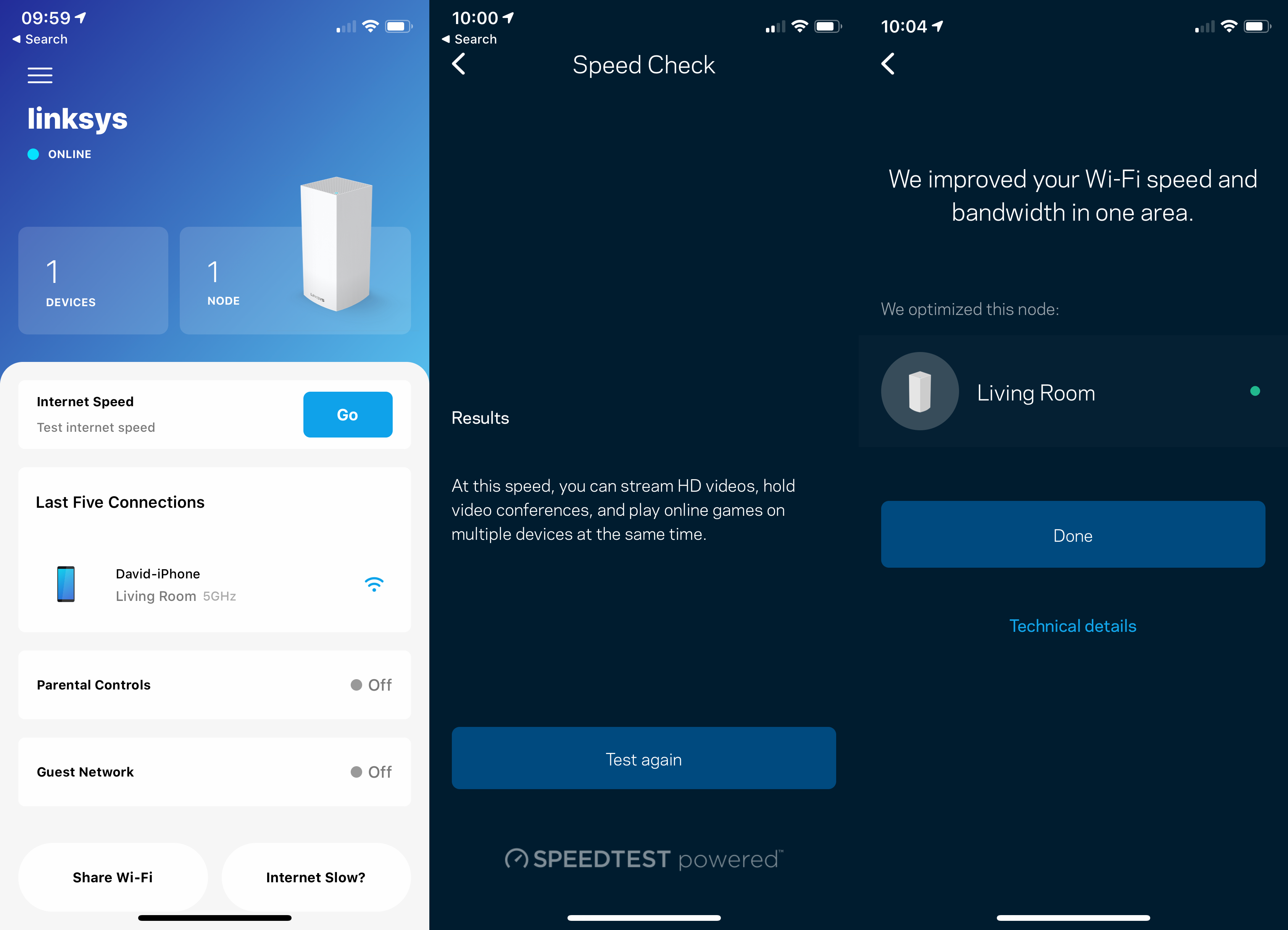 The app is simple to use

Basic parental controls are built in, whereby you can set up a schedule for each device on your network or pause access to a specific one. For each device, you also have the option to manually block a website – but you have to type in the web address you wish to block. More powerful routers have predefined blacklists that you can enable, either by selecting a user’s age or categories of sites that you want to disallow.

I’d also prefer to be able to group devices into profiles, providing control per person. For example, if you have kids, you want to enforce internet access devices on all of their devices at once, rather than having to manually control each one.

For these features you’ll have to subscribe to Linksys Shield, which gives you profiles and more detailed web blocking. It’s a shame you don’t get at least basic controls for free, as you do with the Netgear Orbi system, which also offers a more fully featured paid-for subscription.

Once you’ve run a speed test on your internet connection, you can also set up to three devices to get internet priority. These automatically receive full internet and Wi-Fi speeds. However, everything else on your network gets throttled, as I discovered on running my first set of speed tests. My advice is to only use this feature if you’re having problems with one device, such as a smart TV that can’t stream Netflix because other users in the house are downloading large files. 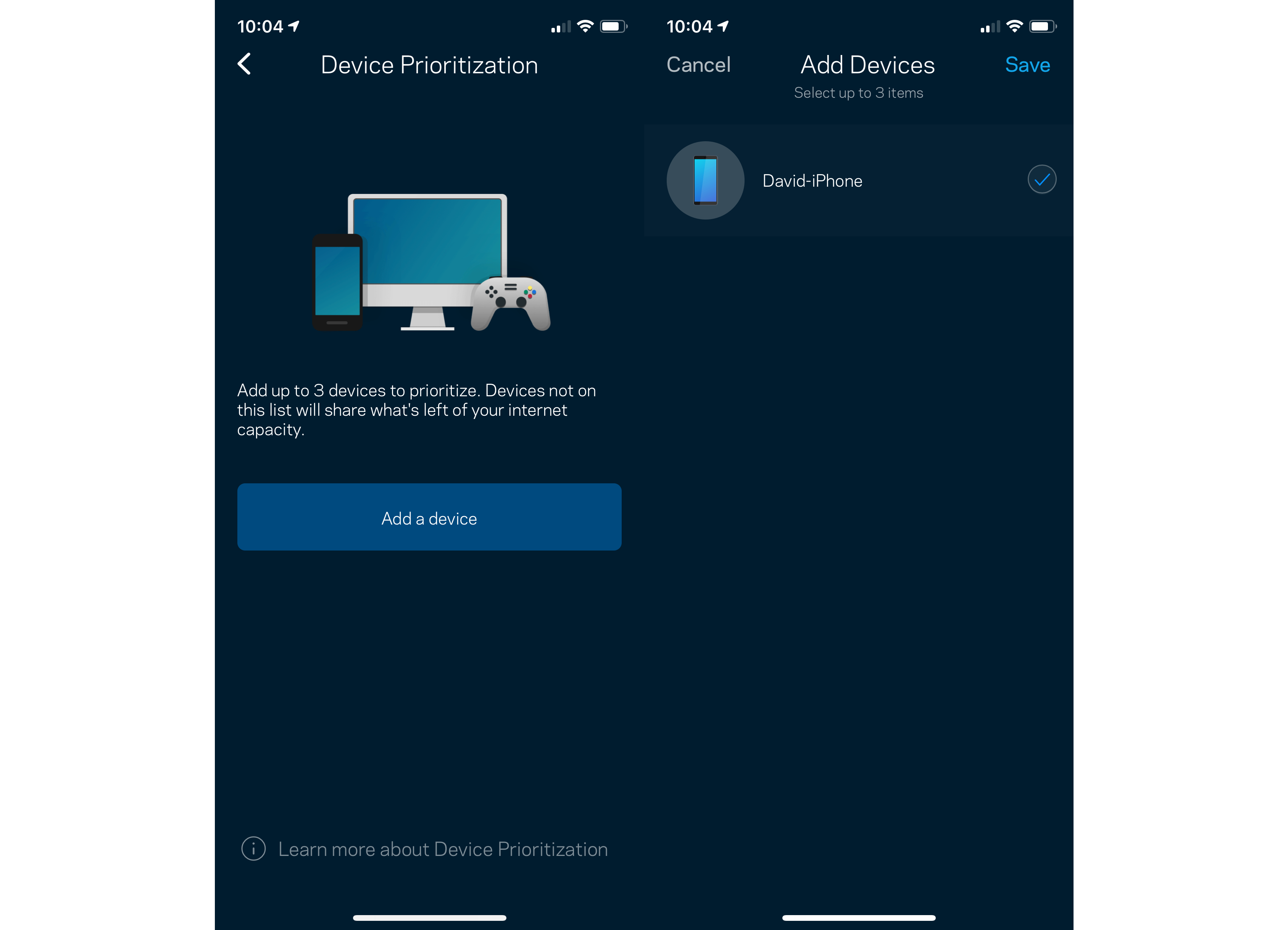 You can prioritise up to three devices

Other features are surprisingly light. For example, you can’t choose a wireless channel for any of the networks and you can only use the Channel Finder option to get the MX5300 to look for the best channels to use.

Linksys Velop MX5300 performance – Quick, but not as fast as the competition

The Linksys Velop MX5300 is a tri-band router, giving you one 2.4GHz network (1147Mbps) and two 5GHz networks (2402Mbps and 1733Mbps). The router presents all three networks under the same name, pushing connecting devices to the best one based on features, range and performance. This is common and makes managing devices easier, as they should only connect to the best network for them.

Each network has four streams, giving a total of 12. Streams are very important in the WI-Fi 6 world, as with Wi-Fi 6 devices it means that each one can either get its own dedicated bandwidth (a stream) or get better performance by using multiple streams at once. Wi-Fi 5 devices don’t have the same sharing benefits, although they should still get faster throughputs.

To test the router’s performance, I used a laptop that had been upgraded with a 2×2 (two-stream) Wi-Fi 6 adapter. Starting in the same room as the router, I got upload speeds of 447.64Mbps and download speeds of 468.01Mbps. 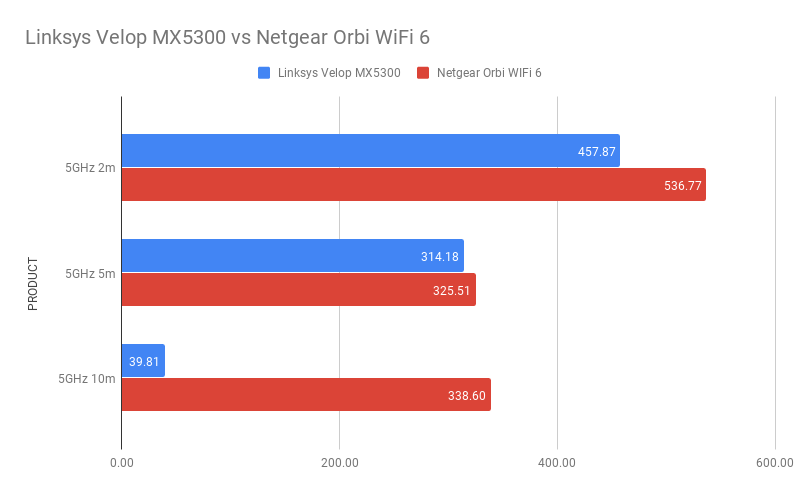 Testing with a second satellite, and performance completely changed. Close-up, I got the same results, with a little boost on the first floor. On the second floor, things really picked up, with an average throughput of 338.60Mbps. This shows how important additional satellites are in mesh systems; if you’re not going to buy satellites, you may as well buy a standalone, more powerful router. 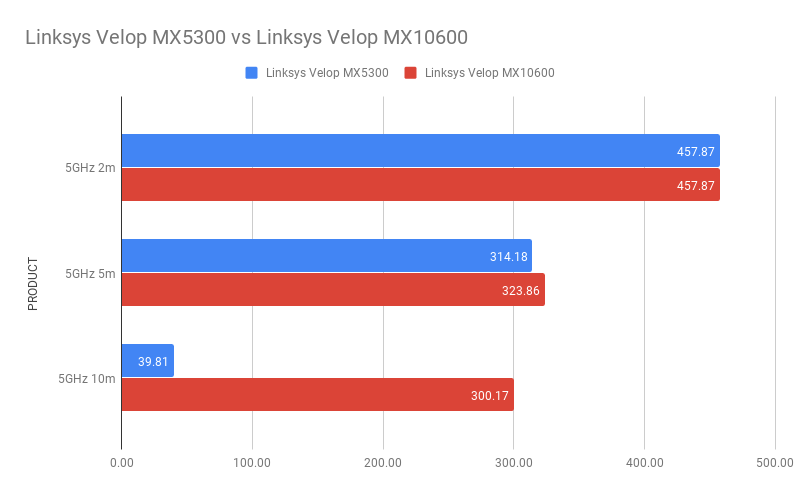 Comparing the MX5300 with the Netgear Orbi WiFi 6, the Orbi is much faster at close range and just pulls ahead on the first and second floors, too, as a result of its second satellite. The MX5300 is faster than the older Wi-Fi 5 Orbi RBK50, although not at range – again, due to the additional satellite.

The Linksys Velop MX5300 Whole Home Mesh WiFi 6 System is a somewhat strange product, in that it currently isn’t a mesh system, with only a single router. I would avoid this product. The MX10600 is a far better product, able to push a signal to the top of my house, although it’s comparatively expensive, so remains harder to recommend until there’s a price drop. At the moment, the Netgear Orbi RBK850 is faster and cheaper, but the best overall Wi-Fi 6 system is the Asus ZenWiFi AX. If you’re just after reliable, fast Wi-Fi and don’t need Wi-Fi 6, the older Orbi RBK50 remains the best-value mesh system.