While they're not the best sounding true wireless earbuds on the market, there's plenty to like about Libratone's Track Air+. From their warm, but mellow sound to the implementation of active noise cancellation, a slick app and stylish design, they're an immensely appealing pair of in-ears

What is the Libratone Track Air+?

The Libratone Track Air+ are the Danish brand’s premium true wireless in-ears. Despite their small form factor, they present a big sound, plus the inclusion of active noise cancellation marks them out as a rival to Sony, albeit at a less expensive price.

When it comes to headphones, wire-free appears to be the way to go right now. Every brand you’ve heard of – and plenty you haven’t – have launched a pair, with each month bringing more to what’s become a sizeable table.

Danish brand Libratone has a good reputation in the audio market. From its Zipp wireless speakers to its more conventional headphones, it’s a brand that’s always been in the mix.

The Track Air+ in-ears are its latest effort, not to be confused with its Track Air or Track+ headphones, bringing active noise cancellation at a premium price.

The question is, with some many other options out there, can the Track Air+ make an impact?

Design-wise, true wireless in-ears broadly come in two forms: Frankenstein’s Monster-type bolts, or a more shapely affair such as the Apple AirPods. There are advantages and disadvantages to both styles – but with the Track Air+, Libratone has found a likeable approach.

They look very like the lapel from Star Trek, sporting an angular “Y” shaped design that’s small and discreet. 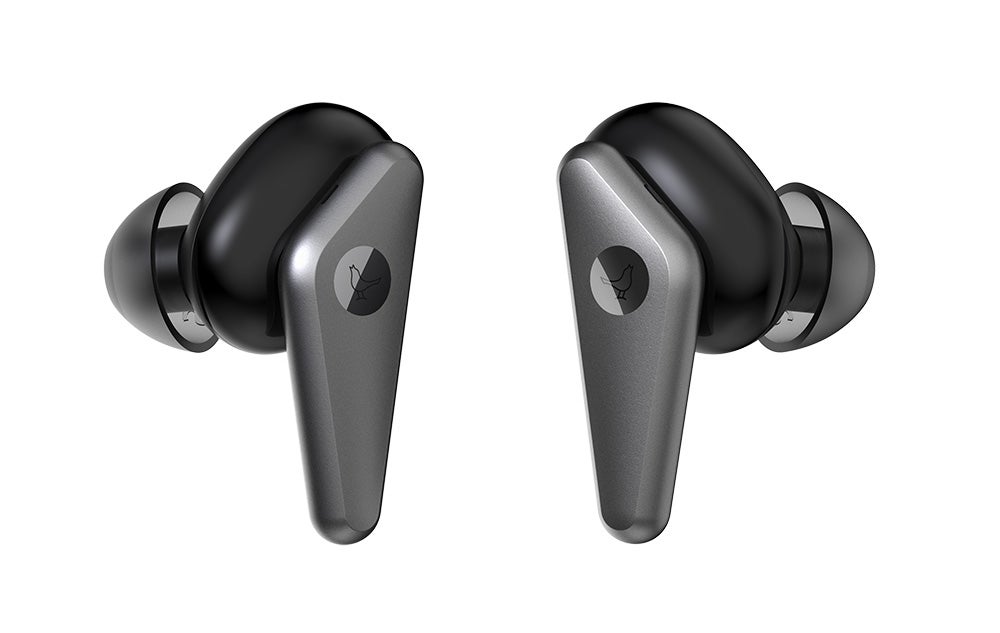 At 5.6g they’re incredibly light, and although you’ll certainly be aware of their presence, they slot nicely and neatly into the ear – rather than you feeling like you’re having to bore a hole to make space. Other true wireless in-ears I’ve experienced often require you to take a break from wearing them after a period of time, but the Track Air+ are one of the most comfortable in-ears I’ve come across, making long listening sessions a cinch.

They do feel slightly plasticky, but not in a manner that suggests poor build quality. They can survive a few drops on the floor, although they may become scratched depending on the type of surface. 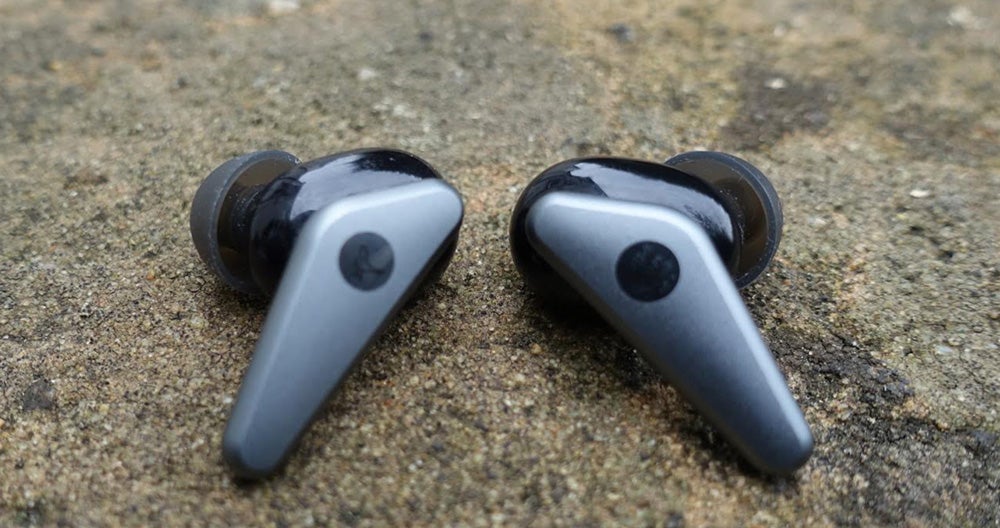 An IPX4 rating ensures the Track Air+ are able to survive sweat and rain, making them an option for use in the gym or on a run, plus their fit ensures they’ll stay secure.

If the default ear-tip doesn’t quite suit, there are small, medium and large options bundled in package. In terms of colour options, Libratone has settled for its usual understated look (black or white), but their form and sleek finish help make for an attractive pair of in-ears.

The Track Air+ boast a bevy of features that makes them user-friendly, but that also bring them into the orbit of Sony’s WF-1000XM3.

For one, they feature noise cancellation, or what Libratone has dubbed “Smart Noise Cancellation”, which is its version of adaptive sound. Choose this option and the in-ears will gauge noise levels and respond in kind, liberating your ears from as much as 30dB of noise.

Having used this in a busy breakfast restaurant, the Smart NC worked well to smother the clanging of dishes and people chatting over food to an acceptable level. It also works with with just one earbud, if you’re the type of person who just wants to wear one. 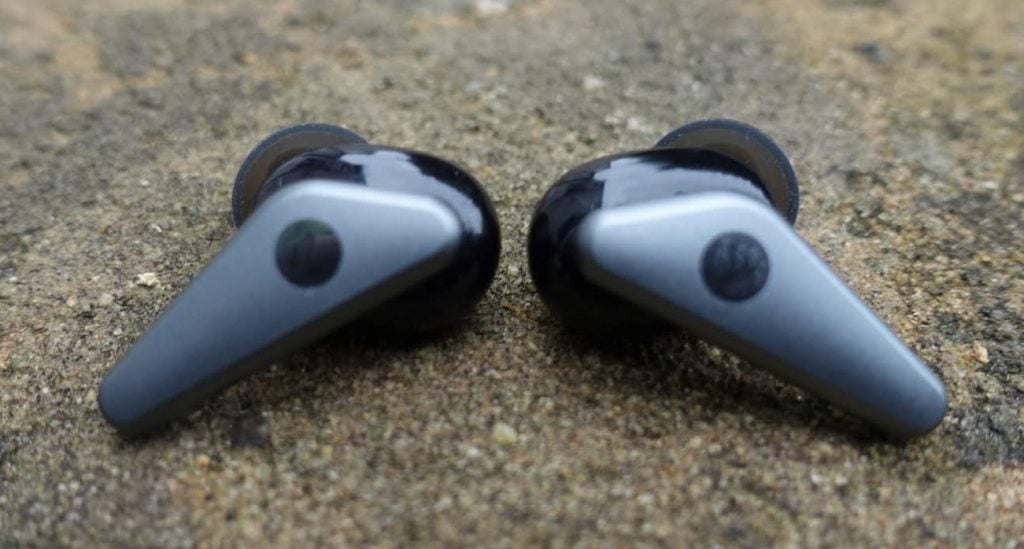 There are times where it can be less than rapid in response; nevertheless, it works well enough. If the Smart NC option isn’t for you, noise cancellation can be manually set or turned off completely.

Wear Detect automatically knows when an earbud has been taken out of the ear and thus pauses the audio, resuming as soon as you put them back in.

Gesture controls can be found on both the left and right earbuds. A double-tap on the logo offers interaction with playback, noise-cancellation, skipping tracks and voice assistants, and it works more often than not. Note that there’s only room for one function on each earbud, so you’ll have to swap one out for the another. Volume is controlled from your device. 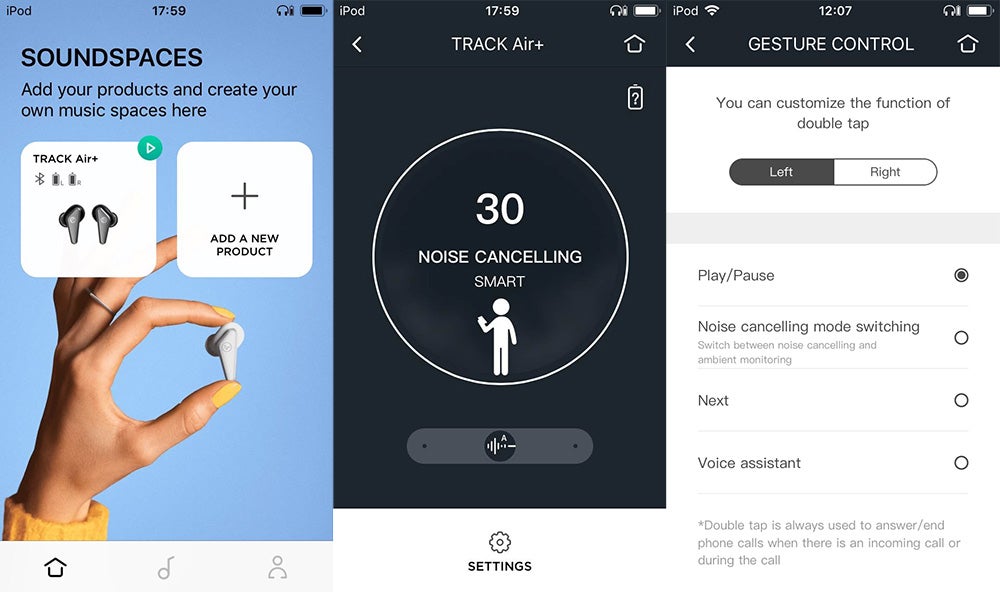 The Libratone app is slick, easy to use and responsive, allowing access to the features in a few taps. You can add several Libratone products and manage them in the app, and choose from three sound profiles (Neutral, Extra Bass and Enhanced Treble). There’s built-in access to streaming services such as Tidal and Spotify, or you can access your own local music collection.

You can even discover how much battery is left in each earbud. If you place both earbuds in the charging case and take one out, it’s possible to determine how much charge is left in the case itself (top-up via the USB-C cable). For wireless charging, there’s the Libratone COIL charging plate that costs around £35. 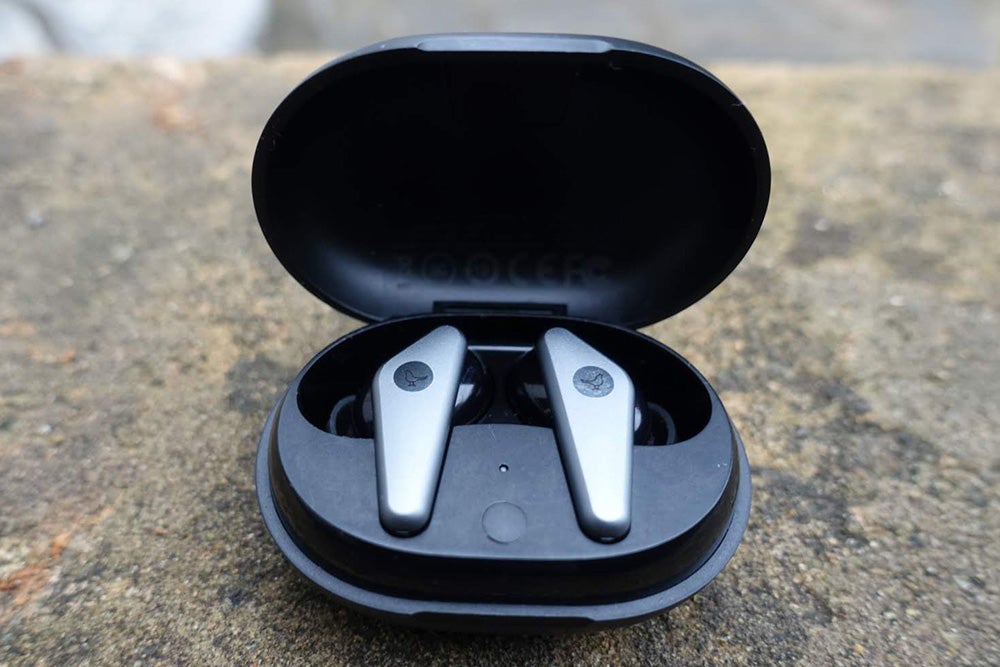 The case itself is minute. Pebble-shaped in form, it will easily fit in a pocket. Pairing is simple: take the Track Air+ out and press the tiny button at the centre of the case for 2 seconds; they’ll pop up as either Track Air+ Left or Track Air+ Right. When turned on they’ll connect to the last device used.

Battery life is six hours, at least it is when not using the noise cancellation. The case contributes a further three charges for 24 hours overall.

Bluetooth is 5.0, although to get the best out of that you’ll need to connect to other Bluetooth 5 devices that support the same features. Both earbuds also (somehow) manage to fit dual-mics into their size for clearer call quality.

Libratone Track Air+ performance – Delivers a big sound, but it isn’t the most articulate of performers

So far the Track Air+ are two-out-of-two for design and features, but its the sound where they’ll sink or swim. So it’s good to note that the Libratones put in an entertaining performance.

The benchmark at this price are the Sony WF-1000XM3s, and in this regard the Libratones do fall short. But they have their plus points – one of which is that they sound big. Considering their size, they’re capable of unleashing plenty of power to propel a track. 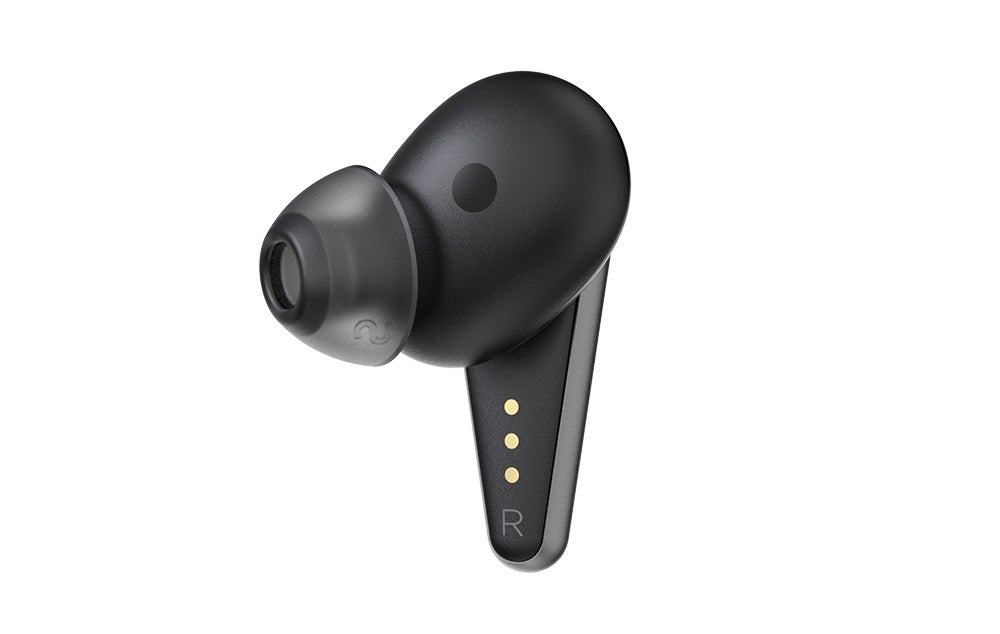 We started with test favourite E.L.O’s Mr Blue Sky. Its presentation was big and loud with a good, steady sense of tempo that kept up well with the song’s toe-tapping rhythms. Stereo imaging was decent, too, with a good sense of depth.

The very good Utah Escape track from the very average Need for Speed film offers a decent sense of scale and dynamics, and Hans Zimmer’s Supermarine from The Dunkirk OST is well served by the Track Air+’s reserves of power.

However, if we’re considering the WF-1000XM3 as the best you can get – and we are – then the Libratone Track Air+ don’t offer the same sense of clarity or detail. 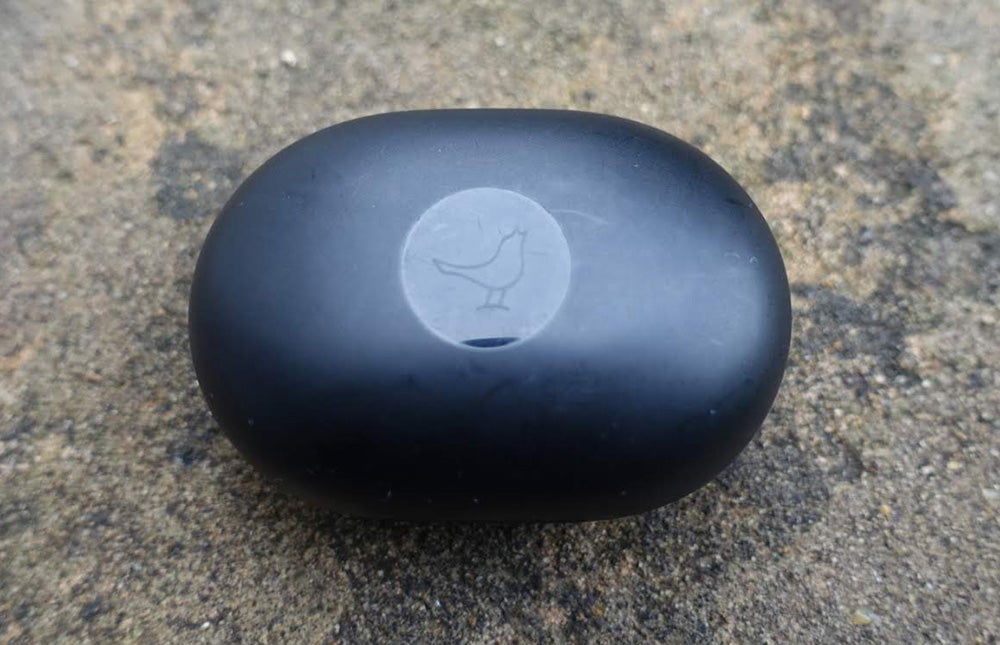 Dynamically they’re not as fleet-footed, either, and where the Sonys brought out the character of each song, the Track Air+ applies its warm, mellow profile to any track you feed it. That works well enough, but if you’re after nuance – and if you’re shelling out £175, you likely ought to be – the Sony WF-1000XM3 are the better-sounding pair.

In terms of wireless connectivity, the Track Air+ put in a decent shift. However, they were patchy at times on the tube, at busy train stations (which we expect), but also on a train carriage with few things to cause interference. Most of the time they were fairly slick, but every now and then, they were slightly staccato.

Should I Buy the Libratone Track Air+?

The Track Air+ have many things in their favour, including active noise cancellation, comfort and a snug fit plus good, if not class-leading, sound. But with a deluge of true wireless options out there, the market has quickly become saturated.

Apple’s AirPods (2019) aren’t as good at noise isolation and are certainly weaker in terms of audio quality – especially in terms of bass. While Apple users will be wedded to their AirPods, the Track Air+ are an alternative that pack plenty more features and slot in between the cheaper and more expensive AirPod options.

Cambridge Audio’s Melomania 1 don’t have all the features of the Track Air+ and aren’t as fetching, either. Nevertheless, they’re comfortable to wear, offer an energetic sound, have better battery life and are cheaper, too, at £120.

Then there’s Sony’s WF-1000XM3, which are the Libratone’s closest rivals in terms of features and price. Sony’s noise cancellation is outstanding and the audio quality is the best we’ve heard. If you’re willing to part £175 on the Libratones, we’d suggest you go a bit further and spend on the Sonys.

Despite that, the Libratone Track Air+ are a confident, slick and enjoyable pair of true wireless earbuds. You won’t be disappointed by what they offer.