While not quite as good as LG's more expensive OLED TVs for 2018, the OLED55B8PLA still retains more than enough OLED picture quality DNA to look like a serious bargain.

What is the LG OLED55B8PLA?

The OLED55B8PLA is the cheapest OLED TV LG has ever made. This may well be all many AV fans need to hear before rushing off to the shops to buy one.

Before you do, though, you should note that unlike other entry-level LG OLED models of recent years, the OLED55B8PLA doesn’t deliver the same picture as its more expensive siblings. To keep its price down, it uses a less powerful video processor that does impact the picture quality.

Provided you keep that in mind, the OLED55B8PLA is still good enough to make its £1,500 price look like a bargain. 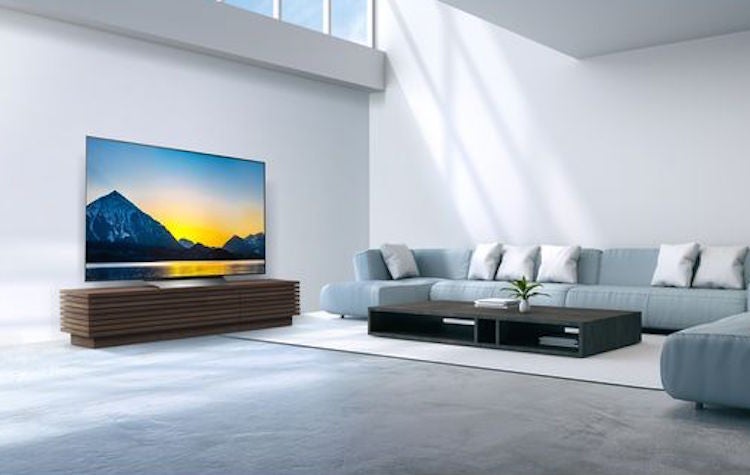 The LG OLED55B8PLA is ridiculously attractive for a £1500 TV. As ever with OLED TVs, it’s phenomenally thin – at least at its outer edges.

I love the way its frame sits flush with the screen, creating a beautifully monolithic effect. The screen’s metallic mounting is also gorgeous, and makes the set far more robust than such a slim TV has any right to be.

The OLED55B8 is available with two different stand variations. The ‘PLA’ version I tested places the screen on an angled-down metal ‘sheet’. An OLED55B8SLC version uses a more open and airy ‘boomerang’ style support. Both look attractive, although I somewhat preferred the more serious look of the PLA approach.

The LG OLED55B8 comes with one of LG’s ‘Magic’ remote controls. These have a wheel to help you spin quickly up and down the on-screen menus. However, if you’re feeling traditional, the more standard navigation buttons are also provided. 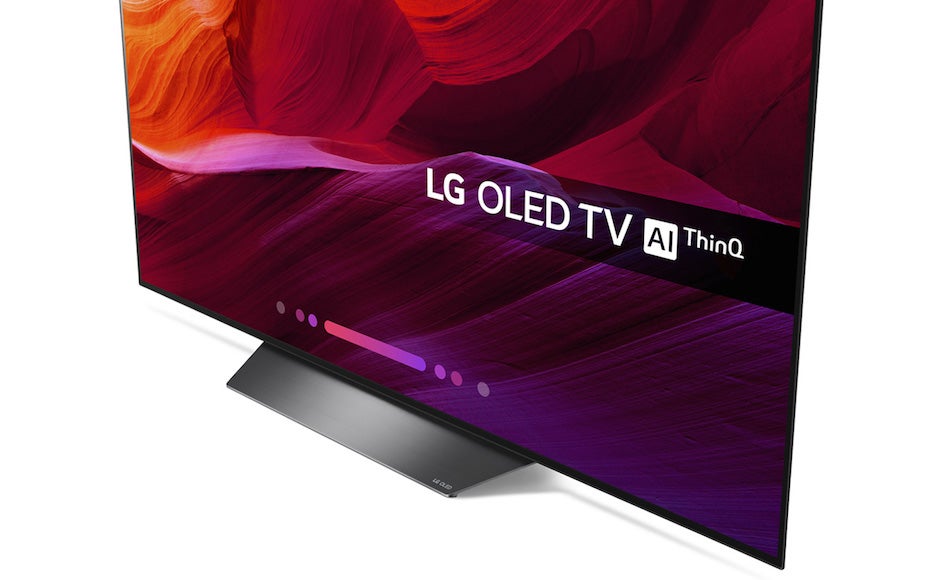 The LG OLED55B8PLA is a 4K OLED TV you can buy for just £1500. This makes it potentially dreamy for AV fans attracted by OLED’s picture quality but normally deterred by its price.

Why are OLED screens so popular with AV fans? Because each OLED pixel makes its own light – unlike LCD TVs, which have to use external light systems. This means that OLED TVs can deliver deeper black levels and more local contrast than LCD TVs.

OLED TVs are perfect for managing the inky black levels and extreme contrast found in many films. Especially if those films are being presented using high dynamic range (HDR) technology.

But, as noted earlier, the B8 doesn’t feature the same picture specification as the other models in LG’s OLED range. Its Alpha 7 processor falls short of the Alpha 9 processor used in LG’s C8 series and above. I will explain how the processors differ in the Performance section.

The OLED55B8’s smart features are powered by LG’s webOS system, which is still slick, attractive and easy to follow. However, the scrolling bar of selectable ‘folders’ along the bottom of the screen is becoming a little unwieldy as the number of TV content sources grows ever bigger.

Apps supported by webOS include all the key video streaming platforms: Netflix, Amazon Prime, Rakuten, YouTube, Now TV and the catch-up apps for the UK’s main terrestrial broadcasters. What’s more, the TV catch-up apps are available within a Freeview Play umbrella app. This makes it much easier to find and browse shows across all the catch-up platforms. 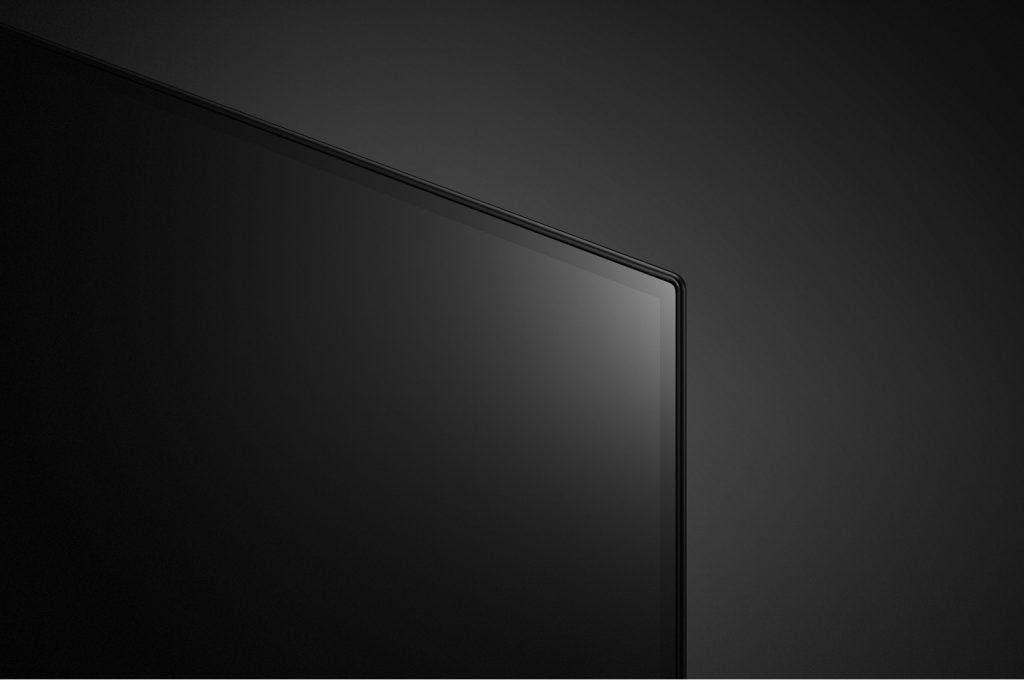 The Game preset reduces the amount of time the OLED55B8 takes to render pictures to under 25ms. This is a good result that makes the TV a potentially very effective video gaming monitor.

The LG OLED55B8’s relationship with Dolby doesn’t end with its Dolby Vision HDR support. It also carries a built-in Dolby Atmos audio decoder. This works both with external, HDMI-connected kit, such as an Apple TV 4K or 4K blu-ray player, as well as internal Dolby Atmos apps, such as Netflix.

Whether the TV’s built-in 2.2-channel sound system can do justice to a Dolby Atmos soundtrack, though, is another matter. You can use the OLED55B8PLA’s audio return channel (ARC) HDMI to pass the Atmos audio through to external sound solutions. 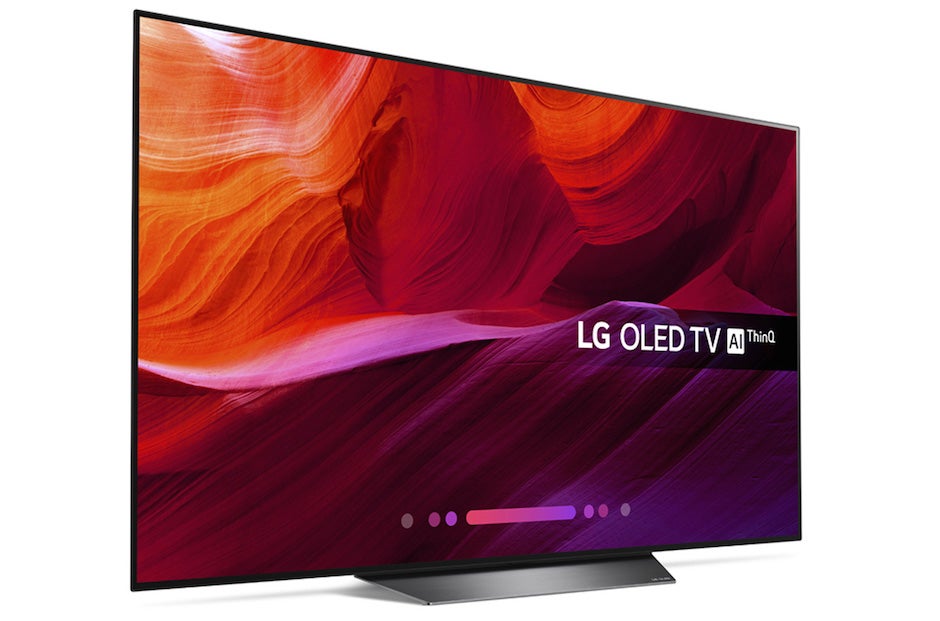 The OLED55B8PLA’s picture presets are a bit tricky. You get the most ‘accurate’ colours and tones if you use the Cinema/Cinema Home settings. These keep noise to a minimum, too.

For me, however, they’re just too dark to do HDR justice. Personally I’d recommend the Standard mode instead. Though I’d suggest nudging down the brightness setting one notch to reduce the potential for noise in dark picture areas.

Turn off all noise reduction for native 4K viewing to stop the picture becoming soft. For motion, I’d recommend the Custom setting, with the blur and judder elements set to three.

Also borderline essential for me is the Dynamic Tone Mapping feature. Yes, activating this may not give you the most accurate, ‘as the director intended’ image. But the extra dynamism and brightness it introduces with HDR content is substantial.

Finally, a word on the sound. If you’re watching a film and can turn the volume high, use the Dolby Atmos setting. If you can’t run the TV loud, though, Atmos is best turned off.

Related: Dolby Vision HDR: Everything you need to know 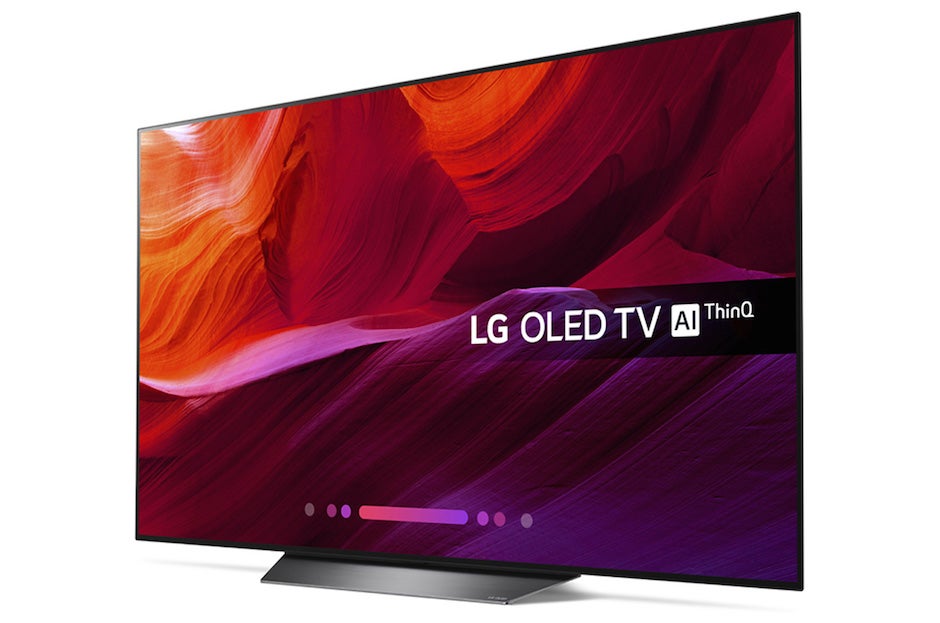 The LG OLED55B8PLA’s pictures are not as good as those of the brand’s C8 series. They are, however, still seriously brilliant for a £1,500 TV.

Let’s cover the good news first. Starting with the fact that as you would hope with any OLED TV, its contrast is immense. Beautifully deep, rich, natural black colours share screen space with clean, pure whites and gorgeously bold colours.

Even better, a picture’s brightest highlight can sit just a pixel away from its deepest black with no compromise between the two. Scenes containing a bold mix of light and dark content thus look spectacularly intense and realistic.

While some LCD TVs can get much brighter than the OLED55B8PLA, no LCD TV can match the OLED’s purity and punch when showing small bright objects against very dark backdrops. It’s lovely, too, to find the OLED55B8PLA free of the light ‘clouding’ around stand-out bright objects that you get on almost all LCD TVs.

In short, the OLED55B8PLA clearly shows off all the key benefits of OLED technology, despite its groundbreakingly low price. But if you can rustle up an extra £500, there are compelling reasons to consider the LG OLED55C8 instead. 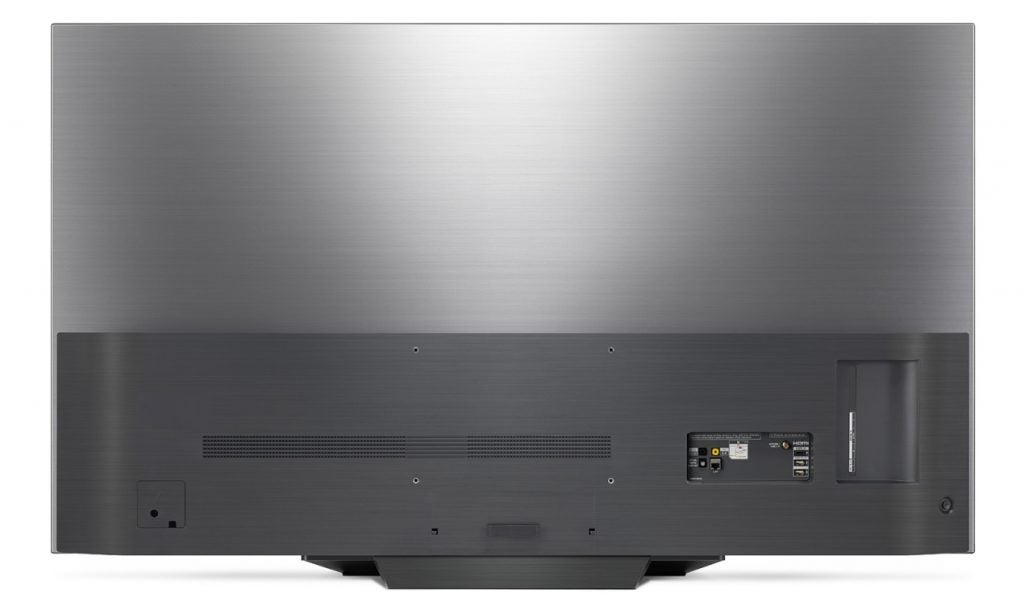 First and foremost, the B8 isn’t as bright. This seems odd, as you wouldn’t necessarily associate brightness with processing. But while the C8 measures around 800 nits on a 10% white HDR window, the B8 tops out at around 680 nits. That’s a not unsubstantial difference, and does make HDR pictures look less explosive and, well, HDR.

It also means there’s a touch less detail and toning information in the brightest parts of HDR pictures, and slightly less intensity in contrast-rich scenes. It can also lead to dark areas of shots sometimes looking slightly short of detail and overdominant.

The B8’s reduced processing power also means that it’s not as good at upscaling HD sources to 4K. The results look a little softer, and subtle colour blends are a little less astutely managed.

As I noted above, motion isn’t handled as well as it is on the C8 series either. There are distracting digital side effects and stutters if you use the Smooth or Clear settings respectively. A Motion Pro option uses black frame insertion to make motion look more filmic, but also makes the picture too dark. 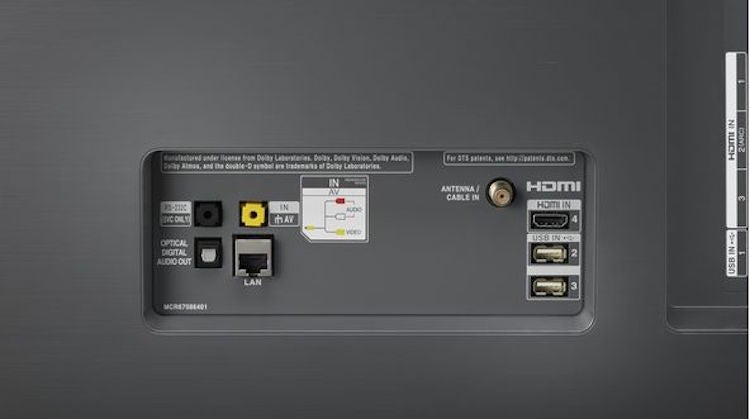 The B8’s colours, meanwhile, aren’t quite as consistently balanced and natural-looking as they are on the C8s. And finally, the B8’s pictures are more prone to noise, especially in dark areas.

Let me reiterate, though, that while the C8 is unquestionably the better performer, the OLED55B8PLA remains a great performer for its money.

Surprisingly, the OLED55B8PLA manages to partner its stellar pictures with some more-than-decent audio. Despite the trimness of much of the TV’s bodywork, its speakers deliver a clean, punchy, detailed sound without succumbing to distortions or dropouts.

High trebles are handled without sharpness, and are balanced out with some punchy (if not especially deep) bass. The mid-range is open and balanced, and plays host to rich, well-rounded dialogue.

Most remarkably of all, Dolby Atmos tracks are dispersed over a startlingly large area without becoming incoherent. There’s even a marginal sense of sound behind you, and some genuine height to the sound stage.

The only catch in all this is that the Atmos decoding is only really effective at loud volumes. At medium or low volumes, turning Atmos off can give a more balanced, convincing result. 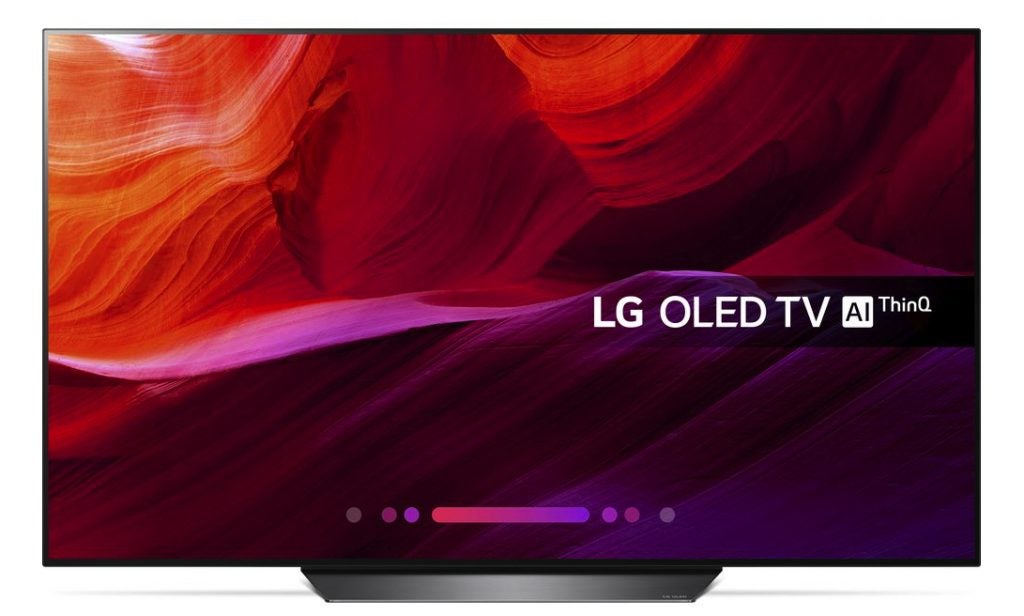 Should I buy the LG OLED55B8PLA?

As comfortably the cheapest OLED TV yet, the OLED55B8PLA is likely a no-brainer for many AV fans. Yes, you can do better with LG’s OLED55C8 for £500 more – but £500 is a lot of money to most people. Enough, I suspect, to tip the balance for many TV buyers between choosing a fairly high-end LCD TV and choosing this OLED set.

Also, while LG’s step-up OLEDs are better, the OLED55B8PLA still delivers the key benefits of OLED technology. In fact, it’s more or less on a par with last year’s excellent C7 OLED models.

If you can afford it, LG’s OLED55C8 is a significantly better picture performer. But the LG OLED55B8PLA still retains more than enough quintessential OLED quality to look like a serious bargain.