A gorgeous and great-value OLED from LG

Each year, LG releases a range of OLED TVs that’s better than its last. And each year, the ‘C’ model (along with its ‘B’ sibling) represents the best value. This year is no different: the LG C8 OLED deserves special attention.

This isn’t because it has the fanciest design or is the best performer of the range;  it just offers better value for money. What you get is the same picture performance as the more expensive LG E8 OLED, but with a more palatable price tag.

This TV does virtually everything right, but its biggest concern is its similarly priced LED LCD rival, the Samsung Q9FN. This offers a higher dynamic range and is more suited for bright-room viewing. It’s a tough choice, so let’s find out which model comes out on top. 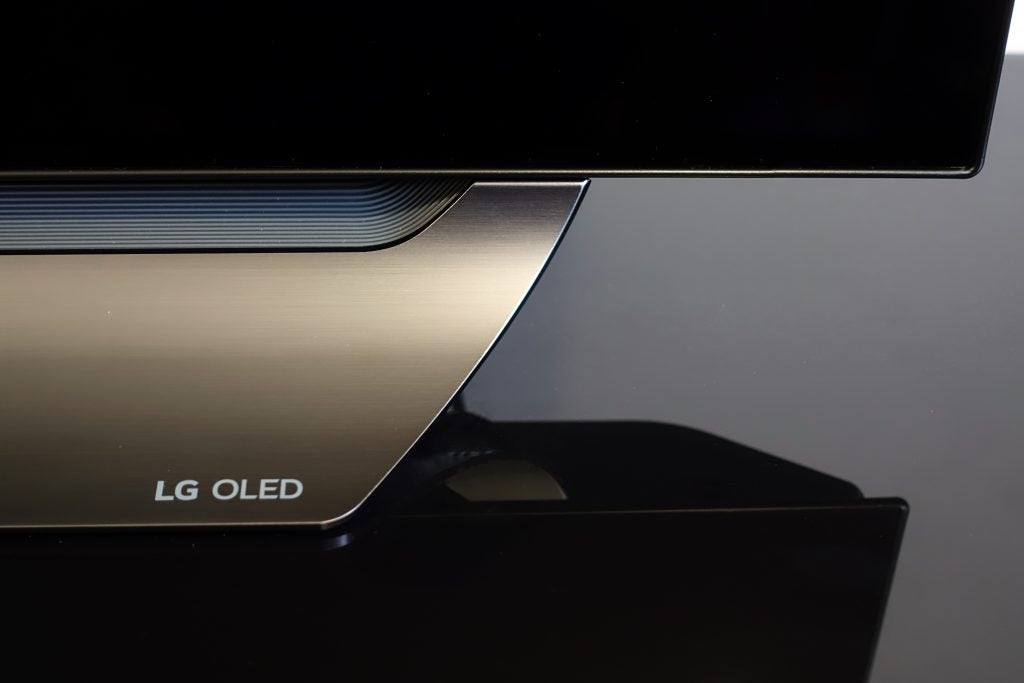 The last C-series TV from LG featured a modest central pedestal, but the LG C8 OLED is a little more showy. The metal slab is now longer (approximately 104cm), and it curves forwards. This is to redirect sound from the down-firing speakers so it fires forwards.

I like the look, and the unit is certainly more stable than TVs with central pedestals – but you’ll need a wider table or bench to accommodate it. If that’s a little boring for you, check out the LG E8, which sports a fancy glass design. Personally, I’d stick with the C8.

The C8’s screen is about the thickness of six credit cards, and the bezel isn’t substantial enough to dwell on. The bottom half of the back houses all the electronics, which takes the thickness to about 5cm.

Inputs include four HDMI ports, all of which support 4K and HDR input. Unlike the Sony AF8 OLED, the LG C8 OLED doesn’t use big plastic panels to hide cables. This isn’t an issue for me: I rarely look behind my TV. 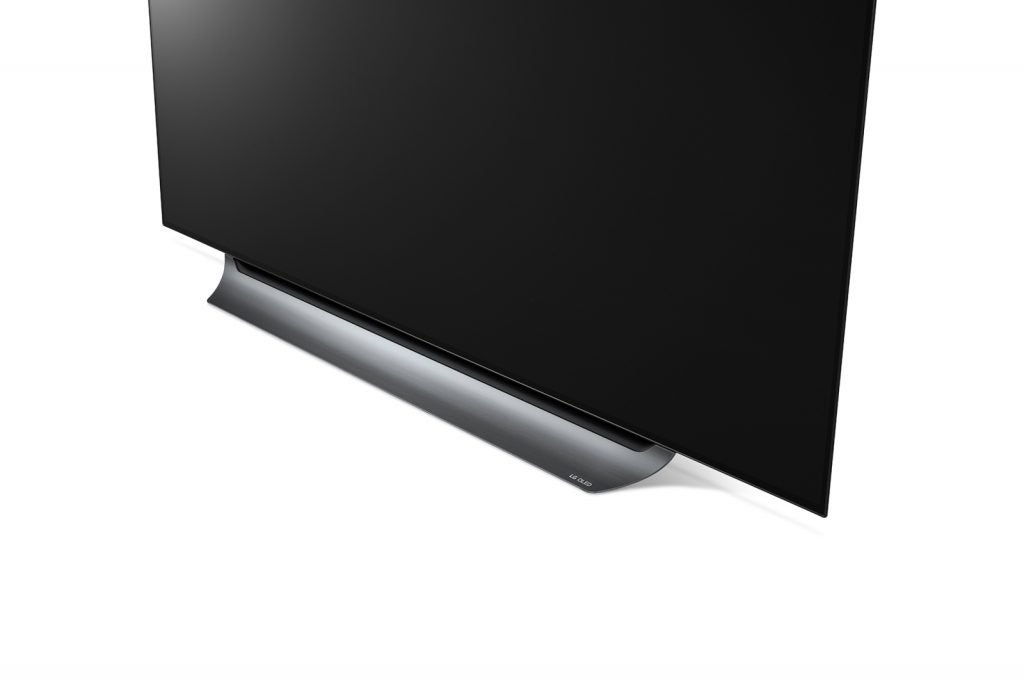 The ‘Magic Remote’ makes a welcome return. It’s a large (but ergonomic) wand that looks a little intimidating at first sight but is actually a joy to use. It has three control schemes in one: standard buttons, a wheel for menu scrolling, plus gyroscopes and accelerometers to control an on-screen cursor. Remember the Nintendo Wii? It’s a bit like that.

Another welcome sight is LG’s webOS interface, which has essentially defined how smart TVs ought to behave. Over the years the system has been tweaked, but the core offering remains the same.

The menu is a handy pop-up bar with a bunch of cards for apps, inputs and favourite channels. You may drag and drop them where you wish, navigate with the pointer, or go old-school and press buttons.

If only all smart TVs were this intuitive; Android TV (favoured by Philips and Sony Bravia TVs) has a lot to learn. The closest alternative is the launcher bar system used by Samsung, but even that isn’t as silky-smooth nor snappy as webOS. 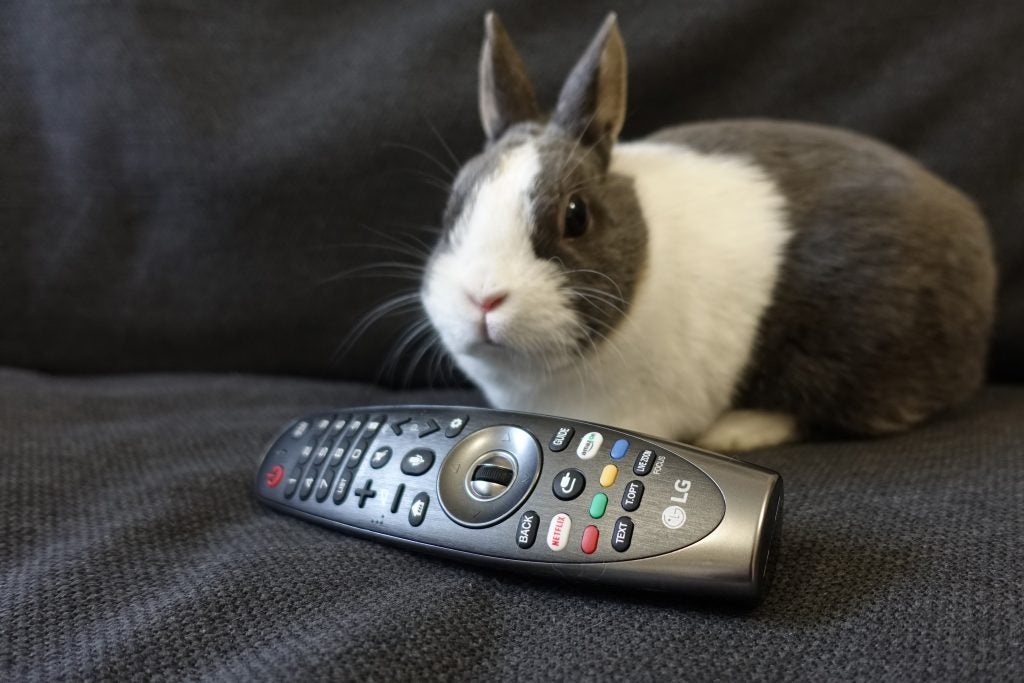 All the really new stuff is on the inside. The new Alpha 9 chip powers all of LG’s 2018 OLED TVs (except the entry-level B8, which uses the Alpha 7). LG tells me the Alpha 9 excels at noise reduction, sharpness and colour handling – all especially important if you’re upscaling non-4K content.

There’s also a new Dynamic Tone Mapping feature – which, if you ask me, is a bit of witchcraft in action. It adds dynamic adjustments to static metadata signals. Translation: vanilla HDR signals still get the scene-by-scene optimisation enjoyed by fancier (dynamic metadata) HDR formats.

Speaking of which, LG continues to support the greatest number of HDR formats – which is a good thing considering the HDR landscape is still a Wild West situation. The LG C8 OLED will accept the standard HDR10, the dynamic metadata-toting Dolby Vision, the broadcast-friendly HLG (Hybrid Log-Gamma) and Advanced HDR by Technicolor.

The only one missing is HDR10+, which has support from Fox, Warner and Amazon. It’s still too early to determine which format will become dominant, so I applaud LG’s agnostic approach.

The company tells me it’s focusing on processor tech this year, because the panel tech hasn’t changed much. We’re still dealing with a 10-bit panel with a 4K Ultra HD resolution and a marginally increased peak brightness of just over 800 nits.

Is it possible that OLED panel tech has peaked? Quite possibly, but given how good the LG C8 OLED looks, I’m not sure it needs to get any better. 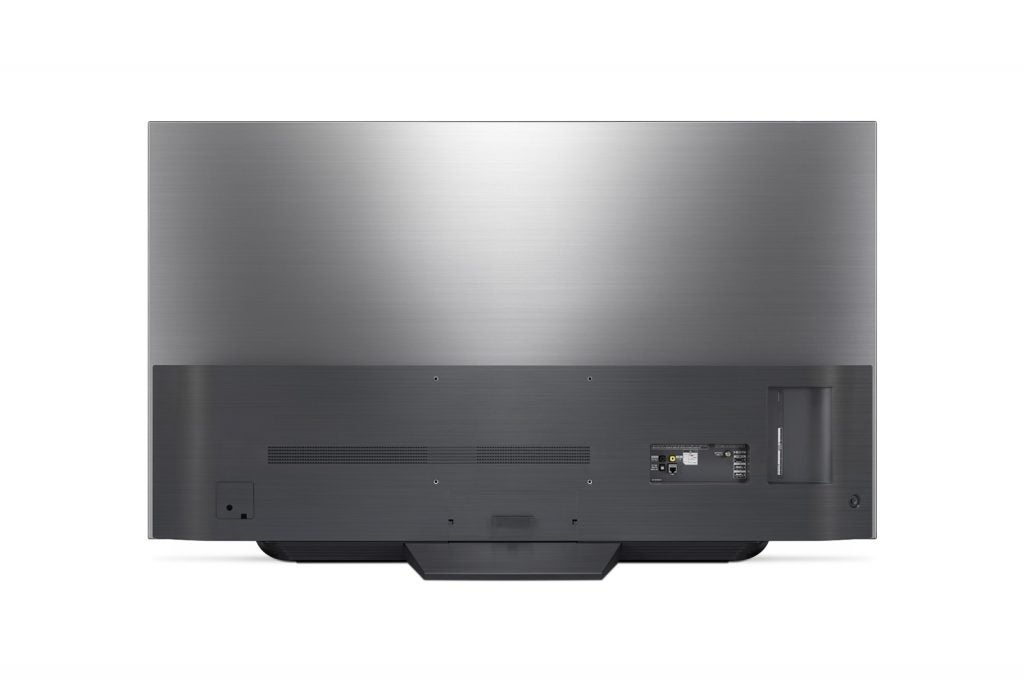 There’s no simpler way to put this: the LG C8 OLED is a stunning TV. Its pictures are gorgeous, and it’s hard not to marvel at the picture quality. If you ignore all factors and rivals and just buy this TV right now, you won’t be disappointed.

It doesn’t offer a massive jump over last year’s LG C7 and B7, but this isn’t a negative when you consider those models were already excellent. The C8 is definitely brighter, more detailed and more impactful, though.

Like all OLED TVs, the LG C8 enjoys pixel-level luminance, where each pixel is able to turn on and off individually. That means remarkable lighting precision that beats even the most accomplished FALD (full-array local dimming) systems found on high-end LCD TVs, such as the Samsung Q9FN.

You can have light elements next to dark elements with zero blooming or halo effects. In shadowy action films such as The Dark Knight or John Wick, it’s remarkable how dark areas remain unpolluted by nearby gunfire and explosions. If you want proper blacks, you’ve got it. 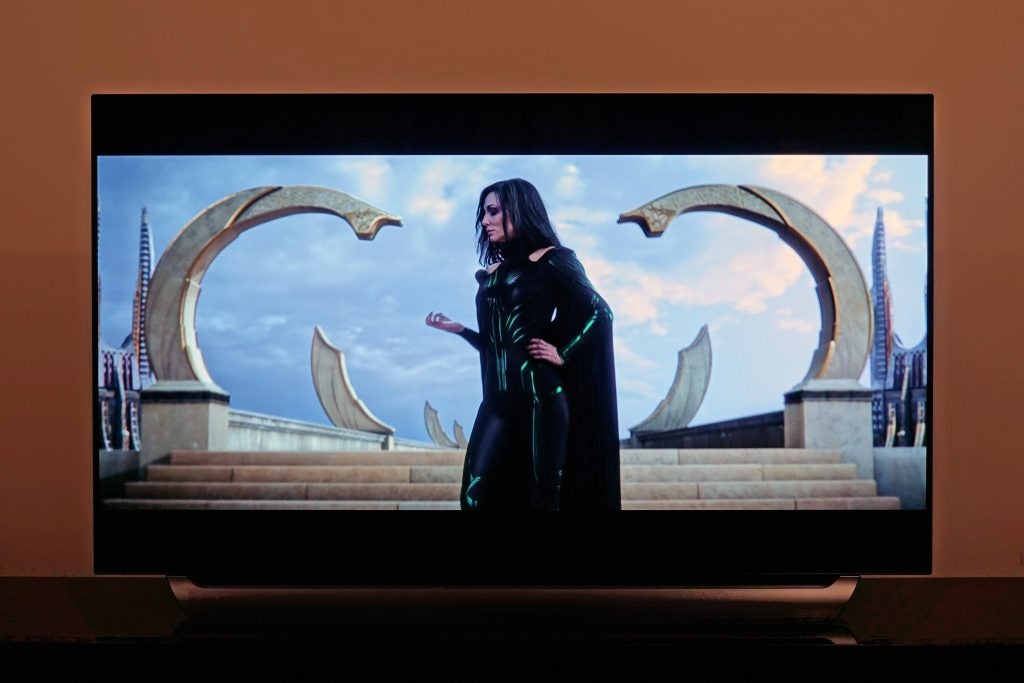 Perfect blacks are nothing new to OLED TVs, but the LG C8 does a great job at preserving dark detail in those areas just above black. It seems the Alpha 9 chip really works, since there’s little of the noise more prevalent on older OLEDs. Detailed shadows and zero light pollution: this TV would do very well in dark rooms.

Now for the other extreme: brightness. Historically, this has been an area that OLEDs have tended to struggle. The LG C8, however, doesn’t struggle. At least, not with the mixed-brightness shots that make up the majority of all content out there. Just watch Thor: Ragnarok and marvel at the way Jeff Goldblum sparkles. 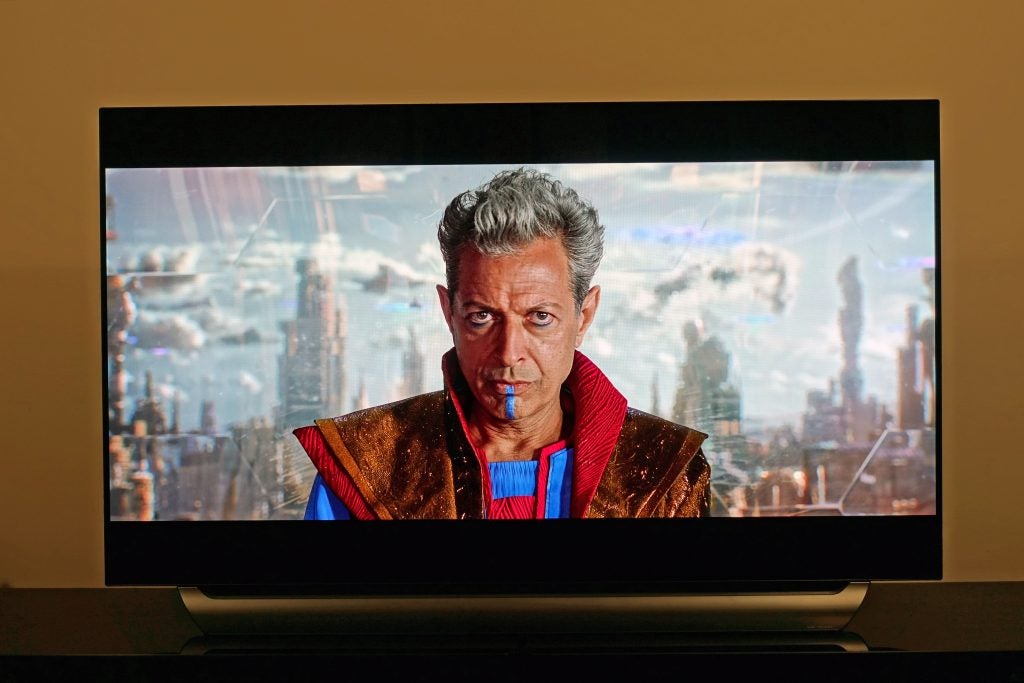 Obviously, the LG can’t hit the same 2000-nit peaks as the Samsung Q9FN. Nor can it offer the same lush levels of vividness in bright scenes. Nevertheless, it’s capable of impactful highlights and its colours don’t suffer any issues with saturation. Mostly bright scenes, meanwhile, don’t endure anywhere near the amount of clipping seen on older OLED models.

If you’ve been holding off buying an OLED until they got bright enough, now’s the time. That being said, I’d still recommend checking out the Samsung Q9FN if most of your viewing is in brightly lit conditions, or if you want that real HDR ‘punch’. 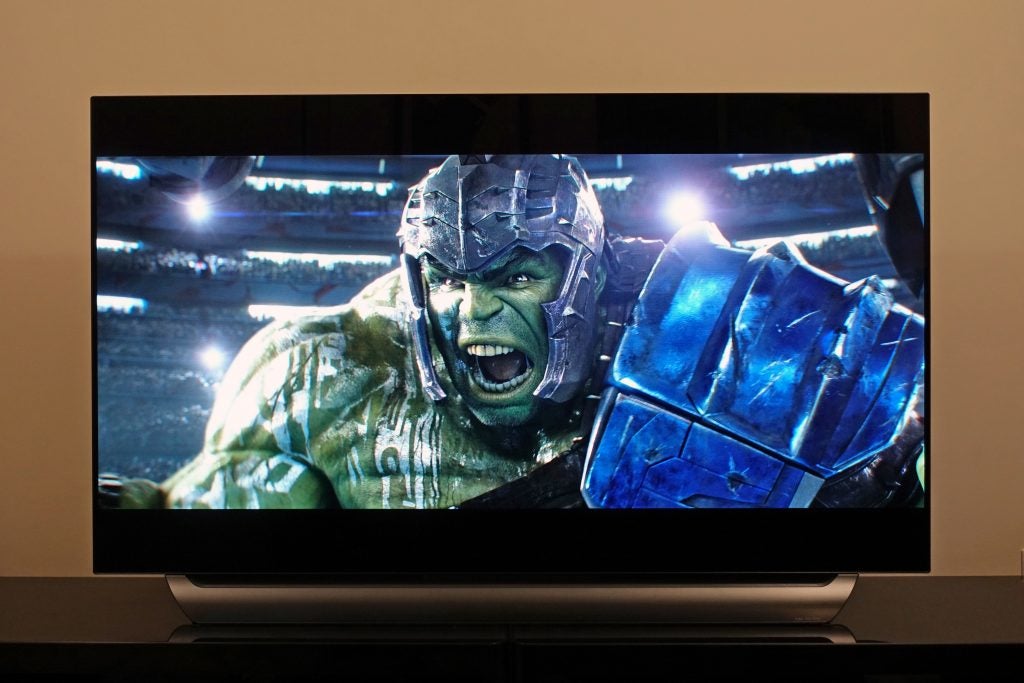 Then there’s the sharpness. This is a wonderfully crisp picture. In native 4K, some shots are the sharpest I’ve ever seen from an LG OLED – even sharper than the Samsung Q9FN. This crispness extends to upscaled non-4K sources, which enjoy nicely defined edges without much in the way of picture noise. Again, it appears the Alpha 9 chip works as advertised.

OLED continues to fly the flag for viewing angles. You can sit pretty much anywhere in the room without the worry of losing out on brightness and contrast. The Samsung Q9FN may be hugely impressive, but that limits you to about 35 degrees off-centre.

There’s one area I’m still not sure about, and that’s motion. LG has never been particularly strong in this department, and while there have been improvements, it isn’t a patch on what the Sony AF8 OLED and Sony A1 OLED can do. Sony manages smooth, natural motion but the LG was always a little too juddery for my tastes, or a little too glossy. I spent ages fiddling with the TruMotion and the new black frame insertion feature but, ultimately, I left them turned off and resigned myself to a little judder. 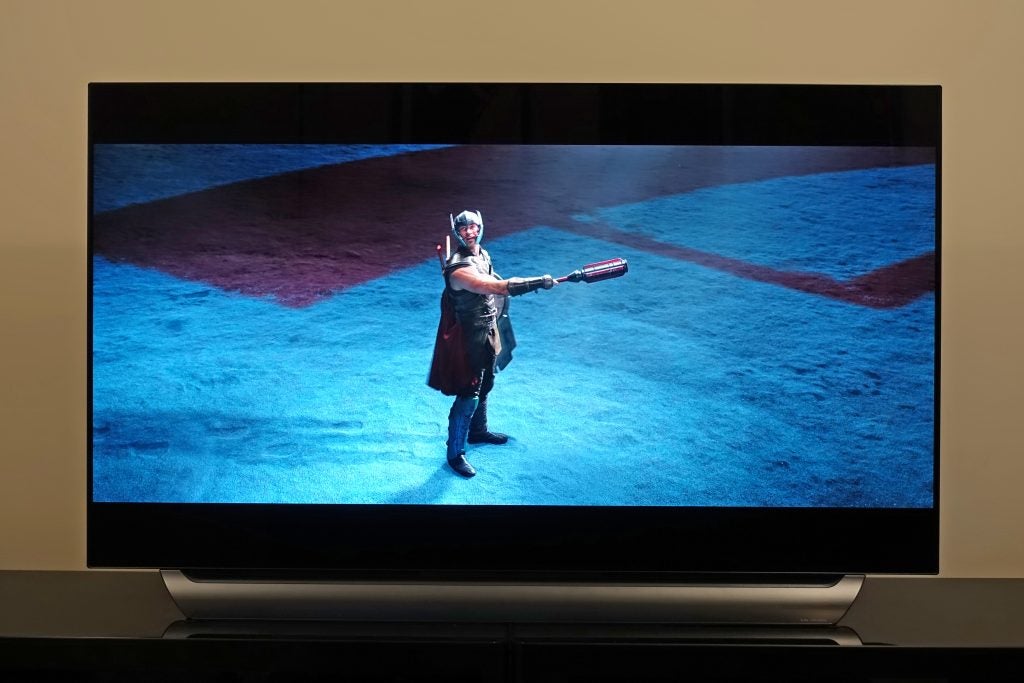 LG remains one of the best for gaming, however. The low-latency Game Mode displayed an input lag measurement of around 21ms. A less scientific approach: my week with the LG C8 OLED had me perform consistently better than my week with the Sony AF8.

As for sound, the most noteworthy feature on the specs sheet is Dolby Atmos. This TV can’t provide the full ‘dome of sound’ experience like a full-fat Atmos system with ceiling speakers, but it actually succeeds in providing a good sense of space.

The sound is certainly larger than you’d expect from the TV’s dimensions, and there’s a decent grasp of effects placement. Some sounds even feel like they’re coming from above the TV. Tonal balance isn’t amazing, though – it’s a little thin to do justice to bombastic movie soundtracks. If you want something to shake your house/wake your neighbours, consider getting a soundbar or some speakers. 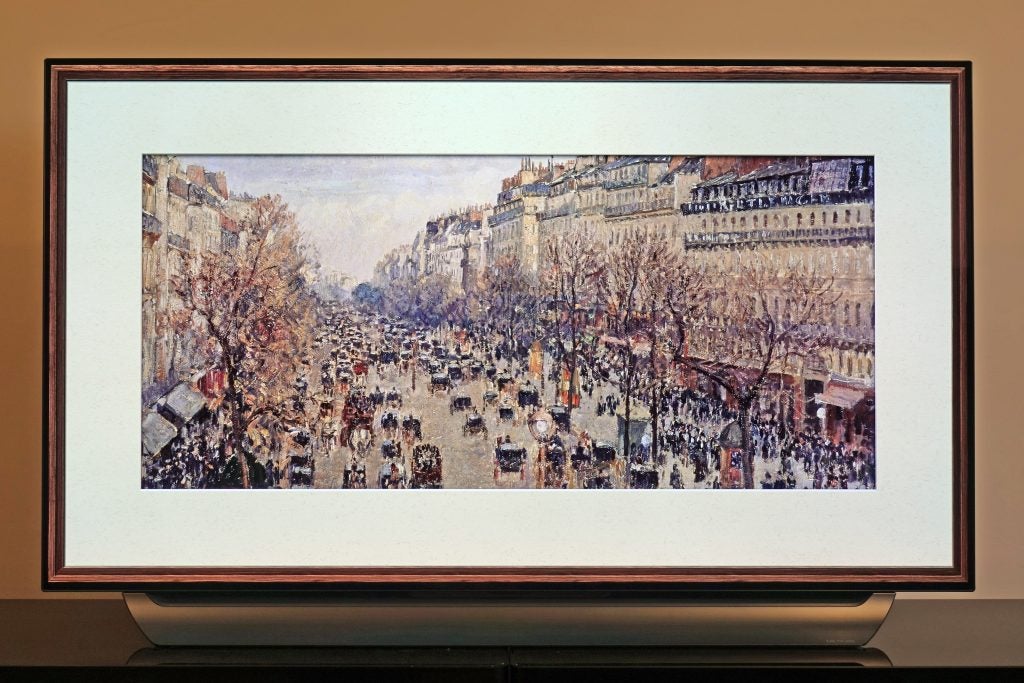 All in all, there are plenty of reasons to buy the LG C8 OLED. If you’re intending to do so, here are some setup tips. Avoid the Vivid mode. I generally alternated between Standard for day use and Cinema Home for night. The former is brighter and more punchy, while the latter is warmer and a little more subtle.

I already mentioned leaving the TruMotion settings off, but if you do want a little processing, I’d set it to ‘User’ and manually nudge de-judder and de-blur to three.

Of most importance is that you turn on the Dynamic Tone Mapping mode. Without this, the picture looks a little flat and muted. Don’t confuse that setting for Dynamic Colour, which can lead to accidental over-saturation. Turn that one off. 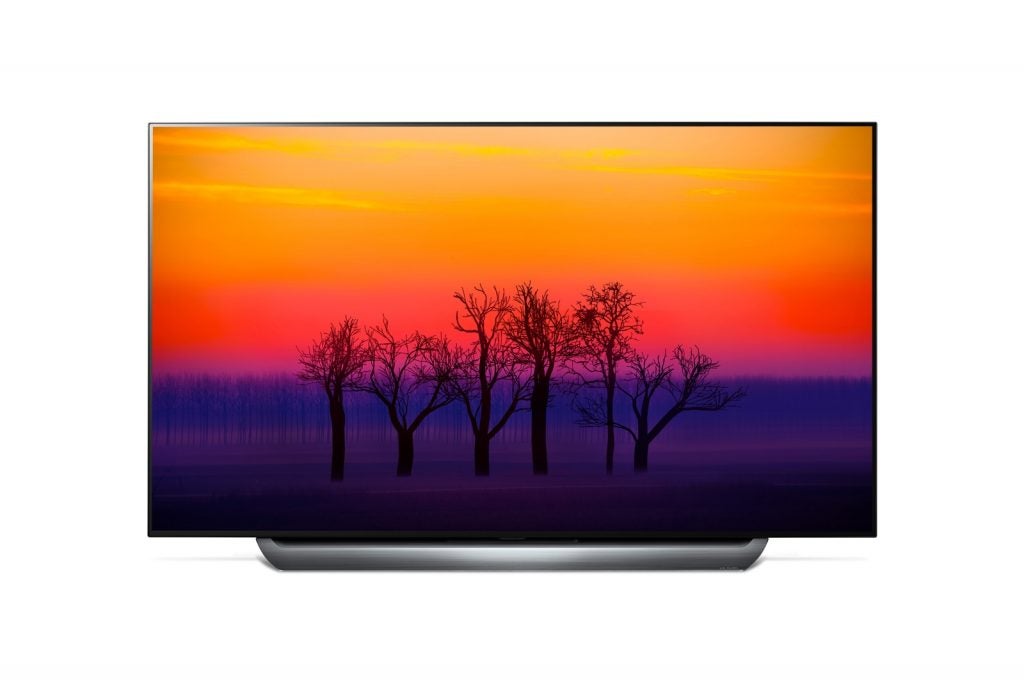 The LG C8 puts to bed any suggestion that OLED TVs aren’t bright enough or exciting enough for HDR. The panel tech itself may not have changed much, but LG has clearly found an effective way to optimise performance through clever processing. The results are stunning; if you have £3000 to splash on a TV, go ahead and buy the C8 – you won’t regret it.

There’s just one fly in LG’s ointment: the Samsung Q9FN. It’s similarly priced and excels in its own ways. It doesn’t have the lighting precision, but it can get almost as dark, and a whole lot brighter too – that’s a huge dynamic range. For those homes with numerous windows or bright lights, the Samsung manages a more versatile picture.

If you’re not in a hurry, however, you might want to wait a little. Sony has just announced a potential game-changer OLED in the form of the Sony AF9: Sony’s new Master Series 4K TVs could be the ultimate way to watch Netflix.

Another year, another gorgeous and great-value OLED from LG.