When it comes to sports and movies, the XF90 absolutely nails it.

The Sony KD-55XF9005  is a 55-inch, highly specified 4K HDR TV. It has a direct LED backlight, as opposed to edge lighting. For enthusiasts, this distinction is a big deal, not least because it addresses some of the most common issues with LED LCD TVs, such as tonal uniformity and HDR accuracy.

A combined replacement for 2017’s XE90, XE93 and XE94, the XF90 enjoys a number of significant improvements. The full-array LED backlight has been uprated for better contrast, while a new motion-handling technique called X-Motion Clarity has been introduced. The set also benefits from Sony’s flagship X1 Extreme picture processor, which is now trickling down the ranks.

By the end of the year, I fully expect this model to be a firm AV fan favourite. 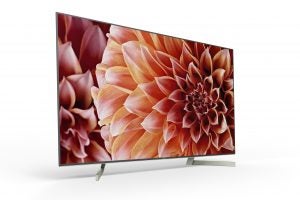 Sony’s design theme for 2018 is apparently ‘soft minimalism’, and while I’m not exactly sure what that means, the cosmetics of this set are definitely premium. The ultra-thin aluminium bezel has a gunmetal sheen, and the Bravia branding at the top left is tastefully subtle.

The TV comes with a new style stand. Feet edge out like Chaplin’s boots, but offer practical stability. They also provide a snug fit for a matching Sony soundbar.

Despite that direct LED backlight, the set isn’t overly deep at 69mm. A curved back panel helps disguise its fuller form factor. There are no surprises when it comes to connectivity. We get four 4K-ready HDCP 2.2-enabled HDMIs, plus a trio of USBs, mini-jack AV input, digital optical audio output and ethernet. There’s also a headphone jack and IR blaster port. Tuner options are twin satellite or Freeview HD. 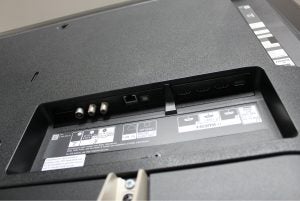 Like all Sony 4K TVs, the XF90 is built upon an Android TV OS bedrock. There’s no Freeview Play, but a YouView app replaces the standard Freeview programme guide and does much the same thing, integrating key channel catch-up TV players with a roll-back programme guide.

On the plus side, there’s built-in Chromecast, which allows direct casting from compatible apps, as well as support for voice control from both Google Assistant and Amazon Alexa.

In addition to Wi-Fi, the XF90 supports Bluetooth pairing with wireless headphones, for private listening. 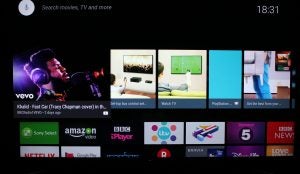 One thing that’s immediately noticeable about the XF90 is the integrity of screen tonality. Black backdrops are deep and smooth; a consequence of those direct LED clusters. X-tended Dynamic Range Pro adjustment allows the set to turn up and dim down for accuracy, but there is a limited to the precision of the backlight dimming. While I did notice blooming around bright objects held on a dark background (an occasional irritant, particularly if you view off axis), there’s no acute light pooling, and that’s a massive picture quality win.

During this evaluation, X-tended Dynamic Range was left on Medium. There’s a wealth of adjustments and tweaks, but Sony’s pre-calibrated settings are extremely well judged, so there’s no need for willy nilly changes. 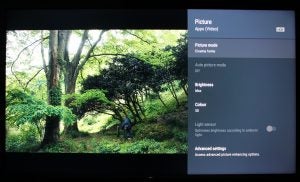 For sports content, I still rate MotionFlow Standard the best option. It retains detail, yet keeps artefacts to a minimum. For movies opt for MotionFlow TrueCinema or just Off (same difference), as this gives the most cinematic presentation and removes any sense of that sliding soap opera effect.

The set supports HDR10 and HLG, with the promise of Dolby Vision landing via firmware update somewhere down the road. The good news is that overall HDR prowess is high. The set has the ability to really ping out spectral highlights. I measured a sniff over 1000 cd/m2 (aka nits) with a 5 per cent window. 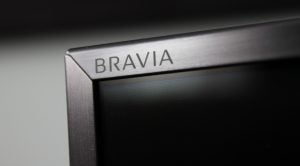 Despite this bright performance, HDR never glares, even with eye candy like Transformers: The Last Knight on UHD Blu-ray. That movie has a predisposition for backlights and halos, bright shafts of light, angry explosions and sparking robots, but the balance and depth maintained by the XF90 is impeccable. Its inherent brightness and a wide colour gamut mean there’s little need for errant tone mapping.

Perhaps what really surprised me is just how good HDR Vivid mode is. The crispness of detail and the depth of image it offers is extraordinary. Colour vibrancy is enhanced without unwanted garishness. It’s a real crowd pleaser.

The set’s audio performance isn’t too shabby, although I would hesitate to suggest that you won’t hanker for an exterior sound system. The TV has no back-panel woofer or forward facing drivers, just the usual stereo down-firing speakers. The power output is limited to 2 x 10w.

One area where the XF90 does flounder is image lag. This clearly isn’t optimised for gaming. With the Standard image preset, I measured input lag at 95.8ms. In the dedicated low processing Game mode, this only drops to 39.3ms, which is poor compared to some of its rivals. 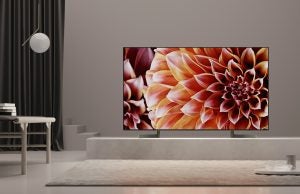 If you appreciate the vivacity of HDR and the expertise of Sony’s image processing, but find yourself distracted by unevenness of edge-lit LCD screen, the XF90 is most assuredly worth a closer look. There’s a smoothness to its FALD imagery that’s really captivating. The only real caveat is input lag – if you’re a serious gamer looking for a fast HDR-capable UHD display, I’d probably advise you pass.

The Sony KD-55XF9005 is a top flight mid-range LED LCD TV that makes effective use of its full array LED backlight. While it doesn’t have anything like the precision of Sony’s now legendary ZD9, the image benefits it offers over an edge-lit panel are enough to put it on the watch-list of any serious cinephile. Image clarity, contrast and wide gamut colour performance are all outstanding.

When it comes to sports and movies, the XF90 absolutely nails it. This screen is a great start to Sony’s 2018 TV campaign.