Panasonic first experimented with OLED in 2015 with the CZ952. It was a massive success.

The two TVs are largely the same on the inside, although the EZ952 is the more modest version, doing away with some of the fancier features of its bigger sibling. Crucially, the EZ952 will be more affordable.

Is the Panasonic EZ952 any good? Oh yes. It’s not the most punchy HDR TV on the market, but what it lacks in outright impact it repays in class leading colour fidelity and subtlety.
Related: Best TV 2017

The EZ952 and EZ1002 (EZ950 and EZ1000 outside of the UK) share many of the same features. It has a 2160p 4K/Ultra HD resolution and OLED panel. The panel is flat because Panasonic reckons nobody wants a curved one these days. Samsung is now the only one still pushing that form factor.

We’re also dealing with about double the claimed peak brightness of the last generation: whereas the CZ952 offered a peak brightness of around 500 nits, the EZ952 goes up to 950 nits in its 55-inch version and 1,000 nits at 65 inches. That’s comparable with some of the brightest LCD TVs from 2016, which is quite an achievement considering LCDs still struggle to match OLEDs for black levels. It means the EZ952 can comfortably dole out the dynamism demanded by high dynamic range (HDR). That being said, it’s still some way off the 2000 nits claimed by the top LCDs of 2017.

Speaking of HDR, the EZ952 is taking a future-gazing approach to HDR: it runs the common HDR10 format, but it will also be ready for Hybrid Log-Gamma (HLG) out of the box. There’s still no word on when we can expect HDR broadcasts, but it’s good to know that this TV has the capability to handle it when the time comes. Gamers will be happy, too: the EZ952 has a low-latency HDR gaming mode.

There is no 3D here. Panasonic is now the last brand still offering 3D in its 2017 TVs, but you’ll only find that feature on the Panasonic EX750.

Related: Hybrid Log-Gamma: Why it’s the next big thing in 4K TV 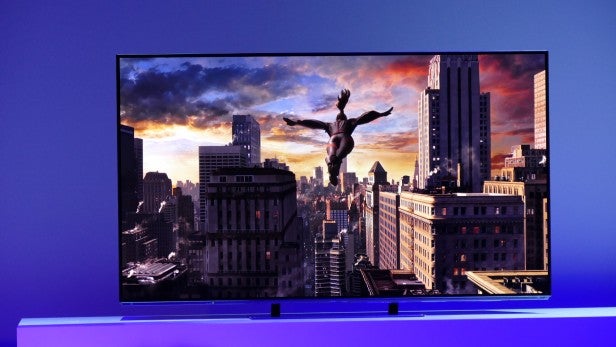 Sadly, there is no Dolby Vision and Panasonic tells me it’s not something that can be added later on with additional software. The key thing about Dolby Vision is that its dynamic metadata can let TVs know how to optimise the picture – but Panasonic is confident in its own in-house calibrations. They’re right to be confident – I’ll get to that later.

The EZ952 also shares the EZ1002’s powerful Studio Colour HCX2 processor, which boasts colour accuracy previously enjoyed only by professional monitors, and has been tuned by Hollywood colourists. It can handle nearly 100% of the DCI colour space. The EZ952 comfortably surpasses the minimum spec requirements for UHD Premium status. It’s also THX-certified.

As for software, the EZ952 uses the My Home Screen 2.0 interface, which incorporates elements of the old Firefox OS. It looks much the same, with big, clear graphics and the ability to pin your favourite channels and apps to the homescreen. A fresh addition is the ability to create your own folders, so the kids can leave your things alone. It’s nice to look at, and more intuitive than Android TV, but I still prefer the multitasking launcher bar interface offered by LG and Samsung. 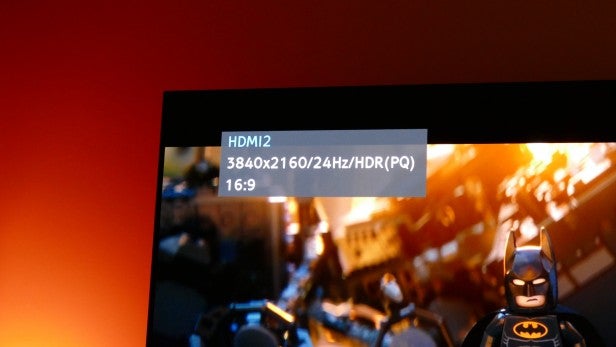 You’ll get 4K and HDR from Netflix, Amazon Video and YouTube. In the UK, you’ll also get Freeview Play, which lets you scroll back seven days on the programme guide and watch what you missed from the UK’s key catch-up apps: BBC iPlayer, ITV Hub, All 4 and Demand 5. At the time of testing, Amazon Video was not available – Panasonic tells me this will be available (via software update) by the time the EZ952 hits stores on June 27th.

As for what’s missing from the EZ1002? The most obvious omission is the speaker bar stand, tuned by Technics. The EZ952 is also missing the “Absolute Black Filter” enjoyed by the EZ1002, which is an anti-reflective layer designed to absorb ambient light and keep the blacks as pure as possible. It’s also some pro mastering features such as USB look up tables.

Is that a big deal? Well, the Panasonic TX-65EZ1002B costs £6999, which is £2000 more than the TX-65EZ952B. The pro mastering element is overkill unless you’re a professional studio colourist somehow dissatisfied with the wealth of fine calibration settings already on offer. The soundbar is nice, but you can have a good speaker system for a lot less, and I suspect anyone considering a £4800 TV might already have one of those. That leaves the Absolute Black Filter – for the £2000 saving, I’d rather just turn off my lights.

Basically, if you’re after a Panasonic OLED in 2017, the EZ952 offers significantly better value for money. 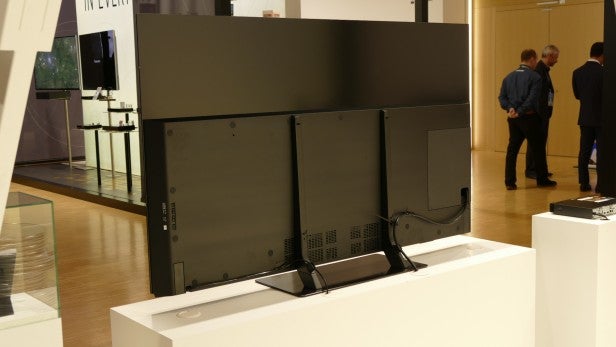 On the hardware front, it isn’t quite so exciting. Panasonic has opted for an understated approach. The EZ952 has replaced the EZ1002’s flashy soundbar stand with a simple pedestal stand. I applaud the use of a pedestal stand, because far too many TVs choose to have the legs spread wider apart, which just isn’t practical for anyone without a wide bench-style AV rack. I also like the two-pronged design of the pedestal – elegant and more stable than a single neck.

Move round to the side and rear and the understated, almost utilitarian vibe continues. It’s a slim TV thanks to the OLED panel, but not to the extreme – in the way that LG has opted for with its Signature OLED W7. Note the rear of the TV is mostly hard plastic, with a faux-leather appearance. Gone is the bizarrely strokable Alcantara lining from the CZ952. The most fancy thing here is the cable management system, which channels your wires down behind the pedestal’s two prongs. 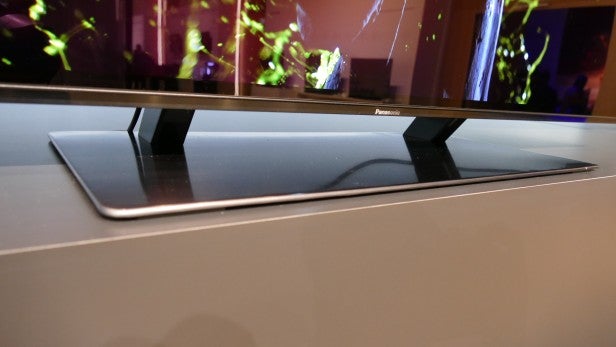 There are two remote controls: a full-sized traditional one with all the buttons and a smaller, simpler one with a touch-sensitive pad for swiping. I much preferred the traditional one as it’s more useful. It’s nicely made and laid out, and it has one thing most TV remotes lack – backlighting. Ten points to Panasonic.

I like the design; it’s humble without being dull, and pleasant to look at without being too showy. I prefer a TV that won’t distract me from the viewing experience, especially if the picture is good. Speaking of which… 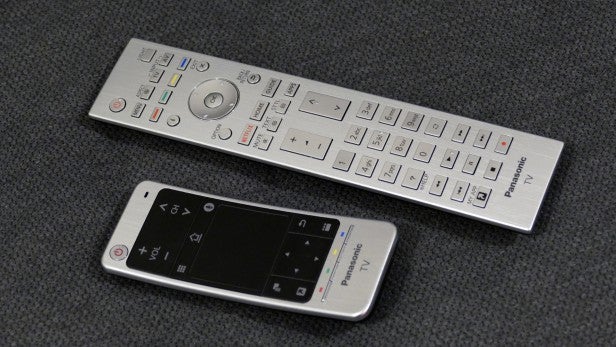 Contrast is greatly improved for a couple of reasons. First, the flat screen is far less likely to catch reflected light than a curved one, which means you don’t have to black out the room. Second, we’re now dealing with double the peak brightness, while maintaining the same impressively deep black levels.

It’s a big jump, and that difference is further accentuated by OLED’s ability to juggle areas of light and dark – while compromising neither. If HDR is about maximising the gap between light and dark to deliver visual punch, the EZ952 is a knock-out. It may not be as bright as the 2,000-nit Samsung QLED TVs, but unless you’re viewing in a bright room with lights on and curtains open, you can forget all about those numbers. I generally do my viewing in dimmed (but not totally blackened) rooms, and specular highlights had plenty of kick. 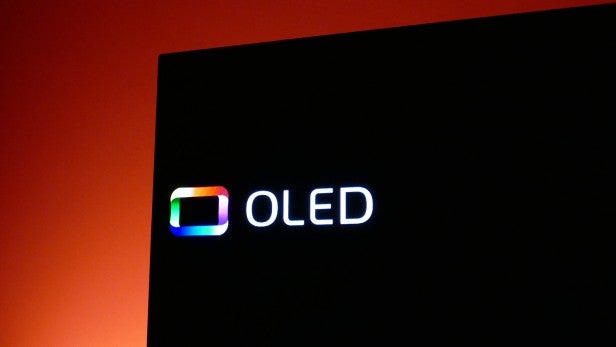 Panasonic’s experience with plasma is evident when it comes to shadow detail. Blacks are a lot less crushed than they used to be. Details that are just a step above absolute black are now visible. In both HDR and SDR, dark clothing maintains its texture – even trickier fabrics like velour.

Then there’s the matter of colours, which look superb. They’re lush without looking oversaturated or exaggerated, which was an issue with early OLED TVs – especially with regards to delivering convincing skin tones. Panasonic has clearly worked out how to handle subtle shading, because the EZ952 is great at it. I’d go so far as to say this Panasonic has the best colours I’ve seen on an OLED this year. There’s a lovely balance here – the picture is richer than that offered by the Sony A1, yet more restrained than anything offered by LG. It just feels natural. It just feels right. 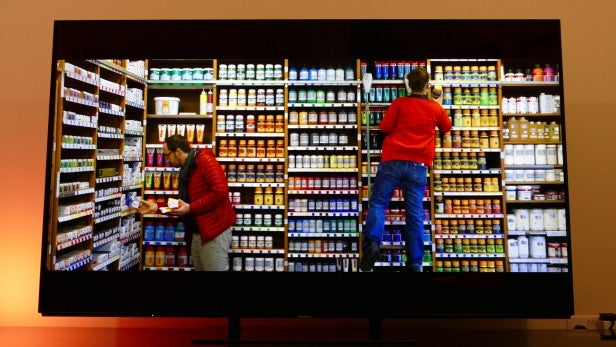 Against the competition? Well, the Panasonic EZ1002 definitely has an advantage in lit rooms. The Absolute Black Filter makes a compelling case for itself, with the EZ1002 handling show-floor lighting better than the EZ952. The dark areas were just a tad darker and better at handling reflections. Without the filter, the EZ952 does show up a slight tinge of purple/red when bright light is cast on it. Still, I don’t feel that difference is big enough to justify an extra £2000.

I have plenty of praise for the Panasonic EZ952, but it’s not perfect. I feel its colour handling and shading is top-tier stuff, but its rivals manage to balance things out in other departments.

The Panasonic EZ952 doesn’t have the most striking picture, so if you’re after something to wow your friends at a glance, this isn’t it. LG’s OLEDs manage that better, as its HDR performance offers more impact. While the Panasonic generally offers higher full-picture brightness, it suffers a little clipping in the brightest highlights – LG sidesteps this by lowering the overall brightness a little and and offering better highlight detail.

Samsung’s QLED TVs take that even further, offering a heavyweight punch that isn’t diminished by a bright environment. The Sony A1’s picture isn’t more dynamic than the Panasonic’s but it does do better when it comes to fine detail and texture, especially where HD/SD upscaling is concerned. 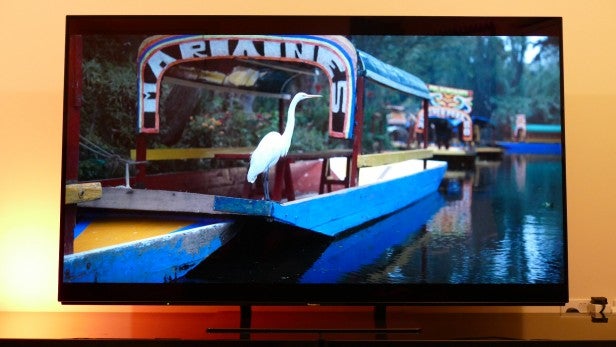 Does that make the Panasonic EZ952 lacking? Not necessarily – it’s a matter of priority. LG’s colours and shading are less subtle than Panasonic’s, and Samsung’s edge lighting issues mean its QLED TVs struggle in the dark. The Sony A1’s extra sharpness is nice, but there’s very little in it. And none of them feel as natural as the Panasonic.

There is one area where the Panasonic EZ952 falls down, and it’s sound. It’s far from terrible – there’s a decent amount of weight and the treble isn’t shrill. I was happy enough watching a few episodes of House of Cards, but it just doesn’t do justice to big movie soundtracks. This TV needs to be partnered with some proper speakers.

A word for the gamers: the Panasonic EZ952 is one of the better TVs for latency. I recorded an input lag of around 25ms on average. That’s very good – not as good as the 21ms that LG offers, but better than the 40ms or so on the Sony A1.

Oh, and a few set up tips: I preferred to use the TV on Cinema or True Cinema setting, as these do away with a bunch of superfluous processing modes. The Intelligent Frame Creation setting for motion processing should be turned off or at most set to very, very low – this TV doesn’t need it. 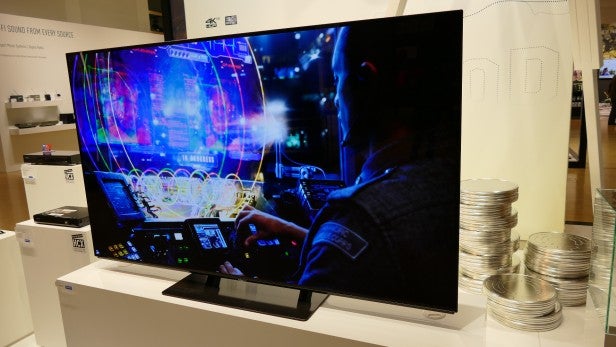 It’s clear Panasonic is applying lessons learned from its plasma days, because the EZ952 looks fantastic. More importantly, it’s barely distinguishable from its flashier sibling, the EZ1002, and is a no-brainer if you’re after a more affordable OLED – or if you don’t care about the speaker bar stand.

The best thing about the EZ952 is how natural it looks. I love its colours, which are the most realistic and convincing I’ve seen from an OLED this year. Many TV manufacturers say the usual blurb about giving consumers the picture the director intended, but I’d say Panasonic comes the closest to that, at least where colours are concerned.

It’s not for everyone, though – if you’re after a TV for outright impact, you may be better off going for an LG B7 or LG C7. Then there’s the Sony KD-65A1, which offers greater detail along with a very good sound system. For similar money, the Samsung QLED QE65Q9F is better for those with a habit of bright-room viewing.

The EZ952 is the best TV Panasonic has made in years.