What is the Lenovo Yoga Tablet 2?

The Yoga Tablet 2 is the little brother of Lenovo’s Yoga Tablet 2 Pro. Available from £249.99, it’s positioned in the middle of the market, and is actually quite cheap for a 10-inch tablet.

What you get, however, is a very capable machine that can easily handle high-end games and has excellent stamina. Its screen isn’t as impressive as those of the iPad Air 2 or Samsung Galaxy Tab S 10.5, but its clever hinge makes it both eye-catching and incredibly versatile. 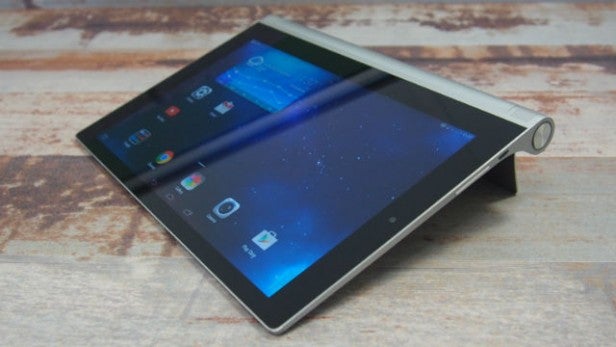 With so many tablets looking like carbon copies of each other, often only identifiable by the logo slapped across their rear ends, it’s refreshing to see Lenovo build something that stands out from the crowd. The Yoga Tablet 2 doesn’t look like any other device on the market. While we love that, it’s certainly going to polarise opinion.

Three of its sides are completely normal, while a cylindrical bulge is attached to one of its longer edges. This results in a device that looks a bit like a crotchet from the side, and this isn’t just for show. It houses the battery, speakers, power button, headphone jack and the kickstand which gives this particular line of tablets its Yoga name.

When retracted, the stand tucks neatly into the Yoga Tablet’s rear, sitting flush with the textured silver plastic. By gently squeezing and twisting the cylinder, you can release it from this recess.

It rotates almost 180 degrees once you’ve whipped it out and locks into one of three positions – closed, fully extended and half-way between the two – though it will also rest in an in-between angle if that’s best for you. It holds firm in all positions, making for a pleasantly sturdy experience.

This is where the Yoga Tablet comes into its own. It’s designed to be used in multiple modes, which Lenovo defines as hold, tilt, stand and hang. While the first of these needs no explanation, the others do: Tilt – lying on its back like a traditional tablet, propped up by the bulge; Stand – standing upright like a laptop screen; and Hang – when it’s suspended from a hook.

Tilt is the most versatile of these. It works well if you’re using the Yoga on your desk or lap and browsing the internet or composing emails, or even on your chest if you’re lying down. Stand, meanwhile, provides the perfect angle for watching movies and TV shows, though you require a flat surface to place it on.

While it may sound like a gimmick, hang mode can be handy if you’ve got a hook or two in the right place. It will work beautifully in the kitchen for browsing recipes or watching catch-up TV, for instance, where you’d need a special mounting case for other tablets. 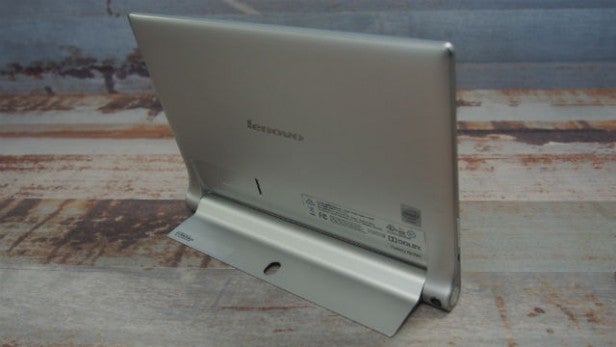 Unusually for a tablet, hold mode is the most problematic. The Yoga weighs a monstrous 619g – that’s 182g more than the 9.7-inch iPad Air 2 and only 43g less than the 10.8-inch Surface 3, which isn’t a pure tablet. This makes it impossible to use in one hand for more than a couple of minutes, despite the bulge making it easy to grip.

In most cases, this would stand as a major shortcoming, but not for the Yoga. The reason it’s so heavy is due to the kickstand, which is there to ensure you never really have to hold the tablet. It would be almost like marking down a dumbbell for not being travel-friendly. The benefits far outweigh the drawbacks.

Overall build quality is almost as impressive as the stand. The rest of the tablet may be clad in soft-touch silver plastic, rather than aluminium, but it’s still very attractive. The subtly-patterned rear feels nice on your fingertips too, and brings a little texture to the look.

The Yoga is 7.2mm thick at its slimmest point, and around three times that at its thickest. While it’s nowhere near as sleek as the 6.1mm iPad Air 2, it’ll still easily fit into any standard messenger bag or rucksack, though take extra care if you want to keep it looking pristine. Unfortunately, we noticed the silver plastic on the corners and edges of the cylinder chipping away after a few journeys in our bag. It’s only a cosmetic issue, but we expect better at this price.

In stand mode, the volume rocker sits on the left-hand side, with the power button below it, right at the edge of the cylinder. The headphone jack is on the opposite edge. Around the back, the microSD card slot and SIM tray are hidden away neatly by the closed stand, and the camera sits on the backside of the bulge, close to the power key.

It’s a sensible layout that keeps the Yoga looking largely clean and uncluttered. The one major downside we came across is that it’s far too easy to accidentally hit the power button when you’re holding it in landscape mode, which leads to the display switching off and general annoyance. 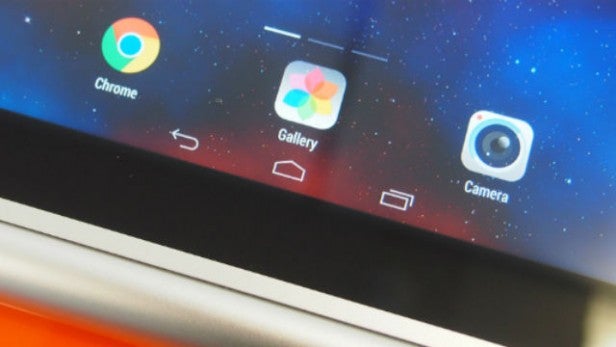 Its display may not quite measure up to those of the Samsung Galaxy Tab S 10.5 (288ppi) or iPad Air 2 (264ppi) for sharpness, but the Yoga’s 10.1-inch, 1,920 x 1,200 IPS screen is still good for watching movies. With a pixel density of 224ppi, it’s not far behind its rivals, and only the fussiest of consumers would find fault with its clarity.

Because it uses an IPS panel, viewing angles are excellent too, making it great for mini-screenings amongst a small group of friends. Colours are vibrant, and the highest brightness setting is good enough for watching TV outside in the sun. Black levels aren’t perfect, but you’ll only really notice this when you’re watching a particularly shadowy scene in a dark room.

Lenovo offers the choice of three display settings: vibrant, normal and matt. Matt is a strange option, since all it does is act as a sepia filter. Meanwhile, vibrant makes colours appear a little punchier than they actually are, while normal stays true to reality. The former of these can sometimes go too far, turning healthy hues into unnatural-looking peachy shades, though normal can look dull and lifeless by comparison. However, it’s quick and easy to switch between the two to find what’s best in different lighting conditions. 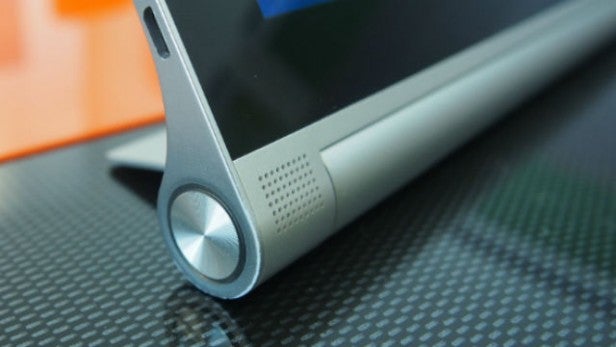 As you’d expect, touch responsiveness is great, with gentle swipes allowing you to zip between screens and apps. This also makes it great for composing emails. The onscreen keyboard is a decent size for typing on, so you can write messages up in no time. We wouldn’t use it for laborious office tasks, but for short jobs it does the trick. Another bonus is that fingerprint marks don’t appear totally obvious, even if you’ve got sweaty mitts.

Beneath the display, at each end of the bulge, sit a pair of front-facing Dolby stereo speakers. One criticism that can be aimed at a multitude of tablets is that their speakers are easy to cover with your hands, but that doesn’t apply here. Sound waves are blasted at your ears no matter what mode you choose to use the Yoga in. Even sticking it on a soft, uneven surface, such as a bed, has no noticeable detrimental effect. As a result, overall volume is also impressive.

The pre-installed Dolby app allows you to tinker with various audio settings, such as the equaliser, dialogue enhancer and surround virtualiser. However, there are specific pre-set configurations for movies, music and games, which you can also customise.