What is the Lenovo Yoga Tablet 2 Pro?

Too many manufacturers churn out tablets that look like iPad knock-offs, but Lenovo usually forges its own path. Its Yoga Tablet 10 HD+
debuted an exciting, lop-sided design that enabled several different
positions, and the Yoga Tablet 2 Pro builds on that foundation. 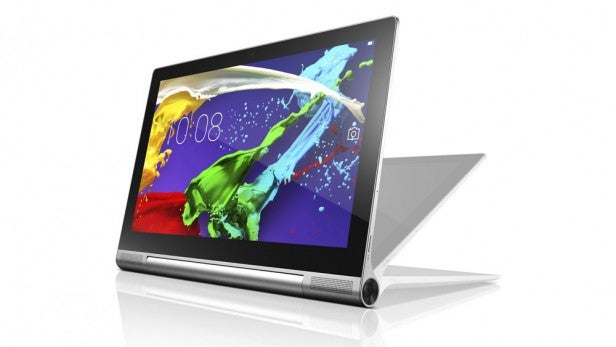 The
Yoga’s cylindrical side defines its style and functions. It houses a
hinge that enables the Yoga to switch into four different positions, and
it also contains a couple of features we’ve never seen on a tablet: a
subwoofer and a pico projector. 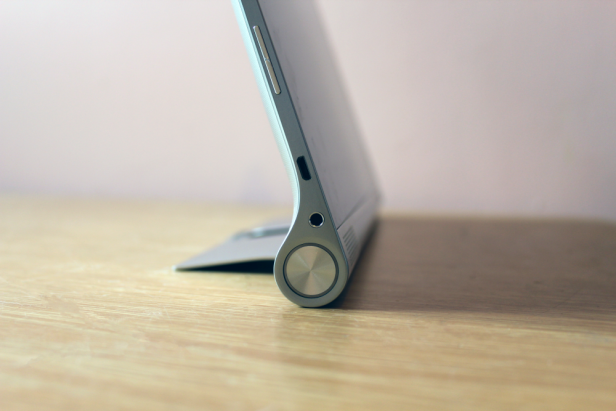 The stand props the Yoga into
shallow and steep angled positions, with the former ideal for typing and
the latter better for watching films. The stand can be tweaked for
precise angle adjustments, and it’s sturdy enough to stay put once
positioned. 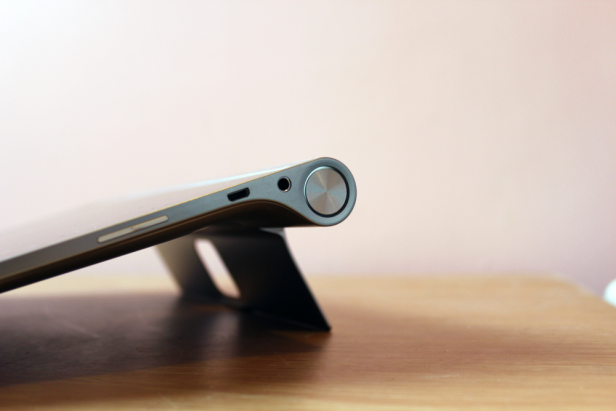 It’s been improved since the last iteration of the
Yoga. It used to be fiddly to unfold, but Lenovo has installed a button that pops the stand open. The stand also has a hole that enables
its third position – hanging. It’s the mode we see getting the least
use, but it could be handy for presentations. 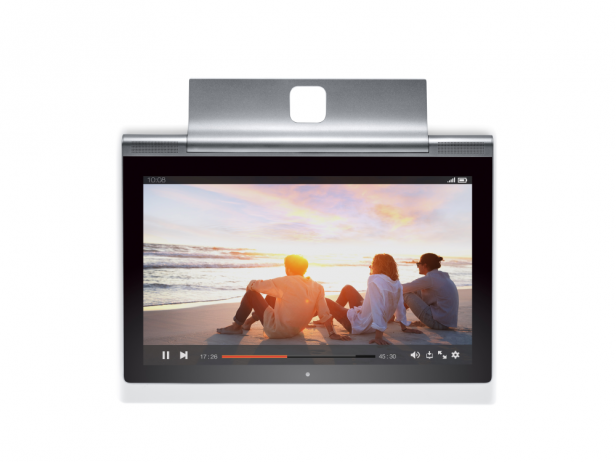 The whole machine
exudes high quality. One end of the cylindrical unit houses the circular
power button, and the other reveals the projector’s glass-covered lens.
The stand and its button are made from solid aluminium, and the rest of
the unit is hewn from similarly-sturdy metal and plastic. The Yoga
costs £449, but you never forget it’s a premium product. 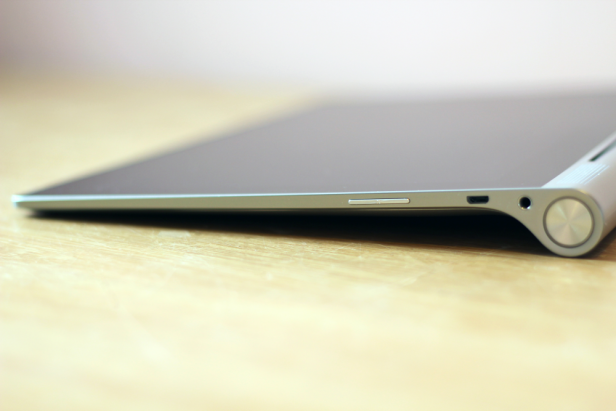 The
cylindrical side unit makes a useful handle, but it means the Yoga is
larger and heavier than rivals. It’s 23mm thick at its bulkiest point,
the main tablet section is 9mm thick, and it weighs 948g. Apple’s iPad Air 2 is less than half the weight at 437g and just 6.1mm thick, while the Google Nexus 9 is even lighter at 425g and is over a millimetre slimmer.

The
weight doesn’t make the Yoga particularly comfortable to use in one or
two hands, and the off-centre hinge hinders its ability to fit inside
cases, too. That’s not the only ergonomic issue we’ve encountered – the
sheer size of the 13.3in screen can make the panel difficult to
navigate, with controls in games and apps sometimes tricky to reach.

There
are no surprises when it comes to connectivity. We’re pleased to see
dual-band 802.11ac wireless, and there’s Bluetooth 4.0 and a microUSB
slot. GPS and an accelerometer are included, too, but there’s no sign of
mobile broadband.

Lenovo
has increased the resolution, but the larger screen means that
pixel density actually sees a small decrease – the old Yoga had a
density of 224ppi, while the new tablet sits at 221ppi.

That
figure doesn’t stand out when compared to the wider market, either. The
iPad Air’s screen serves up 253ppi and the Nexus 9 is even better, at
288ppi.

The Yoga’s density may not stand out, but it’s still
enough to ensure a sharp image – we only saw individual pixels by
squinting, and the resolution is ample for Full HD media playback. 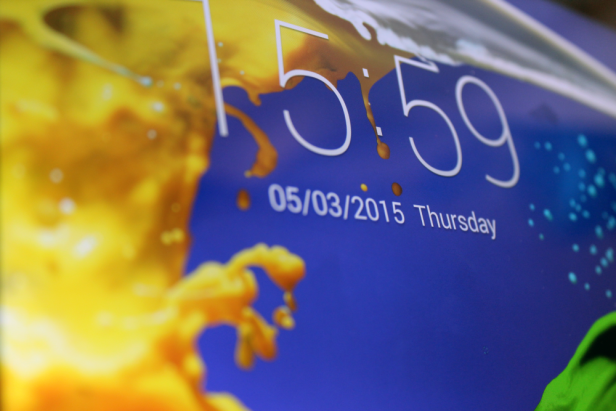 The
Yoga’s panel ticked most of the quality boxes, too. Colours are
consistently punchy without straying into oversaturation, and bright
colours are particularly dazzling. Backlight bleed is absent, and it’s
IPS, so viewing angles are excellent – you can watch media on this
screen even if you’re off-centre.

The brightness level of 389
nits is fantastic, too – better than the previous Yoga, and beyond most
laptops. The black level of 0.59 nits is reasonable, but other tablets
have deeper blacks. It might be noticeable during darker scenes in games
or films but, for the most part, it’s a minor problem that won’t
interfere in daily use. 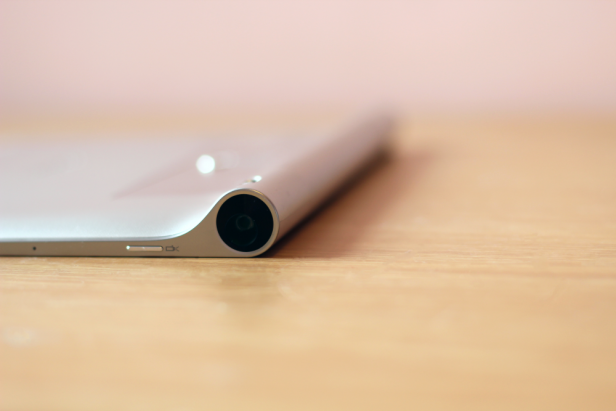 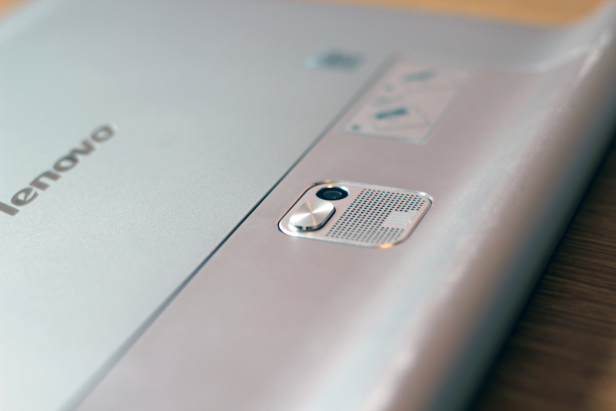 Lenovo has used the hinge to install
serious audio kit – two 1.5W stereo speakers and a 5W JBL subwoofer.
They provide volume comparable to Apple’s latest iPad, and the subwoofer
serves up punchy bass. Those deep notes, though, hinder audio
elsewhere, with mid-range and high-end notes not as rich or as pleasing
as we’d like.

The Yoga’s speakers certainly aren’t bad, with enough volume and quality for movies and music, but the iPad is still superior.

The
Yoga Tablet 2 Pro arrives with Android 4.4.2 installed – an iteration
of the OS that’s more than a year out of date. The latest version of
Android, 5.0 Lollipop, appeared at the end of 2014.

The older
Android version means the Yoga misses a few features. Lollipop’s new ‘material’ design language, the revised notification area and improved
lock screen are absent, and developments under the hood to improve
performance and battery life are also missing

Lenovo has made up
for the lack of Lollipop with its own changes, but these aren’t always
successful. The settings bar is stuffed with options, but it’s unfurled
from the bottom of the screen, which differs from virtually every other
Android device. The visual design isn’t exactly Android – it
seems to draw just as much inspiration from iOS.

There’s no app
drawer, either; instead, apps are installed to a couple of home-screens
or dumped into a selection of categorised folders. The folders can’t be
deleted or edited, though, and the Yoga often interrupts apps to ask
where freshly-installed software should be kept – irritating if you’re
playing a full-screen game.

Lenovo has augmented Google’s OS
with a few apps of its own, but quality is varied. The Security HD tool
is placed front-and-centre from boot, but it’s hardly the sort of
all-conquering business app we expect from Lenovo; it’s got options to
free memory by closing apps, or to block ads by scanning software, but
the only real security feature on offer involves altering permissions
for dozens of different components and usage scenario. It’s a good
feature, but it noticeably stands alone.

Lenovo’s business
credentials are more obvious elsewhere. Accounts, settings,
applications, media and other files can all be encrypted with passwords
or PIN numbers, and administrator settings can be altered from the
settings menu. A power management tool can dial down the GPU and screen
to save power, or disable apps when the screen is turned off.

The
Yoga makes an attempt at multi-tasking by using separate windows, but
only a few apps can be loaded into a new window, including Chrome, the
file browser, video player and email. It’s useful, but we can’t help but
think that Lenovo could have gone further.

A Dolby app is
included to beef up the audio and has a custom equaliser as well as
modes for movies, games and music, and the bundled software is rounded
off with apps for synching, sharing and cloning files.