Android 5.0 Lollipop isn’t exactly brand-spanking-new anymore, but the Yoga Tablet 2 runs an even older version of the software – Android 4.4 KitKat. It’s not a pure version of Android, and is overlaid with Lenovo’s own user interface. In comparison to Samsung’s TouchWiz, it’s quite a subtle skin, but it still has a big effect on the user experience.

The most glaring change is that Lenovo has done away with the app drawer, with all programs instead appearing on your various home screens, much like Huawei’s Emotion UI. It’s a good setup if you’re organised, since you can instantly access your go-to apps, though it takes some getting used to if you’re more familiar with vanilla Android.

Something we definitely don’t like is the fact that quick settings are split between two separate menus. When you swipe down from the notifications bar on an Android device, you’re usually presented with your app notifications and a small list of quick settings including Wi-Fi, brightness and the screenshot key. The Yoga unfortunately only delivers the former, forcing you to swipe up from the bottom of the screen to tinker with settings. 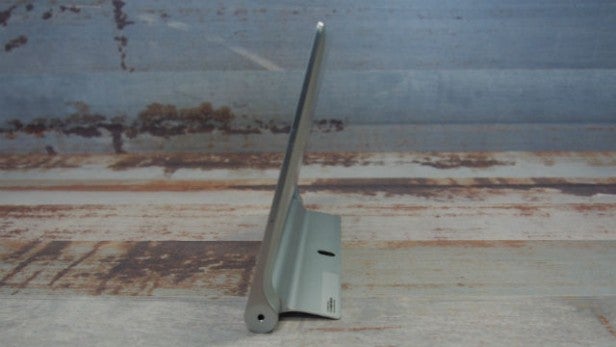 It’s a pointless tweak that only succeeds in slowing you down. What makes it more puzzling is that an additional two menus launch from this part of the display. One of these is a list of widgets you can choose to add to one of your home screens, offering up different styles of batteries and calendars, as well as graphics from third-party apps, such as Twitter and Evernote.

The other is the multi-window menu, which lets you use up to three different applications on one screen, just as you would on a PC. You can resize these and move them around at your will, but the function isn’t as useful as we hoped it would be. This is because only a very limited number of apps are actually multi-window compatible.

You can only open Chrome, the native email app, gallery, file browser, video player and calculator in this view. We imagine Evernote and Skype could work brilliantly in this manner, but they’re sadly not available as options.

Elsewhere, there’s assistance in the form of the User Guide app and Yoga Tablet 2 app, which help you get to grips with Android and the tablet itself, respectively. They provide comprehensive levels of support, and are great for first-time tablet owners. 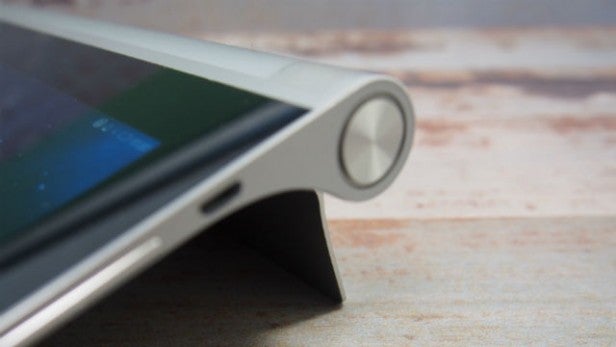 The Yoga is powerful, but not quite a match for some of the other top tablets on the market. It runs on a quad-core Intel Atom Z3745 processor clocked at 1.86GHz, along with 2GB of RAM.

This combination helps the Yoga score 2,383 in the Geekbench 3 multi-core speed test, placing it just behind some of the most expensive tablets available. The Yoga Tablet 2 Pro (2,517) and Samsung Galaxy Tab S 10.5 (2,669) are slightly speedier, but the iPad Air 2 (4,509) stands well ahead of the pack.

The result is a tablet that can blitz through everyday tasks such as browsing the web, composing emails and watching movies. It’s powerful enough to handle complex 3D games too. Favourites such as Asphalt 8, Dead Trigger 2 and Real Racing 3 play beautifully smoothly. There are no overheating issues either. The rear warms up a touch during particularly intensive use, but it never affects performance. 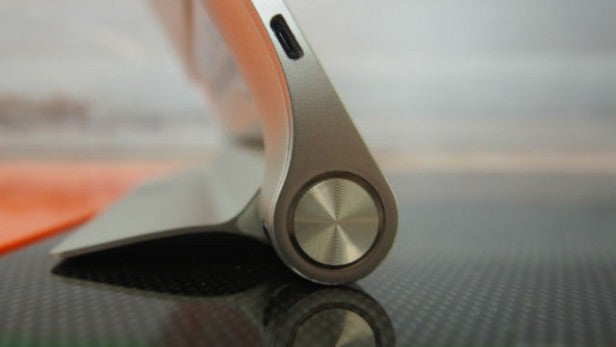 Our review unit came with 4G LTE and 16GB of inbuilt memory. However, if you’re happy only using the Yoga at home off the back of your Wi-Fi connection, you can save yourself £30 and gain an extra 16GB of storage in the process.

Whichever model you opt for, you can boost storage via the microSD slot, which accepts cards that are up to 64GB in capacity. In stand mode, a microUSB port sits on the left-hand side of the Yoga, between the power and volume buttons. There’s no NFC, so you won’t be able to make quick payments on the move, but the Yoga is Bluetooth 4.0-enabled.

Lenovo hasn’t revealed the capacity of the battery enclosed within that unique bulge, but claims it can stand up to 18 hours of mixed use between charges. With the screen set to 80 per cent brightness and volume at 40 per cent, the Yoga went from full to empty in 10 hours and 48 minutes while playing YouTube videos. This is a good result, and mixed use will easily get you a few days on a single charge.

However, it’s not the quickest charger in the world. 30 minutes at the socket restores 13 per cent of its battery, which would theoretically provide 84 minutes of use. A complete charge takes five hours. 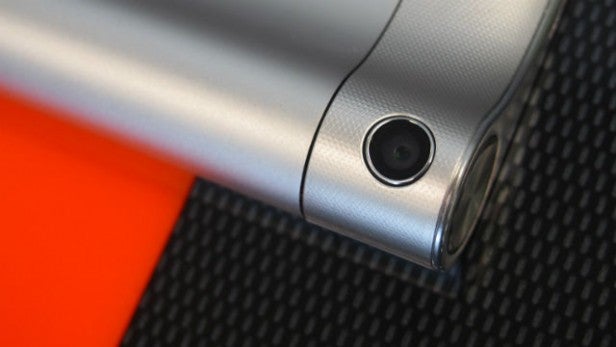 The same 8-megapixel primary camera and 1.6-megapixel front-facing camera setup seen in the Yoga Tablet 2 Pro is used in the Yoga Tablet 2. The level of detail the primary snapper captures is okay, but it struggles noticeably in both bright light and low light, overexposing highlights and shrouding dimly-lit areas of the picture in black shadow. Colours also appear washed out and uninspiring. However, it’s important to note that these are common tablet issues.

We’re disappointed that the main sensor doesn’t come with HDR mode, but it does pack a few handy photography-enhancing extras including grid guidelines, panorama and macro modes, and a level line. The selfie-snapper is good enough for Skype video conversations, but we’d recommend sticking to your phone camera for shareable vanity shots.

Should I buy the Lenovo Yoga Tablet 2?

For sheer value for money, yes. The Lenovo Yoga Tablet 2 isn’t exactly a budget tablet, but it’s well capable of competing with models that are a great deal more expensive. If you can’t afford to shell out over £300, it’s an excellent choice.

Key features, including battery life and performance, are up there with the best, while speaker quality is also very impressive. Furthermore, its unique design and iconic stand give it an edge over anything currently out there. The display isn’t sharp enough to qualify as stunning, though it’s still a high quality panel and is a much more manageable size than the Yoga Tablet 2 Pro’s 13.3-inch number. 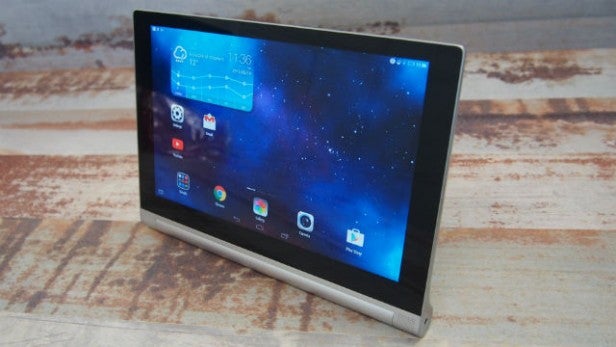 The Yoga’s weakest feature is undoubtedly the user interface. Lenovo’s Android skin is slightly bizarre in its functionality, and definitely weakens the Android experience. However, it’s not cripplingly bad. You’ll be able to find everything you need, but you might have to look in odd places.

An excellent tablet with an ingenious hinge. It won’t blow a hole in your salary either.