Simply put, the 1-megapixel 720p HD CMOS camera on the 900 isn’t great. Again, I’m used to a MacBook, which – although not in possession of the best camera on the market – puts the 900 to shame in this department.

The 900 camera reproduced blurry and washed-out images. Although they’re fine for casual Skype sessions and the like, it’s simply another area in which it feels as though  Lenovo has missed the mark for the price it’s asking.

Lenovo claims that the four-cell Lithium-ion battery inside the Yoga 900 will last up to nine hours – and in our tests it fared well. In fact, the new battery is one of the main improvements over the Yoga 3 Pro, which had mediocre battery life at best.

On the video playback test, with the screen brightness set at 50%, the power went from 100% to zero in just over seven hours. This equates to an average loss of 13% battery each hour. This puts it in the range of the non-Skylake Dell XPS 13, whose figure was between 14-18% per hour inn the same test. When leaving the 900 on and using it every now and then for web browsing and word processing, the battery lost on average around 7% per hour.

In terms of charge times, the Yoga 900 took around two and a half hours to go from zero to 100%. Not the worst on the market, but my 2013 MacBook is slightly quicker. 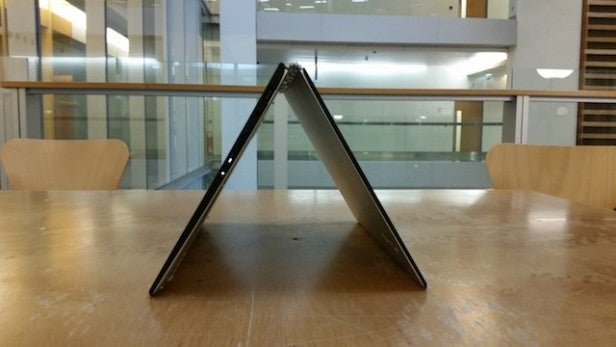 The Yoga 900 comes with JBL stereo speakers with Dolby DS 1.0 and Home Theater Certification. Basically, it’s a decent setup that will cope admirably with what you’d expect of laptop audio.

The sound was distinctly full and fairly bass-heavy, without becoming muddy. The 900 also goes plenty loud enough for average use, and doesn’t suffer from any distortion at higher volumes.

Should I buy the Lenovo Yoga 900

With the Yoga 900, Lenovo has certainly improved upon the Yoga 3 Pro, continuing its commitment to innovative design and adding several performance upgrades.

However, when you consider all the small issues – from screen flickering to flexible casing – it becomes very difficult to shake the feeling that this device could have been significantly better than it is.

Your decision over whether or not to buy the Yoga 900 will boil down to what you’re looking for and how much you have to spend.

If the price isn’t an issue, and you’re familiar with the Mac OS, then buy a MacBook instead. The 900 is almost as good as the MacBook in every way – from it’s screen to it’s build quality. It just feels like it’s slightly below the standard you’d expect at this price.

Yes, the 900’s specs are higher than what you’ll find in a MacBook or Surface Book, but unless you’re a power user, you’ll hardly notice the difference.

That said, if you’re not an Apple fan and are looking for a hybrid Ultrabook, the Yoga 900 has plenty of positive points. It’s well designed, works well in both tablet and laptop form, and has managed to improve performance without compromising on battery life.

Undoubtedly the best Yoga yet, this is a well-designed Ultrabook offering decent performance – but it’s slightly too rough around the edges to justify the high price.