What is Intel Skylake?

It’s over two years since Intel last released a true update to its mainstream desktop CPU line, in the shape of its Haswell range. Due to a combination of changed priorities, lack of competition from AMD and issues with its new 14nm production process, last year’s Broadwell update never really made it to the conventional desktop arena, with it instead being prioritised for laptop and tablet form factors, such as used in the Dell XPS 13 (2015).

Instead we got a refresh of Haswell that saw clock speeds tweaked across the board. There was also the introduction of the Devil’s Canyon range that included the Core i5-4690K and Core i7-4790K. However, these were again basically just a clock speed push. So, no new features, no power saving and overall a modest improvement in performance.

A few desktop Broadwell chips were announced but few are available to buy and in fact some shops have simply not even bothered to stock them, instead waiting for the arrival of the company’s brand new line: Skylake.

Sporting a new chip design, as well as a smaller manufacturing process, compared to Haswell, the new chips should bring significant performance and power saving improvements (depending on configuration). Also, combined with their new motherboard chipsets, they’ll support more features right out the box, such as Thunderbolt 3 and DDR4 memory.

While the majority of the Skylake lineup will arrive later in the year, today sees the launch of the top of the line Core i7-6700K and Core i5-6600K, which are aimed at enthusiast users that are particularly interested in overclocking. Let’s see if they’ve been worth the wait. 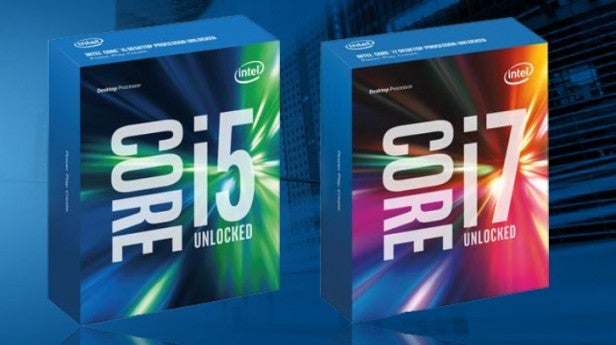 As with Haswell and Broadwell before, Skylake denotes an overall chip design that will be used in various forms to create a multitude of different processors covering everything from high-end desktop PCs to thin and light laptops.

The full range will be extensive, but can essentially be broken down into four main families. Skylake-S are the desktop CPUs while Skylake-Y, U and H are all for mobile or embedded applications.

The Core i7-6700K and Core i5-6600K fall into the Skylake-S category, but are distinguished by a couple of key features. The K denotes that these chips have unlocked multipliers, which means they are far more open to being overclocked. They also lack the L4 cache of some of the lower chips, as the integrated graphics is less of a focus, with the assumption being that most users of these processors will have discrete graphics cards.

Otherwise, the core improvements in Skylake benefit the whole range, and with this launch the improvements should be even greater than we’d normally expect.

The new design brings performance and power saving innovations along with new features, while the smaller manufacturing process tends to reduce power consumption and increase potential clock speed. Plus it allows Intel to fit more chips on each wafer of silicon, making them cheaper to produce.

This has gone on for years and is why we’ve tended to see processor ranges named in pairs, such as Sandy Bridge and Ivy Bridge, Haswell and Broadwell and now Skylake followed by Kaby Lake. Each pair indicating the same overall design, with the second name in each pair being the smaller version.

That brings us to Skylake and the fact that Broadwell essentially never arrived for the desktop. As such you’re getting the die-shrink of Broadwell and the new design of Skylake, which should add up to a decent leap in performance/power saving over Haswell.

Specifically, where Haswell was built using a 20nm process, Broadwell and Skylake use a 14nm process. We’ve seen signs of the benefits of this 14nm process in Broadwell laptop processors, such as in the new line of Apple MacBooks, as well as the new Core M chip design, which has brought a new level of performance to the ultra low-power laptop market, as seen in the Asus Zenbook UX305.

Aside from its new manufacturing process, Intel has kept fairly quiet on exactly what’s under the hood of Skylake, with further details about the new design expected to be revealed at the Intel Developer Forum (IDF) from Monday 17th August onwards.

As such this review really boils to the two announced chips and what they can do.

While the two new K-series processors we’re looking at today are the flagships of the Skylake range, it’s worth noting that they aren’t the flagship processors in Intel’s overall range.

Even putting aside the company’s Xeon server chips, there are also the Haswell-E and Ivy Bridge-E chips to consider. Essentially consumer versions of Xeon chips, these are based on older overall designs but pack in more physical processing cores.

Whereas the Skylake range tops out at four physical cores (some with hyperthreading where it appears to the system like it has 8 cores), the Haswell–E range has six and 8 core variants that also have hyperthreading, so they can deal with 12 and 16 threads respectively. That makes them still the fastest multi-threaded workload processors for the foreseeable future.

However, they’re priced accordingly and are also supported by more expensive motherboards. If you’re looking to make a video encoding rig or run multiple graphics cards then they’re still the best bet, but for more general purpose use with a single graphics card, Skylake is the way to go. 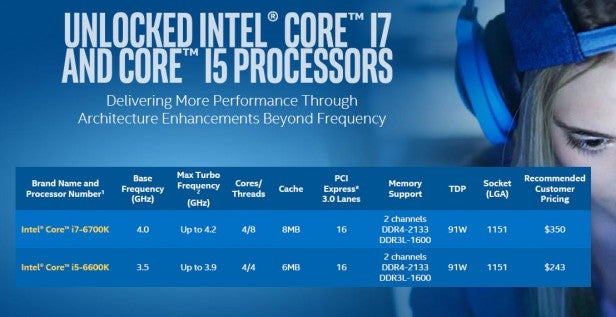 The Core i7-6700K, then, is a four-core chip with hyperthreading that runs at 4.0GHz, with a boost clock of up to 4.2Ghz – that’s where the chip will self-overclock one or more cores on demand and where possible, without exceeding the overall thermal design of the chip. It also packs in 8MB of L3 cache and supports up to 16 PCI express 3.0 lanes and has two memory channels with a maximum rated clock speed of DDR4-2133 and DDR3-1600.

Meanwhile, the Core i5-6600K drops the hyperthreading and starts off at 3.5GHz with a boost of up to 3.9GHz. It also drops to 6MB of L3 cache but is otherwise the same.