The Miix 510 is Lenovo’s latest 2-in-1 Windows tablet. Equipped with a keyboard cover, seventh-gen Intel CPU and improved connectivity, the Miix 510 is a solid convertible.

However, issues with its trackpad and a pretty short battery life mean that this latest Miix does little to differentiate itself from established rivals such as the Acer Switch 5, Asus Transformer 3 Pro and stellar 12-inch Samsung Galaxy Book.

Visually, the 2017 Miix looks identical to its 2016 predecessor. It’s a slightly boxy grey tablet with an unassuming black attachable keyboard cover. The only design flourish is an atypically flashy Yoga-like hinge mechanism on its rear, which connects the kickstand to the tablet.

A year ago, I’d have been content with the Miix’s unassuming design, but in 2017 it feels a little stale, especially when compared to super-swish convertibles such as the Samsung Galaxy Book. Compared to the Galaxy, the Mixx’s 15.9mm thickness (with keyboard attached) and chunky screen bezel looks a little retro – and not in a good way. Nevertheless, the device remains highly portable and ticks all the right boxes when it comes to connectivity. Along the tablet’s sides you’ll find single USB 3.0, USB-C, microSD ports and an audio jack. The selection is likely to meet most people’s connectivity needs. My only minor quibble is that the device still uses a proprietary charger, which is annoying, especially since competing devices such as the Asus Transformer 3 Pro have made the jump to USB-C.  On board, you’ll find 802.11ac Wi-Fi and Bluetooth 4.1.

It weighs in at 870g for the tablet alone, and 1.2kg with the keyboard dock in tow, which is exceptionally portable.

The 5-megapixel rear camera isn’t something you’ll want to rely on for holiday photos, but it’s more than capable for video streaming. It’s a similar story with the 2-megapixel front camera, which will be adequate for your video calls.

The Miix doesn’t have the luxurious feel of the Surface Pro, but build quality is excellent nonetheless. Using the Miix as my work and personal laptop for a week,  the metal frame also proved suitably scratch-resistant and is more than robust enough to survive the standard wear and tear of travelling.

The Miix 510’s keyboard dock is about par for the course when compared with other rival models.

The chiclet keys feel identical to last year’s model, which isn’t a bad thing. The 1.5mm key travel is good enough and the keys prove tactile and responsive for general typing. The fact they’re backlit and that the arrow keys are full-sized is another bonus. However, as is the case with all the convertibles I test, the use of a stand rather than mechanical hinge as included on the Surface Book makes typing on your lap for prolonged periods a little uncomfortable and a bit unstable.

The trackpad is a bit of a mixed bag. It’s smaller than competing convertibles in the same size bracket and doesn’t feature physically separate left and right buttons. This may sound like a minor gripe, but it makes basic tasks such as document editing far more awkward as the trackpad’s small dimensions make it all to easy to mis-press and send the cursor flying.

Windows 10 multi-touch gestures generally work fine, but aren’t quite as responsive as I’d like. At times they can take a fraction of second to register, which makes it feel like you’re dragging web pages and documents up and down, rather than scrolling. 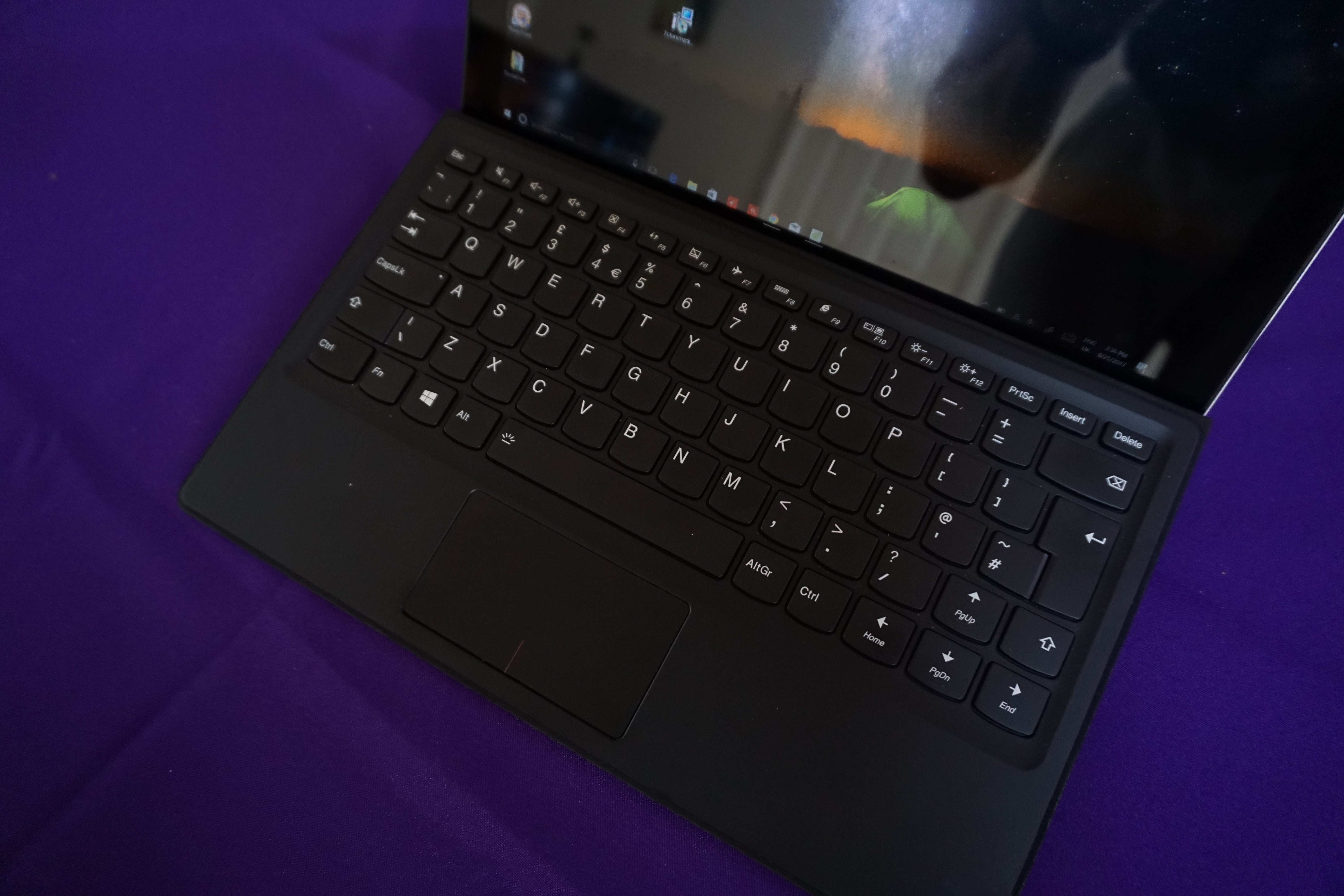 The Miix 510 has a decent 12.2-inch screen. Unlike the Galaxy Book 12, which features AMOLED tech, the Miix uses a near-Full HD resolution (1920 x 1200 pixels) with an IPS panel. In 2017, this is a little disappointing, especially when competing devices such as the Acer Switch 5 now include higher-resolution displays.

In real-world use the Full HD resolution isn’t much of an issue, however. On a screen of this size, this resolution is more than sharp enough; most people will struggle to spot individual pixels. During my time with the Miix, I never encountered any problems with the screen for general tasks. Viewing angles are decent and the high contrast and 300-nits-plus brightness is good enough for working outside in the shade.

The only issues I noticed popped up whilst trying to do creative work on the Miix. The exceptionally cool 9230K colour temperature is a marked departure from the standard 6500k ideal and left everything looking cold. The Acer Switch 5 features a noticeably better and more realistic-looking 7216K temperature, by comparison.

The 86.6% sRGB colour gamut coverage is again good for general use, but the 63.4% Adobe RGB and 68.3% DCI-P3 figures wont’ be enough for creative professionals who need exact colours. Being fair to Lenovo, the figures are pretty standard for convertibles in this price range, but it’s still an issue to be aware of if you’re a photographer or digital artist who works in physical media such as print.

Lenovo is offering a number of upgrades on the Miix, which let you swap the Core i5 for an i7 and bump up the SSD to 1TB of storage. Sadly, at the time of writing Lenovo could only confirm the pricing of the model I’m testing.

The PCMark 2580 conventional and 37,180 3DMark: Ice Storm extreme scores are both par for the course for a convertible with these specs, as are the SSD’s 1295 MB/sec read and 310.2 MB/sec write speeds in CrystalDiskMark. 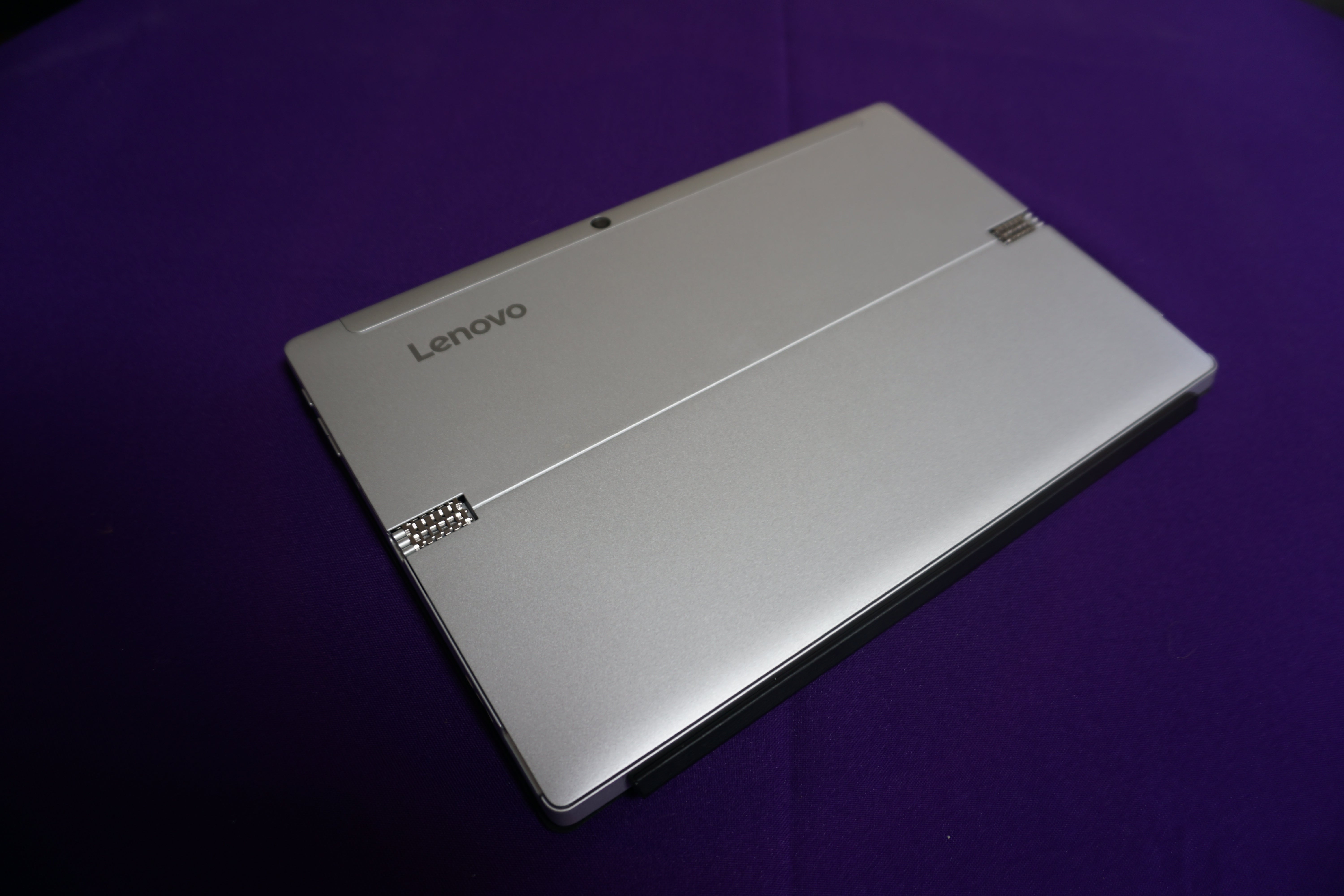 The Miix’s real world performance matched the synthetic benchmark scores. For everyday web browsing, word processing and light creative work, the Miix is more than powerful enough – although anything but very basic gaming, such as Minecraft, is beyond it.

The Lenovo stylus performed admirably. Based on technology from the stylus wizards over at Wacom, the pen is a great option for student buyers who want a means to quickly scribble notes on the Miix. I didn’t experience any latency while taking notes during an interview, and found the pen was wonderfully accurate and responsive.

The only slight annoyance is that, like all convertible styluses, pressure sensitivity doesn’t work with freeware creative apps – such as Krita – out of the box. To get it working, you’ll need to download the correct drivers from Wacom and Microsoft; Trusted has found in the fast that Surface Pro 4 WinTab drivers generally do the business when it come to freeware pressure-sensitivity.

Lenovo claims the Miix 510’s 39Whr battery will last 7.5 hours of mixed use from a single charge. When you consider that most manufacturer claims are always wildly over-optimistic, you can see where this is going.

Running Trusted Reviews‘ standard battery test, which involves synthetically looping 10 minutes of web browsing and five minutes of video playback with the screen brightness set to 150nits in Powermark, the Miix lasted an average of five hours. This is fine for its class, but absolutely not good enough for a full eight-hour day. I, for one, was able to get five hours at absolute most on a normal work day that involved video calls, web browsing, email, Spotify and Netflix streaming. 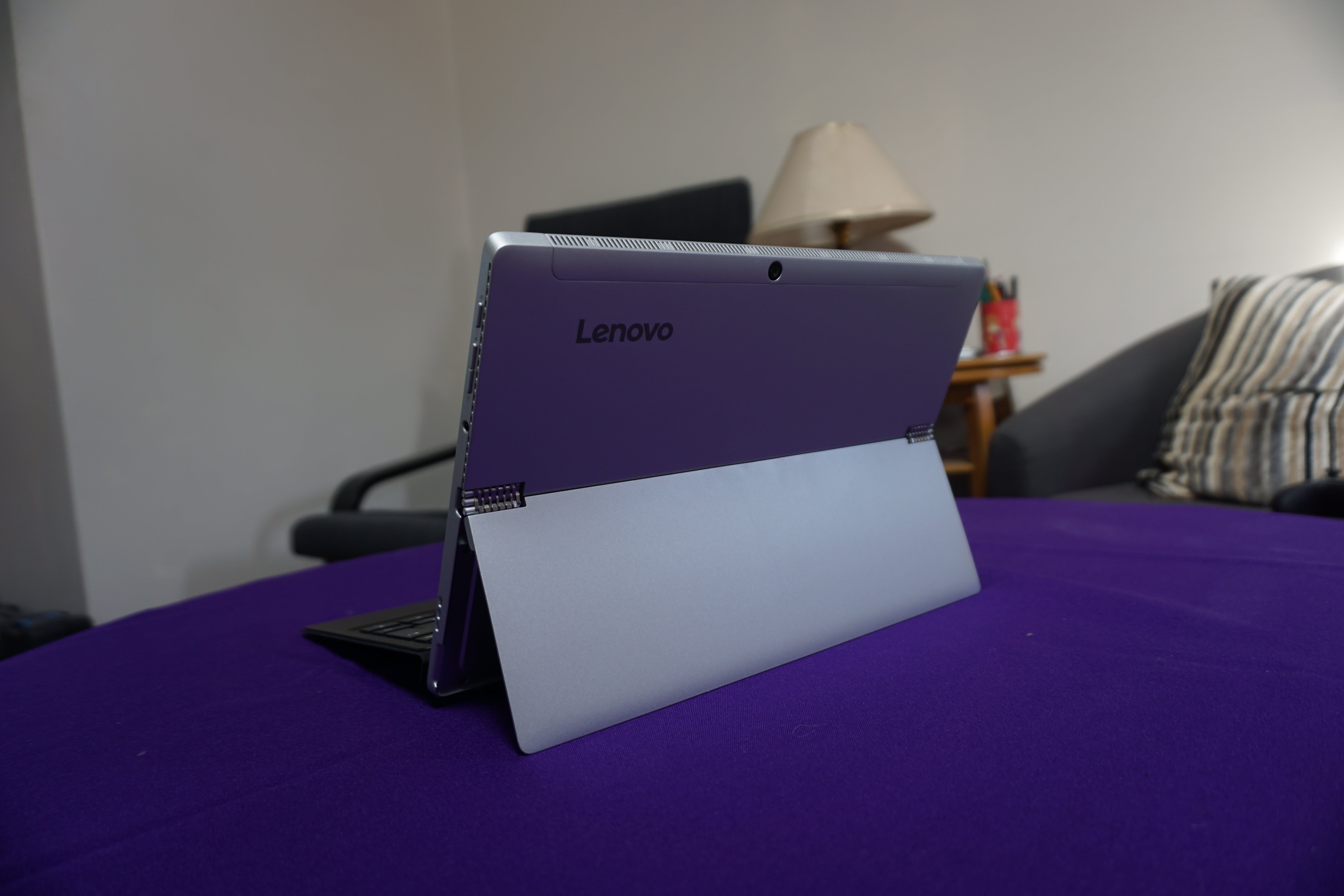 If you’re on the market for a workhorse convertible that covers the basics then the Miix 510 isn’t a bad choice, but it’s far from the complete package. So-so battery life and an inconsistent touchpad rather limit its appeal, and up against its rivals it’s very plain indeed. This machine is most attractive in its lower-price alternative specs, which should start at around £600. For £900, the flaws outlined above are a bit too much to bear.

The competition, too, is quite stellar. It doesn’t have the sleek design and ultra-portable build of the Samsung Galaxy Book 10.6, and neither is it any cheaper than competing devices such as the Acer Switch 5 – both of which are equally valid choices. You could also spend more on the class-leading Microsoft Surface Pro, but with all its accessories in tow you’re looking at a much higher spend.

A solid convertible, but it doesn’t tick every box.