What is the Surface Pro?

You wouldn’t know it from the name, but the Surface Pro is actually the fifth convertible tablet-come-laptop from Microsoft. When did companies decide that numbers were no longer cool?

Keeping in line with Microsoft’s current vibe, the Surface Pro is a pretty, by-the-numbers device, which sees an upgrade to the tablet’s hardware and little else.

But this isn’t necessarily a bad thing. The combination of stylus, tablet and Type Cover is as appealing as ever, and remains an enticing option for students, creative professionals and business types looking for an all-in-one device for work and play.

Take note though, Microsoft has now released the Surface Go, which has the same ultra-portability and sleek design but is built for non-creatives. With watered-down processing power the Surface Go is considerably cheaper than the Surface Pro, and is well worth considering whether you’re a student, office worker or casual web browser.

If you put the Surface Pro and Surface Pro 4 in a lineup, even the most discerning of eyes would initially struggle to determine which is which. Both sport the same grey metal finish and are pretty much identical in size, measuring in at 292 x 201 x 8.4mm.

The Surface Pen stylus, which magnetically clips to the tablet’s side, and the Type Cover attachable keyboard also make a return. Although to my irritation both are still sold as optional extras, with the Surface Pen costing £60 and the keyboard £124.99 – and buying the Surface without one or the other seriously inhibits its usefulness. Asus manages it with the Transformer Pro 3, just sayin’.

Connectivity is also much the same, since both Surface models come loaded with a single USB 3.0 port, a mini-DisplayPort, SurfaceConnect magnetic charging (and optional dock) port and a microSD card slot. Personally, I’d have liked to see Microsoft add an extra USB, or even USB-C connector to the new Surface, but this is a small quibble considering the device’s compact dimensions.

It’s only up close that a few subtle changes will become apparent. For starters, Microsoft has managed to make the Surface Pro a little lighter. The exact weight will vary depending on the configuration you go for, but the top-spec i7 model weighs in at 784g, making it a full 2g lighter than the flagship Surface Pro 4. Small gains.

The only useful change I noticed related to the device’s kickstand. Microsoft has tweaked the kickstand hinge to enable the Surface Pro to lie almost flat when set in Studio mode, making the device a little more comfortable to draw on than the Pro 4. 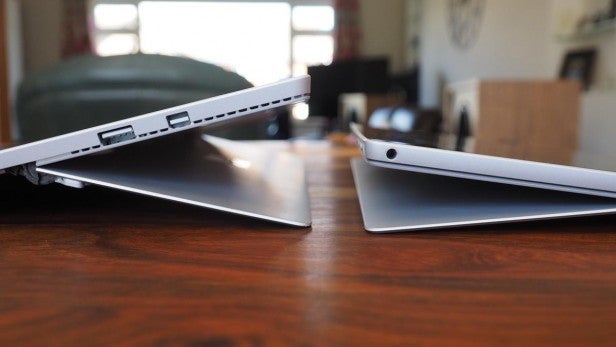 Microsoft claims that the magnets used for connecting the Type Cover are stronger, although during my time with the tablet I didn’t notice any real difference.

The use of chiclet keys means the Type Cover isn’t as comfortable to type on as a regular laptop, but as convertible covers go, it’s pretty good.

The keys are backlit, which is great when typing in the dark, and offer enough travel to feel responsive. The layout is a little cramped, and I’d have liked to see full-sized direction keys, but that’s an issue on all tablet keyboard covers I’ve tested.

The touchpad is also a cut above those on most convertibles. Not surprisingly, the touchpad is Microsoft Precision-certified, which means multi-touch gestures work a treat. It’s also larger than on most competing tablet covers, making it one of a select few I could comfortably use for a whole working day.

My only complaint is that the left- and right-click buttons are the bottom corners of the touchpad, rather than being separate. This may sound a minor issue, but the lack of such buttons makes it a little easier than I’d like to mis-press and send the cursor flying, which is very annoying when you’re in the middle of editing a document. 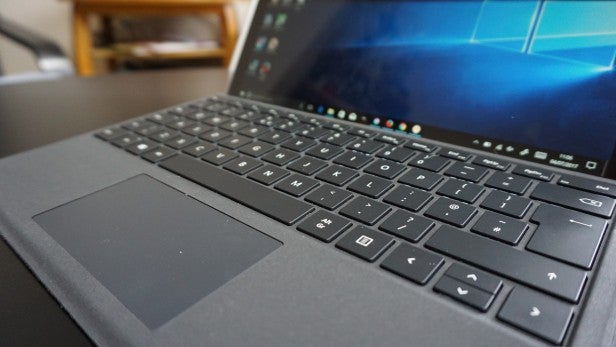 For me, the Surface Pro line’s screens have always been a bit of a mixed bag. Offering razor-sharp resolutions and nice colour temperatures, the displays have been great for general consumers. But poor Adobe RGB and DCI-P3 colour gamut coverage has hampered their usefulness for creative professionals working on high-end projects for the physical world, such as print.

Sadly, poor coverage remains an issue on the Surface Pro’s 12.3-inch ‘Pixel Sense’ screen. Tested using an X-Rite colorimeter, the screen covered a solid 92.4% of the bog-standard sRGB spectrum, but slightly disappointing 64.3% of the Adobe RGB and 66.7% DCI-P3. 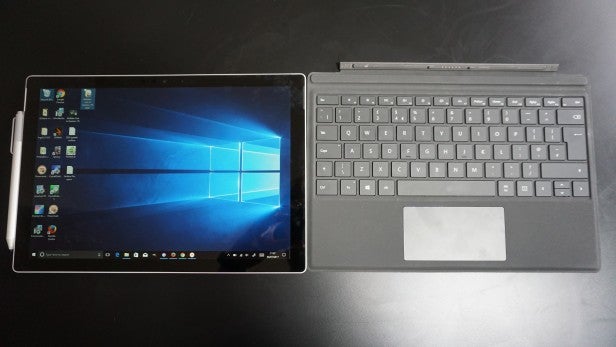 These figures aren’t terrible by regular laptop standards, but they put the Surface behind proper creative tools, such as the Wacom Mobile Studio Pro, which offers 89.3% coverage of the Adobe RGB and 80.8% coverage of the DCI-P3 colour gamuts.

Outside of this the screen is excellent, however. The 2736 x 1824 (267ppi) resolution ensures text and icons are uniformly sharp. There isn’t any significant backlight bleed and the 6753K colour temperature I recorded is suitably close to the 6500K ideal to ensure colours don’t look too cool or too warm.

The 0.26cd/m2 black level and 324.70 cd/m2 white level give it a solid 1243:1 contrast ratio. This may not meet HDR standards, which are on offer from some of Samsung’s incoming hybrids, but it’s more than good enough for watching movies and general use.

My only issue with the screen is that Microsoft has loaded the Surface Pro with a dire ‘Enhanced’ display option. The feature is meant to make the screen look punchier, but in reality it distorts colours, making reds look pink and yellows slightly orange. The white level also suffers, taking on a dirty yellow hue. Fortunately, it’s easy enough to avoid and can be turned off in the display settings menu.