What is the Samsung Galaxy Book 10.6?

The 10.6-inch Galaxy Book is Samsung’s most affordable Windows 2-in-1 laptop to date. With a compact design, bundled keyboard and stylus, it’s the complete package for anyone who wants to take notes on the fly and doesn’t want a full-size laptop weighing them down.

The tablet portion of the Galaxy Book isn’t much to look at. There’s a 10.6-inch screen front-and centre surrounded by a fairly chunky black bezel. The machine is housed in a silver metallic chassis that’s uninterrupted save for the customary Intel Core sticker.

It weighs in at 644g, which is around 200g heavier than the 10.5-inch iPad Pro. It’s not light or small enough to hold in one hand for an extended period of time, but it’s easy to wield with both. The ports selection is exceptionally limited; you get a single USB-C connector that’s used for charging and a microSD card tray for expanding the small 64GB of storage by up to 256GB. There’s also a 3.5mm headset jack. On the top there’s the standby/power button and volume rocker, and that’s your lot. But that’s not the end of the story, because unlike the iPad Pro and Microsoft Surface, the Galaxy Book 10.6 ships not only with a folio keyboard cover, but a stylus as well. With all that in tow, it weighs exactly a kilogram, which is still ultra-light.

The keyboard clips on using magnetic prongs, and fits in very securely. From there, you can attach a loop that keeps the stylus in place comfortably. Both the folio and stylus feel secure and I never felt worried that I’d delve into my bag one day and not be able to find the stylus.

The folio doubles as a stand for the tablet portion, turning the Galaxy Book 10.6 into a compelling laptop replacement. The stand is a bit fiddly to begin with but, usefully, Samsung has imprinted diagrams of how to set up the stand onto the back of the keyboard cover, so it’s always in view when you need it. Clever. 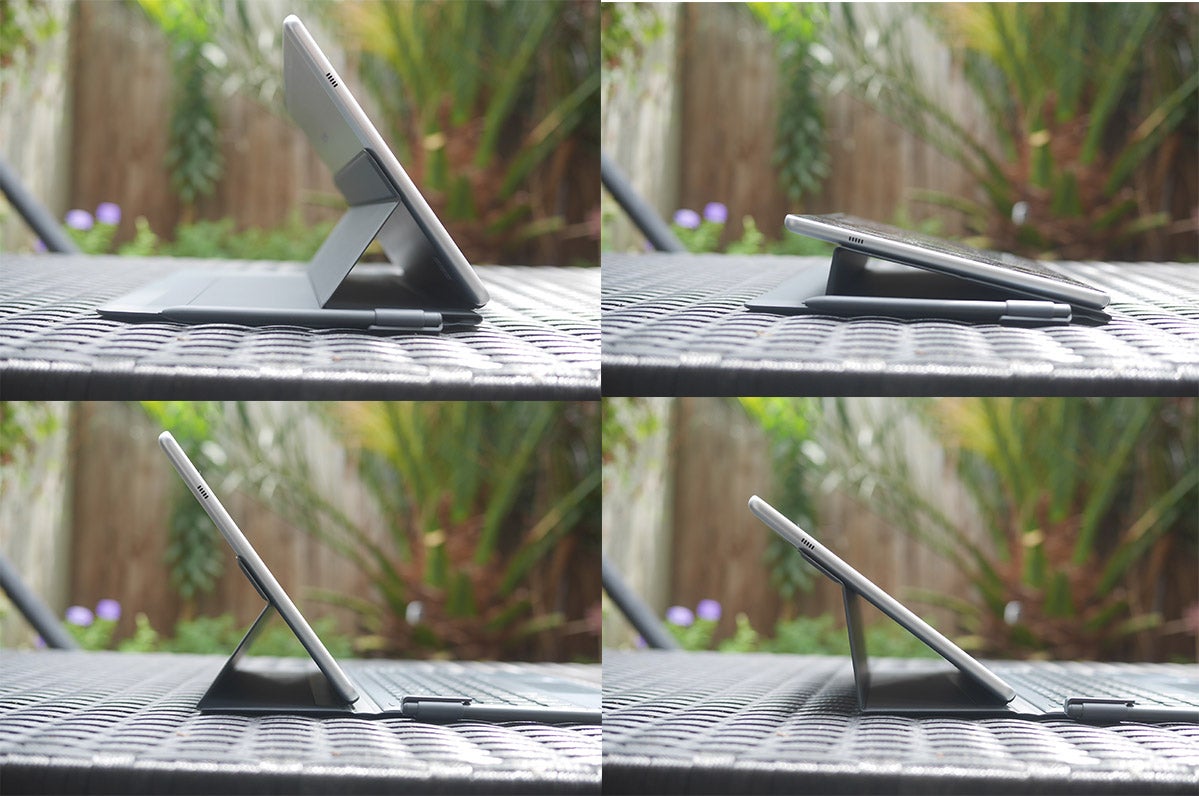 The stand holds the tablet up at three angles, which will cover most situations. The most laid-back mode dispenses with the keyboard, leaving it lying on the desk. This is good for when you fancy taking notes on a slightly pitched surface. For use as a laptop, there’s a position I found suitable for working with the tablet on my lap, and the most upright version was great for working at a desk. I would have liked one more even more bolt-upright option for when typing in bed; neither of the other two options really cut the mustard with legs outstretched.

One curious quirk to the Galaxy Book 10.6 is the length of the supplied USB charging cable. It’s only 1.5m long, which is enough for a phone but nowhere near long enough for a laptop. In any coffee shop or airport situation where your nearest plug isn’t right next to where you’re sitting, this will be an annoyance. It was annoying enough for me at home when I wanted to work on the sofa, let alone out in the wild.

Internally, there’s only 802.11n Wi-Fi, so you miss out on the higher speeds and better reliability of 802.11ac Wi-Fi that ships with most mid-range laptops these days.

Because the Galaxy Book’s keyboard lies flat, I expected the typing experience to be a bit uncomfortable. But, you know what? It’s perfectly fine. You certainly don’t get quite the reach you can with a keyboard with a bit of pitch, but because the board is so small to begin with, it’s not hard to reach to the key you want. 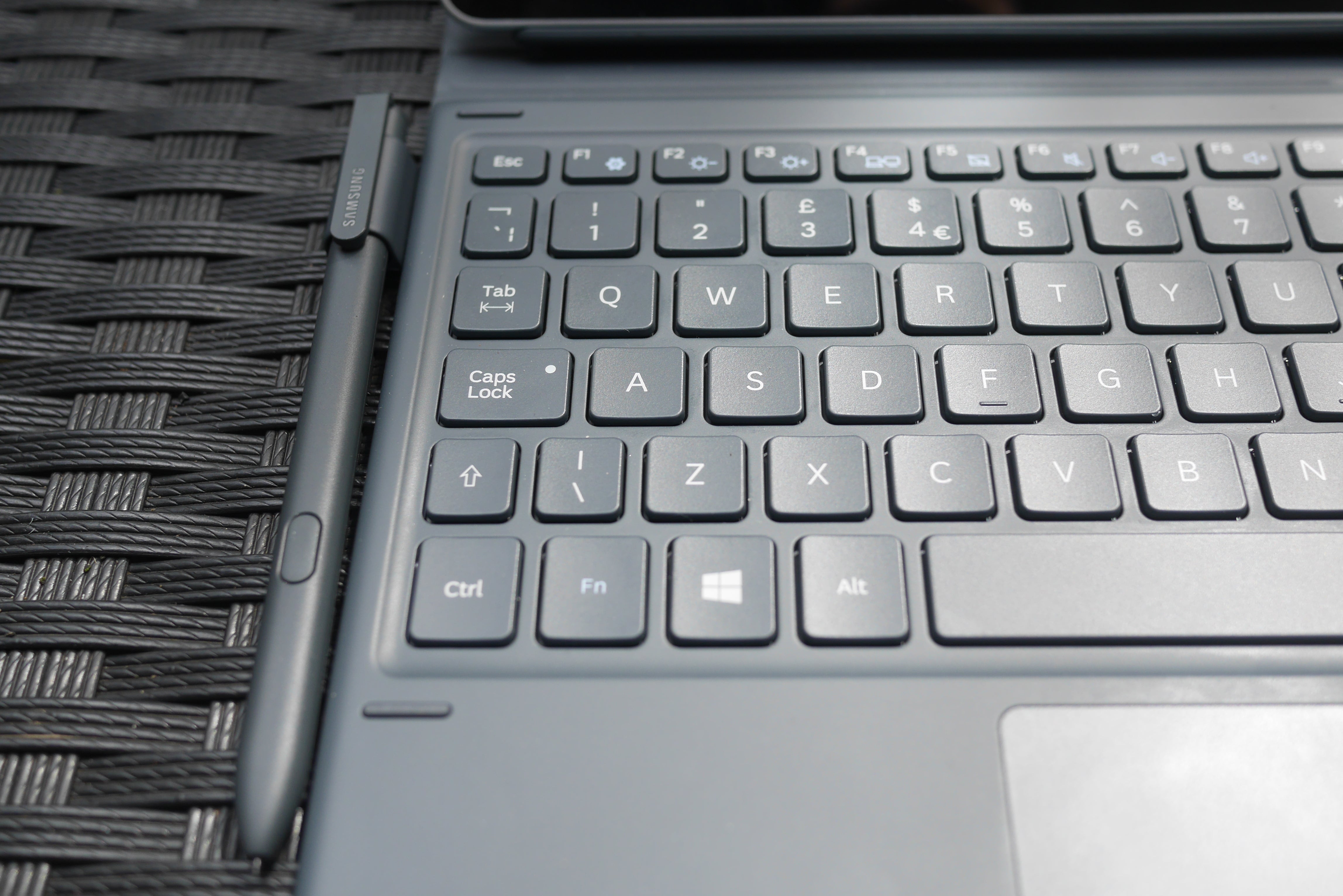 The actual keypress experience is fine, and there are no major omissions aside from the comically small, half-width left-shift key. There’s also no backlighting, but that’s rare on cheaper 2-in-1.s

With such limited space, the touchpad is quite small. It’s mostly fine aside from those occasions where you want to scroll through a long document or webpage at speed, at which point it becomes hard to fling your fingers across its surface without bumping into the edges. It supports all of Windows 10’s gestures including two- and three-fingered actions, and swiping is accurate enough. There’s also an embedded physical click for fans of tactile inputs.

The S-Pen stylus is excellent. It’s lightweight, doesn’t need a battery and clips neatly onto the side of the keyboard. Not only is it fast and responsive, it also works with Windows 10’s Ink software, meaning making notes using OneNote is quick and tactile. The pressure sensitivity and pleasant level of resistance makes it comfortable to use, too.

When the pen is a few centimetres from the screen and you tap its single button, instead of opening Windows’ own Ink menu, it opens Samsung’s interpretation. This includes a note app, a screen selection mode (that also lets you extract text from screenshots) and Show Window, that lets you project a portion of your screen onto a second monitor. 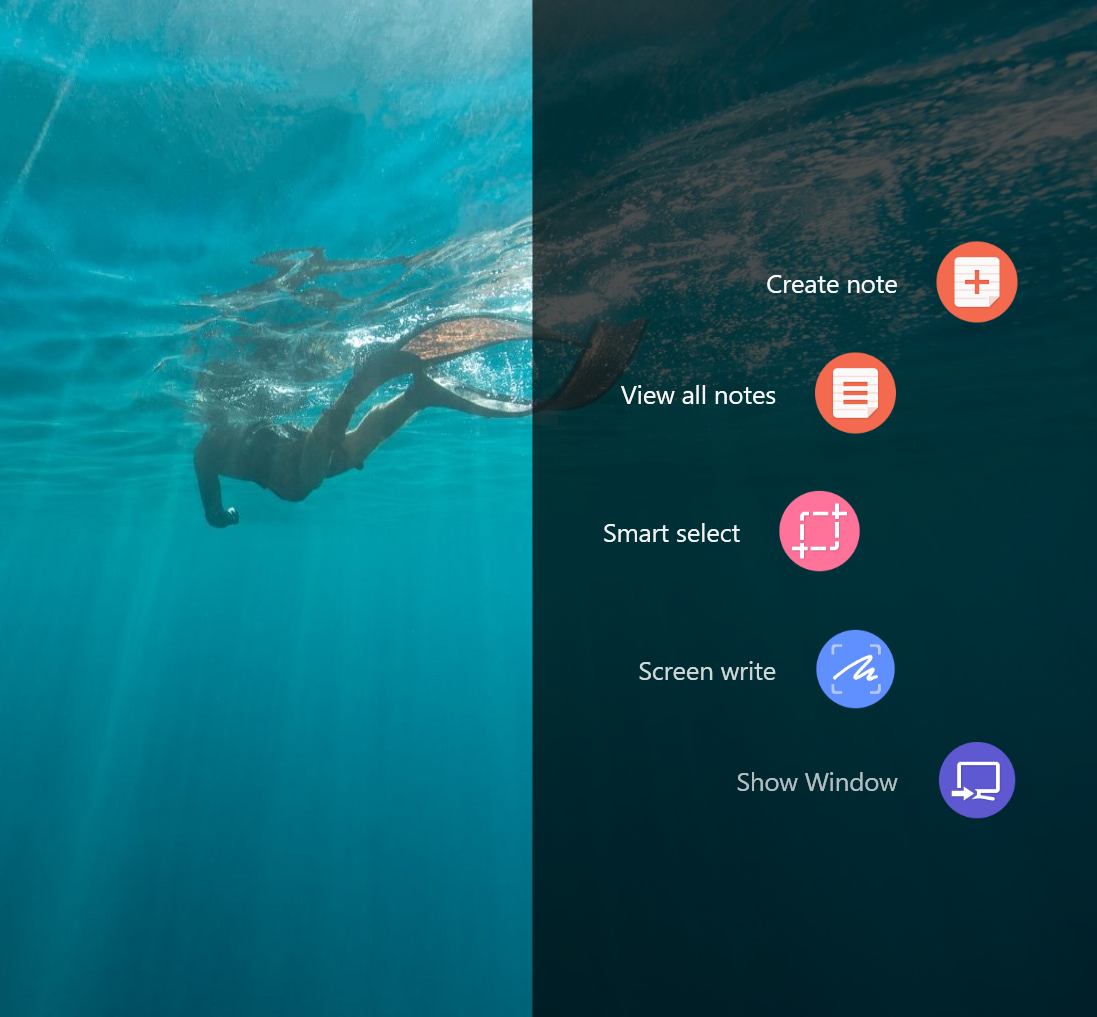 It’s a bit weird that Samsung is fighting with Windows Ink on what’s effectively the same set of tools, and I’d much prefer having the button pop open Windows Ink menus instead of the slower Samsung options.

The S Pen’s pressure sensitivity doesn’t work in all apps out of the box, so if you use freeware such as GIMP or Krita, you’ll need to download and install WinTab drivers. The easiest way to do this is to go to the Microsoft Surface downloads page and select the WinTab x64 driver. This enables pressure sensitivity in both programs, although in GIMP you’ll need to head into your input settings to activate it.

Drawing into Windows Ink apps is more or less instantaneous, but doing so in Krita and GIMP leads to a noticeable, fraction-of-a-second delay.

The Galaxy Book’s 10.6-inch screen packs a resolution of 1920 x 1280. That’s slightly squarer than your average Full HD screen, and its 3:2 aspect ratio comes in closer to a sheet of paper than a widescreen monitor. This makes it better when used in portrait when taking notes, but also means it’s a bit of a compromise when it comes to doing work in multiple windows. 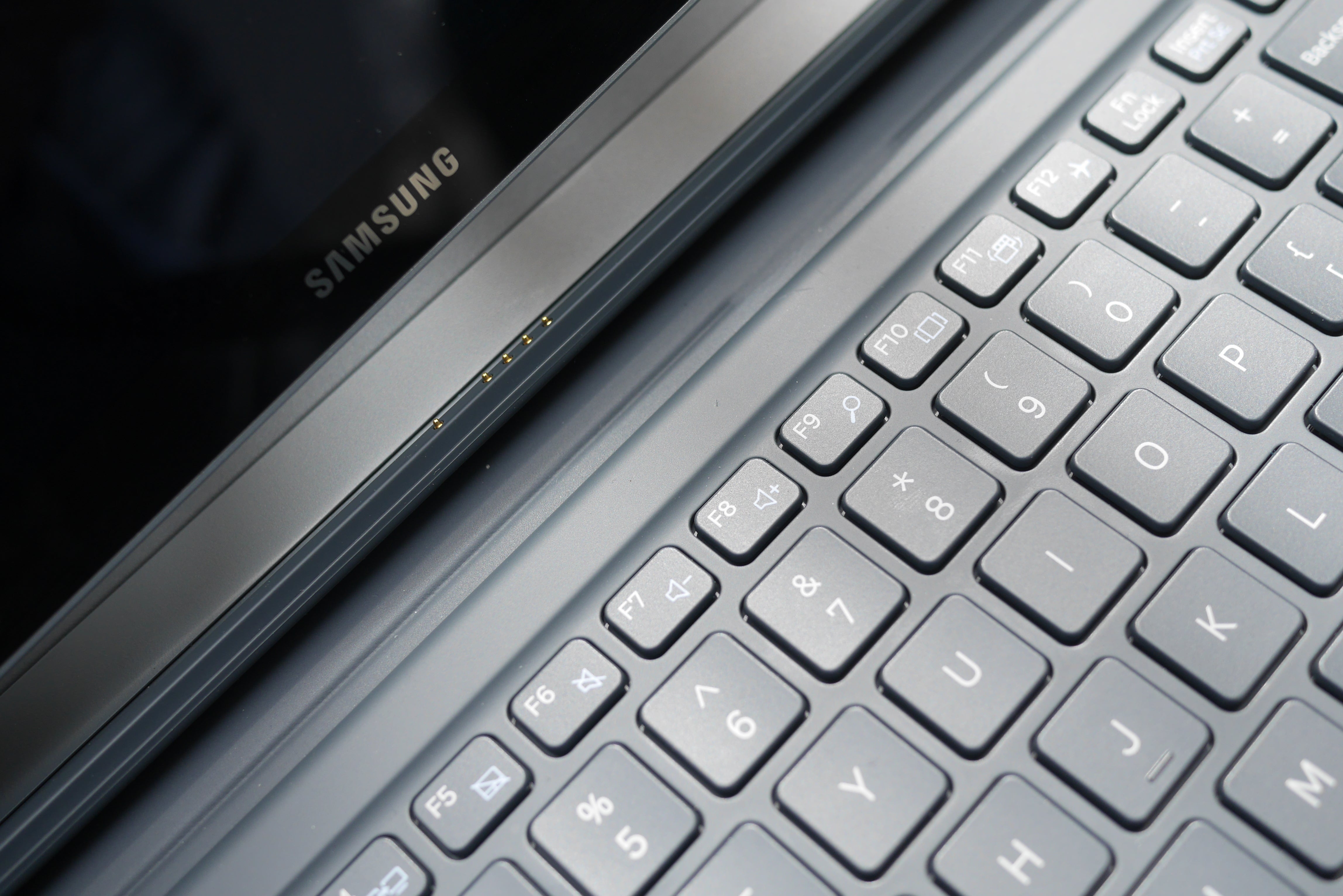 Realistically, you’ll only have room for one window open at a time, which is fine if you make prodigious use of window switching shortcuts.

The panel itself is of a decent quality, although unlike its more expensive 12-inch sibling it uses an IPS display instead of the superior AMOLED. Still, it does a decent enough job. Viewing angles are wide and brightness is excellent at over 400 nits. Clever automatic brightness settings mean the screen is never overly blinding or dark in any given condition.

Colour coverage is good, at just under 90% of the sRGB gamut. It’s not wide enough coverage to fully satisfy photography professionals, but that’s not who this tablet is pitched at.

The webcam is fine, if nothing special, but I have to take issue with the built-in microphone. It’s very keen on cutting out background noise but in doing so can occasionally cut out the user’s voice if they speak too quietly, even if they’re just 40cm away. I tried various options in the pre-installed Realtek software to improve things, but nothing could properly solve my quiet voice problem. If you are a naturally quiet speaker, you’ll have to speak up just a little, or pick the tablet up so it’s close to your face.

The speakers are nothing short of disappointing. They’re mounted on either side of the tablet in landscape mode, which is sensible because even if you pick it up with two hands, you’re unlikely to block the grilles. But that’s where the positives end: audio is sharp, tinny and doesn’t do justice to TV or music. The 3.5mm headset jack will be essential if you want to enjoy some tunes.

Used as our main laptop for the review period
Tested for at least a week
Used consistent benchmarks for fair comparisons with other laptops
Reviewed using respected industry benchmarks and real world use
Next
Performance, battery life and verdict Review