Comparisons with Overwatch might be inevitable, but Lawbreakers is a law unto itself. It’s a game with one eye on the current crop of character-focused, MOBA-influenced, eSports-ready competitive shooters, but the other on the run-and-gun pioneers of years ago.

It’s clearly designed with in-game purchases in mind, but that was never going to be pay-2-win or commerce-driven. And while it’s packed with modes, maps and a wealth of customisation options, it hasn’t lost its grip on the fundamentals of skill, speed and strategy. This all makes Lawbreakers a hard game to get a handle on, and it might be that many players won’t bother. Those who do will find it hugely rewarding, even if it’s not quite up there with the genre’s all-time greats.

For some, the Cliff Bleszinski credit will be a red herring. However, this isn’t the CliffyB you know from Gears of War, but the one who was co-lead design on Unreal Tournament. There’s a lot of UT’s DNA here in the speed and fluidity of action, the obsession with overblown weaponry, sci-fi setting, constant quipping and the desire to mix things up. At its best, Lawbreakers has the same mix of exuberance and adrenaline that made Unreal Tournament and its sequels so fantastic. 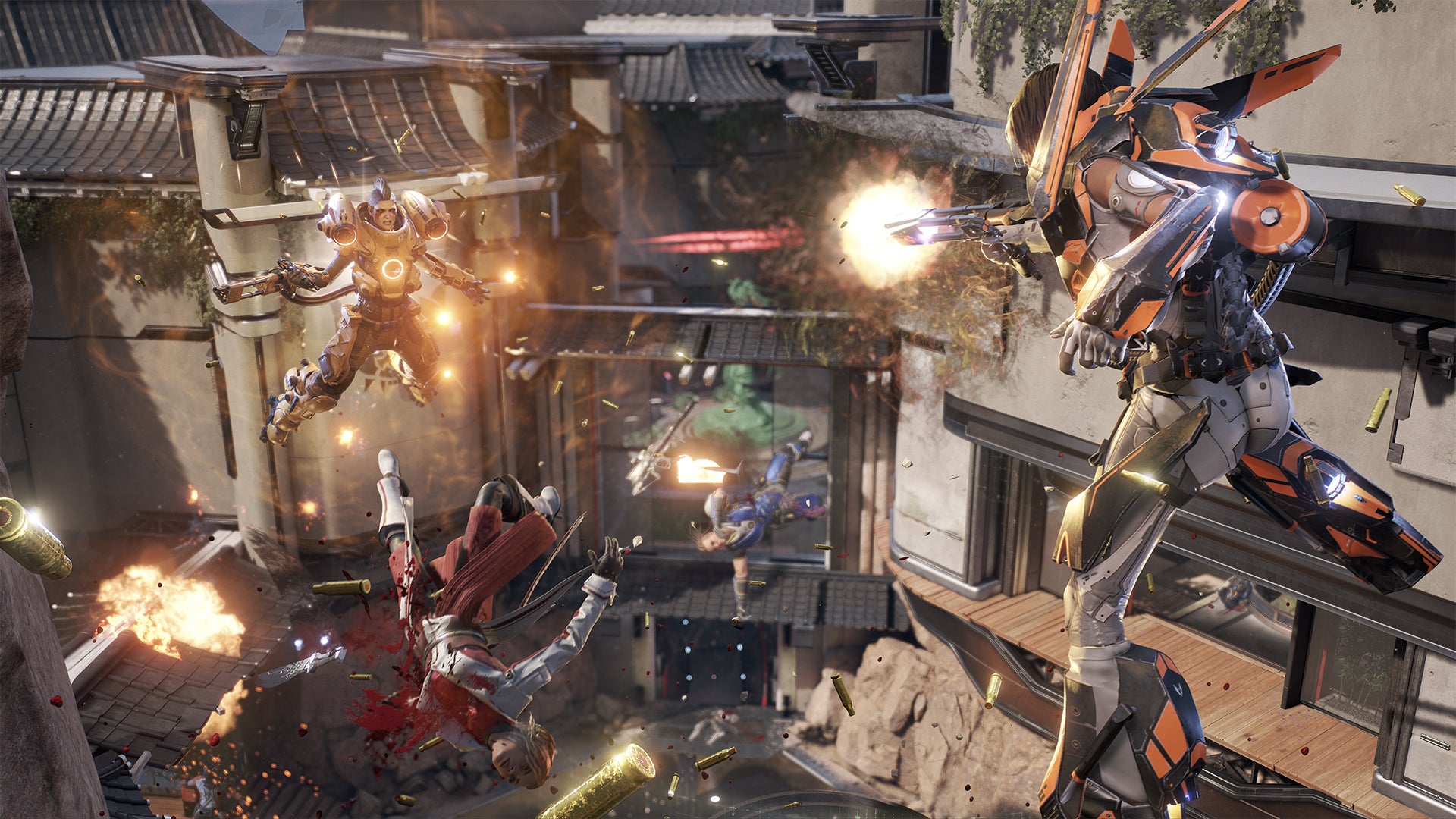 Sadly, it takes time for everything to click. In fact, it took a good few hours for me, partly because Lawbreakers throws a lot at you with minimal preamble. I still don’t really get the Law vs Breakers story or sci-fi setting, while video tutorials and a PC-only sandbox mode don’t do much to familiarise you with the fundamentals. That’s a problem, because not only do you have to get used to maps with a big anti-gravity zone in the central main arena – say hello to airbound skirmishes – but a roster of 18 different characters and nine different classes, each with its own weapons, special abilities, movement options and constitution. Getting to grips with all this in the midst of live matches is no picnic.

Everything happens incredibly fast. Every class has some high-speed movement mechanic, whether it’s simply a superhuman sprint, a long-range slide, a grappling hook or weird forward-phasing ability. Some, like the Battle Medics Tokki and Feng, float in the air, while others, like the Vanguards Maverick and Toska-9, work more like humanoid jet aircraft, thrusting through maps at ludicrous speeds. The Wraith and Assassin classes have evasive capabilities and charge moves that make them hard to pin down before they slice-and-dice you. In the hands of a skilled player they’re deadly, and unless you move fast and smart your guns won’t help one little bit.

Those weapons also take getting used to. Each character has a primary gun and a secondary attack, plus a hearty kick or melee weapon, and no two play quite the same. The Titan’s rocket launcher works pretty much as you’d expect, while the Vanguard’s chaingun starts off powerful but inaccurate then gains in focus as you keep dispensing lead. The Gunslinger, meanwhile, packs two pistols, one a small but surprisingly brutal spray-and-pray effort, the other a slow but potent single-shot blaster. 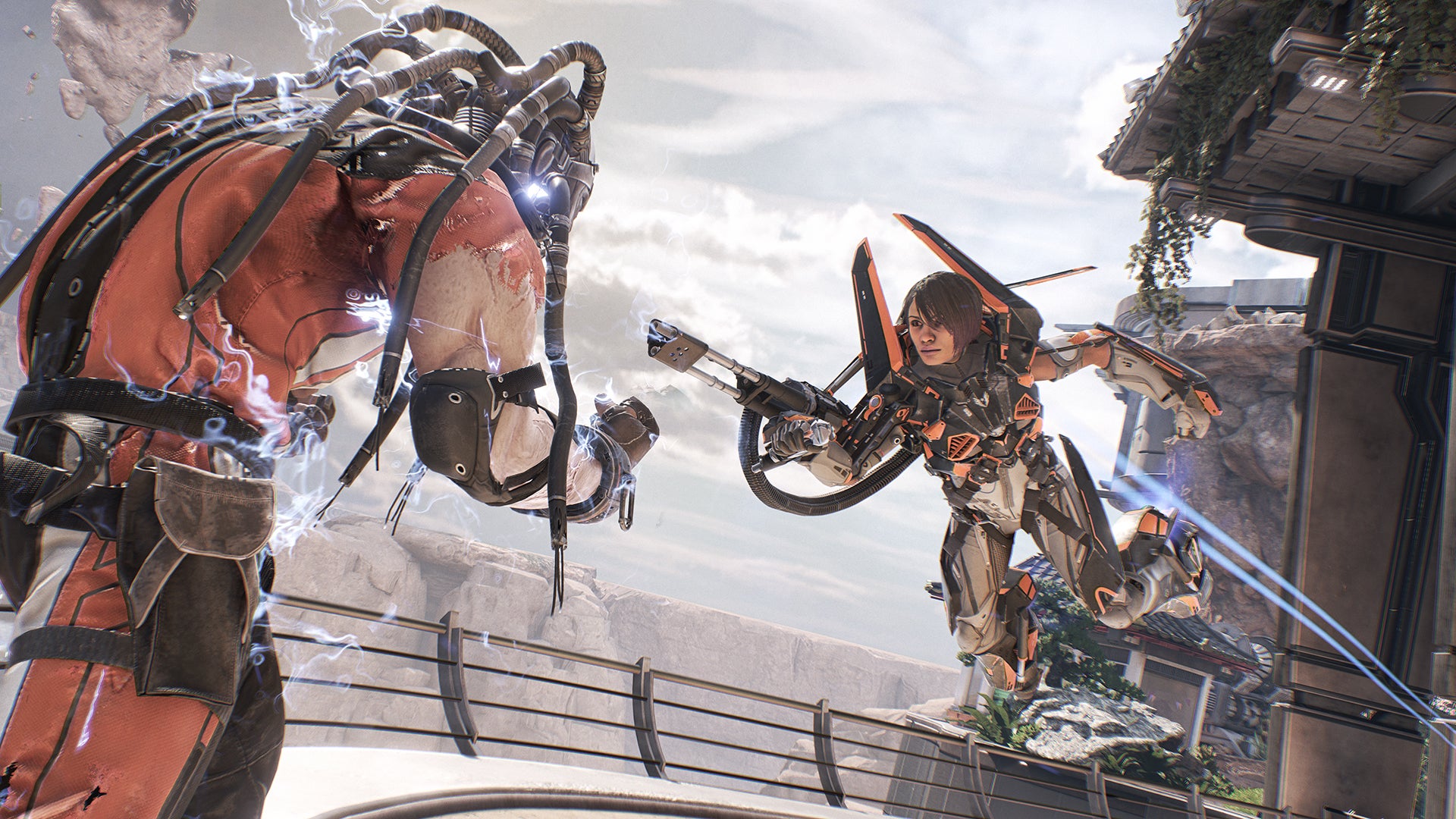 What’s more, each class has a different special on a longer cooldown, the shotgun-packing Juggernauts going into a heavy armour mode, the Titan getting tougher with a force-lightning power, the Harrier gaining an incredibly destructive energy beam. It’s worth trying them all just to work out which suits your playstyle, then concentrating on one or two classes until you grow adept.

And while you’re doing that, you’re also mastering Lawbreakers’ game modes, each giving an established classic a slightly different spin. Uplink, Overcharge and Blitzball, for example, are all variations of Capture the Flag, but Blitzball asks you to grab and run its sentient ball through a goal on your opponent’s side of the map, working against a shot-clock timer that resets if the ball spends too long in play.

Uplink has you capturing the uplink module and carrying it back to base to slowly upload its data, but cleverly your upload level doesn’t reset even when the module’s captured and the opposition scores. Thus the losing team gets a fighting chance at a comeback. Overcharge turns things the other way, with the two teams squabbling over a battery that also charges up at their home base. However, the point is won by whichever team holds the battery at the point it reaches 100%, so that it’s possible to steal a nearly-charged battery from your opponent’s base and score the point for your team instead. And while it might seem weird to have a cooldown shield to stop you grabbing it (or the uplink module) instantly, it actually makes sense. You’re here to fight, not just to cut and run.

Boss Key has been similarly playful with the control-point/domination-style modes. Occupy spawns a single zone on the map, which both teams race to grab. You score points while you have more players inside it, and after a while the zone disappears and spawns elsewhere. Turf War looks straightforward, but points lock down if you can hold them, pushing all the players to scrap it out over whatever points remain. 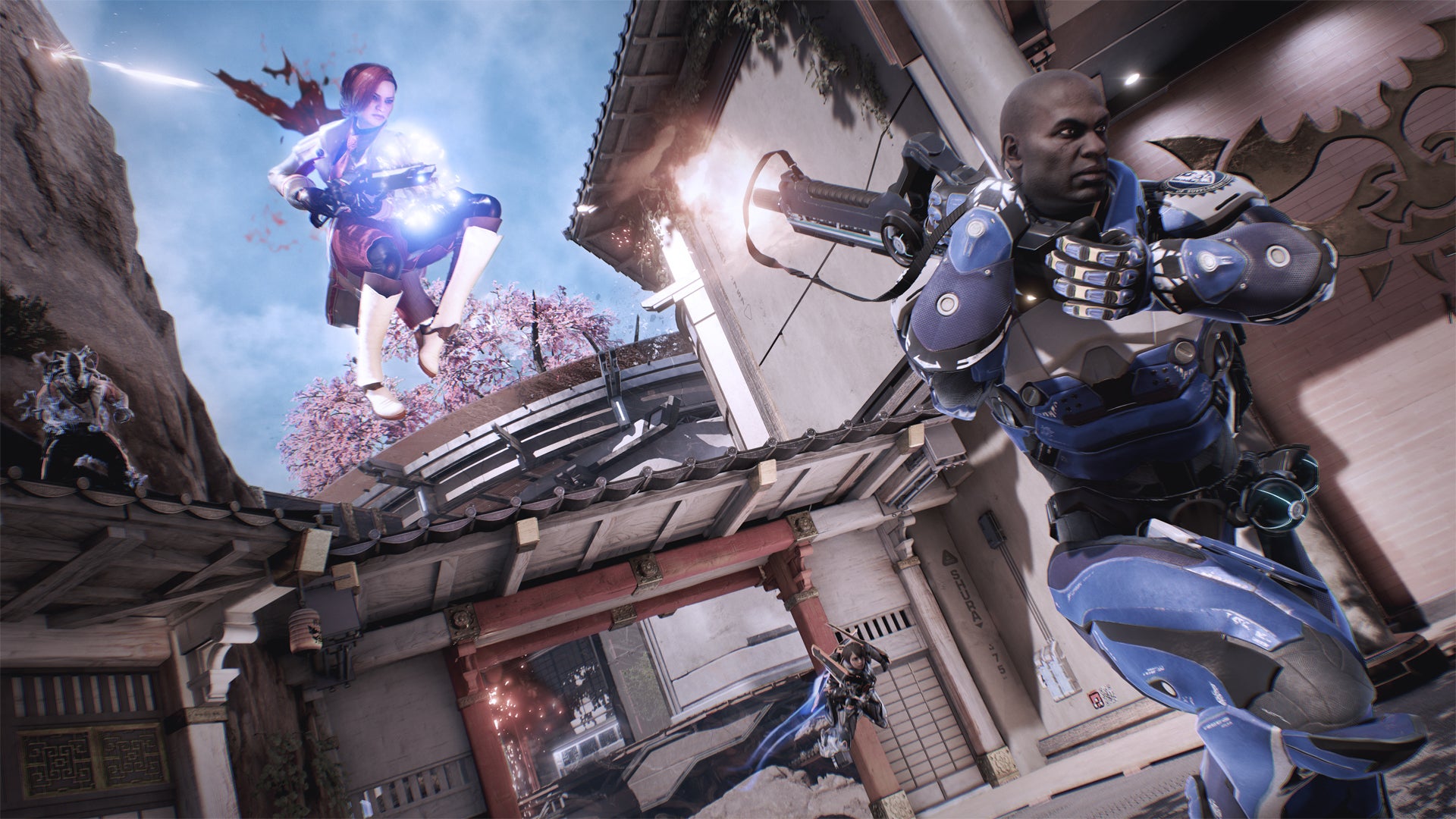 At first, this all makes for a sometimes frustrating and occasionally bewildering experience where you die an awful lot. To make things worse, Lawbreakers seems to suffer from a slight lack of personality. While Boss Key scores for producing such a diverse selection of badasses, they’re still slightly generic badasses, even with their quips. Sure, there are stickers, decals, weapon paintjobs and costume colours to unlock through playing – and you can splash out real money for more if you want to – but we’re still a long way from Overwatch’s distinctive, fan-friendly cast, or even Battleborn’s, come to that.

The same goes for the maps. They’re all well-designed in terms of flow, open areas and chokepoints. They’re all visually attractive in a gloss-white sci-fi kind of way. Yet I’m not sure I could pick many of them out from just a screenshot.

Yet the more I play Lawbreakers, the more I think its personality is better expressed through its gameplay than its visual design. The characters might not be all that interesting to look at, but they are very interesting to play. There’s something new and thrilling about its central anti-grav arenas, where you’ll often find teams duking it out in aerial battles over the blitzball or uplink module.

The sheer speed and skill of the combat – high on nerve and reflexes, low on auto-aim – gives it a slightly old-school feel I really love, taking us back to the days before iron sights and headshots ruled. And while I initially found the movement inferior to Destiny, Black Ops III or Titanfall 2, I’m beginning to change my mind. It’s different because each character is different, and once you’ve sped through the map, thrusted up to a foe holding the battery, blasted them, waited, grabbed it and flown home, you’ll begin to understand what makes this good. 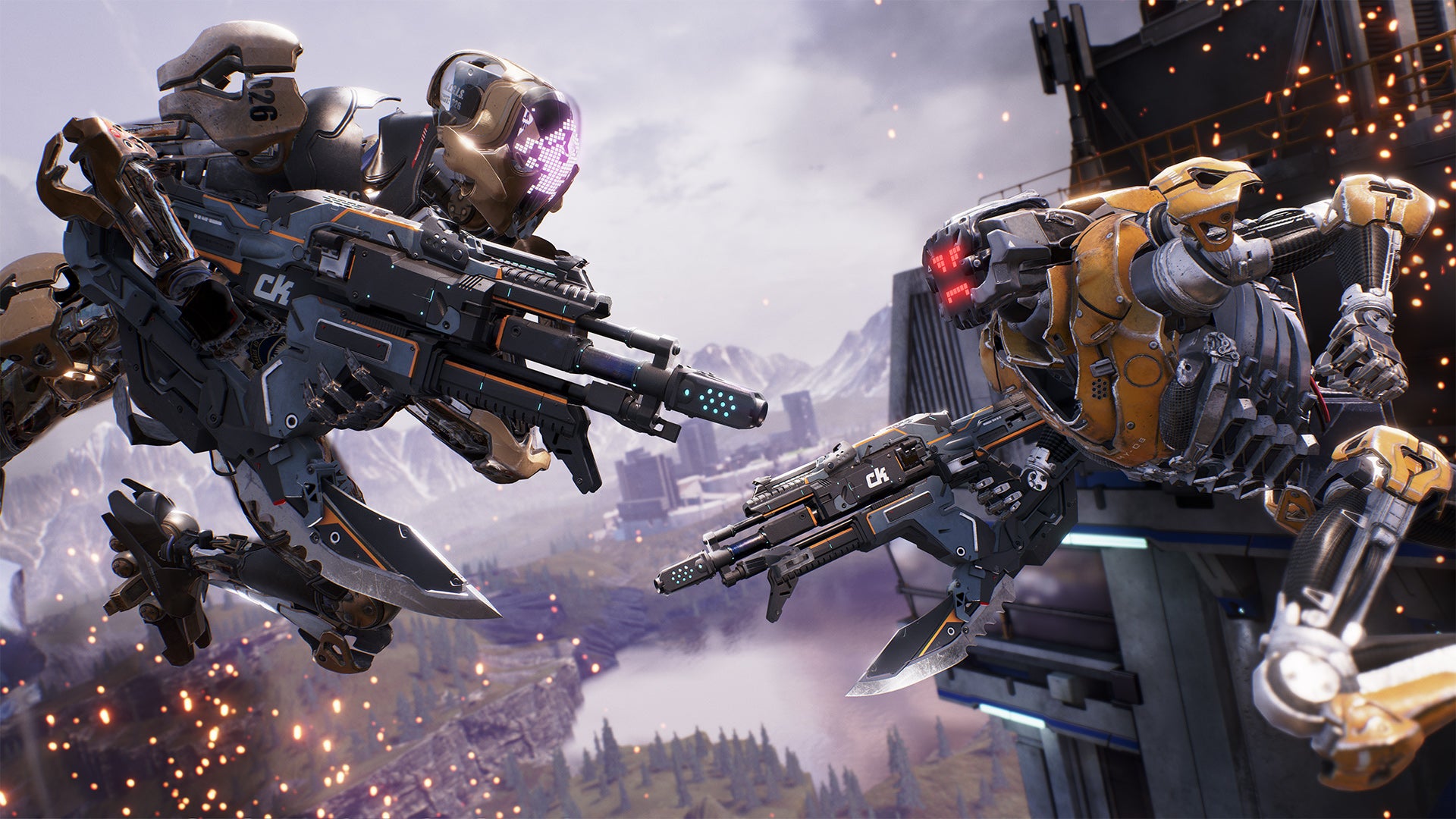 For me, the learning curve and the underwhelming characters and scene-setting are enough to hold Lawbreakers back from greatness – and it can’t match Overwatch for personality or the finesse and balance of the whole design. In a lot of ways Blizzard has rewritten the rulebook on how you feed the fanbase and keep them coming back long-term, and Boss Key has its work cut out to maintain pace. Yet I’ve had a lot of fun with Lawbreakers and I suspect I’ll have more in the future. It might not be the last word in the art of online shooters but it’s hardly short of ideas, ingenuity or action. What’s more, at a budget £24.99 the price is just about right.

It doesn’t have the colourful personality of Overwatch, but give Lawbreakers a chance. Get beyond the steep learning curve and you’ll find a team-based shooter packed with smart ideas and interesting mechanics, where great movement capabilities and a fine mix of weapons keep the action furious and fun.

If you’re looking for an online FPS where skill and speed matter, Lawbreakers has what it takes.