What is the Kobo Aura One?

When you think of an e-reader, you probably think of Amazon. There’s nothing wrong with that: after all, the company does make the best e-reader available right now with the Kindle Paperwhite.

But the Kobo Aura One shouldn’t instantly be dismissed just because it isn’t made by Amazon. In fact, it actually offers a number of features that I’ve been longing for in a Kindle for quite some time; notably a water-resistant body, a bigger screen and Pocket integration.

It’s just a shame then that Kobo’s ebook ecosystem can’t measure up to the giant that is Amazon.

Kindle Oasis aside, e-readers are bland devices, but that’s sort of the point. They’re meant to be all about the reading experience, rather than looking flashy. 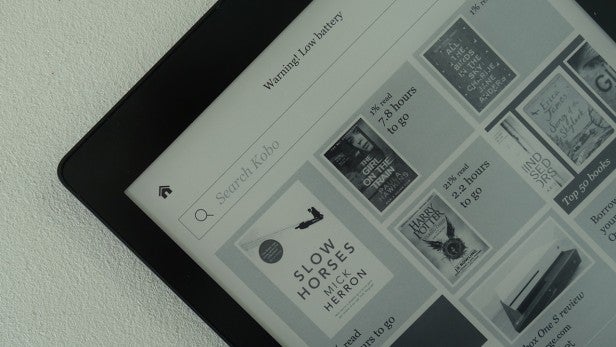 The Kobo Aura One doesn’t look flashy. It’s much more utilitarian and durable, but it works. It’s available in black – the rose gold obsession hasn’t quite reached e-readers yet – and the textured back makes it easy to hold in one hand.

On the bottom of the device you’ll find a micro-USB charging port, while the standby button sits on the rear. For some reason, this button seems prone to getting pushed when the device is in my bag. Countless times I’ve pulled out the e-reader to find that it’s already switched on. That’s a minor quibble, however.

What sets the Aura One apart from the entire Kindle range is its size. Instead of being a device that you can shove into your back pocket, the Kobo Aura One is more comparable to an iPad Mini in size. It’s still small in tablet terms, but it’s big for an e-reader.

Personally, I love the bigger size. It’s still light and thin enough to use comfortably in one hand, but it feels more like you’re reading an actual paperback. More text appears on each page, and navigating the UI doesn’t feel as cramped. 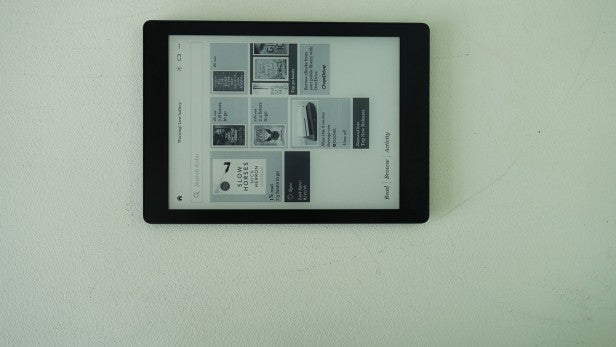 The one thing that I’m not a fan of is the Kobo logo that’s stuck on both the front and rear of the device. To be honest, Amazon is guilty of this too – but Kobo’s logo is even less pleasing on the eye.

Those niggles I can live with, however, because the Kobo Aura One is water-resistant – and that alone makes it great. While this isn’t the first Kobo packing a love of water, importantly, it doesn’t sacrifice looks for this ability as the Kobo H20 did.

Water-resistance is a great feature for any product, but more so with an e-reader. I can use it in the pool on holiday, by the beach, or in the bath. We never truly worry about getting proper books wet, so it makes sense to think the same way about an e-reader. Kobo claims that the Aura One can be submerged in 2m of water for 60 minutes, without fear of it becoming damaged. 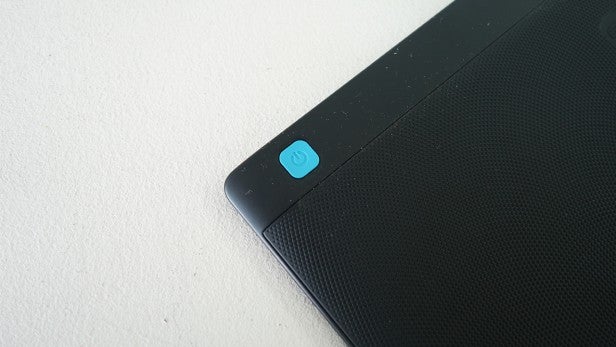 A 7.8-inch screen is considered small for a tablet, but it’s huge in a world of e-readers that generally sit around the 6-inch mark. It’s high-resolution too, with a 1,876 x 1,404 resolution, 300ppi display.

What the above amounts to is a fantastic reading experience. Text is crisp, while the Carta E Ink panel does a great job of limiting reflections. I can comfortably read outside in the sun – something that just isn’t possible with LCD-toting tablets.

Like all but the the cheapest Kindle, the Kobo Aura One has a built-in light that helps with night-time reading. It isn’t quite as evenly spread as I’d like, with a bunching of brighter light towards the bottom of the display. However, at least it has an auto-brightness feature, so you don’t need to fiddle around to change it manually. The auto-brightness works well too, slowly moving without any obvious jarring.

Related: How to stop your phone wrecking your sleep

Kobo has also added in a night mode, which turns the display a shade of orange. This is similar to what Apple introduced with Night Shift in iOS 9, and it removes blue hues that are meant to do more harm than good if viewed before sleep.

Personally, I think the orange-tinted screen is quite a distraction when reading. Especially since it intensifies the odd arrangement of LED lights; but the intentions are in the right place.

Kobo Aura One – Software and Performance

There’s plenty to like about the software running on the Kobo Aura One. However, it brings one major issue that almost makes the e-reader tough to recommend.

I’ll start with the positives, because there are plenty. Notably, the slick user-interface. Sectioned out into boxes, the homescreen not only displays your current read, but it also pulls in articles you’ve saved to Pocket (a fantastic, free, read-it-later service) along with the usual array of recommendations and “Top Books”.

It’s more information rich than the Kindle UI, and I really appreciate how it provides an overview of how much more you have left to read on each book without having to dive inside. 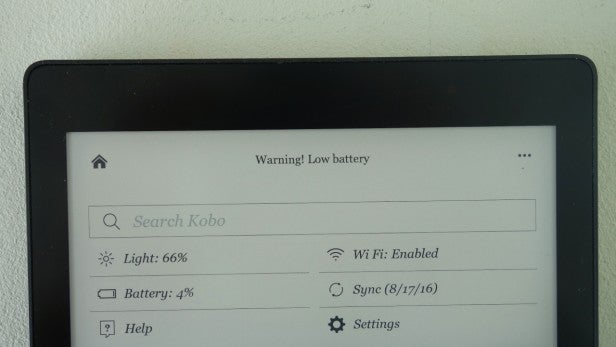 At the top of the homescreen is a search bar – another useful addition. Not only can it search across the Kobo book store, but also through annotations and the dictionary. It’s a powerful feature that makes finding new reads easy.

Navigating the UI is fairly fast too, although this isn’t uncommon for an e-reader. There’s barely any lag when jumping between books, but things slow down a little when a Wi-Fi connection is needed.

Unlike the Kindle line, the Kobo Aura One works just fine with open ebook formats such as .epub files. This means you can transfer – legally obtained, of course – books from a computer and read them without any issues. This is sort of possible on a Kindle, but you have to go through a fiddly conversion process first.

To try to combat Amazon’s Prime Lending Library, Kobo has a software feature called OverDrive. The idea is that you pop in a library card number and borrow free ebooks. I can’t say how well it works, since the service isn’t live/doesn’t work yet, but it’s a nice idea if the implementation works.

What renders nearly all the good work useless is the general Kobo ebook ecosystem. 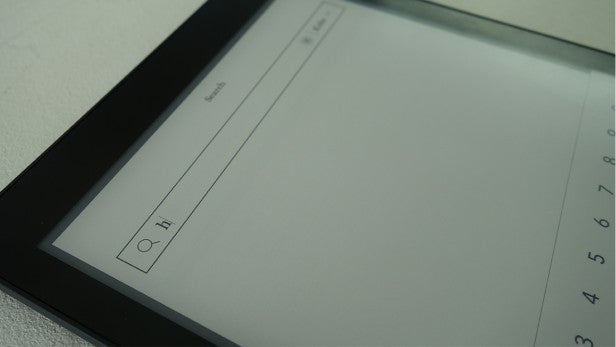 It simply isn’t in the same league as Amazon’s. Books tend to be more expensive, there aren’t the interesting reads from indie authors, and the choice just isn’t there. All the bestsellers are present and correct, but often it’s the cheaper and less obvious reads that are more enticing.

I also like the fact that Amazon almost constantly features offers – in the form of sales and reduction – or even just free books. There appears to be none of this on Kobo – and that’s a shame.

A good e-reader shouldn’t only last a few days, it should last for weeks, months, even. The Kobo Aura One isn’t the best e-reader I’ve ever tested when it comes to battery life, but it’s still impressive.

Kobo says you’ll get up to a month of juice before you need to reach for a charger, and those claims appear to ring true. Using the Aura One over a month, for about 45 minutes every weekday, and the initial charge aside, I didn’t need to plug it in for a top-up.

When it did finally die, it took 45 minutes to power it up to 100%. You won’t have to worry about battery life here. 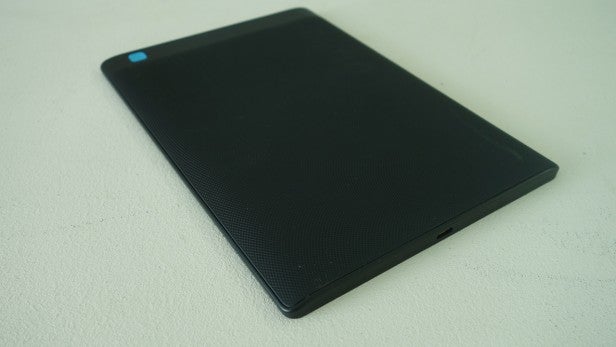 The 8GB of internal storage is plentiful, especially when book sizes tend to be measured in kilobytes rather than megabytes.

Should I buy the Kobo Aura One?

While Kobo’s devices have tended to disappoint  in the past, I’m taken with the Aura One. Instead of trying to mimic a Kindle, it offers something different.

The bigger screen might be divisive, but it’s great to have options – and I really like it. Things feel less cramped, and the experience of reading on the Aura One is more akin to reading a paperback.

There have been some clever software tweaks too, such as the night mode for protecting your retinas and the slick integration with Pocket. And finally, there’s the water-resistance, a feature that no Kindle can claim to have.

However, it isn’t only the device itself that puts the Kindle at the top of the tree, but the ecosystem built around it; Prime integration, Kindle Singles, the Lending Library, constant deals and freebies. Yes, the Kobo does add some library borrowing (which isn’t live at the time of review), but its general buying and book-searching experience just can’t match that of Amazon.

A big-screened, water-resistant Kindle alternative – but it’s let down by a poor ebook ecosystem.