Amazon’s latest iteration of the Kindle Oasis offers a minor upgrade to the 2017 model. It boasts the same wedged design, physical buttons for flipping through pages, plus a large, 7-inch e-ink display.

The only true upgrade is in the form of a “warmth” setting for the display, which gives the panel an orangey hue. This makes the panel more comfortable on the eyes if you’re reading at night.

The Oasis remains a great e-reader, but with the Paperwhite now packing many of its best features (flush display, water-resistance and audio support), the former is a tough sell. Especially at the £229 starting price.

With Black Friday here, now is the best time to plump for the Oasis – if that’s the Kindle you’ve had your eye on. My biggest issue with it was the high price, and with some heavy discounts currently available it’s a much more appealing product.

The Kindle Oasis (2019) is visually identical to the outgoing model. It retains the wedged design, in which the internals sit, along with a super-thin body and a display that sits further to one side.

You’ll find two page-turning buttons on the side of the device – both of which are responsive and clicky – plus a power button along the top. My one issue with the Paperwhite is the lack of physical buttons; I much prefer having a tactile press to flip through pages over a tap of a screen.

The Kindle Oasis (2019) feels like a device designed for one-handed use, since it includes a defined area from where you should hold the unit. Hold it with your thumb positioned on the top page-turning button and your fingers will naturally rest in a smooth groove on the device’s rear. There isn’t another e-reader out there that’s seemingly been designed with the thought of the Oasis, and this results in a device that feels truly high-end in your hands. 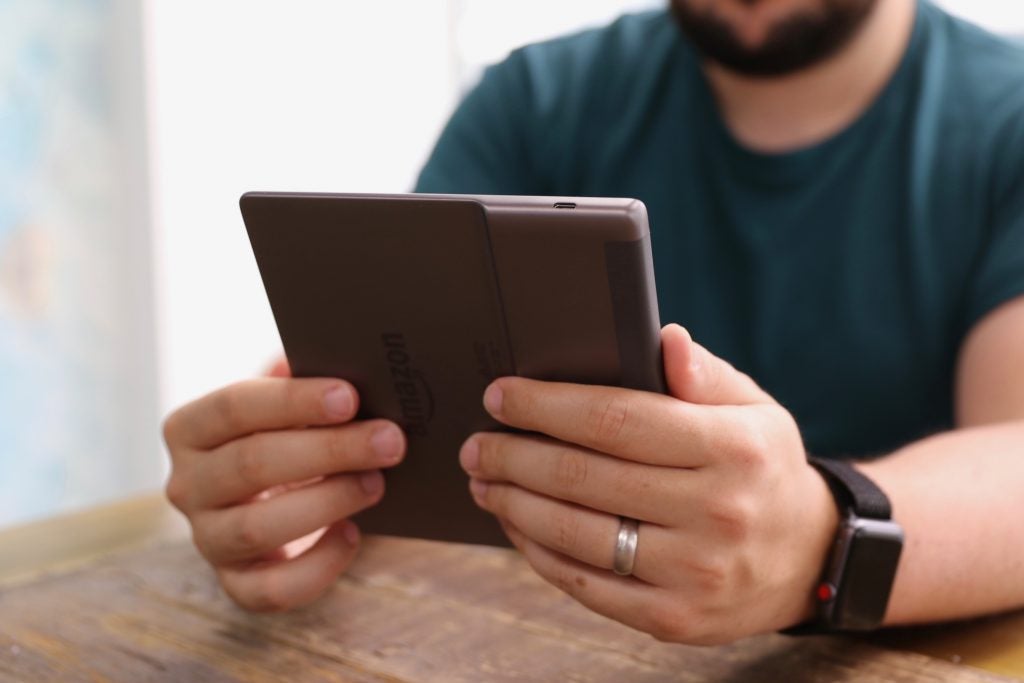 The rear makes it easy to hold

If you prefer to hold the device with two hands then I’d suggest picking up a case, since without one the Oasis can feel a little sharp around the edges and slightly lopsided. Thankfully, even with the aluminium body, it’s a super-light device; I could comfortably read for a couple of hours without feeling the strain.

Water-resistance was first introduced to the Kindle line in the 2017 version of the Oasis, and it made that device almost worthy of its lofty price as a result. Since then, the Paperwhite has come with the same IPX8 rating, meaning there’s no longer a reason to pay over the odds for the feature. The IPX8 rating remains the same here, meaning it will happily survive being submerged in 2 metres of water (Amazon states “fresh” water) for an hour.

Screen – The best screen on any e-reader, now with an adjustable level of warmth

At 7 inches, the Kindle Oasis has the biggest display of any Kindle reader. However, it can’t quite match the Kobo Forma, which comes with a huge 8in panel.

It might be generously sized then, but it isn’t too big; it just feels a little roomier than the Paperwhite. Text appears less crowded, so you’re able to see more on a page without having to reduce the font size. While this doesn’t offer a huge difference, it’s still noticeable.

The most significant, and really only, update for this new Kindle Oasis model is the addition of a warm light along with the standard 25 LED front light. While the front light makes the E Ink display brighter, the warm light adds in a variable orange hue. We’ve seen this in Kobo readers, and it’s commonplace on phones, but this is the first time such a feature has been included on a Kindle.

It’s a nice touch, too – one that makes it the device far more comfortable for reading at night. The amber tones are easier on the eyes. To be completely honest, I’ve found that I actually prefer to keep the device on this setting at all times, since it results in a nicer overall experience. 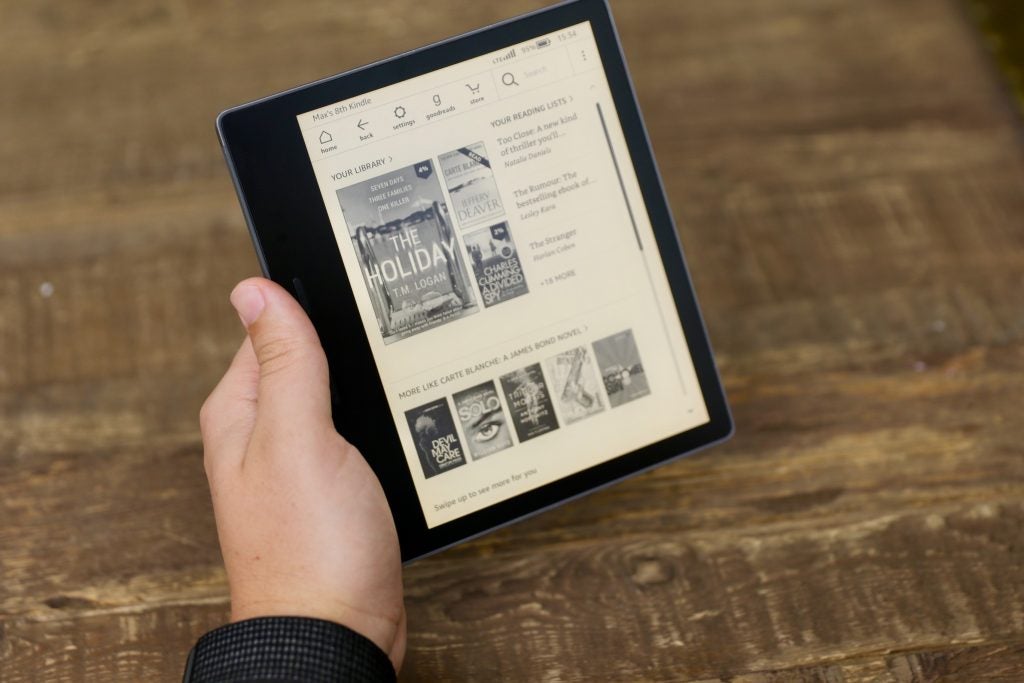 The screen is big and crisp

If you prefer switching to the warm light only at a certain time then Amazon has built in a handy scheduling tool that gradually changes the colour from sunrise to sunset, or from a specific time.

The 25 LED front light system on the newest Oasis – in comparison to the Paperwhite’s six – is the best in the business. It’s evenly spread across the entire display, with no areas brighter (or darker) than others, and it offers a superb range of brightness levels to suit all environments. There’s an auto-brightness option, too, which alters levels automatically. This works OK, but it’s far slower than you’d expect from auto-brightness on, say, a phone. I often found myself reaching for the manual slider before it kicked into gear.

Amazon is great at ensuring all of its readers are on a par when it comes to software. Whether you pick up the older Oasis, the Paperwhite or the new Oasis (2019), you’ll have a very similar software experience. Aside from scheduling the warm light, there’s nothing specific to the new model in the software.

For a long time, Kindle devices didn’t offer support for audiobooks, but since Amazon has gone all-in on its Audible service, this is no longer the case. If you have Audible books in your library then these will combine with your Kindle books, and if you have both versions then you can easily flip between listening and reading.

It should be noted that there are no speakers onboard, however, nor a headphone jack. As such, you’ll need to pair some wireless headphones or a Bluetooth speaker with the device. This is a slight faff, but at least the option exists.

The base Oasis comes with 8GB storage, which is great for books. However, if you’re planning to store lots of long audiobooks (Harry Potter and the Order of the Phoenix is nearly 1GB, for example) then you would be better off with the 32GB model.

For those with more money to spend, there’s a 4G connected model too. This provides a “free” data connection wherever you have signal. However, you can download only books via this method, not audiobooks, and it will affect battery life considerably. It’s a handy extra, and ideal if you travel frequently into areas where you may not always have Wi-Fi access. 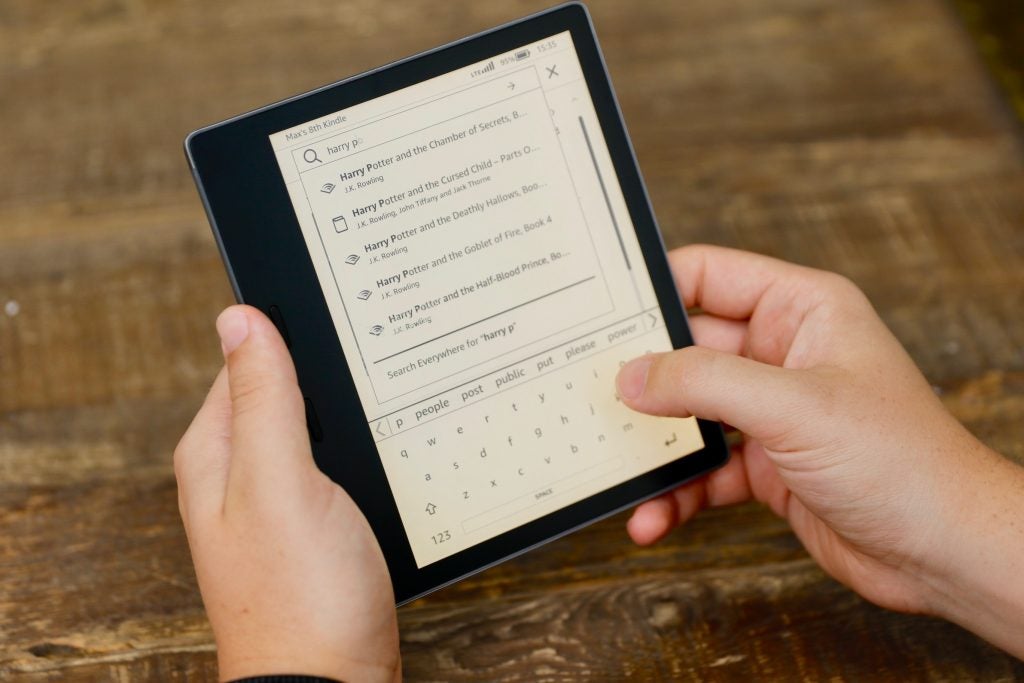 The Amazon Kindle store is great

Of course, the overriding reason that Kindle devices remain the best e-readers going is the excellent bookstore. Not only do you get the usual array of new releases, you get extras such as cheaper Kindle Singles, access to the subscription-based Kindle Unlimited, and free books if you’re an Amazon Prime member.

For such a luxurious product it would have been nice for Amazon to throw in a free Kindle Unlimited pass, especially when you’re paying so much for this reader. The entire Audible library is available here, too.

Battery life – What you’d expect from a Kindle

Judging a Kindle’s battery life is harder than a phone, tablet or laptop. Amazon states six weeks of juice per charge on its site if you read 30 minutes a day. However, read for longer then the battery will drain much faster.

During the review period I read roughly two hours a day, which drained about 5% battery each day. That’s decent endurance. If you’re off on a two-week holiday then the Kindle Oasis (2019) is likely to see you through that period if you happen to forget the charger.

In my review of the previous generation of the Kindle Oasis I said the following: “Amazon has also stuck with micro-USB, rather than switching to the now more common USB C. This is hardly surprising, however: Amazon hasn’t converted to USB-C yet with any of its products. Nevertheless, for a product that’s unlikely to see an update for a few years yet, it’s disappointing.”

Two years later, and Amazon is still using the old generation of USB for its flagship reader – and it’s a bit of a pain. Maybe next time?

Even though the Kindle Oasis (2019) is an absolutely fantastic device, it remains a hard sell for anyone but the most ardent of e-reader fans. It certainly isn’t worth the upgrade if you have the previous model.

With the Paperwhite offering many of the same features for nearly half the price, and even the £69.99 Kindle packing a front-lit display, you have to really want that slightly larger display and warm light.

If you do have the cash, though, and want the classiest e-reader going, you won’t be disappointed.