Like tablets, e-readers have seen minimal innovation in the past few years. Amazon seems to have settled on its Kindle lineup and there isn’t much in the way of competition. Aside from Kobo, that is, which has been churning out some rather decent e-readers of late.

I was a huge fan of the Kobo Aura One and the older Aura H2O, and the new Kobo Aura H2O (2017) adopts many of the features that made those previous models so good.

It’s a shame, then, that the new Aura H2O falls a little short, notably with its strange battery life and sluggish performance. But if you’re after a water-resistant model then the Aura H2O offers a decent alternative to the overall superior Kindle Paperwhite.

Kobo’s industrial design edges on being more durable than stylish – which, for a device that’s likely to spend much of its time being thrown into a bag alongside other items, isn’t the worst thing.

The black plastic body is strong and well built, while the dimpled rear is grippy if a little basic. Kobo’s logo is stencilled into the rear of the device, while there’s a blue power button in its top corner. I like the fact that you actually have to press the button quite hard for it to respond, meaning it won’t accidentally burst into life in your rucksack. 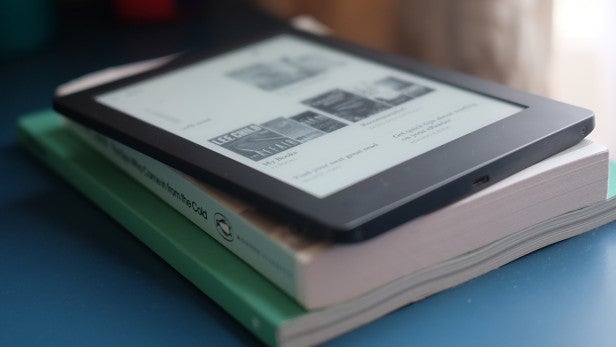 At 6.8 inches, the Kobo Aura H2O has a larger screen than any Kindle model currently on the market, and the generous screen size does make for a device that’s bigger, thicker and wider overall. I can comfortably hold a Kindle Paperwhite in one hand, but the width of the Aura H2O makes this difficult.

It also isn’t of a size that will slip into your back pocket – something I do actually find myself doing with the Kindle Voyage. Still, it’s light enough (210g) to not add much weight to a bag and comfy enough to hold for extended periods.

As the name suggests, the Aura H2O is water-resistant. This is a feature I’ve been calling for Amazon to add to its Kindles for some time now, and one that seems an obvious choice for a device that’s likely to be used in the bath or around the pool on a holiday.

Kobo says the Aura H2O will happily survive a dunk in 2m of water for up to 30 minutes, and having dropped it in the bath on a few occasions, I’m pleased to say that it hasn’t suffered any detrimental effects. Its water-resistance is the biggest reason to buy this e-reader.

The Aura H2O’s 6.8-inch Carta E Ink display is nearly an inch bigger than any Kindle, and it does make for a much roomier reading experience. It’s sharp, too, with a 256ppi resolution for crisp text in books and detailed pictures in comics. That ppi figure is lower than the Kindle Paperwhite and Voyage, both of which have a 300ppi display – but unless viewed side-by-side, you’re unlikely to notice any difference.

I do much prefer the Kindle Voyage‘s screen in that it sits flush with the bezel; the dip on the Aura H2O is the perfect place for dust to become caught. But the Voyage is slightly more expensive.

In addition, I still don’t believe the light – which is a frontlight, rather than a backlight – is as bright or as evenly spread as it is on the Kindle Voyage, with the corners of the Aura H2O noticeably brighter than the middle. Nevertheless, it does a good job for those nighttime reading sessions where you don’t want to disturb your partner. 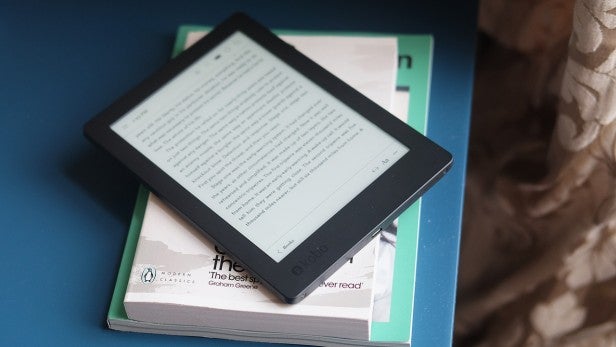 Kobo has added a neat trick to the display: a ComfortLight Pro mode that dims the backlight according to the surroundings and limits the blue hues emitted at night. It’s similar to Night Shift on an iPhone, and something that made a notable difference to eye comfort when I was using the Kobo Aura One, so it’s nice to see it here too.

There’s no auto-brightness mode, though – again, something the Kindle Voyage has – so you’ll have to manually alter it depending on your surroundings.

This is where the Kobo Aura H2O falls down. Initially, Kobo claimed the H2O would last a week – an odd claim for an e-reader – but the brand’s site now claims “weeks of usage”, which is much more in line with the competition.

Still, I haven’t been overly impressed by the stamina on show here. I’ve been using the Aura H2O on the majority of days over the past week or so, and it’s already down to 30%. Considering I’d normally expect a month or so of use from an e-reader, I’m not convinced the Kobo Aura H2O will make it.

My other constant issue with the Kobo Aura H2O is the performance, which is inconsistent and often frustrating. Even though there’s a 1GHz CPU tucked inside the plastic body, the software often hangs. The keyboard will stick and refuse to switch letters, and I’ve experienced slow page-turns on numerous occasions. I’ve even had to restart the device twice as a result of it crashing – something I’ve never before had to do with an e-reader.

There’s 8GB of internal storage, which is enough space for thousands of books. The previous generation of the H2O had a microSD slot, but that’s gone here. 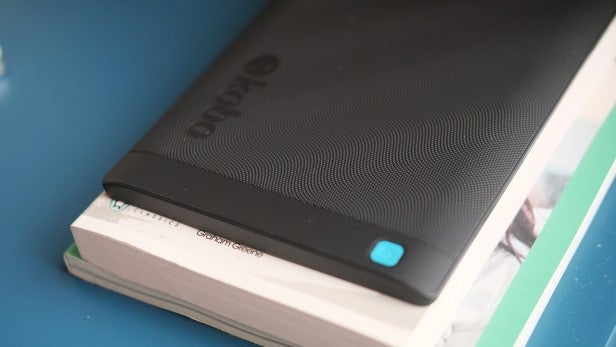 The software itself is decent, and in a few ways I prefer it to Amazon’s UI. First, there’s integration with both Pocket – a fantastic read-it-later service that syncs saved web pages across devices – and Adobe Digital Editions.

In addition, you’re not restricted to books downloaded from one store, as you can load your own EPUB files here and even use some library lending services. Coming from the excellent, but heavily restricted Amazon ecosystem, this is refreshing.

Kobo’s actual bookshop lacks the neat self-published content you’ll find on Amazon, but it still has a huge selection of titles on offer at similar prices.

If you simply must have a waterproof e-reader, and the larger Kobo Aura One is outside of your budget, then go for the Kobo Aura H2O. Also, if you can’t possibly be stuck in the Amazon ecosystem, the Kobo is again a good option.

They offer more consistent battery life, are faster and feature more reliable UIs – and, of course, the huge Amazon store behind them. I also much prefer the slimmer and narrower design of the Kindles, to the larger and wider Kobo.

At £149.99, the Kobo Aura H2O isn’t the cheapest and it has one too many frustrating aspects to be suitable for all.

A decent e-reader in certain scenarios – but uneven battery life and sluggish performance take the shine off.