Introduction
Apple likes to refresh its products fairly regularly. Each year, the iPhone and iPad get a facelift, but some of the iPod brothers aren’t so lucky. The iPod Classic hasn’t been overhauled properly since 2007, and the iPod shuffle has been the same since 2010. But has anything changed in the 2012 iPod Shuffle, and is it still worth buying?

The iPod shuffle was given a nod at the launch of the iPhone 5, making us wonder whether Apple had decided to tweak the design of this tiddly solid-state music player. It hasn’t, not much anyway. 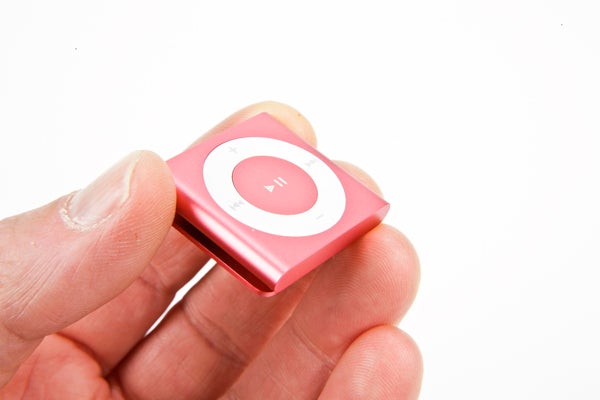 The biggest change made to the iPod shuffle in 2012 is that several new colours have been introduced. It’s now available in six colourful hues – red-pink, full-on red, purple, lime green, green, and turquoise. The aluminium construction hasn’t changed, lending each a subtle metallic finish.

There are many criticisms that can be aimed at the iPod shuffle, but the build is hard to fault. The one seam in the little metal body of the player keeps tightly to the outline of the clip on the rear, making it invisible in normal use. To adopt today’s smartphone terminology, the iPod shuffle uses an all-metal unibody style design that makes almost all other players at the price seem a little flimsy. 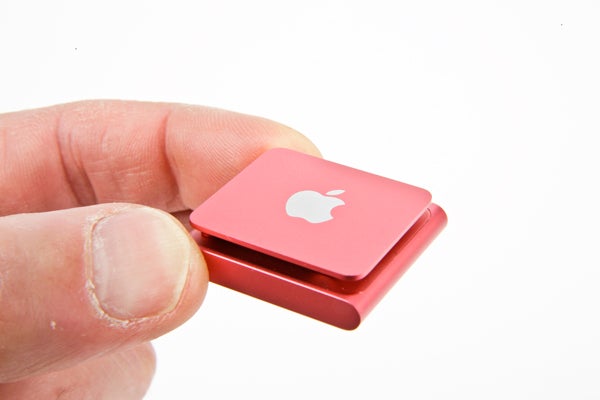 It’s not just the use of metal that upholds the Apple reputation for build quality, either. The button action and the satisfying clunk of the function switch up top are all that bit better than you’d get from most rivals at the price.

The hardware downsides to the iPod shuffle are obvious, though. This is a painfully simple device, with no screen and limited control over which track is playing.

Basic control over track playback is actually much better than average, the whole front of the shuffle given over to an immensely thumb-and-finger-friendly circular control dial that is contoured for blind use. It’s the wider control over what’s playing that’s the issue. 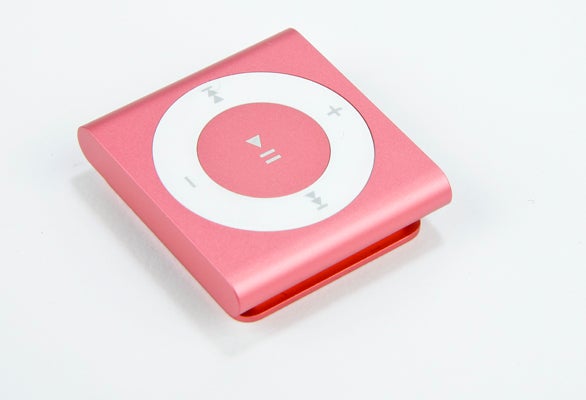 For this, you have to rely on the 3-setting switch up top. Position one turns the player off, position two plays the tracks in the order they are arranged on the player, and the last turns on the shuffle mode that the player is named after. 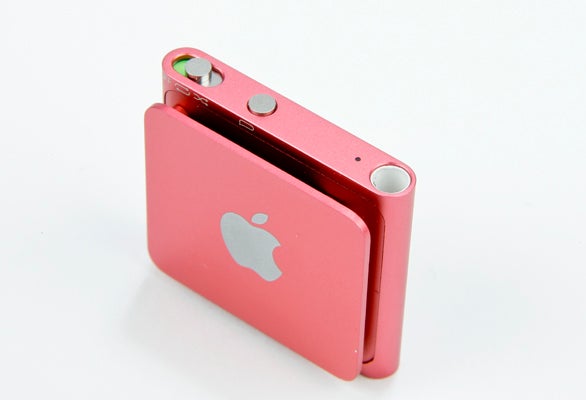 To get any real sense of control over the order of tracks, you’ll have to use playlists, made using iTunes. However, you’re not left entirely out at sea if you don’t know your music collection by heart either, thanks to the VoiceOver button that sits next to this playback switch.

Tap once on this button and a voice synthesised read-out of the title of the track playing will pipe out. A long press on the button will tell you the album, track and playlist that the track belongs to, while a double tap reads out the battery level. The standard synthetic voice is a rather well-spoken woman of near-RP English accent. It works surprisingly well, and lacks the cringe-factor of rival audio-based features such as Sony’s Zappin mode.

VoiceOver doesn’t rely on any involved processing on the iPod shuffle’s end. Instead, it is something that has to be enabled within iTunes during the setup of the player. iTunes generates mini sound files of the readouts, transferred to the shuffle along with the songs themselves during sync. 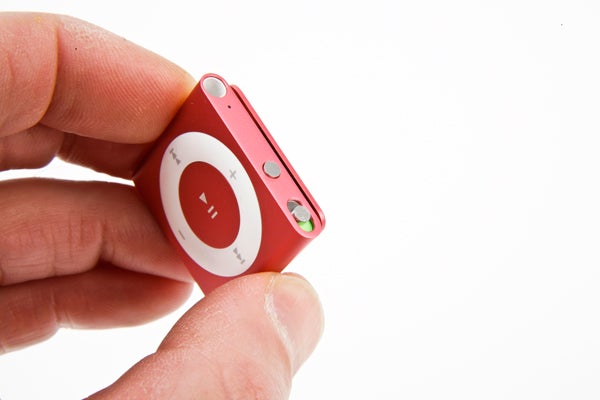 Like every Apple music player, you need to sync using iTunes with the iPod shuffle. There’s no option to drag and drop, which is likely to annoy those who don’t already use iTunes as their go-to computer music source.

Format support is also the standard among the iPod family. AAC and MP3 are the two main types supported, with Apple Lossless, AIFF and WAV available for those not willing to sacrifice quality for file size. With just 2GB of internal memory, though, using lossless formats is not a great idea. Stick to 192kbps quality or lower and you should be able to fit 25-30 albums on the shuffle.

Apple recently unveiled its new EarPod headphones, which sell for the same price as the previous earbuds, £25. However, Apple’s dinkiest media player sticks with the old style earphones. These produce significantly poorer sound than the new EarPods, and should ideally be replaced as soon as possible. They also leak sound terribly, and offer virtually no isolation. 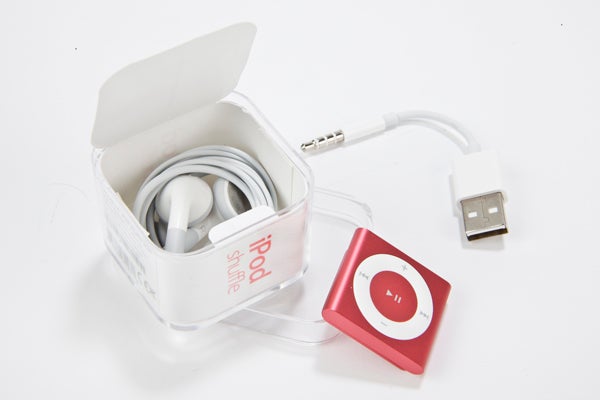 The iPod shuffle also misses out on the new Lightning port, which has replaced the traditional proprietary 30-pin adapter. Like the 2010 iPod shuffle, the player is still charged using the headphone jack.

A special 3-band 3.5mm cable is used to plug into a computer for charging and sync. It’s only around 10cm long including plugs, as the shuffle is light enough to leave dangling from a USB port without causing damage. 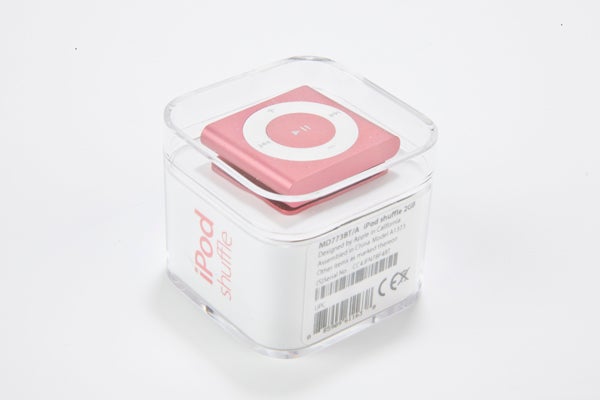 The iPod shuffle battery lasts for up to 15 hours, which is roughly on-par with most rivals at the price, including the SanDisk Sansa Clip and Sony NWZ-B173. With no screen or additional connectivity to drain the battery further, the battery life quoted is pretty accurate.

As an extremely simple music player with a basic set of features on-board, that the iPod shuffle doesn’t offer any control over sound quality should come as no surprise. Beyond volume, there’s nothing. You can apply equalisation manually to your tracks before they’re transferred to the shuffle, but it’s hardly an elegant solution. 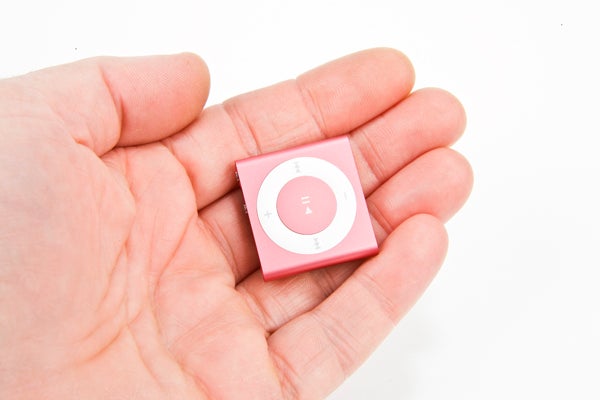 Base sound quality of the iPod shuffle is comparable to Apple’s other mobile devices. It’s clean and it goes plenty loud for just about any portable pair of earphones/headphones. Apple is regularly criticised for the supposed poor sound quality of its players, but any sound roadblock here is much more likely to be down to the quality of your headphones than the player itself.

And if you have £200 headphones, we think it’s unlikely you’d use an iPod shuffle as your main music player.

For a player that has been around in the same form for several years, the iPod shuffle has aged extremely well. It’s a device that has aimed itself at a particular casual or sporty usage, and as such has protected itself from the aging influences of the tech innovations of the last few years. 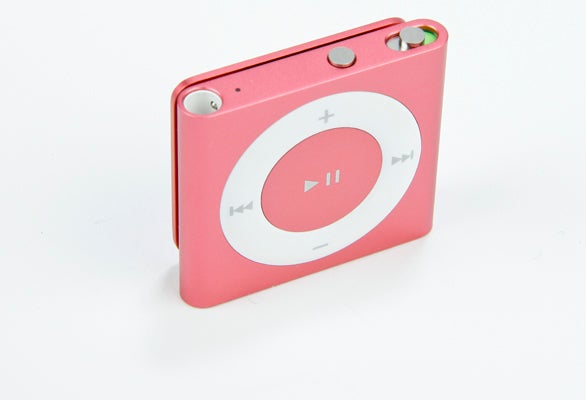 The iPod shuffle is not a player we’d recommend serious fans use as a main music player, and most casual listeners would be better off with something like the SanDisk Sansa Clip Zip if it’s to take on daily duties. The lack of a screen is a huge drawback in this sort of situation. However, as an MP3 player for runners or gym fans, there are few better choices, at any price.

Apple did not make any grand functional changes to the iPod shuffle in 2012. But in keeping things simple, Apple has ensured the continued longevity of this postage stamp-sized player. If you want a day-to-day workhorse music pal, this is absolutely not what we’d recommend. But if you want something that will provide tunes while you’re out exercising, it’s one of the very best options around.