It’s hard being the runt of the litter, and the iPod shuffle knows it. When your bigger siblings are the iPod nano and iPod touch, it’s hard to impress anyone if you’re little more than a piece of flash memory with a headphone jack. Not that there isn’t a market for the iPod shuffle’s class of player, but it hasn’t had the easiest development. 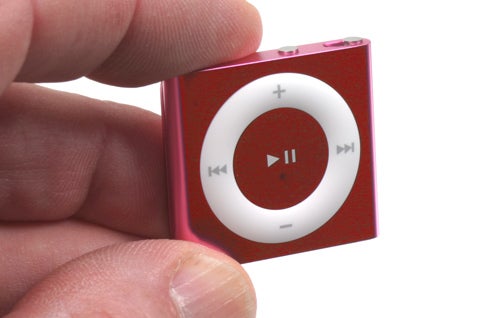 If we were being generous we might argue that the world just wasn’t ready for the groundbreaking and innovative removal of controls from the third generation device. If we were being realistic we’d point out that that it was an ill-considered and unwelcome move for Apple. Suffice it to say that the re-addition of controls to the body of the fourth generation iPod shuffle tells us everything we need to know about the reception received by the last one. Attractive it may have been, but it was definitely flawed.


Fortunately for the iPod shuffle, despite the presence of volume, track selection and a play/pause buttons on its face, along with a three-way selector and a small VoiceOver button up top is far from ugly. And though its larger than its predecessor, the 29mm x 31.6mm x 8.7mm, 12.5g device is still small and light enough to be barely perceptible when attached to your clothing using its built-in clip.


The VoiceOver button takes the place of the press-and-hold action on the in-line remote of the previous iPod shuffle – although if you have a compatible headset, that still works. A press has the iPod shuffle pronounce the currently playing song and artist to you, while a hold cycles through the available playlists, with a further press selecting the last mentioned. Because this control no longer doubles as the play/pause and track-skip button as it did with the in-line remote it’s much easier to navigate between playlists now. 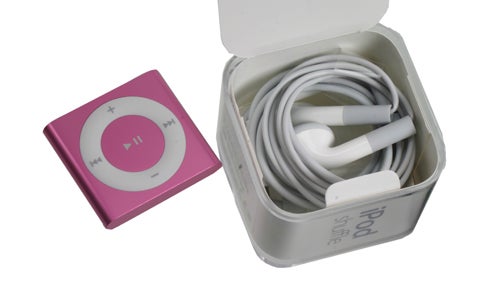 You probably won’t have all that many playlists on your iPod shuffle, though, because it now comes exclusively with 2GB of flash storage – your only options are what colour you decide on. However, considering how portable the new iPod nano is, the issue isn’t the lack of a larger capacity but equally portable player in Apple’s iPod line-up, but rather that of pricing. The gap between the 2GB, £39 iPod shuffle and the £129, 8GB iPod nano is enough that we doubt anyone looking at the shuffle would consider making the jump.

As we’ve remarked before, however, a low capacity isn’t really an issue for a player like the iPod shuffle. 2GB is enough capacity to fit close to 12 hours worth of 320kbps MP3 files. While that does mean you’d hear a few duplicates before the iPod shuffle’s 15-hour battery died, it’s unlikely that most users would be unable to find a computer and sync some new playlists across in between gym sessions.

A greater annoyance is the continued use of a USB to 3.5mm jack adaptor for connecting the iPod shuffle to a computer, or wall charger. The proprietary dock connector on other iPods is bad enough, but at least it’s ubiquitous enough that finding a spare cable, or a dock, to charge your device with is never a problem. The Shuffle adapter, on the other hand, is a small and easily mislaid item that is much less common place. Still, Apple tends to be pretty good about offering spares if you can ask nicely at the Genius Bar so it shouldn’t be too big an issue.


What is an issue is the requirement to use iTunes. With the larger classes of iPod, we can forgive the symbiotic relationship, but on a player that doesn’t need to tie into the App Store, can’t play videos and barely needs any kind of library management, it’s a bigger frustration. The iPod shuffle’s type of portable, quick-and-easy to use MP3 player really needs to be drag and drop. And while we accept that many iPod shuffles are likely to be purchased supplementary to other iPods solely for use when working out – so the users will already be using iTunes anyway – it’s still frustrating.


Interestingly the iPod shuffle seems to mimic the improvements the latest iPod nano and iPod touch made to their audio quality. The iPod shuffle still isn’t going to blow you away with its lifelike reproduction of Beethoven’s 9th, but it can definitely hold its own against alternative players. 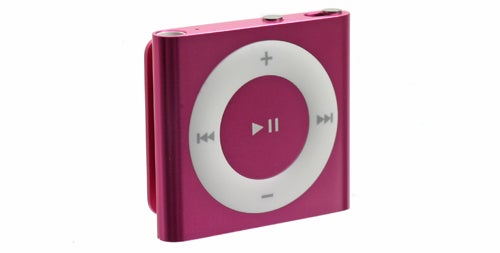 Speaking of which, we’d be remiss not to point out how expensive the iPod shuffle is considering the feature set. The Cowon iAudio E2, for example, is comparably small and attractive, offers drag-and-drop music management and costs 25 per cent less than an iPod shuffle at only £30 for the same 2GB capacity. Or even better, the same money will net you a much-lauded (and rightly so) Sansa Clip which is simply, for want of a better description, a better player and hardly less portable.


The fourth generation iPod shuffle goes a long way to redeeming the failings of its predecessor. Physical controls make a welcome return, without making the device notably less portable or stylish. As ever, though, cheaper, more capable alternatives are available.