If you want a full-size MP3 player, there are few reasons not to go with Apple these days. The iPod range offers decent audio quality, an unbeatable interface and superb styling. However, if you want a small, cheap player, there’s significant competition for the iPod nano and shuffle. The SanDisk Clip Zip is a new contender, a full colour upgrade to the Clip . It’s dinky, packed with features and costs less than half the price of the nano.

What you miss out on is style. The SanDisk Clip Zip is made of plastic and it uses physical buttons rather than a touchscreen. Its key design conceit is similar to the iPod nano, though. The whole of its back is taken up by a giant shirt clip, which makes this MP3 player a sound choice for runners and gym-dwellers. However, if you have no compulsion to work out, the clip doesn’t add enough bulk to spoil its fairly petite dimensions.

The SanDisk Clip Zip is 14mm thick and fits comfortably into the palm of you hand. It’s small enough to slip into a pocket without constantly reminding you it’s there, and at 25g it is also extremely light. 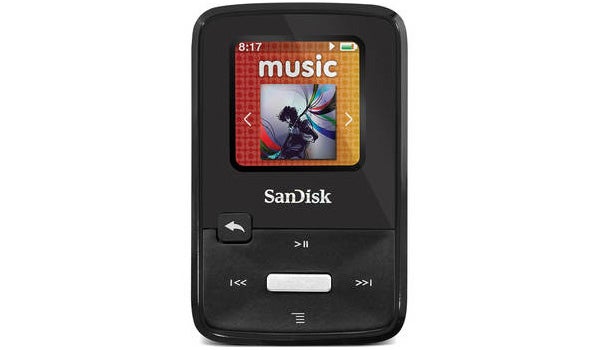 Connectivity and ease of use don’t suffer as a result. The front features full playback controls, arranged as a D-pad and central select button, and there are volume control buttons on its left edge. However, the on-body feature that will convince many to buy is the microSD memory card slot, on its right edge.

The 8GB version of the Clip Zip costs as little as £45, but add a £25 32GB card and you can boost its memory to 40GB. None of Apple’s audio players feature expandable memory, and its nano range maxes-out with the £130 16GB version. Choose the 4GB version of the Zip and you can choose from six colours, including orange, blue, white and – seen here – black. The 8GB version is only available in grey and black.

Its extra features don’t stop there. Up top is a tiny mic, and there’s an FM radio with recording, which uses the headphone cable as an antenna. It doesn’t have everything, though. There’s no Bluetooth – used by most wireless headphones – and zero app support.

Build quality is reasonable but unremarkable. The screen cover is plastic where high-end touchscreen players use glass and the Clip Zip’s circuit board is visible through the memory card slot. As it’s so light, it’ll handle rough treatment, but there are plenty of reminders that in buying this you’ve scrimped a bit.

The screen is another of these reminders. It’s 1.1in across and uses a low 96 x 96 pixel resolution. This offers just half the pixel density of the iPod nano, leaving text and images looking blocky. The Clip Zip screen is basic, but clarity is decent. It’s fairly bright and viewing angles are good for a low-end panel. However, this is one area that the iPod nano can claim a clear victory.

If you couldn’t care less about having a colour screen, the slightly cheaper Clip is also worth considering. It has a similar feature set, only lacking AAC playback and the full-colour screen. As the improved SanDisk Clip Zip display seems a clear response to Apple’s nano, here’s a run-down of how the two compare. 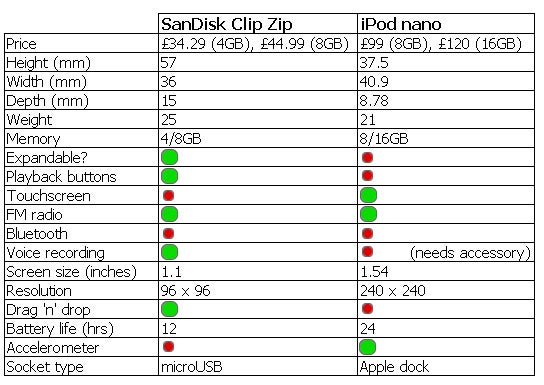 As this table clearly shows, the SanDisk Clip Zip offers much better codec support than the restrictive nano. The most important is FLAC, a popular lossless format, and – along with expandable memory – support for it is another compelling reason to choose this player.

Transferring files is simple. It uses MTP (Media Transfer Protocol), which makes its internal memory show up as a media drive when attached to a computer. Once recognised, you can drag and drop files rather than having to use specific software.

There are some irritating niggles to this process, though. Transfer speed is fairly slow, maxing-out at 4.5MB a second, and upon first transferring a bundle of tracks to the player, its software got stuck in its database updating process, requiring a hard reset.

Further research suggested this was a problem with the Clip Zip’s approach to ID3 tags, which store information such as artist and genre. Like the so-so build and basic screen, it’s a reminder that this is a budget player that requires a little more patience than some more expensive models.

The SanDisk Clip Zip uses a simple interface that doesn’t have the flashiness of a top-end Sony or Apple player. Each feature has its own “page” on the horizontally-scrolling main menu, and the music navigation style is entirely standard. You can browse by artist, album and other tags or sift through any recently added picks.

SanDisk has done its best to make the interface look friendly and fun, using plenty of colour, rounded fonts and animated transitions, but the blocky screen ensures it never looks particularly good. It is intuitive, however, and although the front buttons feel a little cheap they’re positioned well-enough to make browsing through your music comfortable. 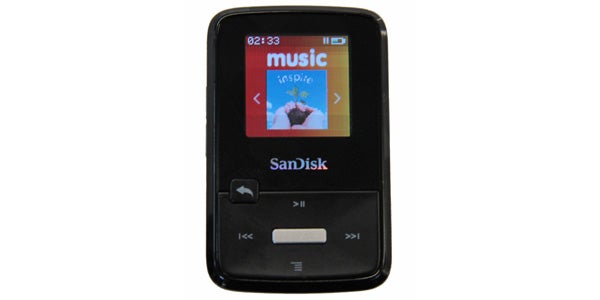 The player’s audio output is clean and sound quality is good. However, it restricts volume to an unusually great degree. If you have earphones or headphones that are difficult to drive, like the Phonak Audio PFE 012, maximum volume may be required.

There is a way around this, though. Perform a factory reset, tell the player it’s in the US – rather than EU – during setup and the volume limit disappears. Without the limiter maximum volume is much higher than most, and there don’t appear to be any drawbacks to telling the player it’s a yank.

There’s an inbuilt equaliser nestled within the settings menu, but sound customisation is not a forte of the Clip Zip. 10 presets are included, as well as a custom option, but all are based on a ham-fisted 5-band EQ. Without the subtlety of the system fitted into players like the Cowon J3, it’s not much use. 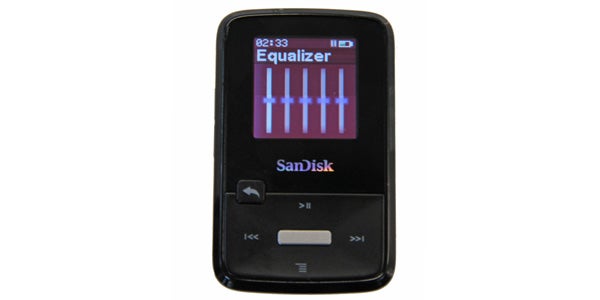 The SanDisk Clip Zip is a good budget choice for audio nuts, though, because of its support for the lossless FLAC format. Not all similar players from the big names – Sony, Apple, Samsung – offer it. However, while wide-ranging, format support is temperamental, with some files causing the player to hang.

A little patience is required, but the number of features SanDisk has packed into such an affordable player is impressive. It’s small, its storage potential is impressive and although the interface isn’t flashy, it is easy to use. Similarly-equipped music players from better-known names tend to cost at least £20-30 more.

There is one issue that turns us off the Clip Zip a little, though – battery life. At 12 hours, it’s a lot lower than the current standard. They may be a little larger, but the Philips GoGear ViBE, Apple iPod nano and Samsung YP-Q3 all double that figure to around 24 hours.

This limitation and the unimpressive screen make the SanDisk Clip Zip work best as a second, or perhaps sport, music player rather than your prime music source. The low price makes this work as a proposition, though, especially as you can snag the cheaper 4GB model and make up the difference in storage with a microSD card for a few pounds.

Verdict
Low cost, good format support and expandable memory team up to make the SanDisk Clip Zip MP3 player a solid choice if you’re strapped for cash. It doesn’t look or feel expensive, but its rear clip is sturdy enough to grip onto clothing reliably. Looking for a primary MP3 player? We’d recommend considering a slightly more expensive player with longer battery life. But as a second or sporty music source, it’s a winner.