The Sony NWZ range offers some of the best non-Apple MP3 players around, but its names do Sony no favours. NWZ-A865 and NWZ-S675 are about as memorable as the titles for various shades of grey on a paint chart. It’s hard to get too excited about an MP3 player called the Sony NWZ-B173, but it has features that make it worth remembering, especially for sporty types. 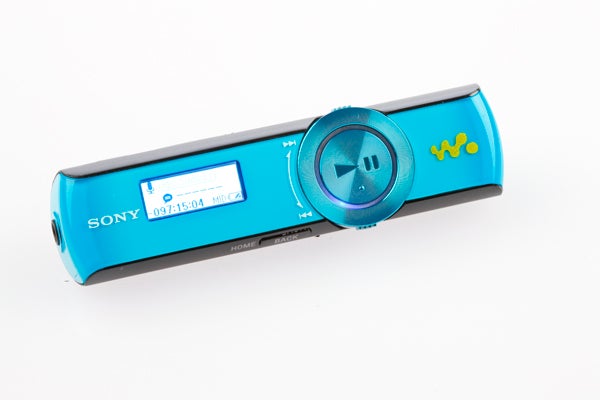 Design
The Sony NWZ-B173 is a slightly higher-end looking alternative to the B162, reviewed last year. But the basics are the same. It’s roughly the size of a cigarette lighter elongated by a centimetre or two and one end pops off to reveal a full-size USB socket. Jam this into your PC and you can drag ‘n’ drop music files, and charge the internal battery. Sony has sensibly made the end cap fairly resistant to being pulled off,
but losing the thing remains one of the top concerns with this little
27g musical stick.

A key feature of the NWZ-B173 is that it’s calibrated to charge very quickly at the outset, giving around 90 minutes’ use off a three minute charge. We got more than an hour’s play after a sub-5min charge, starting from a completely empty battery, confirming these claims.

Its charge-and-go style makes the device an obvious choice for one key group – runners. Never again will you have to put off a jog for a half-hour while you wait for your iPod to charge. The baton-like shape is also perfect for runners or gym folk. Its edges are curved, making it comfortable to hold, and it fits snugly into your grip – a full fist’s worth. 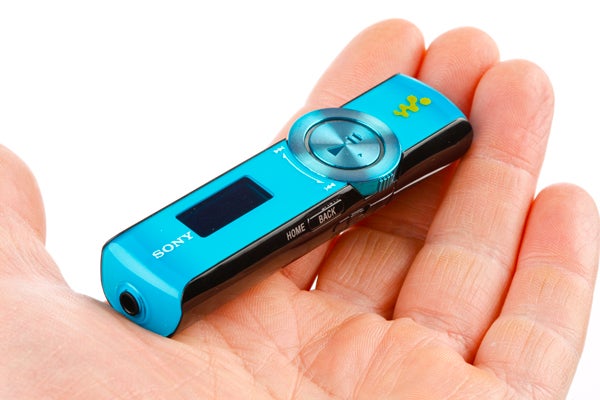 The 3.5mm headphone jack sits on the cap-less end, so it won’t get in the way in this scenario either. You do need to readjust your grip to change tracks, though.

Controls
Fast-forwarding and skipping tunes is handled by a wheel that sits just before the removable cap. It sticks out from the sides of the body a little, and is ridged to make operating it blind a cinch. The play-pause button sits in the middle of this wheel, and it once again thinks about people not needing their eyes, with a little dimple protrusion on top. 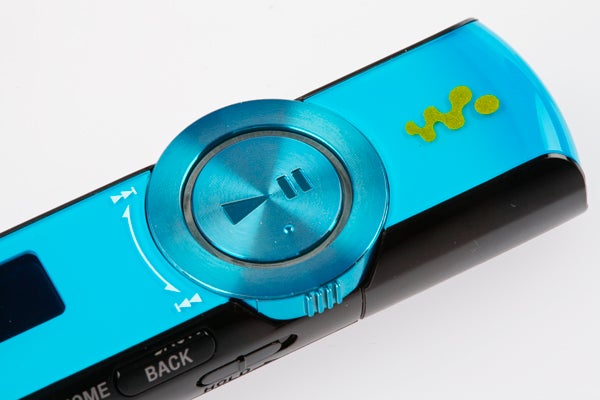 It works fairly well, and the track-change wheel feels strong enough, but depending on which part of the menu you’re in, it can feel as though you’re pressing the counter-intuitive direction. That’s the problem with using a more context-sensitive approach like this, rather than buttons with dedicated functions.

Also on the body are volume controls, a button that controls the bass boost and Zappin function – more on that later – a voice recorder button, menu key and hold slider. On its bottom are holes to fit a lanyard and belt blip. Once again – good for sporty types. 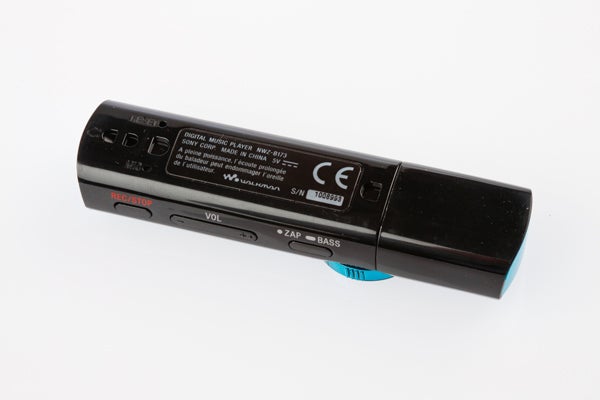 The Sony NWZ-B173 isn’t a big step forward functionality-wise compared to the other NWZ players we’ve reviewed in the past 12 months, but it does feel and look a good deal better. The colour finish along its front looks a cut above most budget players, with a translucent top layer that adds the appearance depth to the surface, and the superior styling puts the slightly cheaper NWZ-B162 to shame.

Features
Several features that will be important to many are still missing, though. There’s no FM radio, memory is non-expandable and format support is pretty poor – missing out on things like OGG, FLAC and other such audio nut faves. The one non music-related extra is voice recording, which uses the mic on the back. Tap the voice recorder button and it’ll take you instantly to the voice recorder section, which dumps files to a separate folder within the internal memory. 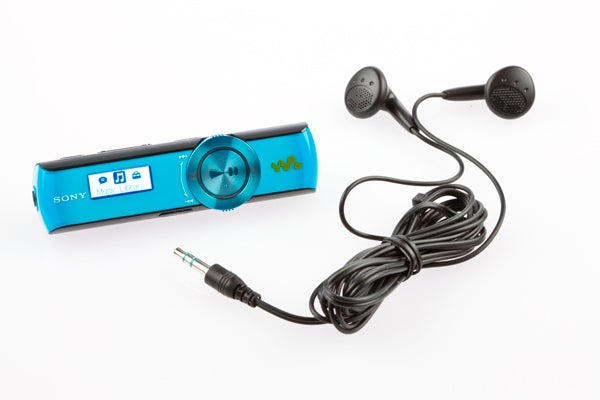 There’s 4GB of internal memory, which is enough for thirty or so albums encoded at decent quality. But if you want greater flexibility, the Sandisk Sansa Clip Zip 4GB edition costs around the same – and can hack lossless files, has a radio and expandable memory. However, the Sony offers 10 hours more battery life off a charge – 18, rather than eight. Along with the player itself, the NWZ-B173 comes with a pair of non-isolating earbuds – very basic fare.

Display and Interface
The Sony NWZ-B173 has a tiny 3-line monochrome display, used to relay the MP3 player’s interface and all track information. Although very small, its bright, light blue backlight makes reading text off it fairly easy.

Menu systems don’t get much more minimal than the NWZ-B173’s. Its top layer consists of three little icons. One represents voice recordings made using the pinhole mic on the back, the next your music library and the third takes you to the settings menu.

Navigation through your tunes is bog-standard, breaking down into albums, artists and so on, but it’s here that the circular nav wheel displays its oddest behaviour. You’d expect that turning the thing right – which skips to the next track in playback – would take you down the menu list, but instead it takes you up. If there’s a reason why, we’re not sure what it is. And it takes a bit of getting used to.

While playing tracks, the Sony NWZ-B173 predictably doesn’t show any album artwork, but it does show basic Tag info – artist and track/album name. Long track info scrolls across the display, as you can only fit so much on a 1in screen.

Zappin
The NWZ-B173 features the Zappin mode, a Sony-branded take on the traditional shuffle function. It’s a mainstay of Sony’s MP3 players. There’s a button on the player’s body that operates this and the bass boost function.

Zappin plays either a short 3 second clip, or longer 15-sec clip, of tracks before skipping to another. Find one you like and you can tap the Zappin button once more to stop shuffling and play the song in its entirety.

It’s a neat idea, but we’ve always been put off by the unnecessary sound effects that accompany the mode – an American woman saying “Zappin”, then an annoying whoosh sound, which returns each time the track changes. However, Sony has given the mode less prominence in this model – the NWZ-B162 had its very own Zap button, front and centre.

Sound Quality and EQ
The Sony NWZ-B173 has impressively powerful audio output for a small player. Maximum volume is very high, and even with over ears headphones that would benefit from a headphone amp, we could get a decent sound level at 50 percent volume.

Output is noise-free too, which is more than we can say of some “audiophile” players. However, as you might expect of a mainstream player, some of its EQ options are less than tasteful. To engage the bass boost, you simply need to give the Zappin button a long press. But we wouldn’t advise doing so. Even with normally bass-light headphones, it turns sound into a muddy, boomy mess. It has far too great an influence over sound.

There’s also a slightly higher-fidelity EQ section. Within the settings menu there’s a 5-band equaliser, each with up to 3/-3 settings. Any extreme changes tend to bring unsightly results – and the four preset options all disfigure the sound their own way. But there’s also a custom option you can maul to your heart’s content. In short – the EQ is best left alone if you have decent earphones or headphones, as is the bass boost.

Value
If value is your primary concern, you can get more player for your money elsewhere. SanDisk’s Clip players do more, with a radio tuner and expandable memory. However, the runner-friendly design – thanks to its easy, quick charging and ergonomic curves – make this the superior model if you don’t want to clip a player to your clothing.

The Sony NWZ-B173 is latest stick MP3 player from the MP3 player veteran. If you want the most features and the most flexibility, you won’t find it here. There’s no radio, limited format support and a very basic, teeny display. What it does have, though, is convenience.  With an integrated USB socket and decent 18hr battery life, it’s a great casual player if you need a player to use while running. And while it’s similar to its predecessors, it looks and feels less cheap.