The roaring, grumbling voice of Benedict Cumberbatch as the great dragon Smaug is something I really want to experience on a great home-cinema setup.

It says something about the quality of the audio on the iPad Pro then that I happily sat through a number of blockbusters listening to the built-in speakers.

The iPad Pro includes four stereo speakers. Bass and higher frequencies adjust according to the position in which the device is held. All four speakers pump out bass, but only the top two – depending on how you hold it – produce mid and high. All this leads to a surprisingly balanced audio experience and stereo separation that I’m totally unaccustomed to on a tablet. 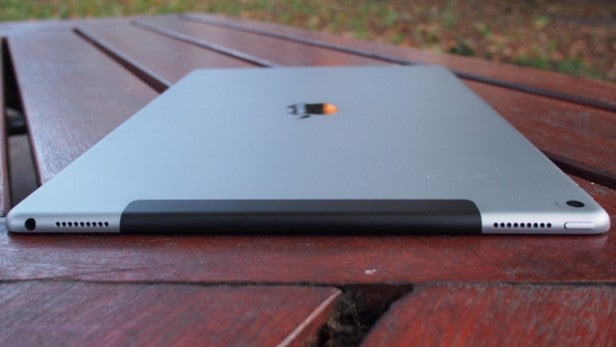 I’m not a fan of listening to music from most tablet speakers; the lack of bass and detail combined with shrillness grate on my ears within seconds. On the iPad Pro, however, I actually found myself enjoying a few tunes. In fact, these speakers are better than those I’ve encountered on many laptops over the years.

Sound is solid at top volume too. Apple claims the iPad Pro is three times louder than the iPad Air 2 – and I can believe it. It isn’t deafening, but you can happily watch a movie or listen to some tunes with a bunch of friends in the room.

Apple has designed a third-generation 64-bit processor for the iPad Pro and it’s speedy.

Unlike the iPad Air 2, which uses a tri-core array, the A9X chip on the iPad Pro is dual-core – but don’t let that worry you. Apple claims the iPad Pro is twice as powerful as the iPad Air 2 when it comes to CPU and graphical performance, although our benchmark tests show it to be closer to a 40% improvement.

Running at 2.26GHz and supported by 4GB of RAM, the A9X provides blistering performance. In fact, with a Geekbench 3 multi-core score of 5,523, the iPad Pro is comparable to the entry-level MacBook and i5-toting Microsoft Surface Pro 3.

Gaming performance is solid, too, with a 3DMark: Ice Storm Unlimited score of 33,483. This can’t compete with the Intel Iris graphics in the Microsoft Surface Pro 3 and Surface Pro 4, but  benchmarks are only part of the story. That’s because iOS games are designed with Apple’s hardware in mind, and are optimised for it. 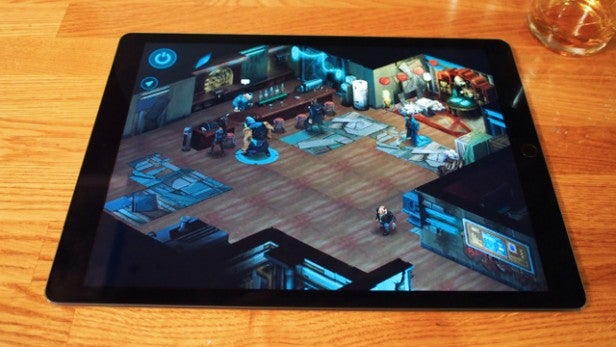 Shadowrun Returns is a luscious RPG that struggles on my iPad mini 2, but runs like a dream on the iPad Pro. Water, explosions and lighting effects look great on the huge screen – this is a great tablet for gaming – especially when combined with a Bluetooth controller so you’re not having to hold the device all the time.

Aside from gaming, Apple touts the iPad Pro’s productivity chops as some of the best around – and it’s right to boast.

Editing 4K video is a resource-intensive task on any machine, but the Pro doesn’t skip a beat cutting, transitioning and layering video on the fly. Since the iPad Pro’s cameras don’t shoot in 4K, you’ll need to get your 4K content onto it before you can tinker. I used an iPhone 6S Plus with iCloud backup. 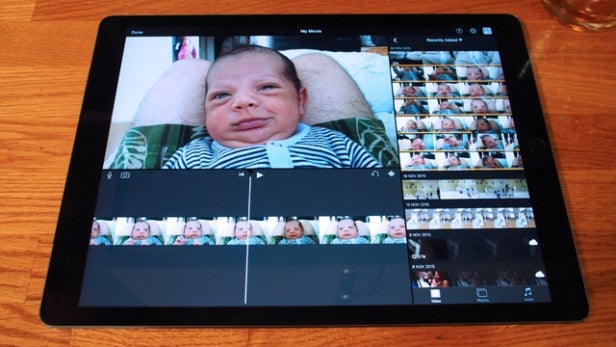 Image editing is similarly impressive, with changes appearing instantly in the new range of Adobe apps.

The iPad Pro is incredibly fast for a tablet and the high level of performance is all the more admirable considering how cool it stays under stress. At no point have I found it becoming even warm following an hour of gaming, let alone hot.