I’ve already mentioned that the iPad Pro comes with Touch ID. This lets you securely lock and unlock the device using your fingerprints, and it’s brilliantly slick and fast.

There’s the usual range of wireless connectivity, with dual-band Wi-Fi, Bluetooth 4.0 and NFC. If you opt for the cellular model, you’ll also get 4G. Add to these the Lightning port for connecting to a computer and that’s your lot. 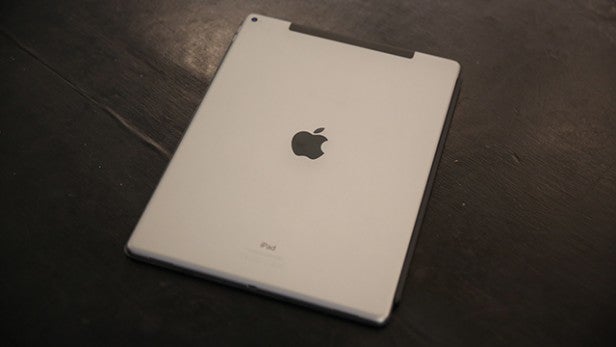 For a device aimed at the professional or semi-professional market, this level of connectivity may fall short. The Microsoft Surface Pro 4 is hardly brimming with physical ports, but the addition of a full-sized USB 3.0 port makes it far more adaptable. Whether this is for checking the contents of a USB stick, or simply pulling a load of photos off an SD card using an adapter. The microSD card slot also allows for plenty of extra storage, and easy data transfer, on the cheap.

A Lightning to SD card reader for the iPad Pro is available from Apple, but you’ll need to pay a premium for it. The same goes for storage.

The iPad Pro comes in 32GB and 128GB versions. 32GB won’t be sufficient for those wanting to use the tablet as a video- or photo-editing tool; 128GB should be enough for most.

There have been a whole host of improvements to iOS with this iteration, but I won’t cover everything here. For greater detail on all that’s new, head over to our iOS 9 review.

I’m going to focus here on the elements of iOS 9 that have the biggest impact on the iPad Pro.

Split View multitasking is the most obvious.

The large screen of the iPad Pro lends itself to having multiple apps open at once. For example, you can put together a beautiful presentation using Keynote while at the same time pulling images from a Safari browser window, but without having to switch from one app to the other. Or, you can work on an essay while also keeping an eye on your Twitter feed. 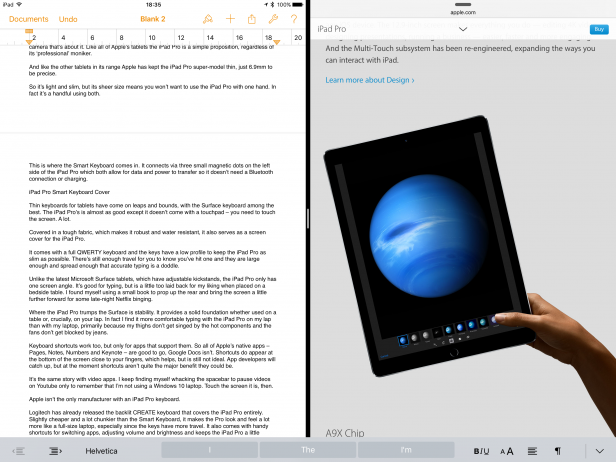 It’s a great feature, and one that adds credibility to the iPad Pro as a work device. However, Apple could have gone further.

The screen is big enough to have three, or even four apps running side-by-side, but this isn’t possible. In addition, not all apps will work side by side. For example, Facebook doesn’t work with Split View, and neither do video-streaming apps such as Amazon Video. For these you can use Slide Over.

Slide Over lets you, well, slide compatible apps over the app you’re currently using. So if you want to send a quick email or Skype message, but don’t want to interrupt the latest episode of Gotham, you can. Well you can if you’re watching content from the iTunes Store, that is. 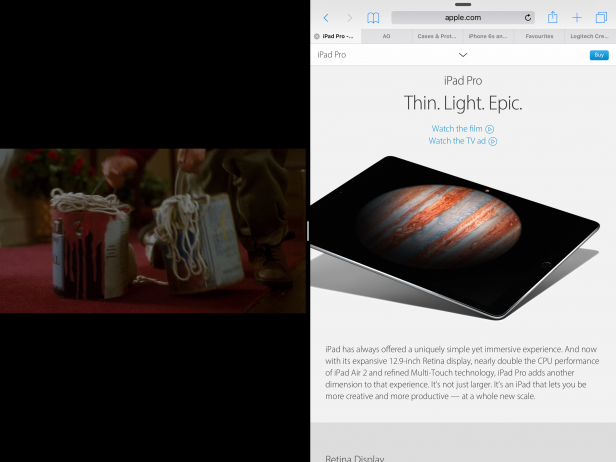 While Slide Over allows you to keep the app open, it greys over and video apps such as YouTube will pause what they’re playing. Still, it’s a useful feature that will allow you to deal with a quick task without it becoming a total distraction to whatever else you’re doing on the iPad Pro.

I’ve also encountered a few issues with some apps. While Spotify, Adobe Fix and the App Store opened fine, none showed any on-board content. A simple restart fixed the issue in the latter two, but Spotify still refuses to play ball. Spotify is aware of the issue, though, and is working on a fix.

I’m sure these problems will be short-lived as app developers release iPad Pro updates, but it’s currently an annoyance. Note that out of the 40-odd apps I’ve tested, only three had issues, and only Spotify didn’t work at all.

The only other disappointment of iOS 9 on the iPad Pro is the lack of any changes to make the most of the big screen. The number of app icons on the homescreens remains the same as any other iPad, and you can still pin only five apps to the quick-launch bar. It’s a wasted opportunity.