The iPad Pro 2018 is powered by the A12X Bionic chipset, and in benchmark tests this equates to this device being the most powerful tablet we’ve ever reviewed. The iPad Pro 2018 also comfortably beats the best smartphones out there for performance.

Along with the A12X Bionic is 4/6GB RAM and storage options ranging from 64GB to 1TB. If you want that extra 2GB of RAM then you’ll have to plump for the biggest storage option. I can’t imagine anyone spending this much on a tablet and being happy with 64GB – but hey, I guess it allows Apple to offer a “lower” starting price. The 256GB allowance would appear to be the perfect option for most people. 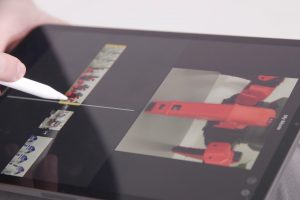 All that power and those ridiculous benchmark scores are one thing, but it’s real-world performance that matters. To test this out, I performed a couple of “intensive” tasks. I loaded multiple RAW photos into Lightroom, put some 4K footage into iMovie, and tried my best to draw a multi-layered picture in ProCreate. Each task worked perfectly well, without any lag or serious slow-down.

iMovie for iPad is surprisingly fully featured, and I managed to edit down my footage into something resembling a viewable video. Lightroom had no issues opening, allowing me to edit and then saving edited RAW photos to the cloud. It loaded up the images in roughly the same amount of time as my MacBook Pro.

It’s with ProCreate and “creative” processes that the iPad really shines, though. Interacting directly with the screen via the Apple Pencil feels responsive and natural; this is something that’ just isn’t possible on a Mac.

During the unveiling of the iPad Pro 2018, Apple claimed it matched the Xbox One S in terms of gaming power. That might be the case, but that comparison is pretty irrelevant. There are some good, even great, games on the App Store: PUBG Mobile, FM 2019 Touch, Asphalt 9 all load up and run exceptionally well. There’s nothing here of real console quality, though. 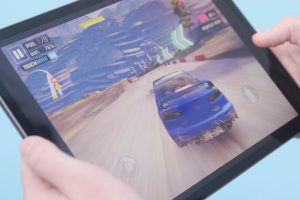 Even with the lack of a headphone jack, the audio on the iPad Pro 2018 is great. There are four speakers on the device – two at the top and two at the bottom – and these each consist of their own tweeter and woofer. Sound is loud and clear, with a surprising level of bass and virtually no distortion, even at full volume. The speakers are clever, too: spin the iPad around and the audio will follow you.

Apple is selling a USB-C to 3.5m adapter alongside the new iPad; it isn’t included in the box. You can also use compatible USB-C headphones – I tried the Pixel Buds you get with the Google Pixel 3, which sound as expected.

The rear camera of the iPad Pro 2018 takes plenty of inspiration from the iPhone XR. It’s a 12-megapixel sensor with an f/1.8 lens and Smart HDR. 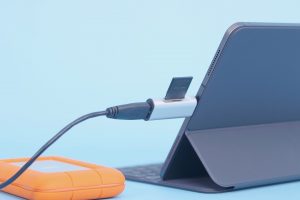 Look deeper at the specs and you’ll discover that not only is the camera a downgrade on the XR – which is to be expected, to be honest – but it’s also a downgrade on unit featured on the last-gen iPad Pro.

There are now fewer elements inside the lens and OIS (optical image stabilisation) has been ditched. You’ll notice the lack of stabilisation in video recording with footage looking shaky.

Photos are fine, however, especially for a tablet. Images display bright colours, plenty of detail and the sensor is quick to focus, too. Mainly for use with AR tasks and photographing documents, for such purposes the camera really impresses.

The most significant thing to hold back the iPad Pro 2018 from becoming not only the ultimate tablet but the ultimate laptop, too, is iOS 12. This is pretty much the same software you’ll find on the £329 iPad, and it stifles the potential of the hardware.

Take the USB-C port, for example. While you can use it to reverse-charge other devices such as the iPhone and Apple Watches and to import photos from an SD card, you can only import those photos into a Camera Roll of the Photos app. If you’re a Lightroom user, you’ll have to first import snaps to Photos and then again into your Lightroom library. When you’re trying to work fast, this is severely limiting.

Neither can you use that USB-C port to plug in an external hard-drive. Again, there’s no reason you shouldn’t be able to do that.

iOS 12 is a fantastic operating system on cheaper iPads used mainly for media consumption devices and iPhones. Here, however, it serves to stunt productivity. You have all this power and amazing hardware to play with, yet you can use only two apps concurrently, and neither of these can be turned into floating windows.

The lack of a proper file structure also limits functionality. Apple’s Files app is fine, but I want something more akin to Finder on a Mac, where all my files can be stored and accessed from anywhere. There are simply too many hoops to jump through to get things done here. 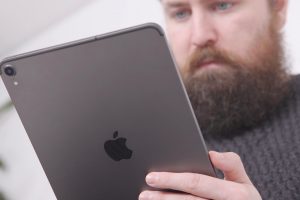 Where the iPad’s software impresses slightly more is in terms of the apps. The iOS App Store features plenty of custom-built apps for the iPad, including productivity apps such as iMovie, Lightroom, ProCreate and Affinity Photo. They’ll be a Photoshop app coming in 2019.

These remain cut-down desktop versions, although each feels good on the touchscreen and offer a decent selection of features. I’d still like more, though; and again – having all this power without fully featured apps feels like a waste.

Some of those apps – iMovie, for instance – can output 4K (or 5K) via a USB-C cable to a television or monitor and display something different. This is something that needs to be added to an app by the developer, or else you’ll just get a mirrored image of whatever you see on the iPad on the TV.

Face ID replaces Touch ID as the main biometric method of unlocking and authenticating payments with the iPad Pro 2018. You’ll be prompted to engage this feature on initial setup of the iPad. 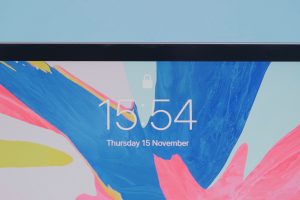 The process is identical to that on the iPhone XS. You swivel your head a few times and then, voila, you’re done. Face ID is fast, accurate and works in various orientations. If you’re accidentally covering the camera, you’ll get a handy alert to move your hand.

Both sizes of the iPad Pro 2018 have slightly different battery capacities. The 11-inch model has a 29.37Whr cell, with the 12.9-inch upping that to 36.71Whr. That difference is mainly to offset the larger screen and the extra power the latter model requires. Apple claims 10 hours of “web browsing, watching video or listening to music”.

I’ve been using the 11-inch model for this review and the battery life stands up to, and often exceeds, Apple claims. It also matches up to just about every recent iPad, including the 9.7-inch iPad and iPad Pro 10.5.

An hour of streaming an HDR video from Netflix consumed between 7-10%, with an HDR movie from iTunes (downloaded to the device) taking off 6-7%. These were with brightness set to roughly half and Wi-Fi on. You’ll of course get more (or less) juice by altering the brightness, but I found 50% was bright enough for me. 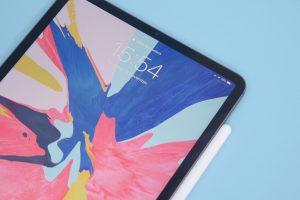 If you use the device sparingly, for a few hours each day, you could go multiple days without needing to charge the iPad Pro 2018.

There’s no wireless charging here, with the USB-C port the only means of powering up the iPad Pro 2018. In the box, you get an 18W USB-C to USB-C charger However, if you’ve got a recent USB-C MacBook or laptop then you can use that charger instead to enable faster charge.

There’s plenty to like about the iPad Pro 2018. It’s a gorgeous piece of design headlined by a beautiful display and hardware that’s unmatched.

Yet for the potential of this tablet to be fully realised, iOS needs to grow up. There are too many limitations, too many roadblocks to completing tasks in a streamlined way. Don’t get me wrong, you can be super-productive with this device, but it takes more effort than it should.

If you can afford it – and you know what you’re getting into – and the iPad Pro fits into your workflow, it’s an exceptional device; one that will certainly impress.

A stunningly built tablet that needs a better operating system to really make the most of all the power contained within.