Sold alongside the iPad Pro 2018 are a few accessories. If you’re attempting to replace your laptop with this tablet then the Smart Keyboard Folio should be your first addition. It offers a slight update on the previous Smart Keyboard, with a renewed design but the same fabric-covered keys.

Typing on the Smart Keyboard is a pleasant experience, once you get used to the minimal travel, and it folds away into a compact package once you’re done. 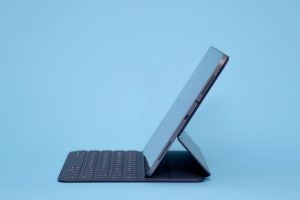 Unlike the previous version, it no longer suffers an unsightly bulge on the front – and it now covers the back of the iPad, too, attaching via magnets. It fits into place with a satisfying click, unlikely to come off when the device is in your bag.

One minor irritation with the updated design is that with the keyboard folded away, but you continuing to use the tablet, the keys remain visible on the back. It’s a design oversight that feels very un-Apple.

The other, more obvious downside of the Smart Folio Keyboard is the price. It will set you back £179/$179 for the 11-inch version and £199/$199 for the 12.9-inch. That’s difficult to swallow, even for an Apple product. It might be worth waiting to see if Logitech launches a similar device, as the company did for the previous iPad.

The other headline accessory is the second-generation Apple Pencil (£129/$129). The updated version of the stylus has a matte body for improved grip and it now charges wirelessly on the side of the iPad – which also offers a home for the Pencil when it isn’t in use. 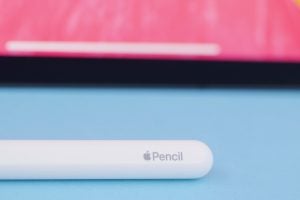 The area just above the tip of the Apple Pencil is now capacitive, so you can quickly double-tap to jump from your pen to an eraser without touching the screen. Third-party apps will include this functionality, too, so it isn’t restricted to only Apple’s software.

Apple’s Pencil remains an excellent stylus and the changes only serve to make it feel better in use. There’s virtually no lag when you’re drawing or writing, and the palm-rejection software means you can write naturally, leaning against the display without it registering any false interactions.

I’ve been using the 11-inch version of the iPad Pro throughout the review process and it’s the device I’d recommend for note-taking. The larger canvas of the iPad Pro 12.9-inch is much better for drawing.

The Apple Pencil’s pressure sensitivity remains the same. I did notice slightly more resistance against the screen when drawing, which results to mimic the feel of pen on paper a little more. That aside, the experience is virtually identical.

The previous Apple Pencil was powered up by removing its cap and attaching the device to the Lightning port to charge and sync. It was an odd process and one that left the Pencil hanging from the bottom of the iPad whilst it was charging. 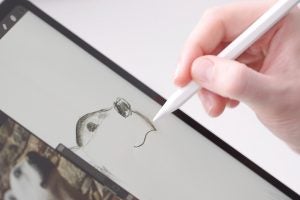 The new magnetic method handles both charging and syncing, and in my experience it does so reliably. There were a couple of occasions where on removing the Pencil it failed to connect instantly, but these were rare. What I found more common was that the Pencil would run out of battery very quickly if it became dislodged from the iPad.

If you’re upgrading from the an older iPad Pro and hoping to save some cash by holding on to your old Pencil then prepare to be disappointed. This iPad Pro only works with the new,  second-generation Pencil; the older Pencil doesn’t work at all.

In addition, I understand that there’s no Lightning port to charge it here – come on, Apple; this is disappointing when you consider how much it costs.