The iPad mini 3 has exactly the same processor as the iPad mini 2 and iPhone 5S – a 64-bit A7 dual-core processor with 1GB of RAM. The cores run at 1.3GHz, as opposed to the iPad Air 2’s tri-core 1.5GHz, and a quad-core GPU provides plenty of grunt for 3D gaming.

Even though it’s a year old, it’s still a very competent processor. The iPad mini 3 zips through menus on iOS 8 and apps open with speed. Games look fantastic, particularly those made with the 64-bit architecture in mind, such as Infinity Blade 3.

As expected, in our benchmark tests the iPad mini 2 scores almost exactly the same as its predecessor. It scored 2550 on Geekbench 3 and 14,009 on 3D Mark Ice Storm Unlimited – both decent scores, but less than the Snapdragon 801 or 805 that most top Android tablets have. It’s also a lot less than the Nvidia Shield Tablet can muster. That scores 3209 on Geekbench 3 and a whopping 29,206 on Ice Storm Unlimited. That’s more than double the gaming performance for a lot less cash.

However, the iPad mini 3, like the mini 2 before it, performs well and should still do so for a few years to come. 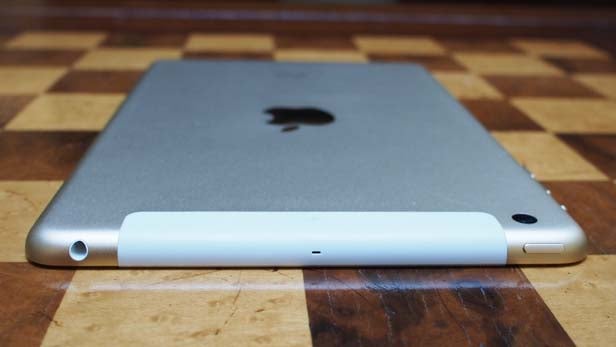 The 4G antenna is hidden behind a plastic panel

Surprise surprise, the iPad mini 3 comes with the same connectivity options as the iPad mini 2. There’s Bluetooth 4.0, solid Wi-Fi (but not 802.11ac), AirDrop and AirPlay. The Lightning port lets you charge the iPad, sync and transfer data via iTunes. You can opt for a 4G model, too, although you’ll need to pay extra.

There’s no microSD card slot, so you’ll need to stump up for your required storage right from the start, with the options being 16GB, 64GB and 128GB. That’s one of the few differences between it and the iPad mini 2, which is now only available in 16GB and 32GB flavours.

iOS 8 contains a bevy of new features for you to enjoy. Most of the kinks have been ironed out with the 8.1 update, and in all it’s a win for Apple. We’ve spent a long time tinkering with iOS 8 – here are the highlights:

Keyboards
The standard Apple keyboard now includes predictive text, but more interesting is the fact that you can add your favourite keyboard from the App Store for the first time.

Widgets
You can now add widgets to iOS 8, but don’t expect the all-singing, all-dancing Android ones. On the iPad mini 3 widgets are restricted to the Notification Center. Still, it’s a welcome addition.

Interactive Notifications
You no longer need to jump out of an app to deal with a text message. Interactive notifications let you respond without closing your current app.

Family Sharing
You can now set up unique Apple IDs for other members of your household, allowing them to use your iPad mini 3 with some restrictions. You can set up approval requests so that children can’t rack up in-app purchases, while music, ibooks and movies can all be shared with up to six other Apple IDs.

Continuity
The pick of the changes is Continuity, although it also requires you to have bought into more of Apple’s ecosystem. It lets you answer an incoming call on your iPad mini 3 or Mac computer (OS X Yosemite only) if your iPhone is on the same Wi-Fi network. It also lets you use Hand-off. This is a useful feature that means you can seamlessly work on a project from one device to another.

For an in-depth look at Apple’s new operating system, read our iOS 8 review.

There’s one final thing to consider with iOS, and that’s the App Store. Apple’s spent years cultivating the best app marketplace bar none. With more than 675,000 apps optimised for iPads, there’s something for everyone and it lifts the iPads above the competiton.