What is OS X Yosemite?

OS X Yosemite aims to tie Macs, iPhones and iPads, like one big happy Apple family. The Cupertino-based company has had many of the ingredients in recent years, but OS X Yosemite completes the recipe and gives it a darn thorough cooking. Missing elements, such as AirDrop support across iOS 8 devices and Macs, have been introduced, as well as numerous new features – many of which we’ve also covered in our iOS 8 review.

Indeed, with added functionality such as the ability to make and take calls from your iPhone from your Mac, and the addition of iCloud Drive, this is a larger update than last year’s Mavericks. And remember, Yosemite is free.

But despite all that, the thing most people will notice is how it looks. 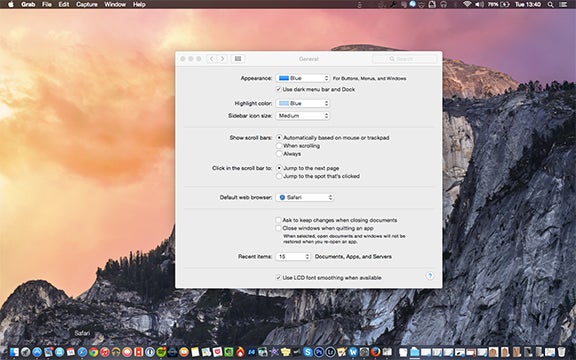 We assume Apple simply ran out of time with Yosemite’s predecessor, Mavericks. While iOS 7 introduced a refreshingly new, Ive-inspired look, Mavericks was more of a tinker under the bonnet – an oil change rather than a full service. Yosemite catches up and the lineage is obvious. It adopts the same ‘flatter’ appearance, simplifies and adds generous lashings of transparency.

The effect varies from app to app, but the basic idea is OS X Yosemite takes the colour of your desktop background (or webpage in Safari) and reflects that within the window you’re viewing. It’s not transparent in a ‘see-through’ way; it takes the colour and makes it diffuse – the nearest real-world reference is that it’s like looking through frosted glass. This kind of change inevitably raises concerns about usability, but they’re largely unfounded. We’ve had no problems with unclear actions or interface elements arising from this.

The transparency effects and a change in font, the same one as in iOS 8, give OS X Yosemite a much-needed freshness. It’s also brighter. Yosemite adopts a similar colour palette to that introduced in iOS 7 – a fact reflected in app icons and even folders.

We also like the many ways Yosemite tightens things up and uses space more efficiently. The best example is how many title bars (not all) are now removed. The traffic-light buttons – the three ones in the top left of every window – are still there, but they sit along proper interface elements, making use of space previously wasted. This means, for example, that the address bar in Safari is now on the same level as the traffic light buttons. It gives you a little more space and it looks cleaner and neater. 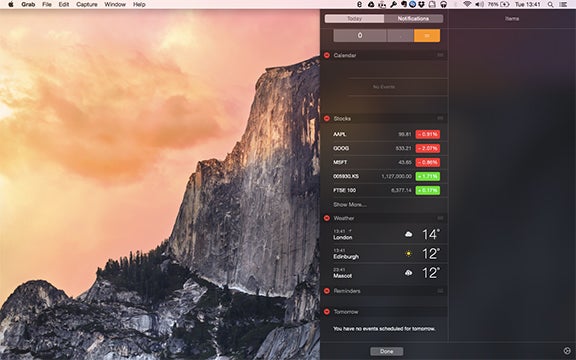 It’s not just the interface that has a strong iOS influence; many features are lifted wholesale from iOS. The best example is the Notifications Center. which looks, feels and works just as it does in iOS 8. This includes support for third-party extensions and widgets, plus the ability to replace and remove the default ones with those of your choosing. Third-party support is patchy at present, but it’s bound to pick up – it already has on iOS 8. There’s still no ‘clear all’ option notifications, though.

Yosemite also picks up the third-party extensions support added to iOS 8. Third-party extensions work across the whole OS and fall into four categories: Actions (edit or view content in another), Finder (integrate with Spotlight search), Share Menu (share with other apps) and Today (widgets). They’re a useful addition, though we haven’t seen many examples yet – developers are only now starting to roll out Yosemite updates. Yosemite also adds Family Sharing, which makes it easier for parents to manage family accounts and share purchases, and iCloud Drive. 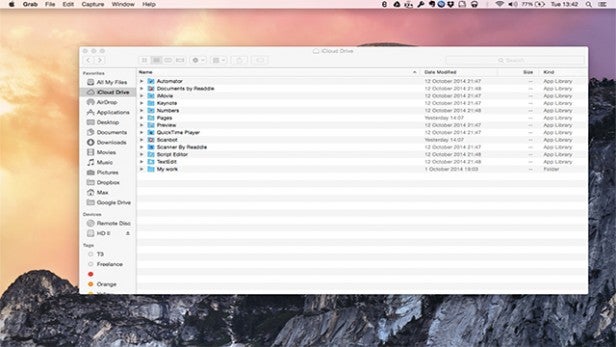 iCloud Drive is a belated admission that Apple’s previous iCloud system was too restrictive, even by Apple’s standards. Instead of files being cocooned within individual apps, iCloud Drive organises them into folders in much the same way Dropbox does. By default iCloud Drive apps have their own folders, but you can access them and open the files in any compatible app.

Other iOS inspirations are subtle, such as the way the address bar in Safari hides the full URL until it’s selected, in favour of the domain or – in the case of verified websites – the name. These kind of changes might upset purists, but there’s sense in them. Hiding the URL makes it harder for phishing sites to ‘spoof’ domain names, as they can’t hide the real domain with overly long and complex URLs. 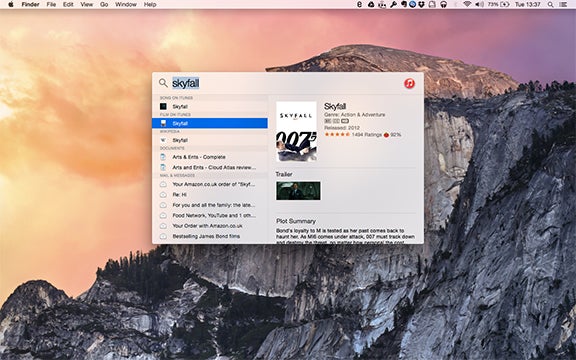 The final iOS-like flourish is a significant upgrade to Spotlight. Just as in iOS 8, it pulls in search information from numerous other sources (Maps, Wikipedia, iTunes, Bing etc.), but it’s also gained a new, larger preview window. The new window gives you previews of the results and organises your search results by category (i.e. Bing results and files on the Mac are separated) and it puts what it thinks is the most relevant result at the top. It’s a useful improvement and, just like iOS, it’s integrated into the search bar in Safari, too.

Next
Continuity, Handoff and Verdict Review