This laptop’s a curious one in the performance stakes.Laptop makers tend to choose Intel Core i Y-series processors (such as the Core i7-7Y75) for fanless laptops because these ultra low-power chips are made for short bursts of performance and low power consumption.

However, Huawei has done something that appears to be quite clever. It uses tiny pockets of gel that change from a solid to a liquid when they get hot for cooling. This means heat dissipates faster than on machines with more common vapour chamber cooling, in theory boosting performance.

In my model, powered by the Intel Core i5-7200U and 8GB of LPDDR3 memory, I was able to achieve some respectable GeekBench and PC Mark scores that put it some way ahead of the Acer Swift 3, the most recent laptop Trusted tested with the same processor. 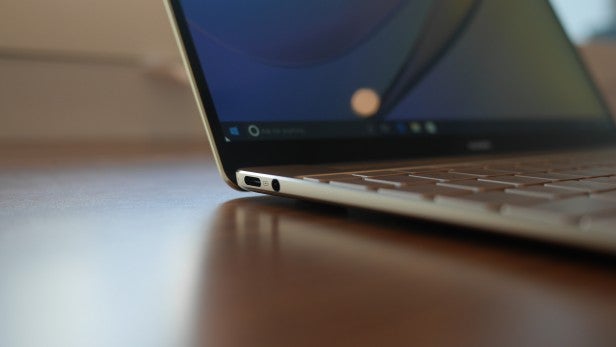 What I was initially concerned about was throttling, where the processor slows down from its (in this case) 3.1GHz maximum Turbo speed when it gets too warm. To see what it’d take to make this happen, I ran the ultra-tough CineBench R15 benchmark that stresses each processing core to the max. In an air-conditioned office environment, it took about three minutes of non-stop running for the chip to throttle back to 2.7GHz. In non-air-conditioned house on the hottest day of the year thus far it took around 45 seconds. But either way, it never dropped below its quoted maximum regular speed of 2.6GHz, which is impressive.

Despite that, I wouldn’t really recommend this laptop to anybody who’s going to be doing a lot of video or photo editing. But my tests at least prove it won’t bottle it when you do fancy a bit of multimedia work.

I was also concerned about external heat, and while the processor load doesn’t results in uncomfortable amounts of heat on the top or bottom of the machine, charging the battery does. While charging from the wall, the bottom of the laptop became too hot to touch comfortably. You wouldn’t want to charge this laptop while it’s sitting on your lap. Once it’s fully charged, the heat drops away significantly. 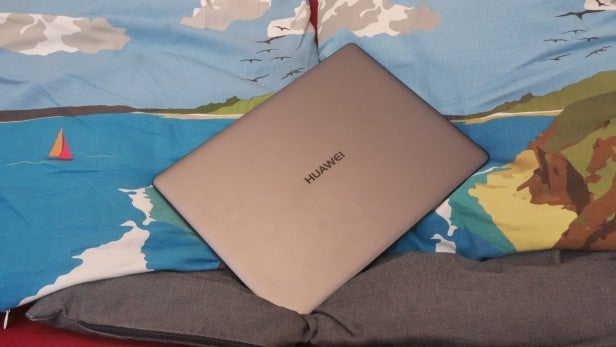 The 256GB NVMe-based PCIe SSD on this model reached a maximum read speed of 1520MB/s in the CrystalDiskMark test, which is the second-fastest Ultrabook result Trusted has recorded in the last year. In fact, it’s only beaten by the MacBook Pro, and even scrapes ahead of the excellent Dell XPS 13. That’ll really help with loading programs and large files.

Despite great performance, the MateBook X can last a full day off a single charge if you treat it right. I could get around six to seven hours out of it on a normal day without power saving and with the screen at half brightness. It’ll pay to carry the lightweight USB-C charger with you anyway.

In Trusted’s standard PowerMark benchmark, which is a uniform but slightly generous test, it managed 7 hours 45 minutes at 150 nits screen brightness. This is a couple of hours behind the Dell XPS 13 and Acer Swift 5, and an hour behind the  Lenovo IdeaPad 710S.

Should I buy the Huawei MateBook X?

If you are on the market for an Ultrabook and can find one to buy, the MateBook X is worth adding to your shortlist. It lacks the multimedia appeal of the fan-cooled Dell XPS 13, Razer Blade Stealth and Microsoft Surface Laptop, but up against the Asus ZenBook 3 it’s a really tight race.

With a great screen, silent running and thinner design, this is the new ultra-thin Windows laptop champ. I don’t yet have a UK price for it, but my inc-VAT estimations based on EU pricing puts it at around £1200 for this model, which is quite expensive no matter which way you look at it.

This isn’t a MacBook replacement, though. You’re limited by the oddities of Windows 10 and you won’t get the pleasures of MacOS, but if you’re OS-agnostic, the MateBook X feels like better value.

A niche, premium product with very few flaws, but you pay for it.