What is the Asus ZenBook 3?

The ZenBook 3 has redefined the Ultrabook, with the lightest and thinnest Intel Core i-powered laptop on the planet. However, as you might expect, the compromises that are made when you shrink a laptop down are notable, but certainly not deal-breakers.

Up against it is the 12-inch MacBook, which packs a lower-power processor but the promise of much better battery life and a better screen. 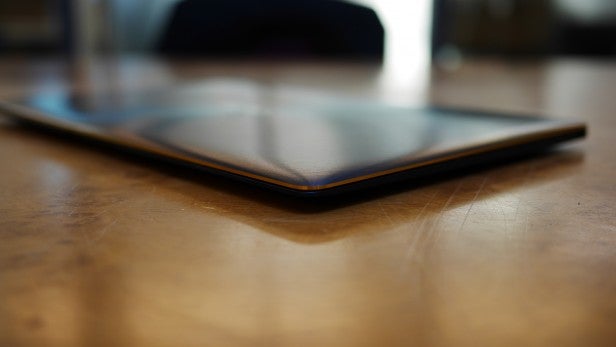 The ZenBook 3 is stunning. Weighing just 910g and just 12mm thick, this isn’t just portable; this is 12-inch MacBook territory. It’s better than the slightly larger HP Spectre 13 as well, with less of that over-the-top high-end styling and a greater focus on subtlety.

Asus couldn’t help but inject just a little, ahem, ‘class’ into the ZenBook 3, with this blue model getting gold highlights around its edges and gold-tinted keyboard backlighting. It won’t be for everyone, but the additions are subtle enough to feel stylish rather than ostentatious – something the HP Spectre didn’t quite manage.

There are other technical marvels at play here. The 12.5-inch screen is surrounded by a thin bezel that pulls your eyes into the screen. The additional benefit of this is a smaller footprint than you might expect from a laptop of this size. It’s the perfect antidote to the Razer Blade Stealth, which had an outrageous bezel surrounding its 12.5-inch panel.

While the ZenBook 3 looks great, it doesn’t feel quite as well built as one might want from an ultra-expensive laptop. The wrist rest has a little flex to it, which highlights its predominantly plastic construction. I’m not sure this sort of plastic has a place on a device this pricey.

Asus might have strayed too far into MacBook territory with its single USB-C 3.1 port. There are no dongles or adapters supplied in the box (US models appear to get a dongle while UK models do not, which is why you’ll see other reviews applauding the dongle’s presence). This means that, if you’re charging the machine, you’ll need a multi-adapter to connect any wired peripherals. These might not be as expensive as they once were, but it’s still very hard to forgive on an ultra-expensive laptop.

By comparison, the HP Spectre had three of these ports and came supplied with a USB-C-to-USB-A adapter in the box. 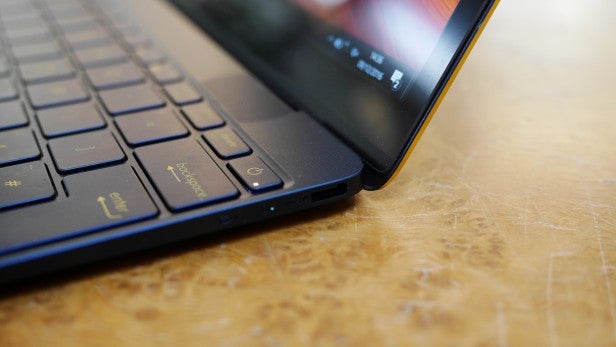 It’s rare to find a fingerprint scanner on a non-business laptop. We saw a couple of examples from Huawei and Asus earlier this year, Microsoft has launched its own fingerprint-friendly Surface Pro 4 keyboard, and, of course, there’s the MacBook Pro. But this technology is only just starting to appear on store shelves.

The good news is that, when it works, it works very well. Using Windows 10’s excellent Hello security platform, you simply touch your finger to the scanner and you’ll be at the desktop in a fraction of a second. There are problems, though… 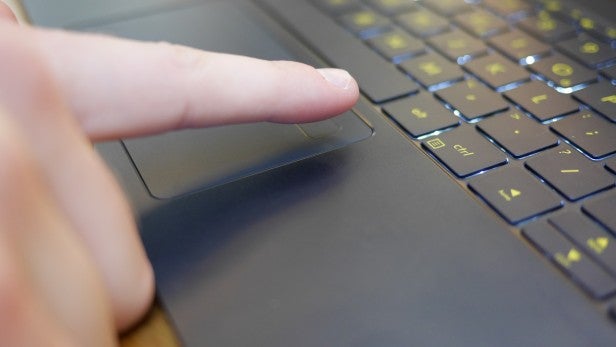 First, the placement of the scanner might not be ideal for some, sitting as it does in the top-right corner of the touchpad. During my time with the ZenBook 3 there were no occasions where I accidentally strayed onto the scanner, but someone with different touchpad habits might not be so lucky.

The second issue is the rather patchy drivers. Initially, the fingerprint scanner was overactive and constantly thought it was scanning a finger, immediately locking me out every time I woke the ZenBook 3 up. Signing in with a PIN is an alternative option, so I wasn’t stuck for long, but it was extremely irritating. Asus provided a driver update that fixed the problem, so if yours has the same issue, head to Asus’s support website to see if there are new drivers available. Even with newer drivers, Windows occasionally forgets the Fingerprint scanner exists, but doesn’t tell you, meaning you’ll have to log in with a PIN. 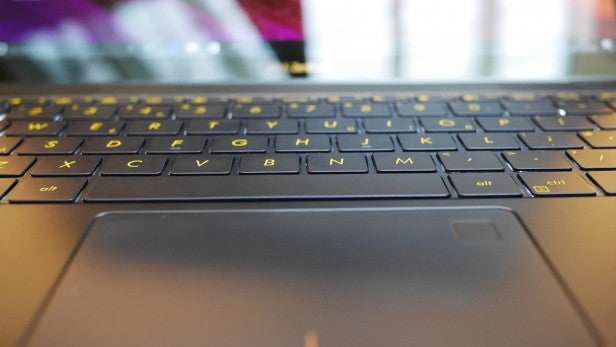 The inclusion of a fingerprint scanner is very welcome, but I hope there aren’t more problems further down the line for this nascent technology.

The touchpad is slightly odd as well. While it’s Microsoft Precision-certified and serves up an immediate response to gestures and taps, there’s something off about it. The main problem is the physical click, which is far too shallow. It meant I always ended up pressing too hard and it bottoming out too soon. I eventually gave up using the physical click altogether and resorted back to taps instead. 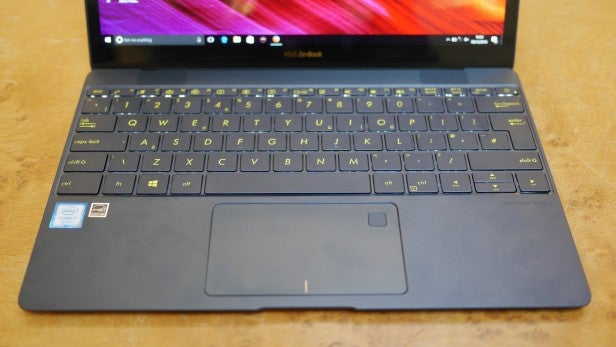 The keyboard is another curious beast. It’s nice and big, with large chiclet keys spread from edge to edge. They’re backlit, which is welcome, and there are no big misses in terms of layout or key size. However, it’s the physical key press that’s a little wanting. It’s again too shallow and without the clickiness of a MacBook-style Butterfly switch – it can introduce a vague feeling that results in an increased number of typos.

With its lovely thin bezels, the screen is the true centrepiece of the ZenBook 3. It’s a 12.5-inch display with a Full HD resolution. Its larger 13.3-inch rivals often opt for higher-res panels, but as I saw with the 12.5-inch panel on the Razer Blade Stealth, opting for anything more than Full HD at this size is a waste in Windows 10. Here, the Full HD panel is put to good use.

I measured its maximum brightness at 270 nits, which is actually a little lower than expected. It still looks great, though, with high contrast at 1161:1 and deep, 0.23-nit black levels. Colour coverage was a little down on expectations, with my measurements detecting just 85% of the sRGB colour gamut. This is middle-of-the-road for a laptop, and its key rival, the HP Spectre, is significantly better. 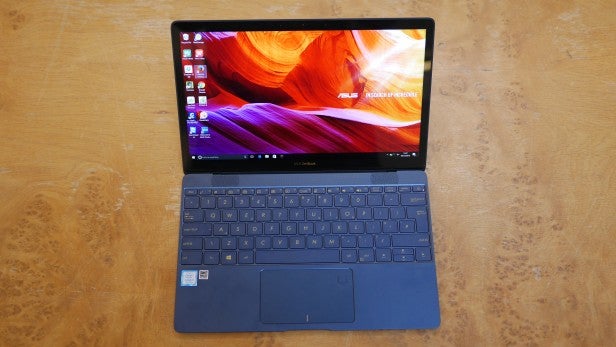 It’s a glossy screen but unlike many of its rivals, there’s no touch input. Some won’t mourn its loss, but it was always a nice-to-have feature for the occasional prod.

The webcam on the ZenBook 3 is one of the poorest examples I’ve seen in quite some time. It has an exceptionally narrow field of view, creates pretty blotchy images and makes even a decently lit room look dark and uninviting.

The microphone is fine and picked up my voice from a reasonable distance, but it delivers a pretty low-fidelity sound and won’t do anybody’s sultry tones justice.

The speakers are a highlight: music has some depth and dialogue is well served. The software-based audio enhancements do a decent job of artificially adding a little bass to drum beats, but not so much that it starts to sound silly. For such a thin laptop, they’re pretty great.

Used as our main laptop for the review period
Tested for at least a week
Used consistent benchmarks for fair comparisons with other laptops
Reviewed using respected industry benchmarks and real world use
Next
Performance, battery life and conclusion Review