What is the Acer Swift 3?

The Acer Swift 3 2017 is the latest revision of Acer’s budget 14-inch ultraportable laptop. It offers a potentially perfect balance between the sleek, slimness of premium Ultrabooks such as the Dell XPS 13 and chunkier, cheaper 15-inch laptops. 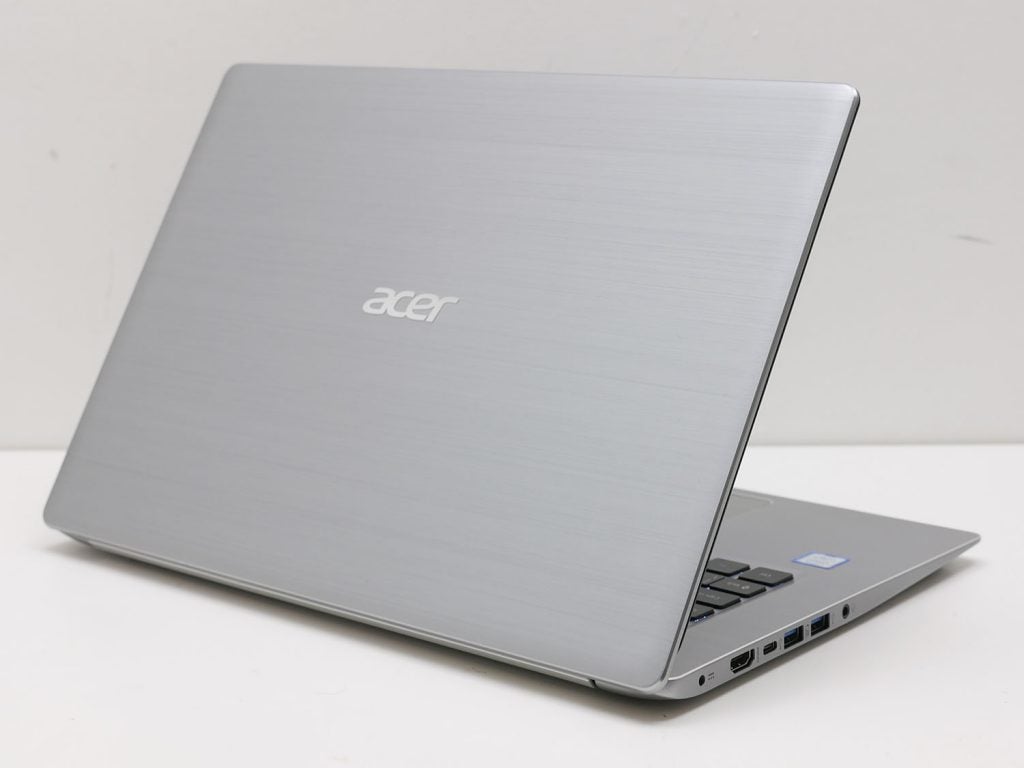 Like its predecessor, the new Swift 3’s biggest asset is its all-aluminium body. The screen lid, keyboard surround and base are all made of the metal and it looks great for it. Internally, it’s built around a plastic frame, so you don’t get the solid feel of a MacBook, but the effect is largely the same.

Less welcome, though, is the introduction of chamfered edges to the keyboard surround and touchpad. They look nice enough but are a little sharp to the touch.

Another change for the worse is the introduction of a glass front panel to the screen. It looks nice – and all the more MacBook-like – but, when compared to the matt

e plastic of the previous version, the glossy finish isn’t as welcome when it comes to reflection.

A nice touch is the single, unbroken strip of rubber that runs around the screen to protect it when closed. This looks much better than when you have individual blobs of rubber in each corner. 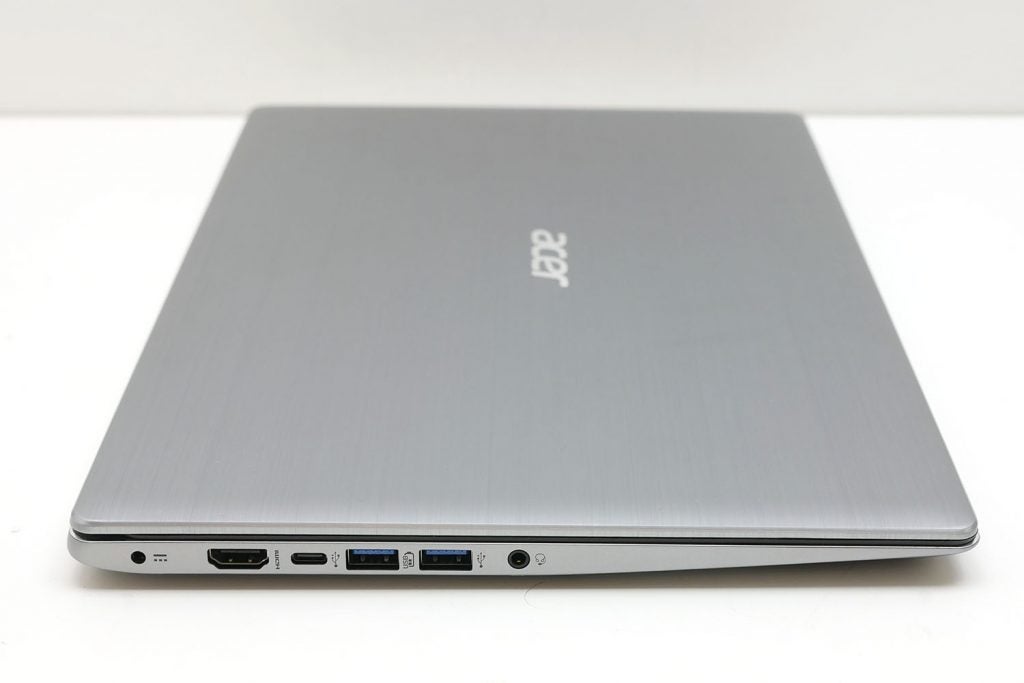 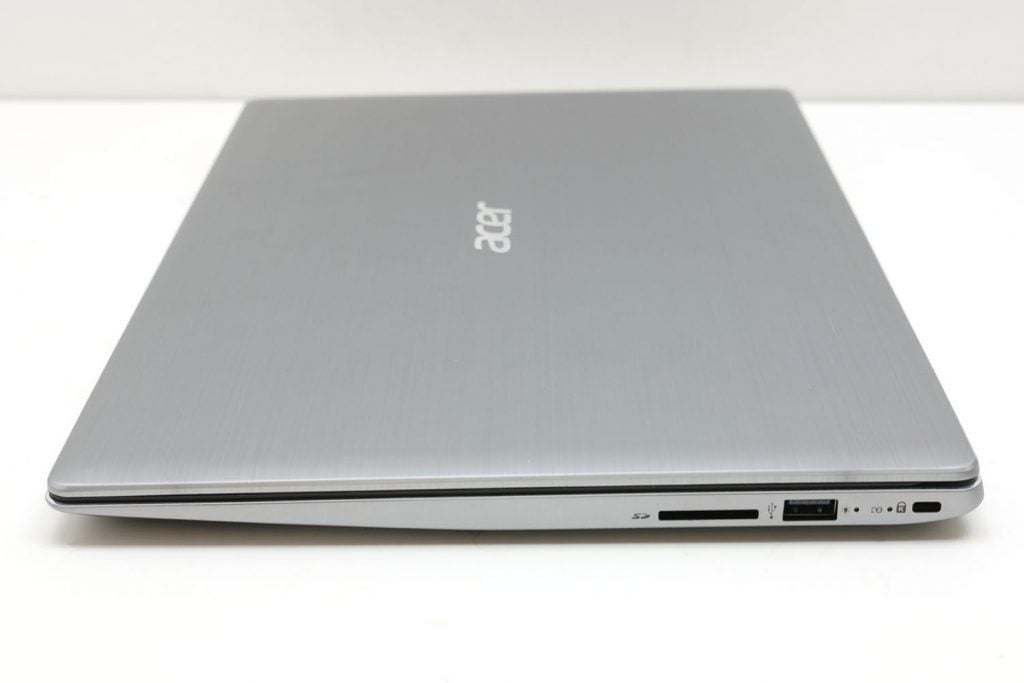 The bezel around the screen isn’t what I’d call narrow. Couple this with the fact that the display is 14 inches diagonally, rather than the 13.3-inch of smaller Ultrabooks, and you have a laptop whose footprint isn’t particularly small – it’s smaller than 15-inch machines, but its 338 x 234mm dimensions are a far cry from rival Ultrabooks. It’s impressively slim, though, at just 18mm thick.

As for connectivity, you get an ample selection. A full-size HDMI, USB Type-C, two USB 3.0 ports and headphone jack run down the left edge of the device, while the right is home to an SD card reader and a USB 2.0 port. You’ll also find a couple of indicator lights here to show whether the laptop is on, off, or in standby, and if the battery is charging.

Built-in AC Wi-Fi and Bluetooth are included too, plus there’s a webcam in the usual spot.

One of the big advantages of having a slightly larger laptop is that there’s ample space for a good-sized keyboard – and sure enough, this is the case here. Of course, you don’t get a number pad – but, otherwise, the keyboard benefits from a spacious layout and full-sized keys.

The key arrangement is also largely very good. Here in the UK, you get a proper Enter key and pound symbol – which isn’t always a given. Meanwhile, along the top is a row of smaller function keys and the power button. 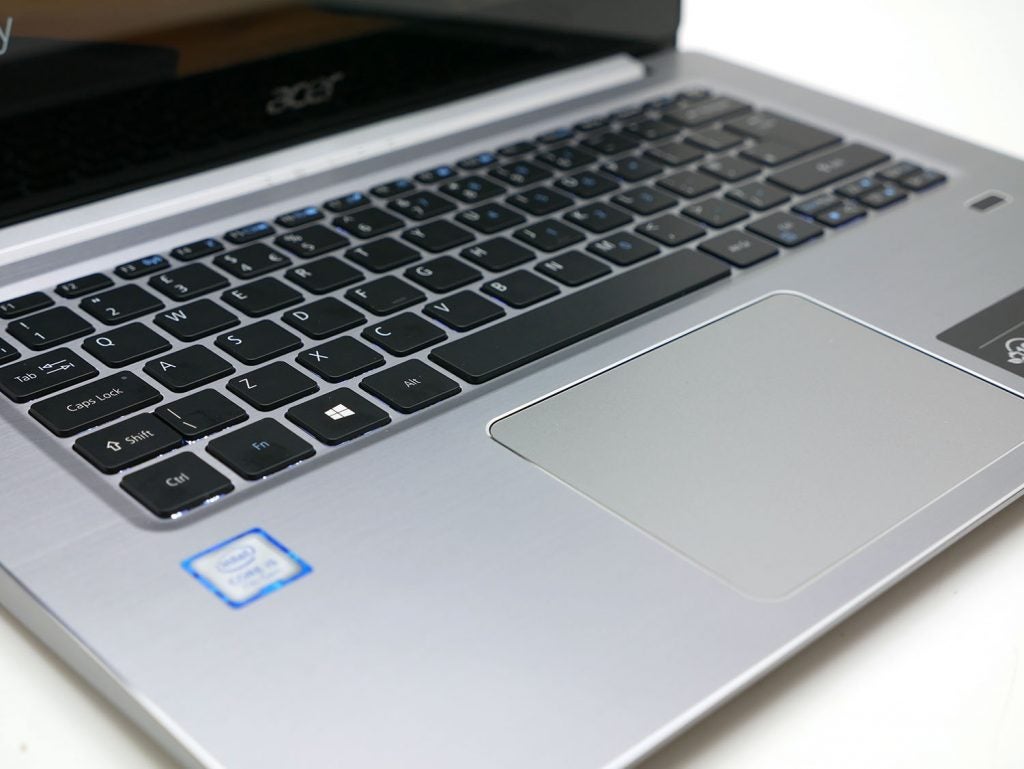 The cursor keys on the bottom right is the only area with which I take issue: the keys are too crammed in, plus I prefer these keys have secondary functions of Home/End/PgUp/PgDn – but it’s a minor point.

Rather more irritating is the feel of the keys themselves. The action is defined – there’s a noticeable step as the key is pressed – but it’s a little too soft and a touch inconsistent. As such, you don’t get quite the level of feedback of better keyboards. Of course, how important this is will depend on how competent a touch-typer you are, but I found it a little off-putting. 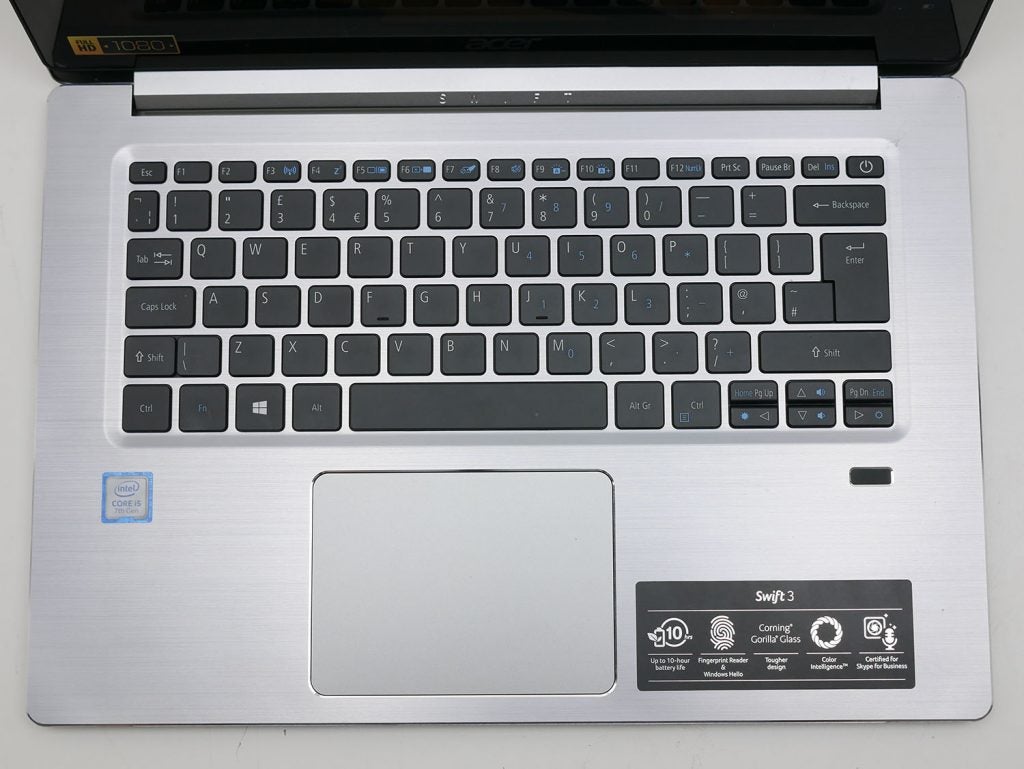 The trackpad, on the other hand, is much more of an all-round success. It’s large, offers a smooth gliding surface, has a light but defined click action, and works flawlessly with multi-touch gestures. There’s also an extremely handy fingerprint reader that makes logging into Windows 10 an absolute breeze: no more fumbling with passwords.

The screen on last year’s Swift 3 was something of a highlight. While it couldn’t offer the fine colour accuracy of top-end panels, and its maximum brightness was a bit low, it managed to get everything else right – making for an enjoyable display to use for most everyday purposes.

Sadly, that isn’t the case this time round. For a start, there’s the already-mentioned shiny surface. The glass front may look good – and a shiny surface tends to make dark colours appear a little deeper – but there’s no getting round the fact that reflections are annoying.

To an extent, the debate still rages over which is best: Apple clearly prefers the shiny screen route – but there’s a good reason that the majority of desktop PC monitors use matte finishes.

Perhaps more importantly, the actual quality of the display isn’t anything to write home about. Its 1080p resolution is fine, and it uses viewing angle-friendly IPS LCD technology, but otherwise its performance is lacklustre. 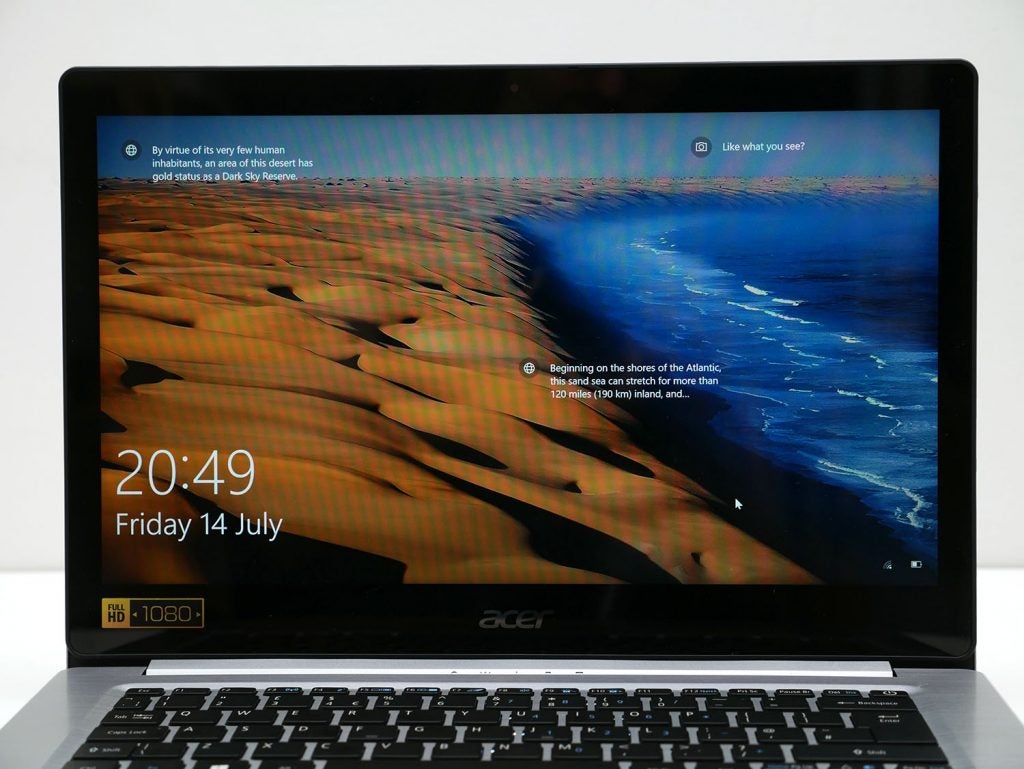 Maximum brightness is low at just 249 nits, while contrast is just 735:1. This isn’t the lowest we’ve seen on cheaper laptops, but it’s a far cry from the 1000:1 of better displays, and that of the previous version of this laptop.

These issues aside, colour temperature is reasonably accurate, ensuring there isn’t an annoying colour cast over the whole image. The 61.4% sRGB colour space coverage shows this display can’t quite deliver the finest differences in colour. All in all, the display is fine and will suffice for all but professional content creators, but it’s far from the best in its class – and it’s just a shame it isn’t as good as before.

Above its screen, the Swift 3 2017 has a 720p resolution webcam that can shoot at up to 30fps. It’s your typical affair that’s fine for video chat but nothing more. It’s a little grainy and choppy, but the automatic exposure and facial recognition in Windows Camera works – which is about all you can ask for.

Audio is handled by a pair of down-firing speakers on the underside of the laptop. They do a good job, providing plenty of volume without distortion. There’s none of the tinny quality of particularly poor speakers, although there’s little in the way of proper bass. Fine for shorter listening sessions, then, but you’ll want headphones for longer use.

Many users should be happy with the 7100U version, but the extra processor speed, RAM and storage certainly makes the £100 upgrade worthwhile. Notably, the previous version offered the latter configuration for £100 less.

To test the performance of this model we fired up our usual raft of benchmarks, starting with PCMark 8. This simulates a variety of day-to-day tasks such as web browsing, casual gaming, photo editing, video editing and the like, then comes up with an overall score. 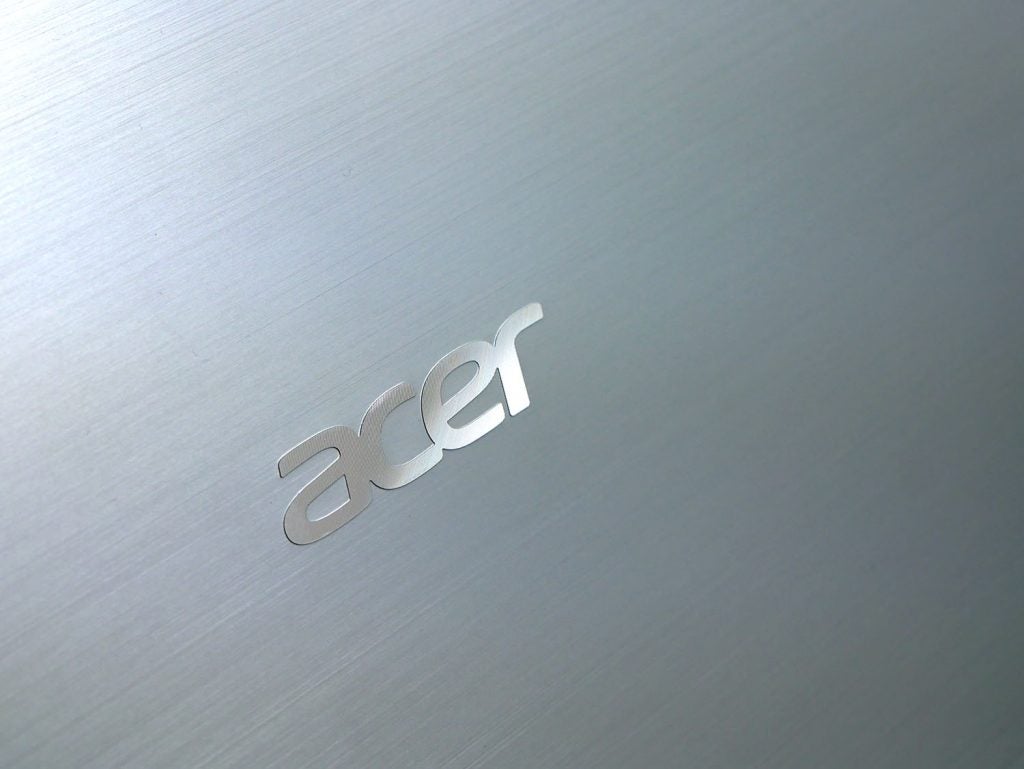 The Swift 3 earned 2709 points, which puts it somewhere between more powerful larger laptops and cheaper, less powerful ones. This score is also a couple of hundred points ahead of last year’s Swift 3, so there has been some progress here.

In the similar Geekbenck 4 benchmark the Acer Swift 3 2017 scored 6266 points, which again suggests a machine that offers more than adequate performance to tackle the basics.

Meanwhile, in the 3D gaming benchmark – 3DMark Ice Storm – it scored 49,636 points. While this is unlikely to be a strong gaming machine, technically, it would be just about possible to play older titles on it, at very low resolution.

Crucially, unlike even cheaper laptops, the level of performance here is fine for multi-tasking. The likes of the Acer Spin 1 are so slow that they almost have to be used like tablets – one task at a time. To find out more, read our Acer Spin 1 Review here.

Acer claims ten hours of battery life for the Swift 3 2017, but in our standardised test it didn’t achieve this. Setting the screen to a brightness of 150 nits (70% on the laptops brightness scale), it lasted 7h 36m.

This is about the same as the previous version of this laptop, so at least there’s some consistency there, but it’s still a touch disappointing considering the ten-hour claim. Clearly, Acer is testing the laptop at minimum brightness, which is totally impractical in normal use.

Watching an hour of Netflix saw the battery drain by 11%, suggesting the laptop can push a little closer to ten hours when only watching video. Spending a little more on premium 13-inch Ultrabooks such as the Dell XPS 13 will tend to get you slightly longer battery life.

Should I buy the Acer Swift 3?

I showered the previous version of the Acer Swift 3 with praise for its combination of design, screen quality, practicality and performance. However, while the 2017 update ticks most of the same boxes, it isn’t so successful in a couple of areas.

The screen is the biggest disappointment, with it being a step down in quality compared to its predecessor. It’s fine, but just not as good. And the keyboard, too, is also a touch disappointing.

Add in the fact that you’re paying £100 more for the same configuration and this laptop no longer stands out as particularly good value. It remains a good option – but it isn’t a runaway success.

At this price, the updated Lenovo IdeaPad 710S is also worth a look, with its lighter build and better screen.

The Acer Swift 3 2017 is a stylish, long-lasting, slim and plenty-powerful laptop for a reasonable price. It isn’t as outstanding a bargain as its predecessor, but it’s still well worth a look.