What is the Huawei MateBook X?

Huawei isn’t the first name that springs to mind when you’re on the market for a new laptop, but hasn’t stopped it from creating one of 2017’s prettiest portable computers, the MateBook X. Huawei’s first laptop is an impressive machine, and rivals the Asus ZenBook 3 for thin-and-light credentials.

However, with its performance slightly limited by a fanless design, and hot competition from heavier rivals such as the Dell XPS 13 and 13-inch MacBook Pro, the Matebook X will only ever be a niche option. But who said niche was bad?

The MateBook X’s design is defined by its slightly squarer shape than your average widescreen laptop. The 13-inch screen is surrounded by a very thin bezel, which really helps draw your eyes into the screen.

Aside from that, it looks eerily similar to the Asus ZenBook 3, which in itself looked rather similar to the 12-inch MacBook. But the MateBook X beats both of them by having a larger 13-inch screen, which is impressive given its small footprint. 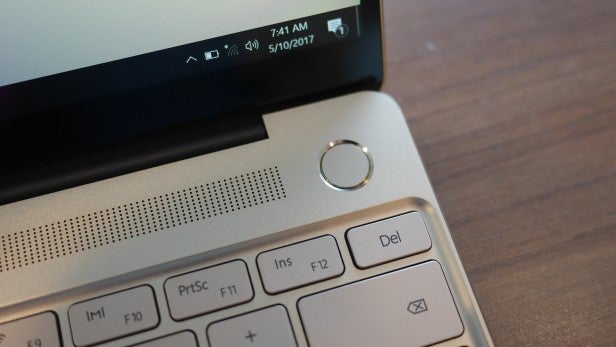 Where the MateBook X really comes into its own is portability. It’s not quite as light at the sub-1kg ZenBook 3, but at 1.05kg it comes very close. It’s thinner, too, at 12.5mm. This is one of the most baggable laptops you can buy today.

The port selection is a bit of a worry, with just a pair of USB 3.1 type-C connectors. The port on the left side accepts power and nothing else, while the port on the right is for data only. Since USB 3.1 is often universal (the MacBook Pro can accept power and data from any of its four connectors), it feels a bit limiting. You also don’t get a USB-C-to-USB-A connector in the box in all regions, although my review sample did come with one.There’s no word on whether UK models will get one, however.

The backlit keyboard is compact but doesn’t feel cramped. Not everyone will like the half-size up and down cursor keys, but everything else is present and correct. There are indicator lights for Fn Lock and Caps Lock buttons, which are both useful. Actual key travel is pretty good, but it’s always going to be limited by the thinness of the chassis so can’t rival the likes of Dell and Microsoft. 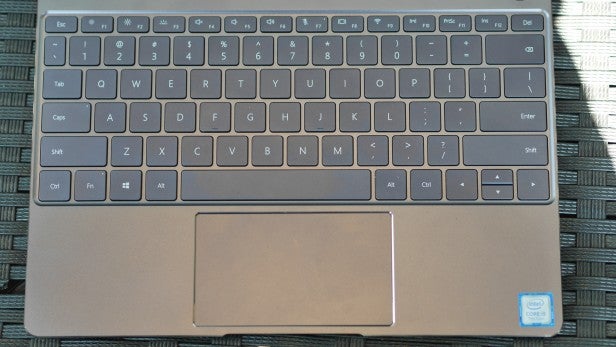 The touchpad is a bit small for my liking. It is certified for Microsoft Precision gestures, which is always welcome, but in a world where touchpads are growing bigger by the generation, it feels dinky. This is the price you pay for a smaller footprint, but it’s still a very small mark on what is otherwise a good input experience.

The power button doubles up as a fingerprint scanner, which hooks into the Windows Hello security platform. You can wake the laptop up from sleep using the button, and if you keep your finger on it for just a little longer you’ll be automatically logged in. It’s super-reliable, quick and a really nice feature to have.

The 2160 x 1440-pixel screen has a 3:2 aspect ratio, which is fairly uncommon on laptops (although is becoming more popular) and more often found on tablets. It looks great, but it does mean it’s hard to use two windows side-by-side because it’s taller than the average widescreen panel. It is, however, better for reading documents designed for paper, as you have less wasted space for margins than you would on a widescreen laptop.

Elsewhere, performance is excellent. Even without getting out the measurement instruments, this is clearly a quality panel. It’s really bright and colours appear vibrant, and there’s no hint of horrid motion blur you can get on some high-quality panels. 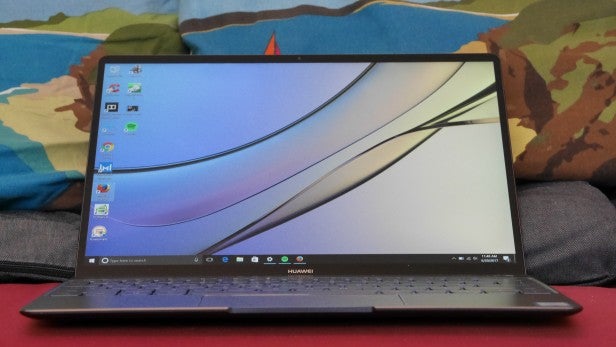 Under measurement, my equipment showed the screen putting out a huge 398 nits of brightness, which is beyond even Huawei’s claims of 350 nits. This is brighter than most laptops in this category, which means it’ll cut through even the harshest reflections on its glossy screen. I measured 90.5% of the sRGB colour gamut, which isn’t quite up to Huawei’s claimed 100%, but again still beats most premium Ultrabooks. Bear in mind that it’s not a touch panel, but it is at least protected by Gorilla Glass 3, which is a nice bit of added security.

The MateBook X’s speakers are a triumph for laptop so thin. It was developed in conjunction with Dolby, which not only provides the software assistance but also had a major say in the physical position of the speakers inside the laptop. This results in a dedicated grille just above the keyboard, with huge sound that manages good stereo separation, high maximum volume and excellent clarity. It’s the best audio experience on an ultra-thin Windows laptop.

Both the webcam and microphone are average at best. The camera manages relatively grainy video in anything but ideal lighting, and the microphone sounds a little muffled at a normal distance. Both are usable, but it’s disappointing on a laptop this expensive.