What is the Google Wifi?

The Google Wifi has become something of a poster child for the new wave of home networking systems that do away with routers and Wi-Fi extenders and instead rely on multiple Wi-Fi points. These “mesh” systems make it easier than ever to get reliable Wi-Fi coverage over a large area.

Not that the Google Wifi was the first to be available here in the UK – the likes of the Netgear Orbi and Linksys Velop were well ahead of it – but it is one of the simplest and cheapest options out there.

It’s not the fastest option out there, but for pure simplicity and ease of use, it’s certainly worth a look, especially if you find it discounted.

Editor’s note: Wifi is the name of the product, while Wi-Fi is referring to the actual standard.

Unlike most such mesh systems, Google is pushing the Wifi as a standalone replacement for existing routers. Most mesh systems of this sort can work with just one Wi-Fi point, but as individual routers go they’re not the fastest or most feature-rich, so would seldom be our first choice. That’s also the case with the Google Wifi. As such, it’s the two-node pack that I’m reviewing and would recommend you consider. 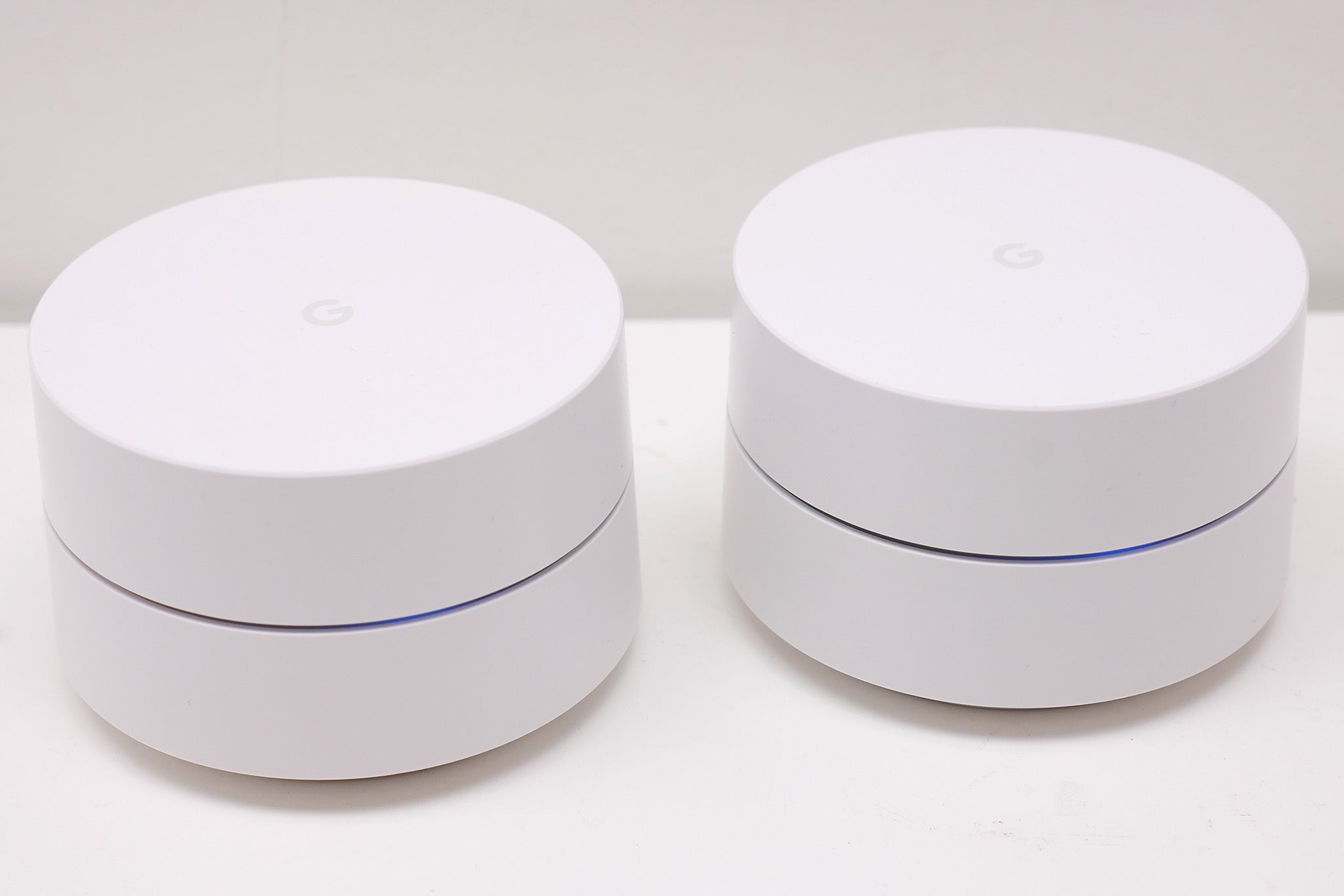 Being only a two-node system, the Google Wifi is one of the cheaper options available, with only the BT Whole Home being a cheaper way to get a multi-node system. You can even buy the Wifi as a one-pack, but I wouldn’t advise that as it isn’t really fast enough to provide great performance to a modestly sized abode.

In the box you get the two Wi-Fi nodes and their power supplies, plus one Ethernet cable for connecting the first Wi-Fi point to your existing router or modem. The system can take over router duties, or just provide Wi-Fi access points.

The units themselves are arguably the best looking of all the mesh systems out there. Finished in matte white plastic, they’re impressively small, and the almost featureless cylindrical design has an appealing minimalist quality to it.

Bisecting the cylinder is a translucent strip that glows in a variety of colours and patterns depending on the status of the node.

Round the back of the Wi-Fi point is a single unmarked reset button. Oddly, this requires you to unplug the power cable, hold down the reset button and then plug the power back in, rather than the more common system of just holding the button down for 10 seconds. 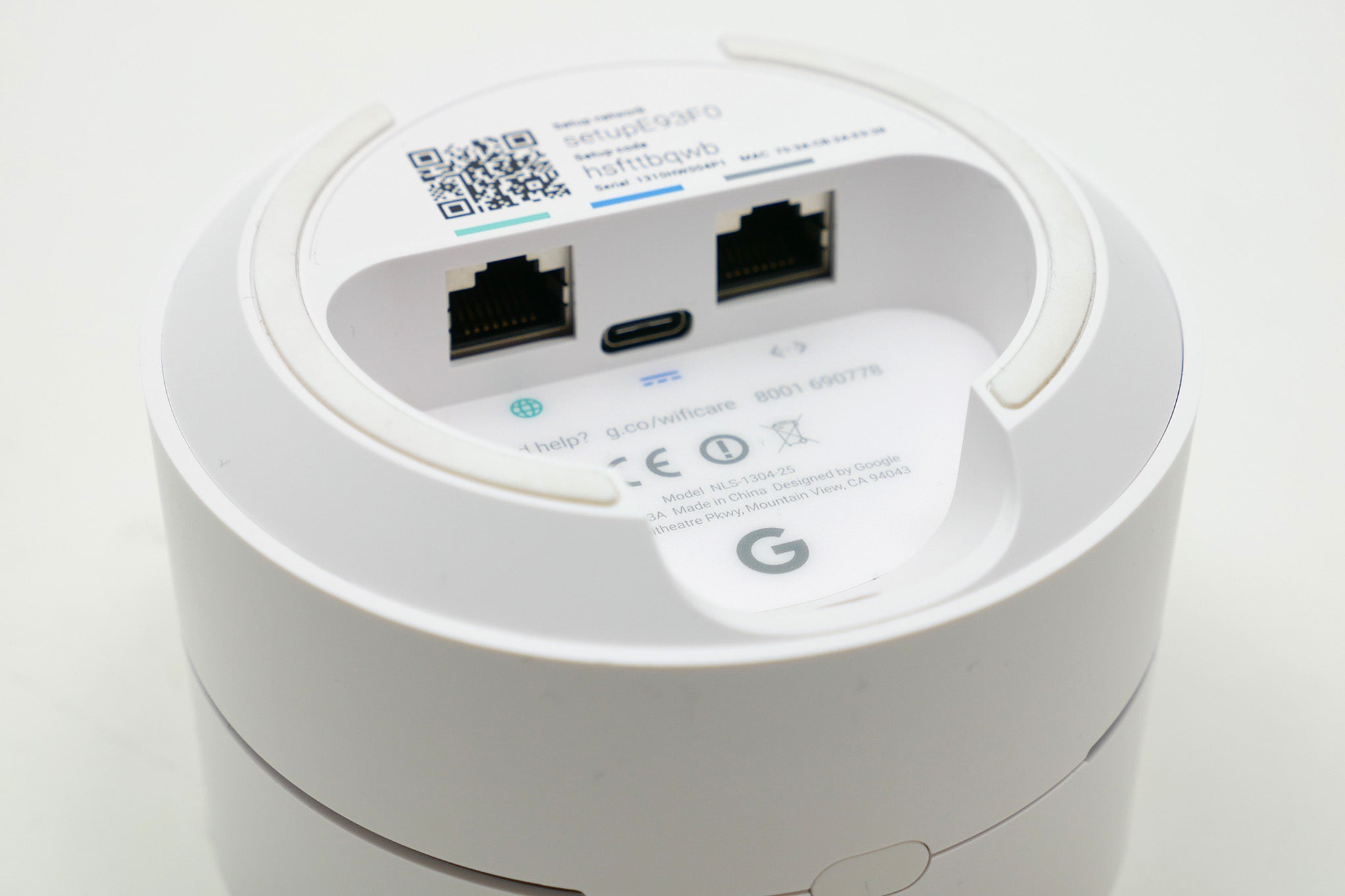 On the underside is the power socket, which is a Type-C USB port, along with two gigabit Ethernet ports. These are designed so that one is for WAN (your connection to the internet or your modem) and one for LAN (for other wired devices within your home).

The WAN port can be used for wired backhaul. Wired backhaul effectively means you won’t be wasting half your Wi-Fi bandwidth with your nodes talking to one another; all the inter-node communication will instead be done other Ethernet.

Plug the node into the end of the cable and it will seamlessly continue your Wi-Fi network. This is great if you have large distances to cover (adding Wi-Fi to a garage or workshop, for example), and effectively allows you to extend your network in a way that won’t result in slower speeds in far-away places.

Not that Google advertises this functionality, or makes setting it up particularly easy – you have to set the whole system up over Wi-Fi, then plug the wired node in at its final location. This is strange, as it’s a key bit of functionality for many users – one that will potentially make all the difference when choosing which mesh system to buy.

Otherwise, the Google Wifi is as bare-bones as such systems come. You can plug further devices (such as a network switch) into the other ethernet port, but you get no other features of which to speak.