Update: Since our original review, BT has started selling this product as a two-pack. Our review below refers to the three-pack that, at the time, was the only product available.

What is the BT Whole Home Wi-Fi?

BT is the latest company to join the new trend for a different approach to getting better Wi-Fi in your home. Rather than one big, powerful router, these new mesh router – or whole-home – systems use several access points to provide Wi-Fi coverage throughout your home. This is different to simply using a Wi-Fi extender, since a mesh network allows you to seamlessly connect to each access point without having to manually reconnect as you move around your house.

Instead of replacing your existing router, the Whole Home is meant to work alongside it. The result is arguably the simplest system of the three to setup – but one that has its downsides too.

The BT Whole Home Wi-Fi is sold exclusively as a set of three access points. This is in contrast to the Orbi, which is a two-unit system, and the Velop, which can be bought in ones, twos and threes.

BT’s approach makes sense on one level, since it’s reasonable to expect that those houses large enough to require a mesh router system will probably need several units. However, from my experience of other mesh systems, there are still huge gains to be had from deploying a two-unit system.

Indeed, in our review of the Linksys Velop, a two-unit setup proved faster than three units in some circumstances. As such, it would be nice to see BT offer the Whole Home starting with two units, with further ones available individually. 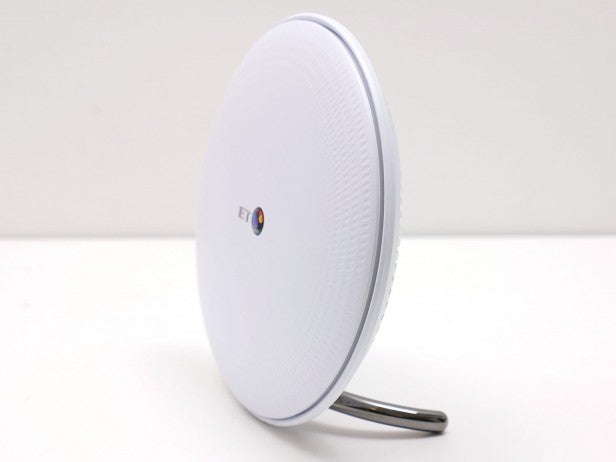 The access points themselves are nicely designed. The slim disc shape looks great and is reasonably compact, while a polished metal stand holds the disc upright. Alternatively, the units can be wall mounted, although there’s no way to remove the stand so the disc sticks out at an odd angle.

A nice touch – which has become something of a BT signature – is that each unit includes a slide-out plastic piece that has on it the default Wi-Fi name (SSID) and password, as well as the admin password. So, you don’t have to bend down and peer at the bottom of the router while setting up.

Otherwise, there’s very little to these units. Like other mesh router systems, the Whole Home lets you add wired devices to your extended Wi-Fi network. However, each unit has only one Ethernet port, so you’ll need to invest in a network switch if you want to plug in more than one device.

In contrast, each Velop node has two ports while the Orbi router and hub each have four.

You also miss out on any USB ports for connecting and sharing printers or USB storage with the rest of your network – although if your existing router has this feature it will work via the Whole Home too.

USB ports are also missing from the Velop, but they’re present on the Orbi – although Netgear is yet to actually release firmware that lets you do anything with them.

Finishing things off externally, there’s a light on the base that glows a variety of colours to indicate the disc’s status, plus a power button, reset button and a WPS button for quickly adding new devices to the network. 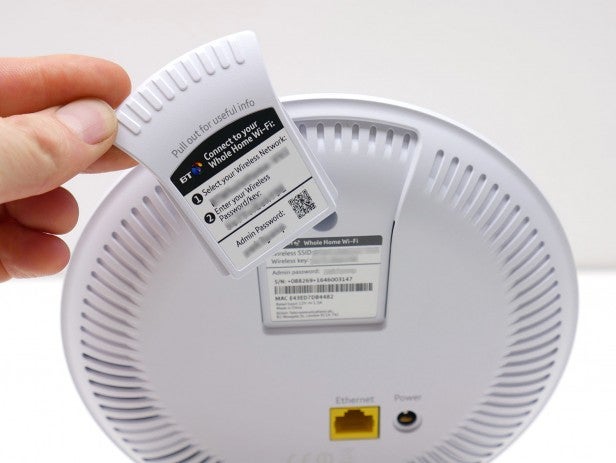 Like other mesh systems, the Whole Home doesn’t present each band separately; it combines them so you only have one SSID to worry about. The system then automatically determines which band is best for your device to connect to, taking the headache out of having a multi-band, multi-router system such as this.

Indeed, this is the crucial feature of these mesh systems as compared to traditional Wi-Fi extenders.

One of the key things that distinguishes the Whole Home from other mesh routers we’ve reviewed is that it isn’t a router at all. Other systems can be configured to work with an existing router in an access point-only mode, but with the Whole Home that’s the only way it works.

This doesn’t have to be a BT router, though. It just means that if you’re looking for an overall upgrade to your existing router – perhaps something that adds in gigabit Ethernet and USB support – then you’ll have to look elsewhere.

Otherwise, setup is a cinch. You download the accompanying app, available on Android and iOS, and it guides you through the whole process. 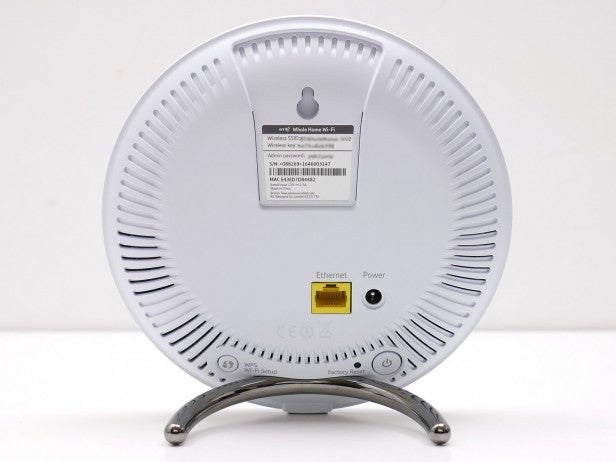 First you connect one of the discs to your router via a cable, then connect to its default Wi-Fi signal via your phone. Once connected, it will automatically detect the settings it needs and lights up to show it’s ready to go, taking about a minute to do so. Then, power on each of the other two units in turn, waiting for the app and the network to find them.

In some ways, it’s similar to the Velop setup process – in that it’s all done via your phone. However, while I found this slow and frustrating with the Velop, the Whole Home is quicker and simpler.

The issue of always needing a phone to admin the system remains, rather than just having a web interface accessible from a computer, but with it being an access point-only, there’s very little to actually do – all the network admin is handled by your router.

What you can do via the app is name each disc, check the status of the Whole Home system, add more discs, change the LED brightness, check for firmware updates and, most usefully, pause the Wi-Fi to temporarily shut off internet access – perfect for stopping the children from becoming distracted when they should be doing their homework or eating dinner.

One thing to note is that you’ll probably want to turn off the Wi-Fi on your router; the Whole Home doesn’t extend your existing Wi-Fi signal but rather creates its own, simply relying on the router for its wired network connection.