What is the Google Pixel 2 XL?

The Google Pixel 2 XL may have just been superseded by the Pixel 3 XL but that doesn’t stop it from remaining an excellent entrant in the smartphone space since its late 2017 arrival, faults and all.

Whilst the Pixel 2 forms a natural evolution from 2016’s base Pixel model, the Pixel 2 XL adopts the extended display trend that took ahold of 2017 onwards, seen most prominently in phones like the Samsung Galaxy S9 and iPhone X.

Google has assembled a fantastic phone, which once again pushes a Stirling camera experience, but there are still improvements to be made, especially when it comes to the matter of that interesting but inconsistent new display.

It’s hard to cover the Google Pixel 2 XL’s looks without comparing it to the competition. For a long time, smartphones were rectangular slabs of metal with a big bezel running around the display and a prominent chin and forehead. All this changed when Samsung unleashed the Galaxy S8, which saw the slimming of that bezel right down and a screen that stretched edge-to-edge.

The Google Pixel 2 XL doesn’t really fit into either category. I’m sure some will claim that it features a bezel-less display – but in reality, it doesn’t. Like the LG V30 and Galaxy S9, the Pixel 2 XL has an 18:9 display with rounded corners – but unlike those devices, there’s still a prominent bezel around its sides. This makes the Pixel 2 XL feel big, and more comparable to the Galaxy Note 8 and Huawei P20 Pro in terms of size.

At least the bezel serves a purpose in the Pixel 2 XL. Above and below the display sit decent-sounding, front-firing stereo speakers, plus Google has added pressure-sensitive edges that will invoke the Assistant with a squeeze of the sides.

Opting to make a bigger handset requires deeper thought with regards to the design considerations elsewhere. Samsung, LG and Huawei have all started to heavily curve the rear of their devices, helping them feel more comfortable in the hand. Google has done the same, but not to the same extent. As a result, the Pixel 2 XL feels more difficult to hold. 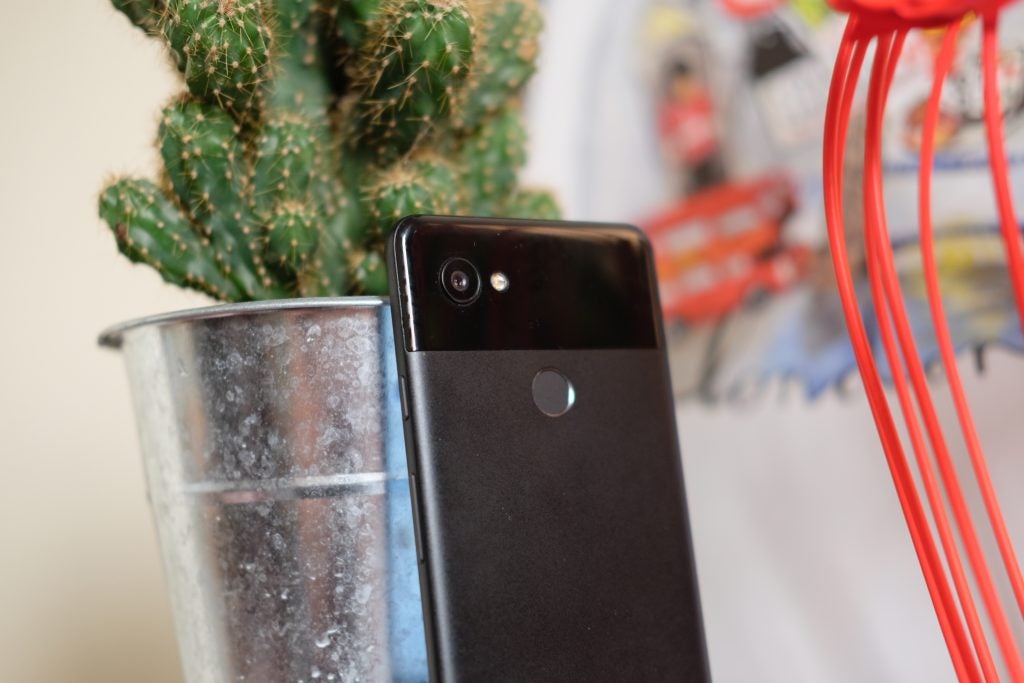 The back of the Pixel 2 XL is a mixture of glass and aluminium, although the glass features only sparingly in a shade covering the camera and flash. The aluminium is covered in a coating that gives a chalkboard-like feel; resistive, grippier and slightly textured. It’s an excellent finish that goes some way to add the grip lost by the Pixel 2 XL’s lack of curves. I only question how this coating will wear over time…

My review unit is the all-black model, but I prefer the Stormtrooper-esque black and white variant. It even has a small pop of colour in the form of an orange power key. This extra hit of colour adds a fun element to the phone.

Like most flagship handsets worth their price tags this year, the Pixel 2 XL is IP67-rated for water-resistance. This means you can submerge the phone in 1m of water for about half an hour without any resulting damage.

In the Pixel 2 XL, Google has also followed the trend to remove the headphone jack. I can only assume it was for waterproofing purposes – which is a shame, given that the company made such a point of keeping it last time around. There’s a USB-C to 3.5mm port dongle in the box and there are plenty of ‘Made for Google’ USB-C headphones coming soon – but it remains annoying.

At 6 inches, the screen on the Pixel 2 XL is the biggest seen on a Google-branded handset since the Nexus 6. The display on that phone was one of its weaker features, and it’s a similar story here.

It isn’t bad. But it simply isn’t in the same league as the panels manufactured by Samsung and used in its own flagships.

Instead of using one of the fantastic Super AMOLED panels from Samsung, Google has opted for a plastic OLED, or P-OLED, from LG. LG isn’t as experienced as Samsung when it comes to building smartphone displays, and it shows.

In terms of colours, the screen lacks punch and whites are often tinged blue. If you’re looking at a website that’s primarily white, the colour isn’t uniform and is frequently streaked with grey. It’s also a very cool display, meaning you’ll feel it in your eyes when you’ve been staring at it for long periods. This is made worse by the fact that Google doesn’t offer any way to alter the temperature of the screen, so you’re stuck with how it comes out of the box. Viewing angles are also quite poor. Tilt the phone to either side and ugly banding will appear, altering the colours.

Google added a few more colour modes to boost the saturation but this hasn’t really made the screen any better. 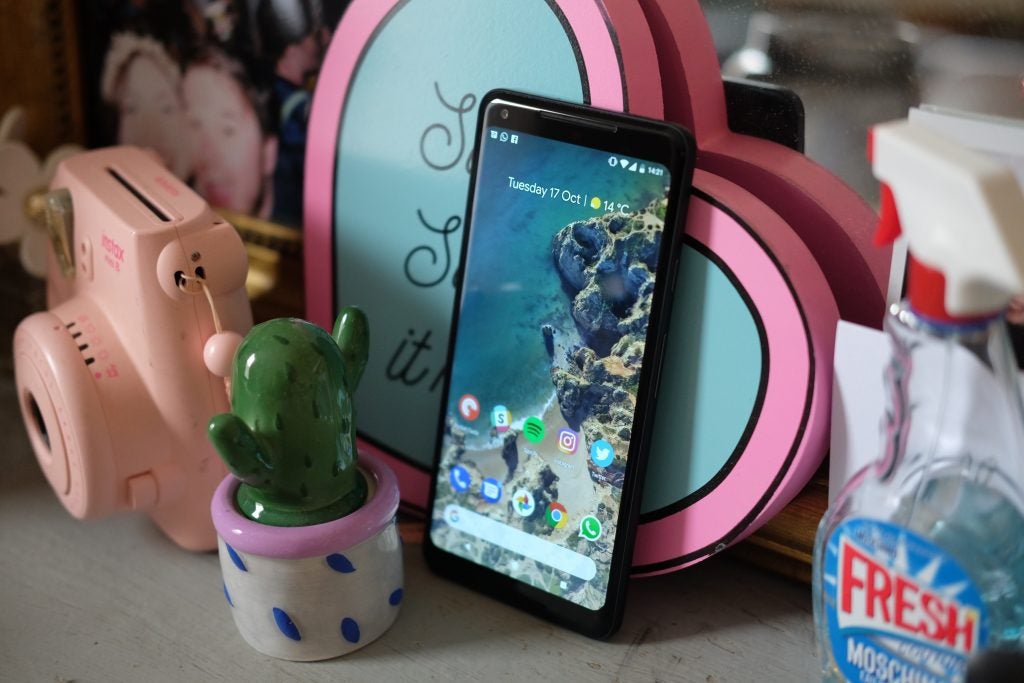 It isn’t all bad news, however. With a quad-HD+ resolution, there’s plenty of detail and movies look great. This screen isn’t being touted as an HDR display, but Google has worked some software trickery to allow it to playback HDR-enabled clips from YouTube – and the extra contrast looks fantastic.