When it comes to activity tracking, the Vivosmart 3 ticks all the boxes. You can expect the usual step counting, compared against a dynamically adapting step goal, alongside flights of stairs climbed and the sleep obtained overnight. In particular, the adapting step goal is a neat way to stay motivated if you find yourself under- or over-achieving day to day. The app also features various screens that breakdown historical data, enabling you to see the time of day you’ve achieved your step goal over the course of a month.

So far it’s all par for the course, with the Vivosmart performing as I’d have expected during the day and night. One point of note is that I did notice the Vivosmart 3 racking up extra steps while I was sat on a speedboat during a recent holiday. Aside from this, however, the step counting remained consistent against a Fitbit Alta HR I also had on at the time.

Move reminders – which have become standard across most fitness trackers – feature, too, so the band will vibrate when you’re sat idle for too long. It will let you know when the ‘move bar has been cleared’ as a message on the display, once you’ve accrued enough steps to satiate its appetite. 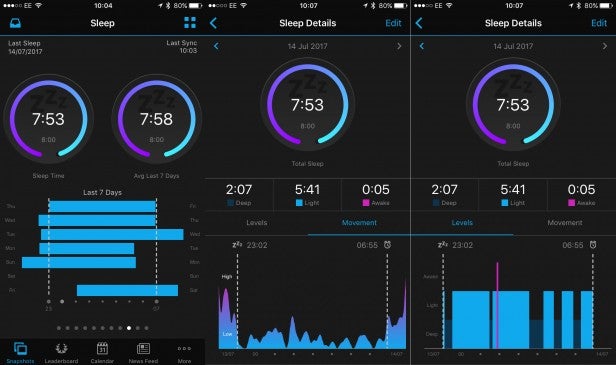 Sleep tracking also measured up, automatically and accurately taking note of when I fell asleep and awoke the following morning. The way this sleep data is presented in the app is, to some extent, an improvement over what’s seen from Fitbit. In particular, I like how easy the bar charts clearly shift to show the times so you can quickly identify if you’re gradually going to sleep later over the past seven days. It made me feel more inclined to correct any deviations.

You can also dive into each day to get a better idea of your sleep quality and time spent in different sleep stages. A separate chart shows your movement levels throughout the night.

One useful feature the Vivosmart 3 brings to the table is its all-day stress rating, which monitors your heart rate to take a view on your general well-being. My stress rating while queuing to get through airport security for my aforementioned holiday did indeed measure as high, no doubt exacerbated by the slow-moving line and infuriating lack of efficiency exhibited by all.

Like your sleep data, the all-day stress readings are broken down to time spent in different levels of rest, low, medium and high stress. In order to try to reduce your overall stress, there are guided breathing exercises you can initiate from the Vivosmart 3. You can choose a time, such as 2 minutes, and the display will guide you on the length of time to inhale, then hold your breath, then exhale in a controlled manner. 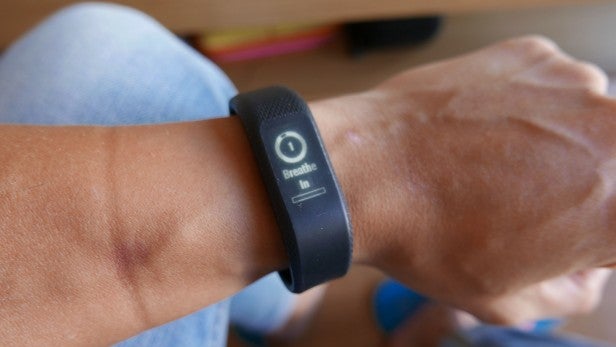 While it won’t wash away all of your worries, and I do wish some haptic vibrations were used to let you know when to transition between breaths, it remains a nice reminder to slow down. Again, all of this data is available in the Garmin Connect app.

There are also VO2 Max estimations, which work in a similar way to the Cardio Fitness score on the Fitbit Charge 2. You can manually trigger a test by taking a 15-minute walk while wearing the band; it uses your heart rate performance measured against your personal measurements of age and weight. 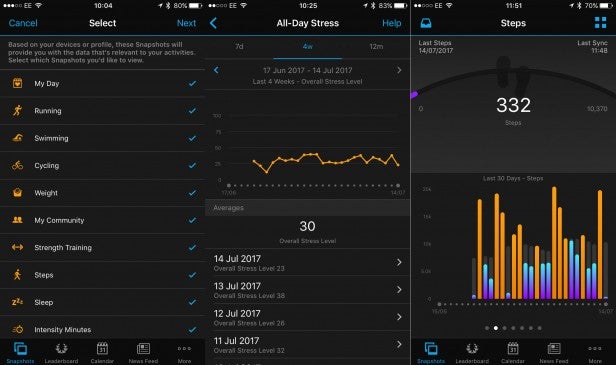 While I’m not entirely sure of the accuracy of this approach – most fitness tracker VO2 Max tests require you to jog – it’s at least another metric you can use to measure your health over time.

Finally, the Vivosmart 3 also packs in rep counting for strength training. However, how useful you’ll find this I’m not entirely sure. There aren’t any useful additional measurements, such as the velocity of your reps that you get from dedicated strength training wearables such as the Beast sensor or Gymwatch; it’s literally just the number of reps. 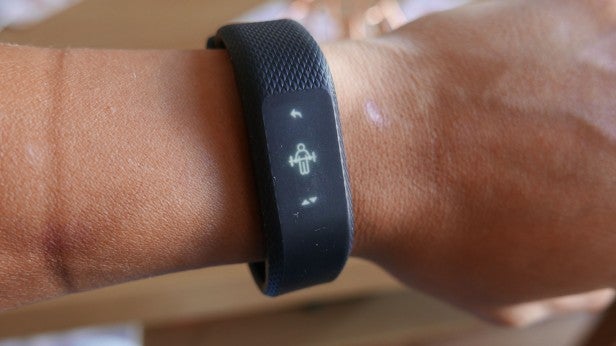 You’ll have to dive into the Connect app and assign the weight manually and possibly the actual exercise variety, although the Vivosmart 3 did correctly guess some exercises automatically based on the movement.

The rep counting itself was at least accurate for the most part; only on a few occasions did it miss a rep or over count, but correcting such errors from the device takes only a few inputs.

But while I’m a stickler for logging workouts, doing it in this way doesn’t appear to be the most efficient method. And unless you’re smashing out constant AMRAP (as many reps as possible, for you non-Crossfit fans) sets, where you might actually lose count, counting your own reps isn’t exactly difficult. As a result, simply logging in a dedicated app manually between sets isn’t particularly troublesome. The way your strength training workouts are presented in the app is also rather confusing and hard to process. 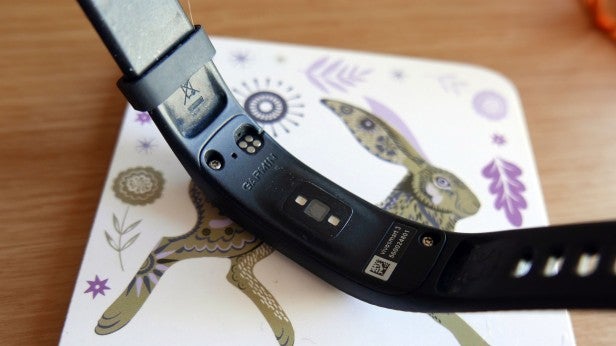 Battery life is rated at around five days, which I found rather conservative – although this will depend on your usage. Certainly, I found it could last close to six days in certain scenarios.

Charging is handled through a USB cable with a proprietary clip. It clips on securely, so there are no concerns about the Vivosmart 3 becoming dislodged.

Should I buy the Garmin Vivosmart 3? 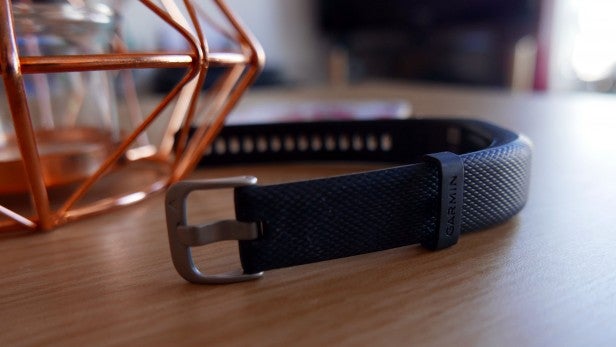 Against the similarly priced Fitbit Alta HR and Fitbit Charge 2, Garmin has included some genuinely useful extras to separate the Vivosmart from the pack. The water-resistance alone is a strong differentiator, and features such as the all-day stress level are also welcome inclusions.

Where the Vivosmart 3 falls short of Fitbit’s offerings is in its overall style and customisability, and in the app department. While the app isn’t as messy as previous incarnations of Garmin Connect – previous versions would bundle interfaces for Garmin’s myriad of other devices that also use Connect, including its golfing range – it remains difficult to navigate and make sense of some of the information.

I’d be overjoyed if Garmin revamped Connect to make it approachable. But, as it stands, given some time and patience, the Vivosmart 3 is a fantastic mid-range fitness tracker for all but the most enthusiastic of exercisers that need additional GPS functionality. If you do find yourself needing the accuracy of GPS, consider the excellent Garmin Vivosmart HR+ or Samsung Gear Fit2.

A great mid-range fitness tracker that ticks all the boxes, with the added bonus of water-resistance and decent smartphone notifications too.