What is the Garmin Vivosmart HR+?

Since the Apple Watch arrived, it seems that every company in the wearables market has been hell bent on making a device that can handle it all – from fitness tracking to Twitter notifications – while also looking like a high-end fashion item.

The result has seen some slightly odd hybrid fitness trackers, such as the Fitbit Blaze and Moto 360 Sport, which look nice enough, but don’t quite cut the mustard for hardcore fitness fanatics. 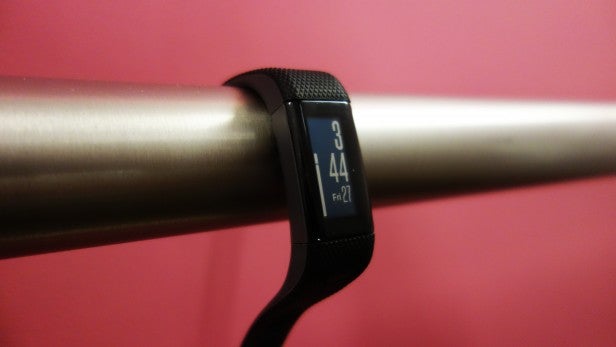 The basic black unit I reviewed has a tiny rectangular 1.0 x 0.42-inch E Ink touchscreen that’s housed in a rubber strap. Some people will find the design boring, but I’m a big fan. Too many of the trackers I test these days focus heavily on looking snazzy, and as a result make too many compromises when it comes to functionality. Key offences include a lack of waterproofing and the absence of key sensors, such as a heart-rate monitor and GPS.

The Vivosmart HR+, on the other hand, makes none of these compromises. Garmin has loaded the wearable with a heart-rate monitor, GPS, accelerometer, barometric altimeter and pretty much every other sensor that you could possibly think of. It’s also pretty darn rugged and has been designed to survive submersions at depths of up to 5 ATM (50 metres). This makes it one of a select few activity trackers with basic smartwatch functionality that can be worn 24/7.

The only negative of the device’s design is that the main unit is fairly chunky, with a thickness of 192mm. This isn’t a deal-breaker for me, but it could be a sticking point for fashion-conscious buyers or people with thin wrists. Placed on a friend’s slender wrist, the Vivosmart HR+ looked comically chunky. 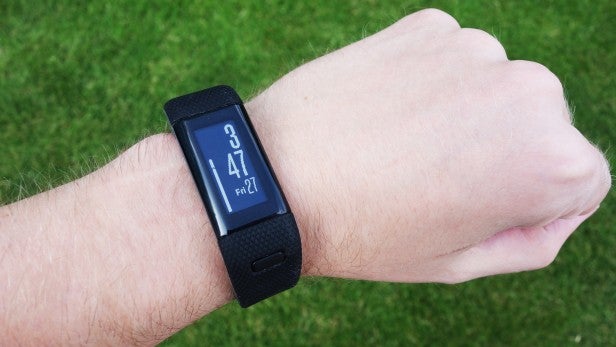 Also disappointing is the fact that charging of the device is handled using a proprietary dock. On numerous trips abroad I’ve forgotten to pack dedicated charge cables, and as a result I’m not a fan of any form of proprietary charger. But considering few wearables are charged using regular Micro USB or USB-C cables, the inclusion of a proprietary dock isn’t actually a massive surprise. In addition, considering the Vivosmart HR+’s solid five-day battery life, it shouldn’t prove too much of an issue.

Once charged, setting up the Vivosmart HR+ is pretty straightforward. Simply download the Garmin Connect app to your smartphone (iOS and Android) and set up, or sign into, your Garmin account. From there you just have to turn on the handset’s Bluetooth and follow a series of on-screen commands to pair the Vivosmart HR+ to your phone and account.

Once paired, the Vivosmart HR+ offers a few useful smartwatch services, such as a music player controller and basic notifications and weather alerts. But its main focus is health tracking.

The Vivosmart HR+ automatically tracks your step count, heart rate and calories burned, alongside distance and time walked. However, you need to manually notify the device when you’re about to embark on a specific exercise. You do this by accessing a second menu that activates when you press the Vivosmart HR+’s front physical button. From there you have to press the exercise icon and select the workout you want it to track.

I’ve always been a big fan of trackers that can automatically detect what exercise you’re doing – the Basis Peak and Withings Go are good examples. But considering the sheer volume of exercises the Vivosmart can track and how much data it offers thereafter, I can forgive the manual controls.

Testing the Vivosmart HR+ against a Basis Peak and Microsoft Band 2 on a run I know is 5km long, the Garmin performed well. The Basis Peak and Band 2 are two of the most accurate trackers I’ve tested and the Garmin’s distance measurements were consistent with them. 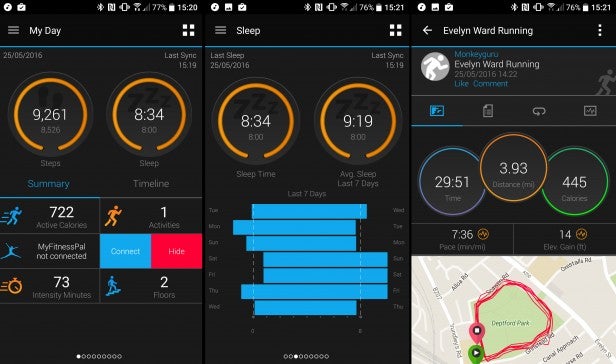 The heart-rate reading also remained consistently accurate and, unlike the Blaze, never once told me my heart was beating at a humming bird’s pace. The Vivosmart is also able to detect when its user is running up elevations, which will be useful for those like myself who occasionally do stair sprints.

Once you’ve completed your workout, you can view all the information on the Vivosmart’s screen. To access it all, however, you need to activate the Garmin Go app. Within the app you’ll be treated to charts showcasing everything from your overall activity for the day to performance breakdowns of specific workouts, and how you slept the previous night.

The app isn’t the most intuitive I’ve used, especially compared to Microsoft Health and the Withings app. But this is mainly due to the sheer volume of data and number of submenus it throws at you. This will potentially put off those looking for a more casual experience, simply wanting to know how far they ran and for how long. But if you want a tracker that helps you to monitor your ongoing progress, it’s a blessing. Using the pace tracker and heart-rate monitor, I soon found myself racing to beat my previous run’s last mile timings.

Once I got my head around the app’s interface I also found the Vivosmart’s “intensity minutes” measurement very useful.

Intensity minutes are the points during a workout when your body is at peak performance. The intensity data is a great addition that made it quick and easy for me to track my progress from workout to workout.

The Vivosmart also uses your intensity minutes to tailor the activity goals it sets you to meet the recommended stress standards set by big name health bodies, such as the World Health Organization. It’s a handy feature that reduces the likelihood of you overreaching and straining your body.

The only other trackers I’ve tested that offer this level of detail are the Jaybird Reign (when it works) and Basis Peak.

I’m also a big fan of the Vivosmart’s Move IQ. It’s another nice feature that gently conditions you to be more healthy, sending a vibration alert telling you to move whenever you’re inactive for more than an hour. 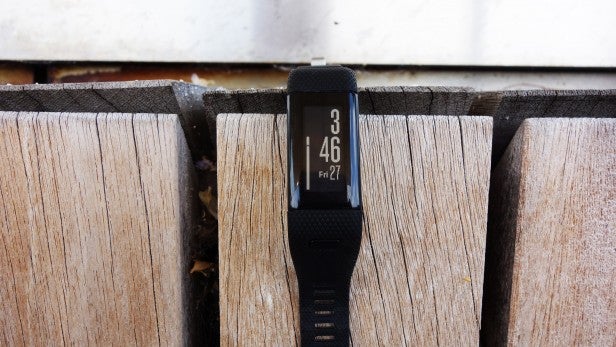 Should I buy the Garmin Vivosmart HR+?

The Garmin Vivosmart HR+ may not be the prettiest wearable around, but it ticks all the right boxes when it comes to functionality. If you’re after an accurate, well-built fitness tracker to help you take your workout to the next level, this is one of the best available.

However, if you’re a newbie, or casual jogger just looking for a quick and easy way to track your sleep, step count and distance travelled, the Vivosmart is overkill. For casual users there are cheaper wearables available, like the stellar, £50 Withings Go.

If you’re a hardcore fitness fanatic, this is the wearable for you.