Available on Xbox One (reviewed), PS4, PC
So, can FIFA 16 make it two storming performances in a row? In most respects, yes, building on EA Sport’s more authentic brand of football and fixing many of the few complaints we had about FIFA 15. The graphics and presentation might not have moved on much, but it’s an even more welcoming game of football and its modes are better fleshed out. All the same, some things have changed since FIFA 15, and not everyone will find these changes welcome. If you were looking for a polished, perfected version of the last FIFA, you won’t find what you’re looking for here.

It won’t take you long to spot why. This year, EA has focused on tightening up the defensive play while adding more scope for building attacks in the midfield. The AI has been rebuilt to work better as a unit, closing down on attacking players, restricting their angles of attack and giving you more support to go in and make the tackle without worrying that your CPU controlled team-mates will fall apart and let an easy shot or threatening cross through. The midfield, meanwhile, sees revamped rapid fire pass mechanics balanced by equally smart intercept AI. 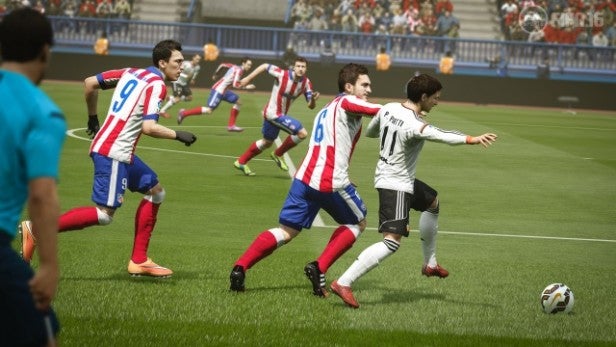 The result is a step away from the hugely exciting but slightly silly end-to-end play of FIFA 15 and a step back towards the slower, more methodical defensive play of FIFA 13 and 14. On the one hand, the defence is significantly stronger, strikers are easier to pin down and fast-paced attacking players aren’t continually storming your goal – all fixes for some of the major complaints fans had about last year’s FIFA. Time passes correctly and they’re fast, precise and controllable, helping you transform a sudden interception into a speedy, laser-guided assault on the oppositions’ goal. On the other hand, there’s more of a tendency to get bogged down in the midfield and to have carefully executed assaults on goal spoilt by last-minute interceptions or an impenetrable defence. The upshot? FIFA is both a better, more authentic football game and a harder one to love.

Let’s not go crazy. We’re still a long way from the dull, low scoreline football of FIFA 13 and 14, and while FIFA 16 hasn’t got FIFA 15’s pace or excitement, it’s nowhere near as slow as some of the more lunatic Pro Evo fans are making out. It’s not such a crowd-pleasing, goal-a-minute footie game as its predecessor, but there’s tension and release to be found in building up your play, tacking advantage of opponent errors and driving the ball forwards towards goal. 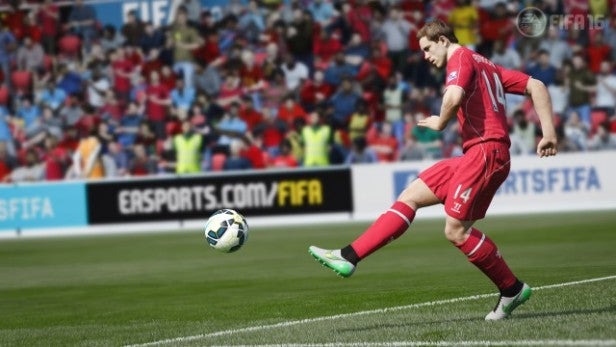 And while the defensive AI still seems curiously more vulnerable to solo runs by fast-paced players than flurries of passes followed by a cross and a shot, you’re not constantly being bulldozed by the likes of Messi and Ronaldo speeding through the centre and planting one right in the net. FIFA 16 has class. It’s happy for you to score but it won’t give you goals for playing cheap.

The core modes, meanwhile, see significant improvements. Career mode, again split into Manager and Player careers, has a bit more to it, with more emphasis on training and on drills to give your player’s skills a boost. While playing only as one player on the pitch won’t be everyone’s cup of tea, it still grounds the experience and makes you think more carefully about how you find opportunities, watch for incoming threats and support attacking team-mates. And if you prefer to control the whole team, that’s still very much on the menu. 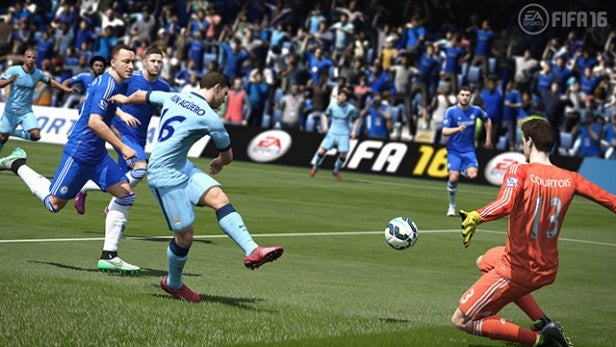 Ultimate Team – FIFA’s brilliant collectible card game meets fantasy football combo – remains one of the jewels in the FIFA crown, not to mention the key reason that fans keep coming back months after release. All the same, it’s always required the kind of commitment you’d associate with a Hearthstone, Diablo III or Destiny – fail to put in regular hours and you won’t get all that far.

Luckily, EA Sports appears to have both noticed and thought about what it could do to broaden Ultimate Team’s appeal. FIFA 16’s solution is FUT Draft Mode. Choose a difficulty level then choose a formation. Now pick a captain from a selection of world-class players to build your team around. Finally, pick your other players, get them in position and choose your team a manager, looking all the time to build synergies between your players that will affect the overall chemistry rating of your team. When you’re done, you can compete in a series of up to four matches, staying in and winning bigger prizes until you’re beaten. Coins, packs and loan players are all up for grabs. 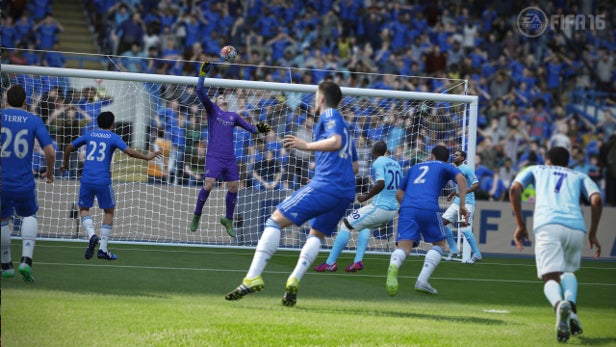 The great thing about Draft mode is that you can put a few hours in and get something out, while getting a chance to field players you might never get your hands on in the conventional Ultimate Team mode. You can also learn about different strategies and building chemistry without wasting hours on some lame duck squad. If it’s a gateway drug to the full-scale Ultimate Team then it’s brutally effective. Draft mode could easily get you hooked. And beyond this we get the usual mix of solo friendlies and exhibition matches, tournaments and co-op championships, not to mention online leagues and games.

Draft mode isn’t the only concession to accessibility. Inter-match drills are better than ever, teaching genuinely useful skills and strategies, while a new built-in trainer surrounds the current player with a glowing ring plus context-sensitive prompts for appropriate buttons to press. Old-hands can switch it off quickly and without remorse, but if you’re trying to learn FIFA or teach someone else, you’ll find the trainer’s tips invaluable. 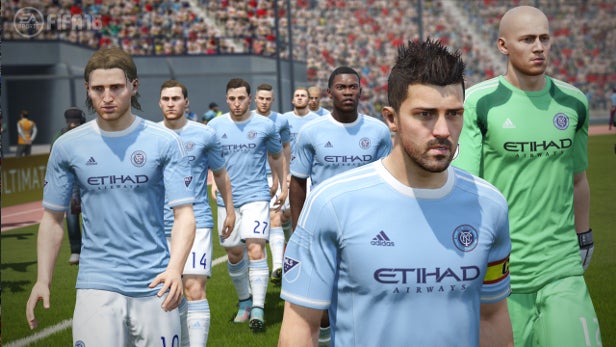 In terms of presentation, FIFA hasn’t moved on much since last year, but then last year was already pretty damn good. The visuals and music capture the atmosphere of live TV football coverage, with impressive if rather dead-eyed facsimiles of the world’s leading players and the best action replays in the business. The commentary from Alan Smith and Martin Tyler is almost eerily spot on. True, it grows repetitive the more you play, but players are picked out and discussed so believably and mistakes spotted so quickly that it’s sometimes hard to believe that the Sky Sports duo aren’t looking through the window at your TV screen. It’s a shame that things fall apart slightly if you switch to another headline feature – coverage of the women’s national teams. The commentary is fine but the presentation overall isn’t quite so slick and TV-like.

That aside, this is another fine FIFA, and while – hand on heart – I prefer the more aggressive style of FIFA 15, my reservations melt away with every hour. This might not be the most boisterous or action-packed version of the beautiful game, but it is a more believable one. It’s still stirring and atmospheric, with a real depth and thought to all its game modes. EA Sports has done things differently, but it has delivered a storming FIFA once again. 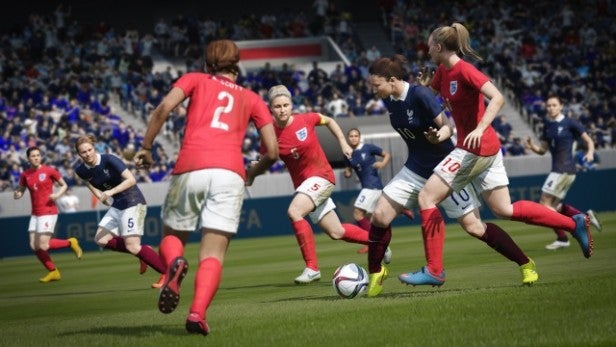 Sadlly, storming may no longer be enough. Last year Pro Evo gave FIFA some real competition, and this year that competition’s even fiercer. Powered by the same Fox Engine technology as Metal Gear Solid V, PES 2016 looks better than FIFA, has more realistic-looking players and – with the UEFA Champions League license, some of the old licensing issues seem behind it. More importantly, it plays a wonderfully fluid and exciting game of football that this year’s FIFA struggles to match. We’re still playing the new Pro Evo and working on a full review and it’s entirely possible that problems may emerge with longer play. Yet this looks like a vintage year for Konami. Do you really want to buy FIFA instead?

Verdict
FIFA has abandoned some of the fast, furious, end-to-end play of FIFA 15 in favour of a tighter, more believable defensive game, but if that saps out a little of the fun, there’s compensation in the improved Career game mode and the more accessible Ultimate Team Draft mode. In fact, FIFA’s problem isn’t that it doesn’t play a great game of football, but that this particular version might not be great enough. With Pro Evo looking incredibly strong this year, the more conservative, authenticity-focused FIFA seems a little less exciting than it is.