Available on Xbox One (reviewed), PS4, PC, Xbox 360, PS3, PS Vita, 3DS, Wii
Some games roll around each year with the inevitability of Christmas or the X Factor. Another year, another Call of Duty, an Assassin’s Creed, another FIFA. Yet this year isn’t just like any other for the world’s favourite console football game. Most obviously, it’s the first where EA Canada has really got to grips with the PS4 and Xbox One, resulting in a mass of changes to the graphics and animation engines. Some are merely cosmetic, and some so subtle as to be almost unnoticeable, but many have a genuine impact on the gameplay.

Less obviously, FIFA seems to have moved away from the focus on ball control and the defensive game of FIFA 13 and FIFA 14, and towards a more dynamic, aggressive and – frankly – exciting style of play. If you played the last two FIFAs tired of getting mired in the midfield, bored witless by the slow, methodical pace, then you’ll probably find this year’s FIFA the best since the glory days of FIFA 12. It’s still a game built by people hell-bent on reflecting every aspect of the beautiful game, but this time they’ve remembered that FIFA can also be fun. 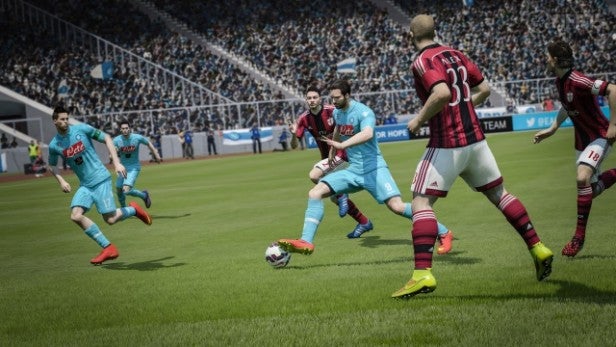 Structurally, it’s pretty much identical to FIFA 14. The single-player campaign remains dominated by Career mode, where you can take either a player or a manager through several seasons, hoping to take your team to league and tournament success, or build a fantastic national and international career.

It’s still basically a combination of the old Be a Pro and Be a Manager modes, where you roll through the season playing matches, dodging or accepting loan and transfer requests and getting the odd rollicking for your behaviour on the pitch, and as before, you can choose whether to play matches from the viewpoint of just the one player or play with the whole team. The latter will be most people’s choice, but playing in just the one position can be interesting, really making you think about where you need to be and what you need to do to make the most of every opportunity, while creating opportunities for others. 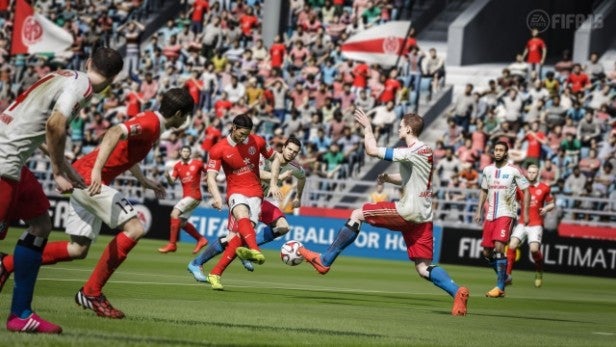 EA generally knows what it’s doing with this stuff, and Career mode remains a very satisfying way to enjoy FIFA. Rooting not just for your team but for your specific player really grounds you in the action, and the sense of victory when that player scores is all the stronger. All the same, the real heart of this year’s FIFA is – as with last year’s – Ultimate Team.

Playable both online and offline, it manages to combine your standard-issue FIFA action with aspects of a management simulator and a collectible card game, and it’s hideously addictive stuff. This year EA has also made it more accessible, and just a little more immediately gratifying. The point isn’t just collecting and adding great players to your team, but setting up synergies and links so that they’re working in the right position with team-mates they feel some affinity for. That way, you build a team chemistry that turns a group of individual stars into one unstoppable goal-scoring and protecting machine. The intro makes this more explicit than before, with a very effective mini-tutorial. 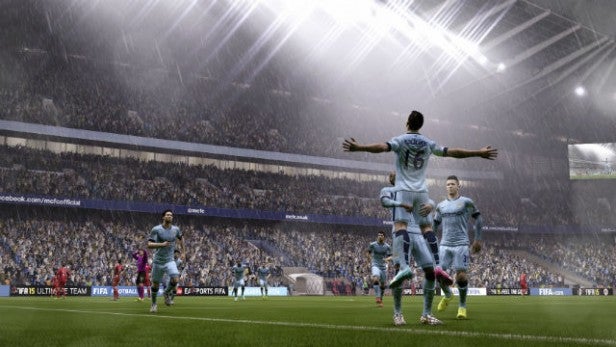 FIFA 15 also introduces temporary loans, allowing you to bring in one or more great players for a string of matches early in the campaign. This lessens the time you spend mustering a bunch of lesser players, and in our case led to a storming eight-nil victory against Bolton Wanderers that pulled us in without delay. With FIFA 15, Ultimate Team isn’t just for the more hardcore players; it’s welcoming more casual players in.

Online, there’s very little difference between FIFA 15 and FIFA 14. You can play competitively or cooperatively in seasons, join Ultimate Team tournaments or join a club and meet up for 11 vs 11 events. The action seems, on first impressions, to be smooth, with good matchmaking and plenty of scope to play how you want to play. 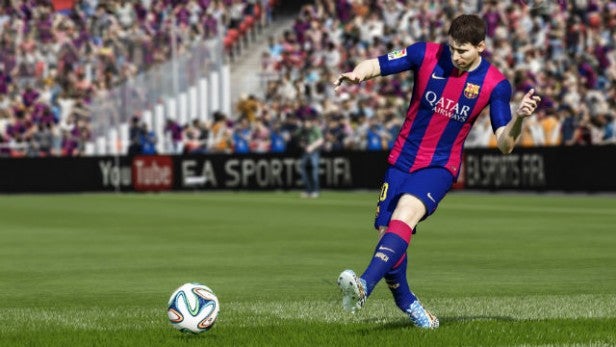 If there’s a sense of ‘if it ain’t broke’ about the structure and game modes, then it’s more than made up for by the presentation. On one level, FIFA 15 pushes the Sky Sports-inspired look and feel about as far as it can go, with superb cutaways and replays, titles, close-ups and the rest that leave it closely resembling real TV coverage. The commentary from Martin Tyler and Adam Smith is astonishingly good, particularly in the premiership, though you wonder how well the references to Manchester United’s troubles or world cup performances will date over the coming months.

On another level, the visuals are consistently impressive. Anyone who describes the players as absolutely lifelike should probably steer clear of Madame Tussauds, lest they think they’re getting blanked by the real Tom Cruise, but they’re certainly closer than they’ve ever been before. Hair now looks more realistic, the kit seems to hang from the body rather than form an integral part, and the various stadiums are magnificently detailed – at least in the Premier League. 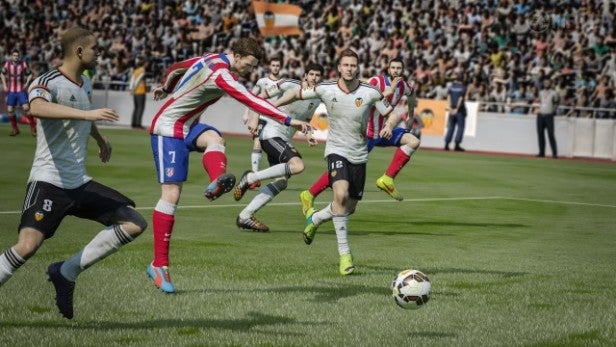 The real killer, though, is all the details. The animation is so absurdly lifelike most of the time that the odd weird or unrealistic motion sticks out like a particularly sore thumb. Rain now seems to water-log the pitch, sending up spray as the players sprint around, and covering them in more layers of grime as the game goes on. You can, however, take talk of believable emotions with a pinch of salt – the players react well to goals, missed opportunities and referee decisions, but otherwise it comes down to some players looking mildly despondent when their team is 4-0 down. FIFA 15 unquestionably looks awesome, but not everything about it is a game changer.

The gameplay, however, is. Where FIFA 13 and 14 came touting all-new defensive and offensive systems or ball dynamics, FIFA 15 arrives saying little. Play it for a few hours, however, and you’ll soon note how more fluid and dynamic the action feels. Attackers get more chances and defending is more difficult, so there’s more end-to-end activity than you might have seen for quite a while. Players seem to turn and react faster without losing the ball, and it’s easier than ever to get through to the box without relying on special tricks, though this remains a game that favours fast, accurate passing over ridiculous solo runs. 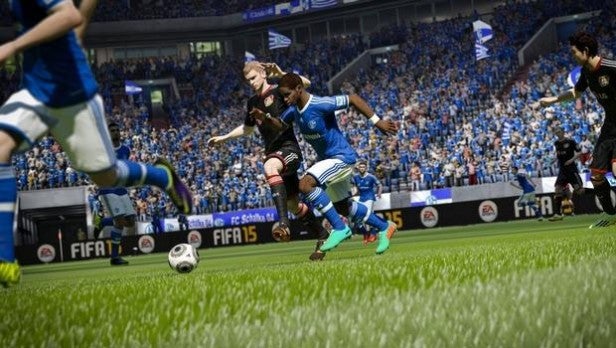 When your strikers get near the box, their biggest obstacle will be the revamped goalkeepers. Most of the time they’re fast and devilishly hard to beat, charging out to grab the ball when necessary, while not abandoning the goal when not. They can be beaten, but they put up a lot more opposition than the frequently worthless defence.

For a while everything seems perfect, but the longer you play the more the honeymoon period wanes and the more doubts start to creep in. Why is it so hard to pin down an opposing striker while they run around your box? Why is it so hard to score with a smart set-piece, but so easy to score from many angles with a stupid, low-level daisy-cutter shot? Why does the AI sometimes act so weirdly, either failing to get in a space, ignoring your opponent’s through balls or – in one memorable case – leaving two defenders and one opposing striker dancing weirdly in the corner of the pitch? Isn’t some of this end-to-end stuff, and aren’t some of these scorelines, just a bit ridiculous?

Maybe, but none of this stuff spoils the fun. And here’s the thing with FIFA: every year it really gets two verdicts, the first arriving when the game comes out and we all play it, and the second, more lasting verdict coming months later when the game and the players have settled down. In some cases (see FIFA 14) a consensus emerges that this is not a vintage year. FIFA 15, though, leaves us feeling just a tad more confident. It’s a good FIFA. With time, some fixes and some extra polish, it could be great.

Verdict
It’s not perfect, but FIFA 15 is the most exciting FIFA for a couple of years. A drift away from realistic defence towards more aggressive forward play replaces stolid midfield battles with end-to-end drama, and we still get all the great modes – including a stronger career mode and Ultimate Team – that gave FIFA 14 strength in depth. Most of all we get exceptional graphics and presentation, which make FIFA 15 look even more like the real deal on TV. There are wrinkles to be ironed out here, but this is a promising base on which a new generation of FIFA can build.