Well, we can definitively say that 2016 is without a doubt Pro Evo’s year. Konami’s football sim finally plays a more exciting, faster paced game than its EA rival. It does a much better job at capturing the true flow of the beautiful game.

While quick-thinking is rewarded and clumsy play punished, it’s the fact that the players feel responsive and agile.

Usually PES pails in comparison to FIFA when it comes to the graphics, but this year the game uses the same FOX Engine as Metal Gear Solid 5. That means superior detail, animation and lighting, which gives Pro Evo a substantial edge over its rival.

If you’re being particularly fussy, you might complain about the flat-looking grass or some unconvincing effects for footfalls on wet turf. But the players’ skin and cloth dynamics have never looked better in a PES game and the ball physics and ball animation are second to none.

All the same, the many voices acclaiming this year’s Pro Evo as a landmark football game, even the best football game ever made, might be pushing it a little. Pro Evo is this year’s champion by a margin, but it’s still not perfect. Reports that PES 2016 stomps all over FIFA or redefines the genre still need to be taken with a pinch of salt. 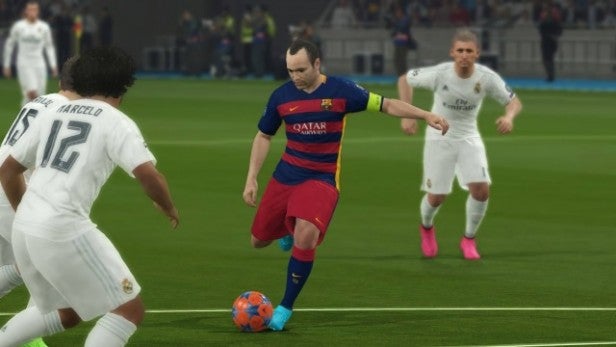 Why? It’s partly to do with issues that have always made life hard for Pro Evo and which come down to licensing more than anything else. Without the weight or war chest to compete with FIFA for licensed teams and tournaments, picking Pro Evo still means living with a range of made-up teams, and while fans might say that it doesn’t matter that you have to play London FC, Merseyside Red or East Dorsetshire instead of Chelsea, Liverpool and Bournemouth, we all know it does.

Licensing is one thing, but there is a lot of other stuff that Pro Evo could be doing better. The presentation, heavy on static screens, fiddly menus and dull tutorials, isn’t even close to FIFA standard. The Master League mode has seen a revamp that makes it clearer and more accessible, but the Become a Legend and MyClub modes remain slightly awkward, unatmospheric and obtuse in comparison to their FIFA equivalents. That’s a shame, because both modes have real depth and substance, and MyClub is steadily evolving into a very credible rival to FIFA’s Ultimate Team – one more related to real-world football than collectible card games and microtransactions. 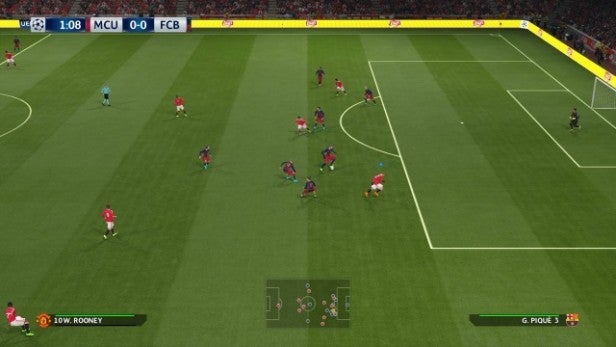 And while Pro Evo is getting better on delivering real match atmosphere, it’s still behind FIFA in key areas. This year’s commentary from Peter Drury and Jim Beglin is just about adequate when you have licensed Champions League teams on the pitch, but with other sides it’s unconvincing. It won’t take you many matches before you grow tired of the generic, repetitive comments or the failure to respond to what’s unfolding. In fact, there’s something slightly depressing about getting told that your striker has a wide open space to play with when he’s being harried mercilessly by three defenders, or getting told that the match is finished when the other team is only two goals up with thirty minutes still to go.

Yet all this stuff fades into the background when things are going right on the pitch. It’s hard to pin down exactly what Pro Evo gets so right. Is it the way that ball physics, smart controls and player interactions come together to make a more believable game? Is it the way that the virtual players seem to reflect the play styles – even personalities – of the real-world players they represent? Watch Messi, Neymar or Karim Benzema at work, and you’ll be amazed at how closely the new Pro Evo replicates the real deal in terms of pace, gait, ball control and finishing power. 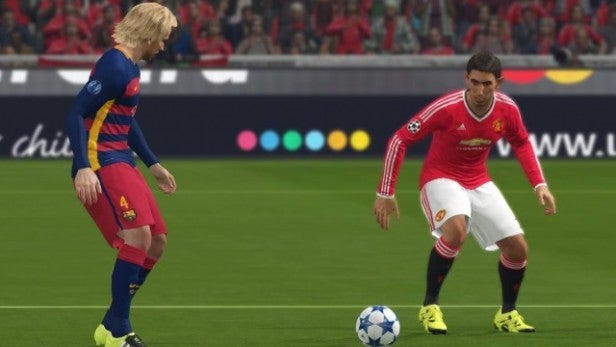 Is it the fantastic flow of the game, where passes build into waves of attack that either smash their way into the goal or ebb, crash or break on a fast-moving defence? Whatever it is, PES 2016 makes a beautiful version of the beautiful game.

Unrealistic player interactions were one of Pro Evo’s biggest failings last year, but Konami has transformed them into one of this year’s biggest triumphs. FIFA has been handling this stuff well for years, but PES 2016 takes it to another level. Watch players smash and stumble against each other, jostle for the ball, barge opponents or come in for a tackle, and they move with a substance and realism that’s eerily convincing and not at all pre-baked. Interactions with the ball are also more dynamic and slightly unpredictable, making each attempt to catch a fast, soaring pass or connect with a loose ball a thrilling moment. Who knows what kind of analysis and hard iteration went into making this all look so simple and so lifelike, but it’s the biggest area where Pro Evo surges ahead. 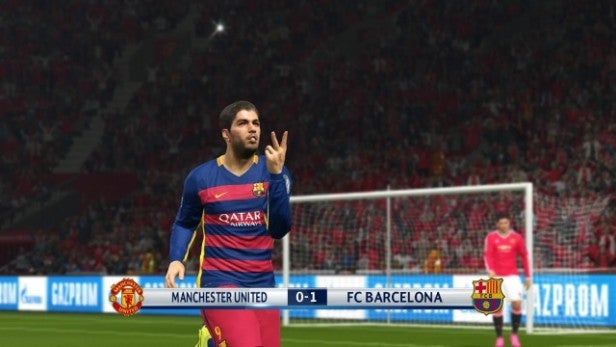 True, Pro Evo’s zoomed-out view doesn’t quite match FIFA’s for crisp detail, but the combination of that animation and the superb rendering of skin, cloth, hair and lighting in the close-up views more than makes up for it. In stills, Cristian Ronaldo, Luis Suarez or Lionel Messi might look more realistic in the EA Sports game, but in motion its Konami’s versions that are more convincing, with more human expressions and movements and less weird, uncanny valley robot stares. The weather effects are pretty good as well, with rain having a clear impact on stopping distances, slides and the pace of the ball.

All the same, Pro Evo isn’t perfect. In fact it’s weakest where the new FIFA is strongest: On defence. Sometimes the AI seems incredibly tight, while at other times its woeful. Sometimes nobody scores for 90 minutes, while other matches transform into ludicrous end-to-end goal fests. FIFA’s defence is far more consistent, its positioning and tracking of enemy strikers so much smarter. While this makes for a less flowing and sometimes more frustrating game, it also leads to fewer situations where the scoreline reaches levels that make grown Brazillians cry. 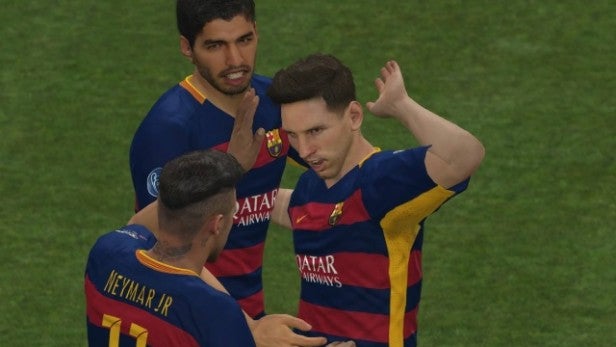 Yes, it’s possible to argue that goalkeeping takes more skill in Pro Evo, or that this is a more accurate reflection of the abilities of different goalies, that won’t make you feel much better when yours lets in cheap shot after cheap shot, losing you the match. Nor will you feel cheered up when the useless git allows shots that might be best described as speculative to roll at no great speed across the line. Sure, you won’t complain so much when you’re on the striking end, nailing goal after goal against a poor online player, or weak AI, but if PES 2016 has any serious gameplay issue, this is it.

Luckily, it’s not game-breaking. Play as the world’s top sides and the goalies are stronger, and even with weaker teams you can work around it, taking more control of your goalie rather than leaving the AI to handle things for you. And when Pro Evo is good – which is most of the time – then it’s so very, very good. At it’s best, it’s almost as brilliant and enthralling a game of football as its more fanatical fans claim.

Pro Evo is still struggling to match FIFA on match atmosphere, presentation, accessibility and commentary – all areas where Konami could and should be doing better. Yet it’s a fantastic football game once you hit the pitch, with brilliant close-up graphics, superb animation, convincing ball physics and player interactions and a fantastic feel for the ebb and flow of the match. It still has issues with defence and goalkeeping, but if you want guts, adrenaline and excitement in your video game footie, this year’s Pro Evo is the one to buy.