Available March 27 on PS4, Xbox One and PC

Every Far Cry begins with an escape, and Far Cry 5 is no different. However, here there’s a sense that it’s not just our hero, the Deputy, who’s escaping Eden Gate’s cult maniacs, but the series trying to escape its limitations. Far Cry 5 is running both from the ghosts of Far Crys past and the even more terrifying spectre of the ‘Ubigame’ – that cynical internet theory that all Ubisoft games are essentially the same.

It’s a theory that won a lot of supporters after Ubisoft released an endless stream of near-identical open-world games that followed the same tired format: climb towers, take over territories, repeat. 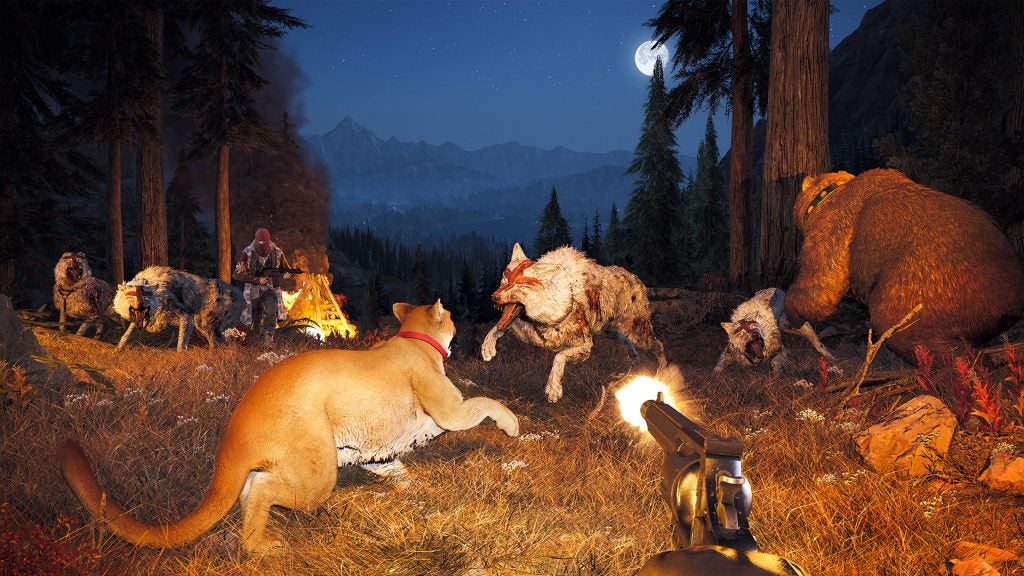 Ubisoft’s studios seem to have taken these criticisms to heart. First it made sweeping changes with Assassin’s Creed Origins – the freshest game in the series for years – and now Far Cry 5 attempts to similarly move on. And it’s mostly successful. Where Far Cry 4 sometimes felt like a next-gen reworking of Far Cry 3, Far Cry 5 has its own distinct feel.

That’s partly down to the setting. Where the previous games explored more exotic African, South-East Asian and Himalayan landscapes, this one is a journey into the rural North West of America and the heartlands of the militia – with a touch of the Bible belt on the side. You’re still gunning down generic goons by the dozen, but this time they’re crazed doomsday cultists from a weird pseudo-Christian religion led by four charismatic siblings.

The key words here are organic and immersive. Out goes the mini-map and all those icons, though you’ll still spot indicators on the compass at the top of the screen. Out, too, goes all that climbing-towers business. You’ll discover missions and activities because you happen to come across them, or because one character that you meet will send you in the right direction, not by climbing to a higher viewpoint. Comparisons to Legend of Zelda: Breath of the Wild are a bit excessive – Far Cry 5 isn’t that radical a departure – but there’s something of that game’s commitment to unfolding action, where you’re driven more by curiosity than an endless to-do list of stuff. 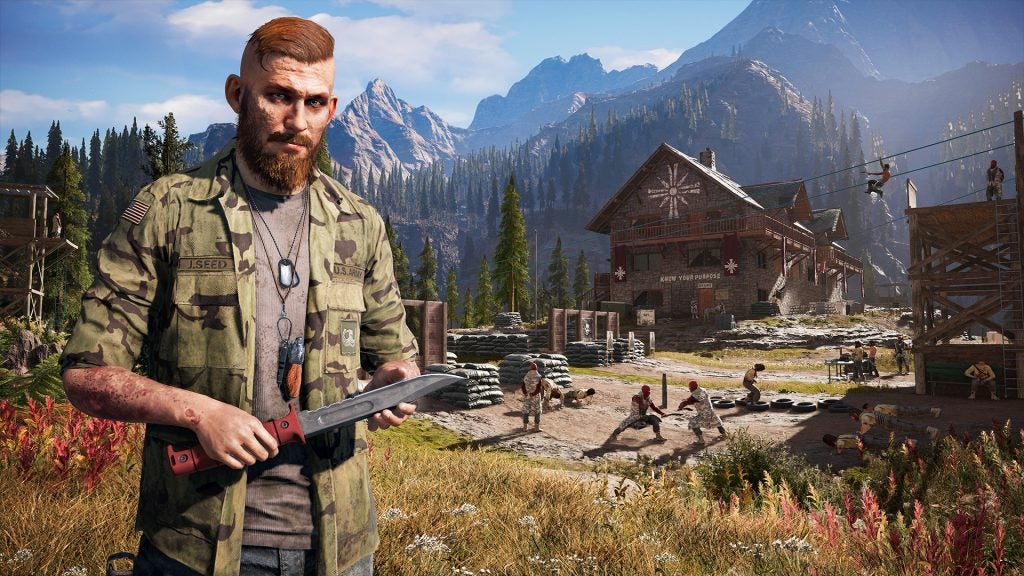 There are changes afoot in the wider structure, too. Where the previous two Far Cry games have been cat-and-mouse battles against the forces of one major antagonist, Far Cry 5 gives us three villains – John, Faith and Jacob Seed – spread across three regions of Hope County, with the fourth, Joseph, steadily coming into play.

Joseph Seed might be the game’s central villain, but don’t dismiss his three heralds out of hand. They’re not just bosses to be battled, each defines a region and the events and forces you’ll encounter. Each of their homelands has its own personality, its own landmarks and its own signature enemies, and your fight against each herald runs through several interesting arcs before a cathartic final encounter. You’re free to focus in on one or keep switching between two or three ongoing dramas – the choice is yours – giving Far Cry 5 a variety that the series hasn’t always had before.

And beneath all this there’s something interesting going on here. Much has been made of Far Cry’s move to rugged Montana, but Ubisoft has made it a strange and unsettling mirror of modern America, where ordinary folk become heroes and craziness lurks around every corner. For all its gung-ho action, sandbox ultraviolence, kooky characters and Rockstar-style satire, Far Cry 5 is a game with something to say, even if it isn’t always clear quite what that is.

Perhaps it’s sometimes too careful about saying it, cautiously balancing its doomsday cultist villains with stout-hearted and patriotic militia who, while they might sound a bit nutty, always have their heart in the right place. But while the characterisation isn’t always subtle, there’s a roundedness to the cast that makes you feel there’s more at stake than simply blowing shit up. This is a more reactive world than Kyrat, where part of your reward for tackling the Seeds and their Project at Eden’s Gate followers is watching your fellow citizens rise to resist them and ordinary life re-established. Where Far Cry 4 was much more morally ambiguous, Far Cry 5 makes you feel like a force for good. 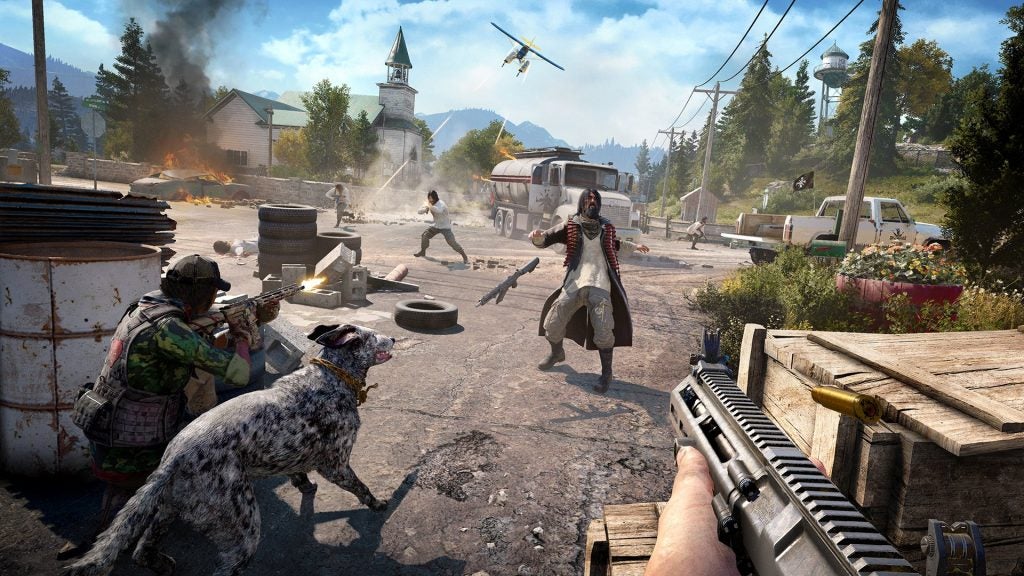 It’s almost unnecessary to say that this is a beautiful and intricately detailed open world, with its own busy ecosystems and vibrant characters, but we’re going to say it anyway: it’s an incredible place to explore. Play Far Cry 5 on the Xbox One X, and the stunning mountain scenery, lush vegetation and atmospheric volumetric lighting create some truly breathtaking vistas, not to mention some impressively spectacular firefights when all hell breaks loose.

Underneath all this, however, there’s still a sense that the deviations from the Far Cry template only go so far. Some of the mission design is excellent, particularly when there’s a key set-piece to be played out, but there are still a lot of repetitive activities that need to be completed before you can draw Joseph or his heralds to make their next move. You’ll still spend a lot of time assaulting and taking over cult outposts, attacking cult convoys, destroying roadblocks and silos or rescuing innocent citizens from cult abductions. The flow of the action is more organic – you might have an idea where you’re going, but you inevitably get side-tracked – but a lot of your minute-to-minute activities will still be familiar from past games.

On the plus side, the action has never been as open to different approaches, or as strong. Stealth now works as an option and is actually the best route through some missions, where charging into battle gets you killed. And while it takes time to get used to Far Cry’s aiming, which lacks the fluid motion and snap of a CoD or Destiny 2, everything else – a varied arsenal, the limited ammo, the smart, unpredictable AI – makes this the most satisfying Far Cry in terms of combat yet.

Far Cry’s handling of allies has evolved nicely, with Ubisoft bringing in the specialists and animal companions from Far Cry: Primal. Ordinary citizens can be recruited as footsoldier allies and earn new abilities as they level up. Completing specific story missions will also unlock specialist warriors, some providing sniper support with bows or rifles, others air support through strafing runs and bombs. Best of all, you’ll unlock ‘fangs for hire’, with critters like the dog Boomer, who’ll sniff out enemies and attack them, or the cougar, Peaches, who has a nice line in silent stealth attacks. Each specialist gives you new tactical options and can revive you if you’re downed – and it’s worth your while doing the same for them. 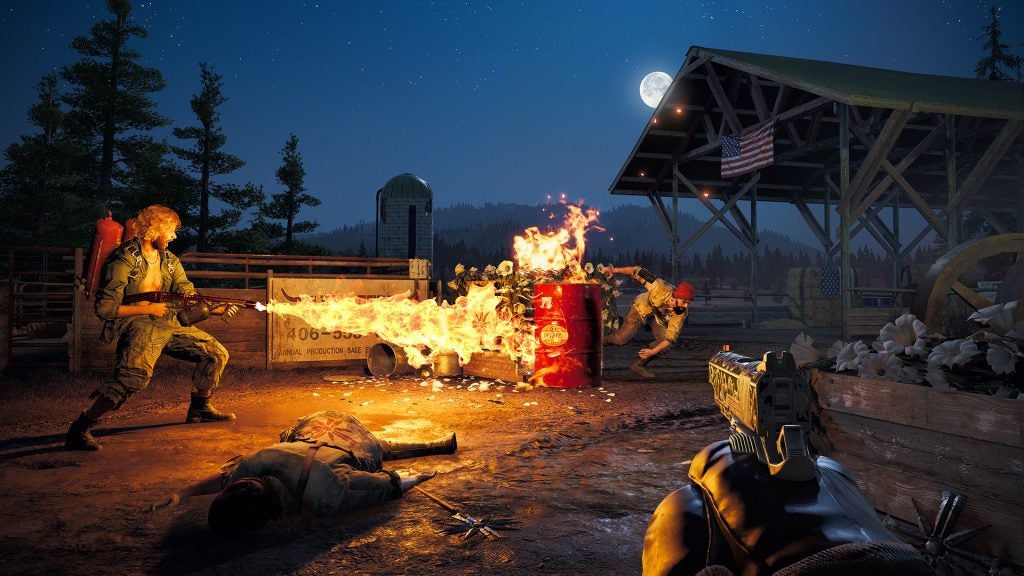 There’s also a lot of fun to be had with vehicles, with the usual jeeps and ATVs joined by muscle cars, machine-gun toting juggernauts, weaponised tractors and a whole lot more. There are some brilliant stunt-racing challenges squirreled away as well, and Far Cry 5 still finds time for the grapple, parachute and wingsuit, so all those helicopters and radio towers won’t go to waste.
By any standards, this is a fantastic sandbox shooter – the most engaging and absorbing in an always stellar series. Yet it’s no coincidence that it’s at its best when the Seeds themselves enter the fray. Where Joseph is an unsettling, quietly enigmatic presence for much of the game, his three heralds punctuate the action with regular shots of pure craziness, and it’s here where Far Cry 5 cuts loose with its most disruptive, subversive passages.

Where John pushes you through increasingly gruesome confrontations, Jacob hits you with surreal, brainwashing training challenges and Faith tempts you away from your hero’s journey with soft talk that leads you into madness. While some scenes of violence and torture grow excessive – I sometimes wondered how much brutality as entertainment I could stomach – these sequences do a fantastic job of focusing the action and driving you forwards. In fact, you could argue that they do it too well.

Related: How Ubisoft built the Project at Eden’s Gate 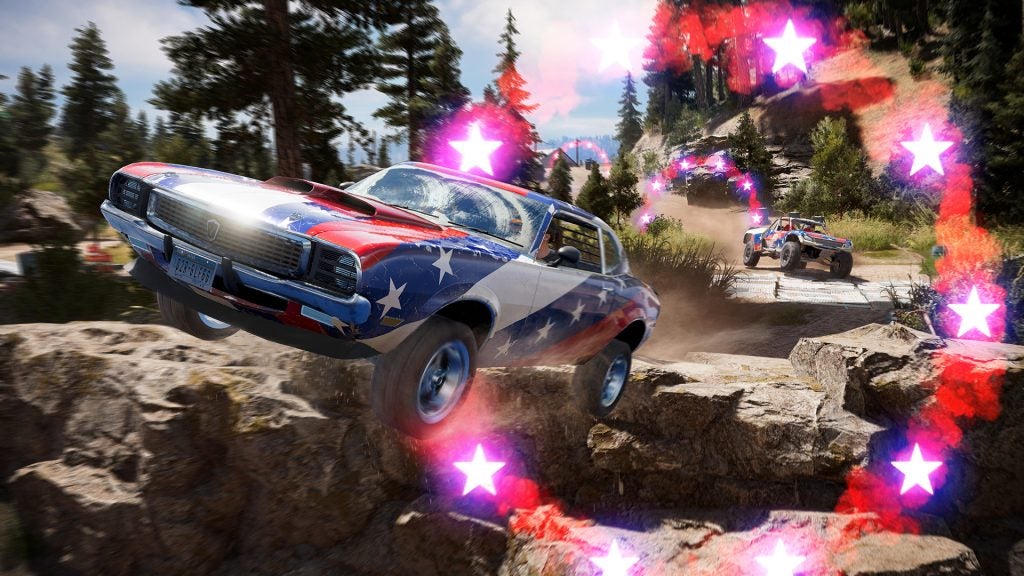 Maybe it’s impossible to maintain that level of nerve-wracked, strung-out intensity over so many hours of freeform gameplay in such a vast open world, but the return to normal busywork missions can feel deflating. What’s more, how many times can one guy get hunted, caught and rescued? Yet, overall, Far Cry 5 finds a balance between its more compelling narrative and its all-action smorgasbord structure. At every point where you start to grow weary of the mundane, something comes along and knocks you off your feet. That’s important, because this is a massive game. Expect a good thirty to forty hours of action before you see the credits roll.

It is, of course, both playable and hugely enjoyable in co-op, but Far Cry 5 throws in something new to keep you coming back once that happens: Far Cry Arcade. An evolution of the old Map Editor, it enables you to build your own solo, co-op and multiplayer missions, or at least play through those that others – including Ubisoft – have built. The editor itself is fairly complex and will take a while to master, but some of the ready-made maps are fun, with some interesting puzzle-style challenges. These arguably suit Far Cry’s style better than the PvP Arcade mode, though this might grow stronger should the maps grow more inventive and the player count rise. 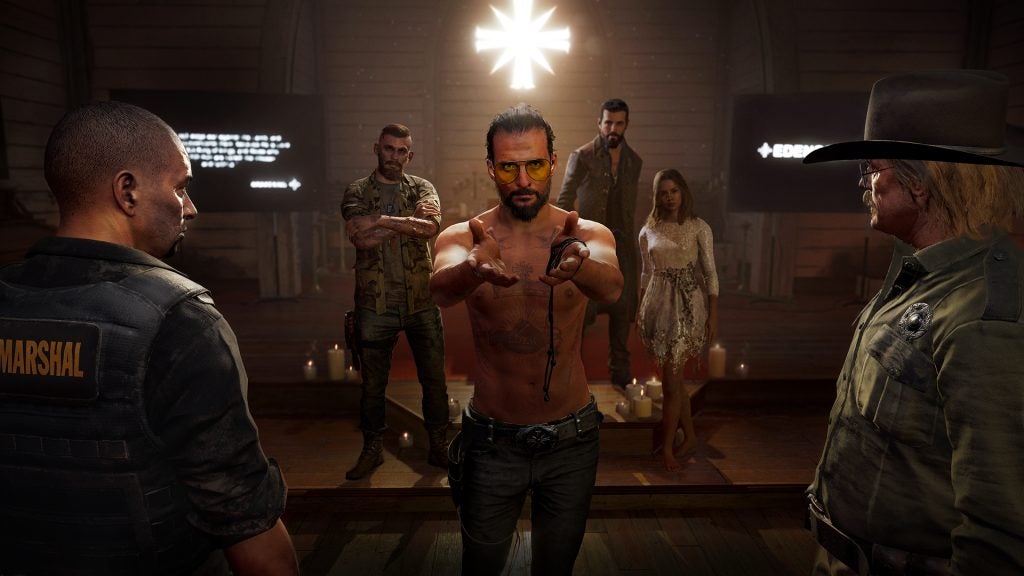 Does Far Cry 5 escape the Ubigame shadow? At its best, it does tear itself free, with some systems stripped away and others streamlined, plus a greater sense of immersion and discovery than the series has had in years. The Seeds make great Far Cry villains, disrupting the flow when it threatens to grow dull, and there’s something familiar and unsettling about the Montana setting that brings the whole game to life.

Yet there’s still a sense that Far Cry needs to push things further, with too many mundane and repetitive tasks littering its map screen, and that more variety is needed in its core mission design. This is a phenomenal open-world shooter and an excellent Far Cry. With a little extra push, it could have been even more.